elcome back to the Lab. Ahh... another non-theme week to sink into. For the sake of my personal organization scaffolding, I like to set up quasi-themes for these weeks, even though I'm technically free to discuss any aspect of Dark Ascension. As long as I don't step on my own toes and bury a future theme week.

Fortunately, this site has already had Transformation Week, so I think I'm comfortable spending today's article on the innovative cards with two faces in Dark Ascension. There's a lot to like among the new crop. The mechanic allows for a fair amount of story scribing, as evidenced by cards like Loyal Cathar and Chosen of Markov, which tell horrific tales. 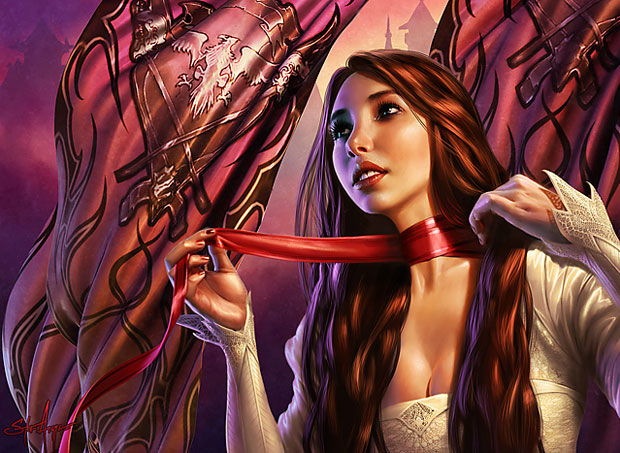 Chosen of Markov and Markov's Servant | Art by Steve Argyle

Meanwhile, I'm delightfully tripped out by cards like Soul Seizer and Elbrus, the Binding Blade, as they transform into different types of cards. The latter is undoubtedly one of my favorite cards in the set, with the ability to flip into one of the gnarliest fatties in Magic history. I would devote a section to the legendary Equipment, but instead I'll go with a sentence, which sometimes is all I need: Quest for the Holy Relic, along with a plethora of Memnites and Glint Hawks.

As for the others, well, that's what the rest of the article is for! Let's examine some more of these sun-and-moon-symboled cards.

Chalice of Life is another of these new transformers, and a really exciting one to boot. Get to 30 life and the sudden reward is a beatstick of a card, Chalice of Death. Tap to have someone lose 5 life? Sounds susceptible to abuse, especially through untapping effects. 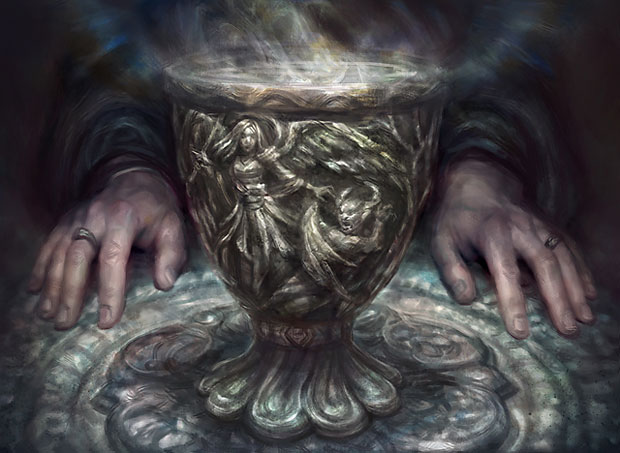 Chalice of Life and Chalice of Death | Art by Ryan Yee

One initial deck-building clue I had was that Chalice of Life was an artifact. If I wanted to use Voltaic Key-type tricks, I might as well seek my lifegain through other artifacts. Pristine Talisman was exactly the sort of thing I was looking for. Others I turned to were Trigon of Mending and, happily, Druidic Satchel (first use of the flavorful M12 in the column!). It was around this point I decided to eschew the Key in favor of Unwinding Clock, a decision similarly bent around its personal lack of Lab experience. The Clock can basically double your turns, giving you an extra untap of Chalice of Death or the lifegain artifacts. Fabricate finds all this stuff, by the way.

I figured this deck would lean toward the controlling end of the tension spectrum. Aven Riftwatcher is prepared to tangle with any attacker, and with a dose of 4 life, it fits with the plan. Timely Reinforcements was an ideal position restorer and potential shot of 6 life. And a full set of Absorb only punctuates things.

The land base is tuned to the deck's aims as well. Sejiri Refuge and Kabira Crossroads add helpful inches. The artifact lands are nice with Unwinding Clock, effectively turning on a Trigon or Satchel in that situation. And Tolaria West can find Academy Ruins, the legendary shores upon which broken Chalices always wash up.

To fill out the last lingering slots, I went with Staff of Domination, a literally do-it-all toy for Fabricate to find, and Phyrexian Metamorph, which can come down as a Chalice of Death twin and thin your opponent's air severely.

Now it's time for Ravenous Demon. Just take a couple of seconds and examine this card, and both its sides. Gruesome, no? Now factor in Magic's interesting history with Demons. For seven years, Magic was unwilling to print any more Demons, after iconic but twisted cards like Lord of the Pit and Demonic Tutor made the rounds as casual phenomena. To read the full story, I'd advise reading Mark Rosewater's article on the issue. Now, ten years after Grinning Demon ended the hiatus, Ravenous Demon shows up and is basically one of the more "evil" cards in the game. 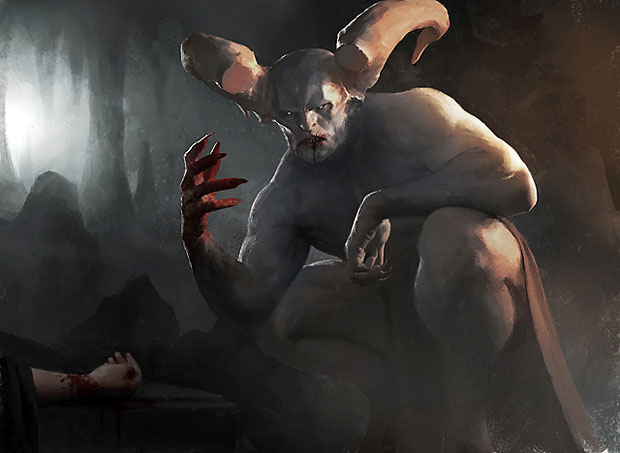 Ahem... to deck building! Ravenous Demon is one of the niftier riffs on Lord of the Pit, exceeding even Xathrid Demon in my opinion. The key factor is obviously the dual faces. After casting Ravenous Demon, you have it eat a Human on your next turn, thereby getting in there with a 9/9 flying trampler without yet withstanding its tyrannical upkeep cost.

Are there any other monsters that like to snack on my blood and bones? Sure! Falkenrath Aristocrat is a speedy but brutal weapon. Indestructibility is always nice as a removal deterrent, and the extra +1/+1 counters are welcomed. And Fiend of the Shadows works wonders as a cross between a traditional Specter and Praetor's Grasp, with the occasional slurping up of a Human for regenerative purposes.

I'll need a bunch of Humans, of course. Gather the Townsfolk and Increasing Devotion provide a bunch of my comrades, as well as Thraben Doomsayer, who helpfully churns them out as well. These tokens will probably be betrayed at some point by fellow Human, Skirsdag Flayer, who in Innistrad's troubled times has pledged himself fully to demons. In a pinch, the Flayer will willingly oust himself to solve problems.

Other Humans that made the deck were Weathered Wayfarer (fulfilling both a one-drop slot and a mana-fixing slot, since this is a three-color deck, after all), Stun Sniper (a really underrated uncommon from Alara Reborn, this Human kills weenies and stymies fatties), and Undertaker (getting your fallen monsters back is nearly always a good plan). Village Cannibals is bound to get huge over time with all the carnage. And, for a singleton, I thought to myself, "Are there any Humans that just want to die?" Turns out, Homura, Human Ascendant does. The red member of one of my favorite cycles ever, Homura's Essence is definitely something you want to bolster your forces.

Finally, Huntmaster of the Fells. This card has everyone's attention at this point, and that's not just because of its tournament virtuosity. Its delicately phrased back-and-forth interplay rips the lid off of an effect smorgasbord. My radar for weirdness perked up in a scatter of beeps upon scanning this guy. 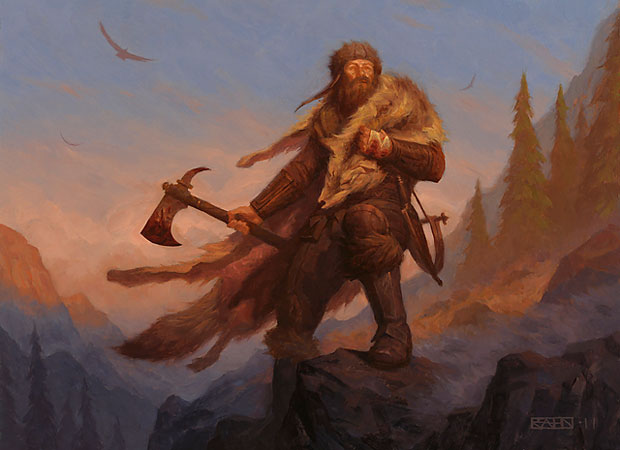 While figuring out how to blow the Huntmaster sky-high, I received an email from combo veteran Steffan Hagen, who shared his fun list with me. He opened with the following line: "...I wonder if anyone else noticed that you can imprint Moonmist on Isochron Scepter—and that this actually has utility now thanks to our new Werewolf superstar?"

Ooo. Moonmist on a Scepter means you can always flip over a Huntmaster. Pity you can't for the Ravager side... or can you? Steffan came up with Unnatural Selection. Now there's potential for, as Steffan put it: "...setting up infinitely transforming Huntmasters, which should get overwhelming pretty quickly."

Another piece used in the list was Ludevic's Test Subject. With Unnatural Selection around, a Moonmist could bop that egg into a 13/13 trample monster on turn three! Even without creature-type hackery, a Moonmist can still benefit other Werewolves like Scorned Villager and Mayor of Avabruck.

Steffan closed his comments with some final remarks on the deck's pieces: "With two multi-part combos, Gifts Ungiven seems a natural fit, and thus Eternal Witness, which can also get back Moonmists you burned in early defense. Phyrexian Metamorph can't transform, but it sure can copy transformed Test Subjects and Huntmasters... and be brought back by the random Academy Ruins, which is there for Gifts and to win attrition wars."

4 Huntmaster of the Fells
60 Cards