ello all, and welcome back to the Lab. This week happens to be Multiplayer Week, a week fully dedicated to playing our favorite game with at least three people. Of course, this number could be four, or seven, or even eleven (I've seen giant games from each number of players.) It's the beauty of Magic that allows the game play to remain just as stimulating and exciting in a larger environment of players.

Not only is multiplayer fun, it's made up of hysterical banter, table politics, and amazing plays. Whereas you can simulate a duel (one-on-one Magic) through Magic Online and capture the same experience of playing face to face, the same cannot be said for multiplayer. It's a style of play that demands human contact for often hilarious and thrilling results. In short, multiplayer is awesome. 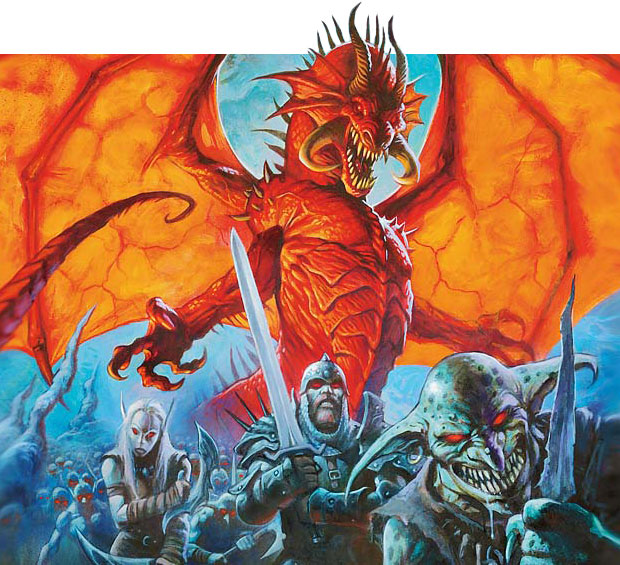 A year ago, we as players had only our imaginations to create various formats of multiplayer. EDH, Emperor, and the absolutely brilliant Respawn Magic (coined by this site's editor Kelly Digges.) Now, we have two new and amazing formats to indulge in: Planechase and Archenemy. Each holds up incredibly well and produces tons of fun for all.

Imagine three circles in your mind, okay? Imagine each circle was made up of three players, and that each circle of three was playing a game of Multiplayer Magic. Simple enough, right? 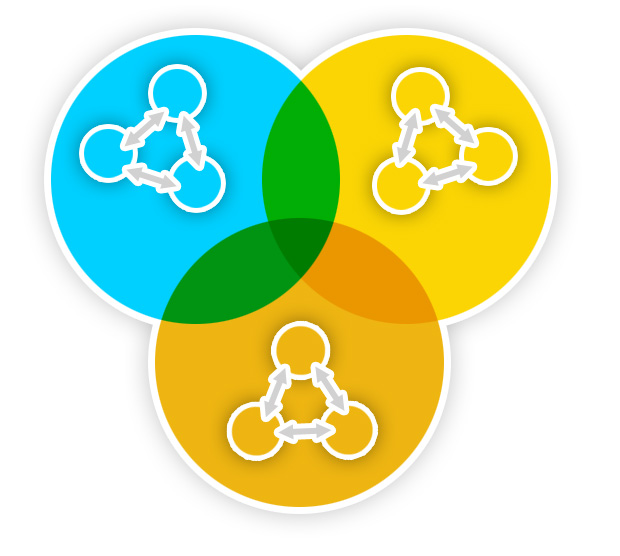 Now imagine that the three circles were arranged in a triple Venn Diagram. To be clear, this shape doesn't affect actual game play, but it helps to form a mental picture of what exactly happens after the games.

Meanwhile, each original circle now contains two players. If you keep picturing the triple Venn Diagram, you'll see three intersections surrounding the inner circle. Use these three intersections to have these players 'cross over' and play one another. Basically, each duel shifts opponents, so instead of Tom and Bill battling in Circle A, Tom instead plays Carl from Circle B, while Bill plays Tim from Circle C, and the remaining members of Circles B and C play each other. These battles take place in the three intersections. 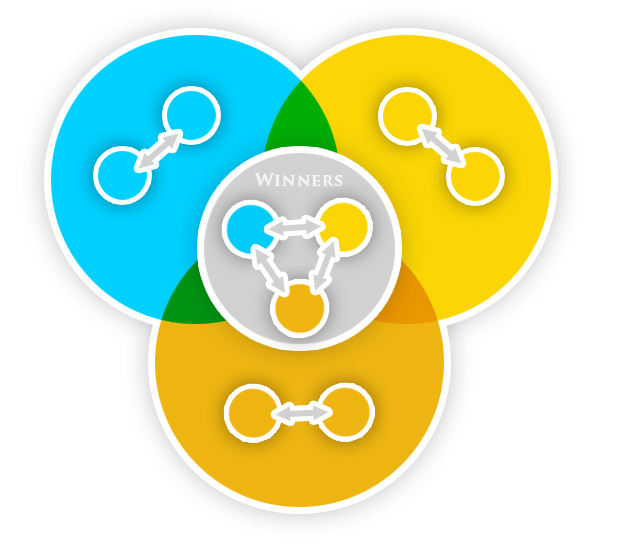 When the dust of all these battles settles, you'll have four players left: The triumphant victor of the inner circle, and the three victors of the intersections orbiting him. You could end it there, I suppose, but my original ending for this format is a final game of Archenemy! At this point, each player reshuffles their deck and replenishes their life totals to 20 (not carrying over resources, unlike from before.) The victor of the inner circle then gets a scheme deck of 20 cards and becomes the archenemy, while the three orbiting players team up to take him down.

This ending could be seen as overkill, but it was actually the inspiration for the Venn Diagram part. I thought, "How could a huge, epic game smoothly progress to a one vs. three Archenemy throwdown?" I worked backwards from there. I was also inspired by the "Ultimate Format" that I featured a couple weeks ago, which makes all my formats today look like Speed Magic.

I was thinking about cards that are just plain fun in multiplayer, and thought of cards like Eureka and Incoming! It wasn't until I thought of Hypergenesis that I had a great idea for a format. This format involves an alternate win condition, and is inspired by numerous time travel related stories. Any number of players can start out the game. 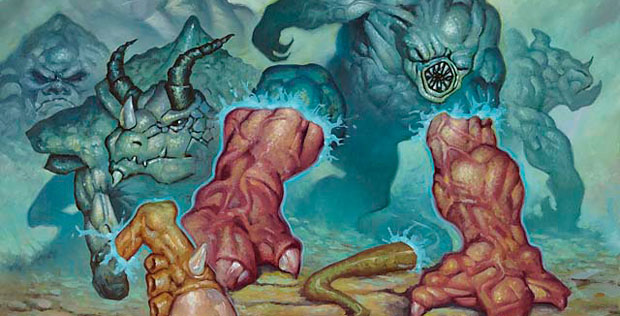 Before the game begins, each player removes four nonland cards from their deck, shuffles them together, and places them in a pile next to his or her graveyard. This is each player's "future pile." Each card must have a different title: You can't put all four Lightning Bolts in your future pile.

The game begins like a regular game of Free-For-All Magic. Each player develops their board and begins to play. At the end of every fourth turn (when each player has taken their fourth, or eighth, or twelfth (or so on) turn) each player reveals the top of his or her future pile and casts that card without paying its mana cost. This action cannot be countered or prevented in any way.

The game then resumes the turn cycle, except that each player now either has a permanent from the future on the board or has cast a non-permanent instant or sorcery from the future. If these "future cards" would leave play or go to the graveyard or be exiled, they are instead shuffled back into your library. This is where the alternative win condition comes along. The goal now becomes: to honor the self-fulfilling prophecy and find the future card again (through drawing, tutoring, or something else) and cast it.

When you cast the future cards again, instead of entering the battlefield or going on the stack, they go to the bottom of the future pile. In effect, you're sending the card back in time, completing the self-fulfilling prophecy. The player's task, while still playing Magic, is to send all four future cards "to the past," getting them back to the future pile. The first player to send all four back in time wins the game.

Of course, among all these time-hopping shenanigans, you're still playing Magic, and that's where multiple players make things interesting. Your future cards can be anything: A giant win condition, a global effect, or an answer to absolutely anything on the board. If you reduce a player's life total to 0, of course, they lose, which means players have to think about regular Magic and time travelling.

Here are some nitpicky sub-rules. Future cards can't go back in time twice; once you put a future card back in the future pile, you're done with that one and it won't come back on the next fourth turn. Also, it's okay if you have other copies of your future card in your deck. Any copy of the future card can qualify as the one you send back in time (which raises some intriguing paradoxical questions, of course, but I'm saying it's okay.) So if your future card is a Lightning Bolt, which is cast for free and gets shuffled into your library, and you happen to have another copy of Lightning Bolt in your hand, you can cast that and put it in the future pile. 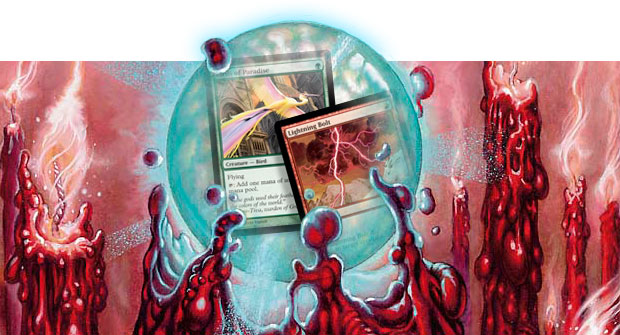 This last format is straightforward in concept but exciting in action. You start out with any number of players, and begin the game playing Free-For-All Magic as you all would normally. However, after every two turns (or one turn for more insanity, but right now let's just go with two), each player stands up and moves clockwise, taking the deck, hand, graveyard, life, and permanents of the person to his or her left. In effect you've swapped minds with that player. 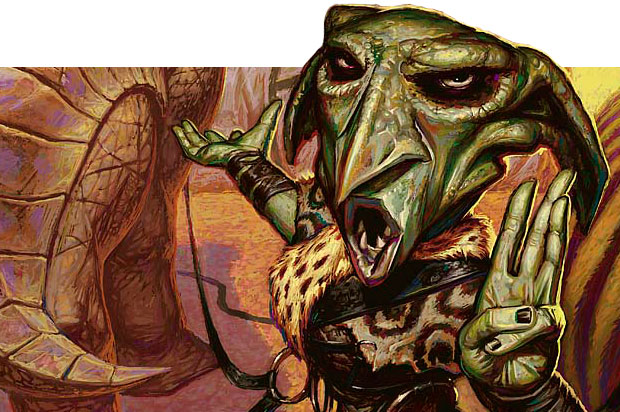 The key rule is: You can win with any deck. You don't have to end up in your own mind to win; you can do it from anyone's. Thus, it's interesting to see the battlefield prosper with the minds constantly swapping. When a player is knocked out, that mind and that library goes.

This is cool enough, but I've added some neat quirks. I wanted to give players the potential to go into anyone's mind in the middle of game play, instead of just after every second turn. So here's the rule for this format: If you could ever target a player (cast a spell or activate an ability with 'target player' in it) you could choose to ignore the effects of that spell or ability and instead, swap minds with them. For example, if you wanted to, you could cast Lightning Bolt targeting another player, and instead of them taking 3 damage, you could choose to swap minds with them. That player would then finish your turn, and you'd be behind another library. 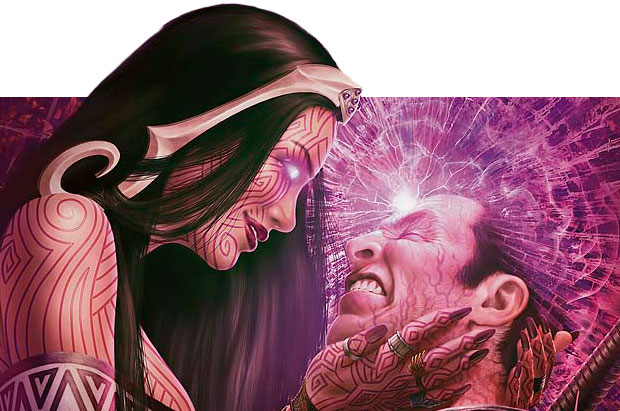 The other neat quirk is with planeswalkers. As flavorful equivalents to players, I wanted to get them in on the action as well. The concept of loyalty means they are loyal to the player who pulled them from the Blind Eternities. For the purposes of this format, I'm going to say they intricately know which mind cast them, not which deck. In shorter words, if you control planeswalkers, they follow your mind around; they, like you, go to the next battlefield. So to sum up both rules, if you control a Liliana Vess, and activate her +1 ability, you could choose to switch minds with the targeted player (instead of having him or her discard) and Liliana would follow you.

I hope you like all these formats, and feel free to customize them as you will. Add Planechase! Make all the decks EDH! Play Two-Headed Giant with Mind Swap Magic and let opposing teammates swap! Hopefully, as always, I got your mind churning with ideas! Until next time!