elcome to the Lab, friends! Today I have the pleasure of helping kick off Theros previews, and I've got a sweet card to share with you all. I know most of you are just going to scroll right down to it if you haven't already, so without further ado, I present to you Artisan of Forms. 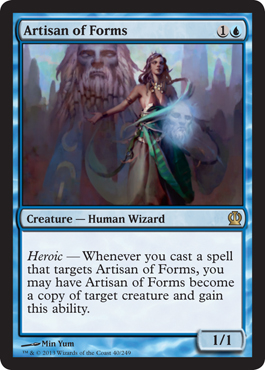 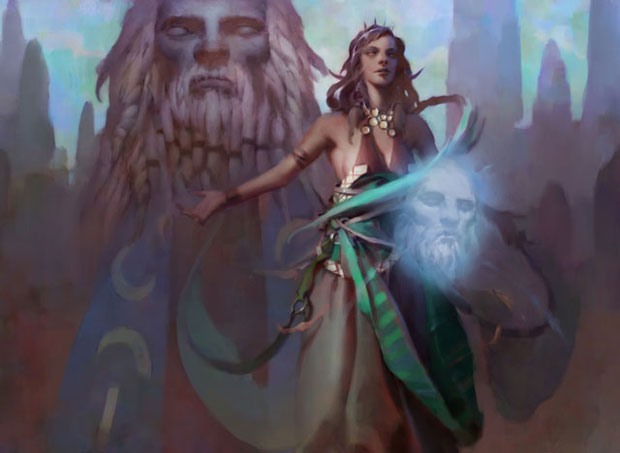 The first thing that occurs to me when I look at this card is that it's the exact opposite of Phantasmal Image. Both have the ability to copy things, but Phantasmal Image will die if it's targeted, whereas Artisan of Forms needs to be targeted to use its ability. Although the Artisan doesn't come pre-packaged as a copy of another creature, it does allow you to change your mind about what creature you want to copy later on. Since it only costs two mana, the ability to change it again and again as larger and more threatening creatures enter the battlefield is quite valuable.

There have been other Clones that can switch from one creature to another in a number of different ways. Vesuvan Doppelganger and Cryptoplasm both do it at the beginning of your upkeep, and Sakashima the Impostor returns itself to your hand. Artisan of Forms, however, can copy another creature at instant speed, opening up some interesting possibilities. Unlike most Clones, it doesn't copy another creature right away, so you don't get any "enters the battlefield" abilities that creature might have. Normally, this is a drawback, but with Artisan of Forms, it's not difficult to turn it into an advantage.

Throughout Magic's history, there have been a number of very large, inexpensive creatures with some sort of drawback. The most famous of these is Phyrexian Dreadnought. A 12/12 with trample for only one mana is enormous, but the drawback is equally large. If you don't sacrifice 12 power of creatures when it enters the battlefield, you'll have to sacrifice the Dreadnought instead. With Artisan of Forms, however, you can deftly skirt around this ability. When Phyrexian Dreadnought enters the battlefield, its ability will trigger and go on the stack, at which point you can target Artisan of Forms and have it become a copy of the Dreadnought. When the Dreadnought's ability resolves, you can sacrifice it and still be left with your 12/12 Artisan.

Waning Wurm is another large creature with a heavy drawback. Thanks to vanishing, it will usually only be able to attack once before dying. However, if Artisan of Forms becomes a copy of it, you can keep it forever. It will still have vanishing, but there won't be any counters to remove, so the ability that forces you to sacrifice it when you remove the last counter will never trigger.

The last big creature I'll be using is Shah of Naar Isle. A 6/6 with trample for four mana is very powerful, but the echo cost of allowing your opponent to draw three cards often isn't worth it. If Artisan of Forms copies it, however, the echo cost will never trigger, so long as the Artisan didn't enter the battlefield that turn. You'll be free to sacrifice or keep the original Shah as you see fit; meanwhile, Artisan of Forms will be busy attacking for 6.

Of course, none of this will happen without a way to target Artisan of Forms at instant speed. After digging through a few options, I settled on Defy Gravity and Artful Dodge. Both cost only one mana, and both give the Artisan evasion for a turn to go with its new beefy proportions. They also have flashback, allowing you to easily copy another creature later or simply make sure the Artisan gets in for those last few points of damage. Imagine you cast Artisan of Forms on turn two, then on turn three cast a Phyrexian Dreadnought and cast Artful Dodge on the Artisan to copy it. You can attack for 12 unblockable damage that turn and flashback Artful Dodge the following turn to finish off your opponent.

Since you can't really rely on drawing Artisan of Forms every game, I threw in another creature that can fill a similar role. Dimir Doppelganger can copy creatures in graveyards. Since all of your giant things sacrifice themselves, getting them to the graveyard is easy.

Impulse helps you find the cards you need, allowing you do dig through the top four cards of your library and select whichever one you want most. Forbidden Alchemy does the same for one more mana, but it has the additional bonus of putting the rest in your graveyard, giving you a creature to copy with Dimir Doppelganger or a spell to flash back on Artisan of Forms.

Artisan of Forms is quite good at taking advantage of creatures that aren't around for long. Another way to use this ability is with cards like Through the Breach. It can put any creature onto the battlefield, but forces you to sacrifice it at the end of your turn. With Artisan of Forms, you can get another copy to keep after the original dies. Of course, with the ability to put any creature onto the battlefield, there's no reason not to use one of the biggest creatures of them all: Worldspine Wurm. By putting Worldspine Wurm onto the battlefield with Through the Breach and copying it with Artisan of Forms, you can attack for 30 immediately. The Wurm's indestructible cousins, Darksteel Colossus and Blightsteel Colossus, can serve as backups in case you don't draw it, while Sneak Attack can fill the same role as Through the Breach.

Once again, however, we need some good ways to target Artisan of Forms. Since Through the Breach costs five mana, and you need to be able to use the Artisan immediately, I went with some instants that can be cast without mana. Mutagenic Growth and Gut Shot can each be cast for the low cost of 2 life, and since the Artisan's ability will resolve before the spell that triggered it, casting a Gut Shot on it won't be lethal. I'll also include Lava Dart. It can be cast for only one mana, and if you have a Mountain, you can cast it earlier in the game, then flash it back on the critical turn without paying any mana.

To help you reach the five mana necessary for Through the Breach and Sneak Attack, I'll throw in a couple ways to accelerate your mana production. Worn Powerstone guarantees you five mana on turn four, even without another land drop. This allows you to curve out quite nicely, with Artisan of Forms on turn two, Worn Powerstone on turn three, and Through the Breach on turn four. If you don't have Artisan of Forms, Pentad Prism allows you to cast Through the Breach as soon as turn three. Although it's a one-shot deal, the ability to float two mana to your next turn can be quite valuable.

Now it's time for our two shifters of shape (although technically they're Human Wizards) to battle it out in the arena. Only one can be victorious, so let's go see who's in top form and who will be left at the bottom.

Each side started off with a land, and Phyrexian Forms cast Artisan of Forms on turn two. Darksteel Artisan cast Pentad Prism with two counters, and Phyrexian Forms cast the Phyrexian Dreadnought, using Defy Gravity to make the Artisan a copy of it. The Artisan attacked for 12 before ending the turn. Darksteel Artisan cast Sneak Attack and put in Worldspine Wurm, attacking for 15. The Wurm was sacrificed at the end of the turn but left behind three 5/5 Wurm tokens. Unfortunately, a flashed back Defy Gravity allowed the Phyrexian Dreadnought to soar over them for lethal damage.

Darksteel Artisan cast Sneak Attack but didn't have a second red mana to activate it and was forced to pass the turn. The Phyrexians cast a Phyrexian Dreadnought, sacrificed it, and made Dimir Doppelganger a copy of it. The Doppelganger attacked for 12, but Darksteel Artisan responded by putting a Blightsteel Colossus in with Sneak Attack and attacking for a lethal amount of infect damage.

A New Form of Preview Card

I hope you enjoyed this brief peek into Theros. Be sure to come back next week, when I have a truly incredible preview card to share with you all. I am quite excited by this next card, and I have a feeling you might like it as much as I do. Until then, may you find the form that suits you. See ya!