elcome back, laboratorians! It's No Theme Week here on DailyMTG, which means... well, it means I started out the week with no idea what I was going to write about. But I have decks now! Two amazing decks that are very loosely tied together by the theme of types.

Whenever I'm trying to come up with new ideas, I pull up the latest set in Gatherer and look through it for potential opportunities I haven't taken advantage of yet. Sometimes, that leads me down a fairly straightforward path to a deck that uses one or more of the new cards. However, sometimes the path is winding and twisted, and the deck I end up with is nothing like the idea that started it. My first deck today is a result of the latter form of inspiration. 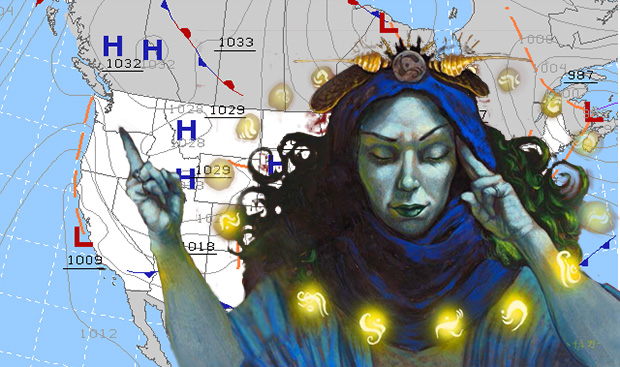 The card that first caught my eye was Riddle of Lightning. I considered pulling the old Draco/Erratic Explosion trick with it, but most people are aware of some variation of that combo, whether it be the original or the more recent version with Worldspine Wurm and Blast of Genius. In addition, I felt fairly certain I'd written about it before at some point.

Next, I looked for ways to punch up the old combo. One idea I had was to make it so Draco is the only card in your library. Then you could cast Erratic Explosion and it would remain on the top of your library, ready for a second Explosion to finish the job. At first, I thought about using Mana Severance and Selective Memory to exile everything, but I wanted to find a way to do it with just one card.

Myr Incubator was the next card I thought of, but there were several problems with it. For one thing, exiling your entire library with it would give you enough Myr tokens to just win the game anyway.

Why don't I just do that?

Although Myr Incubator decks were fairly well known in their day, that was eleven years ago now, and the combo has been largely forgotten. I hadn't even thought about the card in years. It seemed like a prime opportunity to both show off an old combo card and punch up the deck in classic From the Lab style.

Made With 100% Artificial Ingredients

As soon as I settled on Myr Incubator, I knew I would have to make an all-artifact deck. Fortunately, the six artifact lands from Mirrodin block make that a lot easier. With the deck's twenty-four lands in place, I just had to figure out what other artifacts to include.

First, I wanted either another win condition or a way to find Myr Incubator. Kuldotha Forgemaster fits the bill perfectly, letting you sacrifice any three permanents to search your library.

Coalition Relic and Worn Powerstone both accelerate your mana, allowing you to cast Myr Incubator as soon as turn four. Krark-Clan Ironworks is even more powerful. It effectively makes all your lands produce three mana, provided you won't be needing them again, and can sacrifice itself or anything else you don't need for extra mana as well. Provided you've already cast a couple artifacts, you can cast this on turn four and make the twelve mana to combo off before you even untap.

Since I wanted to exile my entire library, I needed a way to win the game on the spot, without having to wait a turn and attack with the tokens. Blasting Station and Grinding Station both work perfectly. When all the tokens enter the battlefield, you'll put some absurd number of untap triggers on the stack. You can then activate the Station in between each one, sacrificing the Myr one at a time until your opponent has either 0 life or no cards in his or her library.

Brittle Effigy serves as both a one-drop artifact that can be sacrificed to Kuldotha Forgemaster or Krark-Clan Ironworks and a way to deal with opposing creatures if you can't combo off right away.

The final piece of the puzzle was perhaps the most brilliant. Since the deck is entirely made up of artifacts, Skill Borrower will always inherit an activated ability from the top card of your library, provided it's not another Skill Borrower. It can produce mana, sacrifice artifacts to search for Myr Incubator, or even replace the Incubator itself, letting you end the game a turn earlier than you would otherwise have been able to.

It's a Conspiracy! No, the Other One

Like Gavin last week, Conspiracy the set brought to mind Conspiracy the card. In fact, I ended up using one of the same combos he did in his article, although that wasn't where I started out.

If you also have Venser, the Sojourner, this can get out of hand very quickly. Say you have just three creatures on the battlefield. Then you cast Day of the Dragons. Those creatures get exiled, and you get a trio of 5/5 not-Dragon tokens. Now flicker the Day with Venser, the Sojourner. You don't sacrifice your not-Dragons, and your original three creatures come back. At the end of your turn, Day of Dragons will come back and exile all your creatures, giving you six tokens this time.

Inquisitor Exarch gives you something good to flicker when you're just putting out creatures, and Healer of the Pride will give you some extra life no matter what you target. In fact, you can even have Flickerwisp and Glimmerpoint Stag take turns exiling each other to gain 2 life at the end of every turn.

Since I've already included a number of cards that take advantage of flicker effects, I added in Restoration Angel as well. Although it can't target Day of the Dragons, it can target a creature that can. As Gavin discussed, it can also flicker itself indefinitely with Conspiracy, making it a non-Angel creature, which in this case allows you to gain an arbitrarily large amount of life through Healer of the Pride.

Although Day of the Dragons is fun, I wanted another option with a more immediate impact. Reaper King was the card that best served that function. If you choose Scarecrow with Conspiracy, you can have your Wisps and Stags flicker each other all day long, destroying permanents each time. In fact, Restoration Angel can be used to destroy all of your opponent's permanents in one turn, leaving him or her utterly defenseless.

I also included a play set of Enlightened Tutor. It can search for any of the main combo pieces. Conspiracy and Day of the Dragons are enchantments, and Reaper King is an artifact. In the mana base, I added in Cavern of Souls. With Conspiracy out, it can be used for any creature, but its main purpose it to make Reaper King cost a bit less. The deck has three colors already, but with a Cavern of Souls to make a fourth, you can cast the King for just six mana, making him uncounterable at the same time.

Day of the Scarecrows

4 Conspiracy 1 Day of the Dragons

1 Day of the Dragons

1 Day of the Dragons

Tell Me a Story

With the Artifactory's blazing fast combo kill, it didn't seem fair to pit these two deck against each other in the arena. Therefore, I've decided to throw you all in instead!

It's time for another contest, and this one will be a bit special. Although I usually focus on combo decks in this column, there's another kind of Johnny deck building that often gets neglected: The Vorthosian Theme Deck. The idea is to take an idea, whether that be a story, a character, or even a movie title. (A friend of mine has a Snakes on a Plane Commander deck)

So, the challenge for you, my fair readers, is to come up with a deck based around one of the storylines in Magic. You can go old school with something like the Weatherlight saga, or build a deck based on the plot of Theros. You could even choose a Planeswalker novel or an Uncharted Realms article if you like.

Once you have your deck worked out, send me the list along with a description using the email link below. Make sure I know which story you're referencing, and explain at least the most important card choices. The contest will remain open for two weeks, so you'd better get started. See ya!