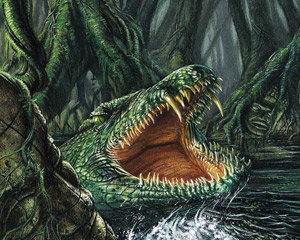 Greetings, incoming Johnnies, and welcome back to the lab! Well, since I'm bringing all of you this column "from the lab" technically we're not in the lab at all. Nope, we're in the deserted smelly alley that opens up into an overpopulated city that would never expect an insane scientist to build a rival city-size laboratory underneath it. Those alligators in the sewers you don't believe in but secretly do? They're my carefully stationed guards, programmed with the IQ of Sun Tzu (apparently the most popular historical genius right now) and under my hypnotic command. If anyone were to somehow break into my lab through the heavily concealed passageway in this alley we're in (go ahead, look around for it), I'd promptly trap that person in my Laboratory Labyrinth (Lab^2 for short) and laugh as you'd bumble around in the dark for the escape.

Whew! This mad scientist charter is a riot!

Besides imaginary alleys, what the Magic community is currently smack dab in the middle of are Shards of Alara previews. Spoiler seasons are right up there with summer and winter holidays in my book. During this time of the Magic year, I would always imagine each column as an inviting store, with something new and impressive being shown off in the window of each. Unfortunately, this week I don't have a preview from Shards of Alara, so my metaphorical window would consequently be empty. Not so fast, say I! To make up for the lack of preview, I'll be discussing four new deck ideas instead of the usual three. And next week, I will have a juicy preview from Alara to share with you all. Savvy?

I Double Scare You

Eventide still has a lot of unexplored cards and potential deck ideas to cover. Wait, didn't I say that last week? Oh right. It's still true, though. For instance, let's take Scarecrone, the very interestingly spelled "other" Scarecrow lord (after Reaper King). Scarecrone is an instant benefit to a Scarecrow deck because it can gain you some extra cards by icing any extra straw man you have lying around, even the recently creature-type-updated Straw Soldiers. It can also bring back not just Scarecrows from the graveyard, but any artifact creature left to rot in the grumper, even the never creature-type-updated Nullstone Gargoyle. It's flashy, fun, and just begging to be built around.

Together they can put the hurt on your opponent's creatures via numerous -1/-1 counters. Of course, you need some way to get initial -1/-1 counters on their creatures. Shadowmoor has older, but still efficient ways of doing this. While little spells like Scar and Cultbrand Cinder can single out creatures, meatier spells like Blowfly Infestation and Everlasting Torment spread the pain further. Perhaps the mightiest and meatiest of them all, Grim Poppet is doubly effective with Scarecrone pulling the strings. (Midnight Banshee can also make a bid for that title, but it's a little too good at its job—you need your Scarecrone to survive!)

Eventide brings even more ways of handling -1/-1 counters. Soul Snuffers is Midnight Banshee in miniature. It's cheaper and absolutely perfect with Lockjaw Snapper. Crumbling Ashes is a slower version of the Snapper-Scarecrone combination, while Pyrrhic Revival messes everything up for the better. If you've got the Snapper is the graveyard, play the Revival to bring everyone out, then send them right back by sacrificing it to the 'Crone. Blowfly Infestation in particular works well with the "kill, then kill again" aspect of the deck.

Eventide's biggest offering to the deck, though, is Necroskitter. Why kill again when you can gain control of nearly everything?

To keep the balance between Scarecrows and -1/-1 counters even, four Fang Skulkins are there, as well as four Scuttlemutt to accelerate. It was tough, but I restrained myself from adding red to the deck, keeping things mono-black. In a weaker moment, I would add some Puncture Bolts and Puncture Blasts here and there.

Random wordplay moment: Scarecrone is a frustrating but fruitful anagram prospect. The deck is named Scareskitter because CRONE and NECRO share the same letters.

While I am not as much of a green mage as Chris Millar, I do enjoy in-game interaction with lands. Besides just tapping them for mana, I mean. The usual: animating a bunch of them at once to alpha strike, destroying them (as long as they're my opponent's; check out the cool Ajani Vengeant to see what I mean) and sacrificing them to helpful effects.

Flashback to Saviors of Kamigawa: No one that I knew seemed to be too happy about the set, and I didn't understand it. I thought sweep was a very cool mechanic when it was previewed. I filed it under "Underused Mechanics to Work With" and stashed it in my mental filing cabinet. (Undercity construction was just beginning.)

Flashback to Morningtide: Two cards that initially shone the brightest to me were Shard Volley and Scapeshift. To a red player, the Volley seemed so cool, while Scapeshift caught my eye because I knew I could effectively use it. I just didn't know how. It was like trying to remember a dream.

Retrace to Eventide. Oh wait, that's now. Well, as you can guess, retrace was another cool mechanic that used lands in an interesting way. Being a sharp sort of chap, I connected the dots in various ways. For example, Scapeshift is dynamite with Worm Harvest. Turn four, Scapeshift all of your lands into the graveyard and fetch four more to put in play. Next turn, drop a fifth land and Harvest some Worms. Shard Volley can work similarly.

Unfortunately, there are no Forest or Island sweepers in Saviors of Kamigawa, so I'll sadly leave it on the bench. Saviors can still provide for the deck, in the form of Oboro Breezecaller and Sasaya, Orochi Ascendant. The Breezecaller, along with all of the Soratami from Kamigawa block, are a great way to get a land in hand for retrace. Of all of the Moonfolk, I chose Oboro Breezecaller because it effectively bounces your own lands for free: tap two lands to activate it, then return one tapped land to your hand and untap the other. If you had some sort of Fertile Ground effect on the untapped land, you could make extra mana. Good thing we've got Sasaya, Orochi Ascendant, then. Her Mana Flare on massive steroids ability can produce tons of mana to work with. While flipping Sasaya, Orochi Ascendant is tricky, Oboro Breezecaller can help out. As long as you've got eight lands in play, use the plucky Moonfolk to eventually get seven of them in your hand.

Storm Cauldron's first ability can help you accelerate. Sakura-Tribe Elder was an automatic include, but I didn't use its buddy Kodama's Reach, instead opting for the land-sacrificing Harrow. With all the mana you can make with this deck, you should be able to funnel all of it through Worm Harvest or Syphon Life for the win.

Random wordplay moment: I was going to name the deck WormStorm, but discovered a quandary. Despite their similarly spelled endings, STORM and WORM don't rhyme.

When Lorwyn's release saw the printing of Goatnapper, many were stunned. "There are barely any Goats in Magic, and none in Lorwyn! (Yeah, yeah, changelings, Mistform Ultimus, etc.) What's the point?" Chris built a nifty Goatnapper deck to challenge these viewpoints. Now that actual Goats are running rampant through Eventide, we can build around Lorwyn's lost tribe.

The best goat maker of the two available is Springjack Shepherd. The chroma ability also allows for some deck-building restrictions, the sort of thing right up my alley. I figured making the Shepherd come into play multiple times would help me make more goats, so I added Flickerwisp, a total Johnny card that happens to have two white mana symbols for chroma. As if 0/1 goats didn't suggest a stalling strategy by themselves, Plumeveil acts as the ultimate wall for three white mana symbols. To add to the chroma craziness, I really wanted to add Light from Within, but sadly, Goat tokens don't have converted mana costs. The triple-white Balefire Liege can give a boost to your guys though.

The other goat maker is Springjack Pasture, and it's a doozy. Run with me for a second: If you had 20 or so Goat tokens in play (not at all impossible with this deck) you could make 20 or so mana and gain 20 or so life in one fell swoop. Imagine, you could make token after token, then out of nowhere bust out a Blaze for 20. Some stalling strategy!

Making all these Goats can really pump up your Altar Golem, who can bash in for the win if needed. What I'd really like to do with him, though, is suit him up with Battle Mastery—er, Elemental Mastery. That way, you've got infinite hasty creatures! Great for busting through a stalemate.

The rest of the deck is dedicated to making Balefire Liege ridiculous. Battlegate Mimic is a bit too aggressive for this deck, but Fire at Will and Brion Stoutarm fits right in. With the latter, you can chuck an infinitely large Altar Golem at something's head.

4 Rise of the Hobgoblins 3 Elemental Mastery

4 Rise of the Hobgoblins

Random wordplay moment: I really wish I had a third one.

Time Is Running Out

As Shards of Alara moves into Standard, Time Spiral block is directed to the out door, its time in the sun over. To bid farewell to the suspend-y block, I'll revisit one of my kookier ideas that was born with Riftmarked Knight. With the manaless creation of a hasty Knight token, the card tickled my Johnny senses.

I cobbled together a combo that allowed me to create infinite Knight tokens. Three Jhoira's Timebugs, 2 Silver Myrs, Doubling Season, and an Isochron Scepter with Delay on it, plus a Clock of Omens and an Intruder Alarm. The process was too complicated for words, and usually couldn't be pulled off in play. So in memory of Riftmarked Knight, the following deck just wants to make lots of Knight tokens in a fun, non-infinite way.

There's a lot of ideas swirling in there. The deck wants to bounce the Riftmarked Knights, then resuspend them as much as possible. A good play is to use the Sunken Hope to do just that, then next turn sink the hopes of Shivan Sand-Mage, who can be directly replayed to pop the Riftmarked one in play. The deck has lots of fun "comes into play" creatures for Sunken Hope, which messes with your opponent also. I figured Jhoira would be fine here as anywhere, and there are some spicy Mirrorweave targets, such as Kinsbaile Cavalier.

Well, that's it from the lab. Until next time, revisit old ideas!