ello and welcome back to the Lab. The preview cards from Return to Ravnica have been floating into focus lately, after dwelling just beyond our knowledge for months. There's a lot to like from what I've seen so far—particularly from the Izzet League, the guild that I most identify with out of the five in the set. Hypersonic Dragon is all sorts of wowsers, and Niv-Mizzet, Dracogenius presents a slightly different take on the Firemind.

The blue and the red. Cold, careful planning steeped in seething emotion. The coexistence of action and inaction. That moment when you're all but committed to an action, the idea teetering on the brink of time. It's a precarious window, that decision zone, otherwise known in Magical terms as the stack. It's a cylindrical void that all spells pass through, hovering over the board like a clear shadow, a place made up of intersecting mind channels, which can respond to each other instantaneously. It's a subsonic field of the just-before-now.

I bring up the stack because its where my preview card, a gobsmacker from the Izzet guild, goes to gorge. True to blue-red form,

Ever snacked on your own instants and sorceries? Nivmagus Elemental is like a super Atog for your own spells, using the stack as a dinner plate. It bounces out on the first turn and can creep to lethal levels in a blink of a spell. The downside lies in the card's glittering weirdness. The Elemental's hunger engulfs the targeted spell entirely, preventing it from resolving. The concept of disabling your own spells is loaded with wriggly tension. This effect might yet be the closest we have come to "Sacrifice an instant or sorcery." Nivmagus Elemental basically tacks on an optional nullification clause to every instant and sorcery that you cast. It feasts on all your half-baked ideas.

As a stylized Izzet invention, it sends up all sorts of flavor sparks. The card's name falls in line with the guild leader's penchant for dramatic self-promotion. The flavor text is full of fourth-wall winks. I suppose the question is: What sorts of untold havoc can Nivmagus Elemental cause? Well, I don't know about untold havoc, as I can't tell you about untold stuff. That just doesn't work. I'll have a shot at told havoc. 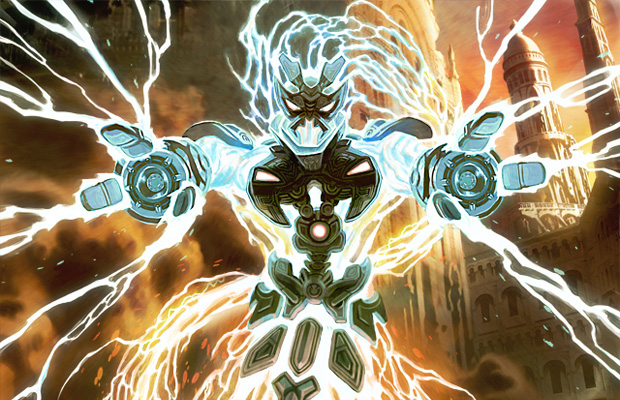 When thinking about Nivmagus Elemental from a deck-building perspective, you shiver for a while, and eventually undergo a painful mind squeezing process. Exiling my own instants and sorceries was difficult to regard as a trick up my sleeve at first. And in terms of choosing my instants and sorceries, footholds were sparse, as since I'm feeding them to my Elemental, their individual functions are negligible. The fact that the munched spells are exiled instead of being placed into the graveyard snuffs out a lot of skullduggery.

My first lead came when I decided to search through the various instant and sorcery mechanics for potential fits. I was looking for any trace of a way to cast my spells and eat them too. Flashback was the first to spring to mind, as flashback spells can be cast twice. With the right flashback effect, it could be worthwhile to have the Elemental eat the spell on its graveyard casting.

Artful Dodge is a perfect candidate, as it's cheap and can bestow evasion on the Elemental. Cast the Dodge, then flash it back and serve it to the Elemental, then swing for a hefty odd number. Seize the Day could be fun on the heels of a Dodge. Think Twice qualifies as well.

From this grain, I journeyed to other mechanics. Replicate had some intriguing options, the most delicious being Gigadrowse. A mono-blue deck could unleash a monster Gigadrowse targeting your opponent's entire side, then tap the opposing creatures and feed the rest of the copies to Nivmagus Elemental. Vacuumelt can similarly clear an attacking window.

Rebound has a little niche of coolness as well. Like flashback, it provides two spells in one. Distortion Strike and Staggershock are bound to help you out no matter what, and the mystical Cast Through Time remains an intriguing deck centerpiece.

With all these instants and sorceries flying around, I looked for other creatures that enjoy spell flurries to fight alongside Nivmagus Elemental. Kiln Fiend and fellow guild member Wee Dragonauts will grow every time you cast a spell (even if it doesn't resolve). Talrand, Sky Summoner will produce a 2/2 Drake token for each cast spell. Surrakar Spellblade will accrue many charge counters, and with all the evasion-granting cards in the mix, it'll send waves of cards from your deck to your hand. The last addition to this deck was Dizzy Spell, which can search for and feed an Elemental. With other important one-drops like Gigadrowse and Flame Slash to find, the spell was bumped to four copies.

That's a fairly adequate take on a blue-red-based Nivmagus Elemental, and there are a ton of spells out there that could fit into this skeleton. Expanding further, a whiter take on this idea might include Emerge Unscathed to protect the Elemental from harm and Pull from Eternity to return exiled spells to your graveyard, where Snapcaster Mage can dangle his flashback strings. An earlier version of this list made use of the Runic Repetition and Mystic Retrieval loop o' fun.

The last strip of strategy that Nivmagus Elemental might mesh with involves copying spells. Copies of spells are still spells, so any repeatable effect like Dual Casting or Isochron Scepter could lead to a massive Elemental.

This led me to a challenge. Could I set up an infinite stream of spell copies to severely bulk up Nivmagus Elemental? A fully leveled Echo Mage says yes. Copying spells twice in one wrist flick is ripe for wackiness, especially when the spell in question is Reality Spasm. With X equaling 3, double copy the Spasm. Let Copy 1 resolve, untapping two Islands and the Mage. Now have the Mage double-copy Copy 2. In this way, an infinite amount of Spasm copies will flood the stack. Have the Elemental swell to killing size and swing. Even if the Elemental isn't around, infinite mana can easily be generated with this combo if the value of X is properly adjusted. From there, a Blue Sun's Zenith can sear your opponent's mind.

I shored up the level-up theme by adding Enclave Cryptologist, a fine looter, and Lighthouse Chronologist, a nifty extra-turn enabler. Venerated Teacher can provide some education as well. And to really give the deck a mana boost, I added Gauntlet of Power. With double blue mana, you can level up your creatures in no time or lay down crippling Gigadrowses.

What havoc can you bring about with Nivmagus Elemental? I await your emails concerning it and other cool Return to Ravnica cards! Join me next week when I show up another one. Until next time.