h, the non-theme week. How I slightly loathe you. If you all remember last week when I heartily greeted you all with a rousing discussion of the Allies of Zendikar, you will recall that it was a theme week. I personally love theme weeks, and try to hit the theme perfectly spot on (or quirkily scattered, depending on my mood) every time. 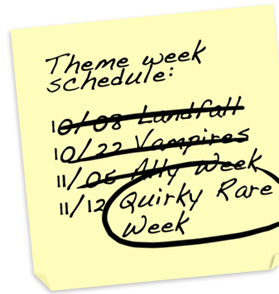 Non-theme weeks, though, are a pain. What to write about? Well, it's mid-November of 2009, and nothing is looming too large on the Magic calendar. Sure, Worldwake (the second part of the block that Zendikar kicked (ha!) off) will see its release in early 2010, and the Magic World Championships are coming up next week, but for right now, things are relatively stagnant. If the "dog days" are in the summer, then what do you call these boring days of the fall? "Cat days?" "Turkey days?" Some questions just don't have simple answers, especially when you consider that the word "dog" really has nothing to do with the word "summer." Freaky.

But this talk of wordplay and similar shenanigans must cease now, as I'm moving onto Magic. What cards to talk about in the here and now? There are a couple quirky rares to talk about today, as well as an interesting cycle and fun things to do with each of them. In fact, let's tackle the latter bit first, and get to the decklists in a little while. Sound like a plan?

Questing for the Rest

Yup, I'm landing on the nifty Quest cards again. I have covered some of the Ascension enchantments already (specifically, the blue and black ones) but for the purposes of this article, I'm talking about the five silver-symboled uncommon ones. You know, the ones that actually say "Quest" in their respective names. Each of them seems like a great niche card, if not a slight "build around me" card. Because I'm so interested in this cycle (as I mentioned a couple of weeks ago, I simply love the flavor here), I'm going to go through each of the five here, starting the races with the niche ones and ending with what I think is the most interesting one.

Quest for Ancient Secrets: Many deck archetypes have a need for a Reminisce or a Mnemonic Nexus or two. Quest for Ancient Secrets might just be better either of those cards from a casual perspective. First of all, it gets powered up by cards entering your graveyard from anywhere. I'm pretty sure than in an everyday game of Magic, this sort of thing occurs often. Simply cast any instant or sorcery, for starters, or mercilessly insult your opponent's hairstyle until he or she loses it and destroys one of your creatures or lands. (Note: Merciless hairstyle insults probably not necessary.) Discard would do this as well, and eventually you will have enough cards in the graveyard to both enable and warrant a quest for ancient secrets. Overall, a nice niche card.

Quest for Pure Flame: Just as the blue one is a cheap and sacrificable version of Reminisce, this likable red card is just that for Overblaze. The actual first method that popped into my mind was as a cheap (as in budget) alternative to Furnace of Rath. Oftentimes, you don't need the Furnace on the board for that long to do a boatload of damage, and the Quest allows you to control just when and where the double damage will begin (and end).

However, there is the matter of amping up the card with quest counters. One of the best methods to do this, I think, is to use Manabarbs. Tapping lands is an important part of the game, and a first turn Quest for Pure Flame will gain a ton of counters once you drop the Tenth Edition enchantment.

From there, any crazy burn spell can combine with the fully charged Quest to roast your opponent for a lot. Keeping with the theme of damaging your opponent, a large Talon of Pain activation could be game-winning. (In fact, I have a fun War Elemental deck that this card could fit right into.) Creature-wise, any double striker becomes kind of a quadruple striker, so feel free to send that Boros Swiftblade on this quest. Another new Zendikar treat, Hellkite Charger, could be great alongside a small army, as the Quest will double all damage during the turn, even when it is dealt during extra combat phases. And, while we're talking about Hellkite Charger, here's an instant win combo with the giant Dragon: Hellkite Charger + Nature's Will. Attack, pay the

, hit for an initial five, untap your seven lands, and repeat on your new combat phase. I have been waiting a while for the "Aggravated Assault" creature (though Godo, Bandit Warlord was a neat guy). Wait, why am I still talking about this? Back to Quests.

Quest for the Gemblades: Before you fellow Johnnies get crazy ideas about dealing damage, note that this card requires it to be combat damage, that classic stickler of a clause. While we're dissecting the card, also note that the damage must go to a creature, not a player. Okay. So the best creatures to send on this Quest must be those who like to tangle with opposing creatures.

Vigilance and regeneration seem like great abilities to explore here. Creatures with vigilance, such as Mirri, Cat Warrior, can both attack and block, dealing damage both ways. Meanwhile, regenerators can play a bit more defensively, repeatedly holding back large attackers, dealing damage all the while. Of the many regenerators available, we could either keep it 2009/1995 and use River Boa, or kick it old-school with Troll Ascetic. Both would be tremendous with an extra +1/+1 counter or four.

Quest for the Gravelord: This one, like the blue Quest, seems to fall into that "niche" role. Creatures hit the graveyard from the battlefield all the time, so it shouldn't be much trouble amping this one. Since the cost isn't so great this time, let's brainstorm about the quickest way to slap a meaty 5/5 Zombie Giant creature token onto the battlefield.

It's off color, but Goblins sure like to kill themselves and their fellow tribe. Mogg War Marshal and Skirk Prospector have long been a weird one-shot red mana sparkplug, so adding a Quest for the Gravelord would fit in ... kind of. Perhaps a more mana-trouble-free way involving Goblins would be with Weirding Shaman and Marsh Flitter.

Plagued Rusalka was an all star of casual Ravnica block, and while sacrificing Goblin tokens, it also gives a use for your 5/5 besides beating face, albeit only once.

I can't help but notice the Giant in the Zombie Giant typeline on this token. It could help Thundercloud Shaman clear the rest of the board, which might just power up another Quest for the Gravelord.

Quest for the Holy Relic: This one seems to me one of the harder Quests to get online, but once you do, the effort could (and probably would) definitely pay off in a positive way. Some more tricky phrasing here: You have to actually cast the creature, so putting tokens onto the battlefield a la Martial Coup won't work, and casting a Captain of the Watch will result in one quest counter gained, not four.

So this enchantment plays well in a creature-heavy deck, either one with a low mana curve or with specific creatures that like to be played over and over. Either way, this Quest is probably the least Johnny of them. However, that certainly doesn't dampen the fun of casting this on turn one, two white one-drops on turn two (Steppe Lynx? Figure of Destiny? Eager Cadet?), a three-drop (perhaps Skyknight Legionnaire—wait, why the red? You'll see) on turn three, and a pair of two-drops on turn four, one of which is a kicked Goblin Bushwhacker. That's five creatures, so go and fetch a Sword of Kaldra and give it to the Legionnaire. All your guys have haste thanks to the kicking Goblin, so swing! That sounds fun, even if it is a "God Draw." 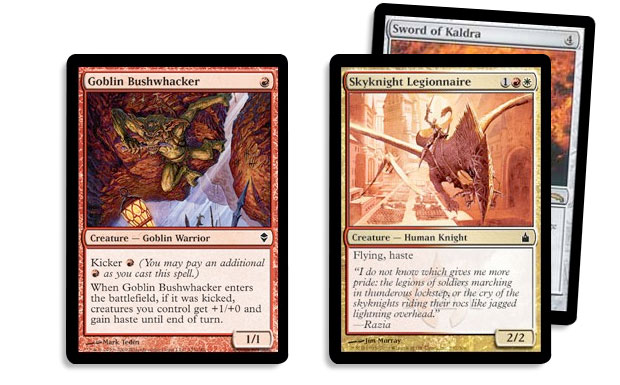 I haven't even mentioned my goober tendencies going mad at the idea behind these cards. Looking at Quest for the Holy Relic, I love the idea of a slowly increasing fellowship searching for a lost weapon to bring them to victory. See if you can interpret the others! 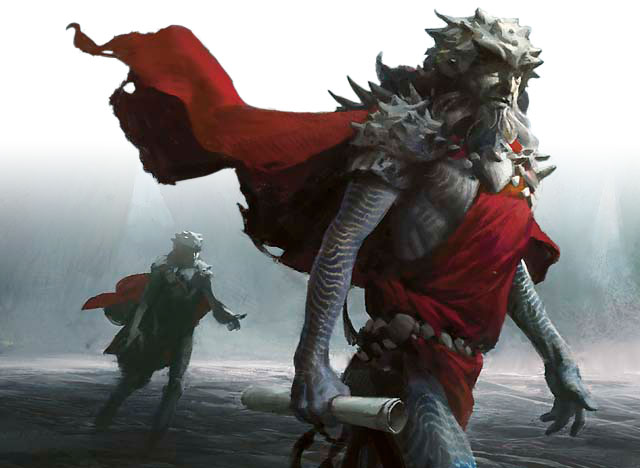 Get it? Lullmage Mentor is, to his fellow Merfolk, a mentor, or perhaps a father figure, or even perhaps a "Pop." Behind his rigid gaze, he is really a kindhearted fellow who takes pleasure in snuffing out the spells of his opponents. That's the guy I want mentoring my young fish people! He's so good at his job, he actually becomes a "Pop" of sorts when he fathers a 1/1 Merfolk creature token every time you counter a spell.

When I saw this card for the first time, my heart leapt, even though I'm far from the typical draw-go player (one who does nothing but draws on one's own turn, and messes with the opponents' stuff on their turns). You see, Lullmage Mentor is kind of the perfect win condition for these slow-moving decks. (And by perfect, I mean for the casual mono-blue decks. I am by no means saying Lullmage Mentor should be a tournament powerhouse.) These decks just seek to counter things all day long, and what better thematic win condition than a mass of tokens assembled through your various Remands and Cancels?

However, this is From the Lab, and I've got to inject a bit more wacky here somehow. That wacky is coming in the form of Dovescape, already a really trippy card. Since Dovescape is a source you control, when it counters a noncreature spell, you'll get a Merfolk token along with the masses of Bird tokens!

Man, if only those Bird tokens were Merfolk as well! Then I could achieve a soft lock: By tapping seven of those Merfolk / Birds, I could counter any creature spell with the Mentor. As for noncreature spells, Dovescape does that already! All I need to do is make sure I have at least six Merfolk tokens in play at all times (so those and the Mentor itself can be ready to counter).

Well, Conspiracy turns everything into a Merfolk, and post Dovescape it's an easy five Bird tokens—or Merfolk tokens, if you already have a Conspiracy out! As for having a ton of Merfolk tokens, the usual suspects like Summon the School and Stonybrook Schoolmaster are happy to oblige.

The Dovescape thing is definitely cool, but I only included two copies because I wanted the deck to be full of options. Merrow Commerce is slightly evil alongside Lullmage Mentor, letting you counter a spell on each turn. Judge of Currents + Lullmage Mentor = repeatable super Absorb. Can anything else be said?