ello and welcome back to the Lab. After weeks of stewing in the creative faculties of Wizards, Magic 2013 is finally available. As a core set, it delivers on a previously established path: providing exciting new cards and returning old favorites as well. Overall, it's a sturdy set for newcomers to this great game. 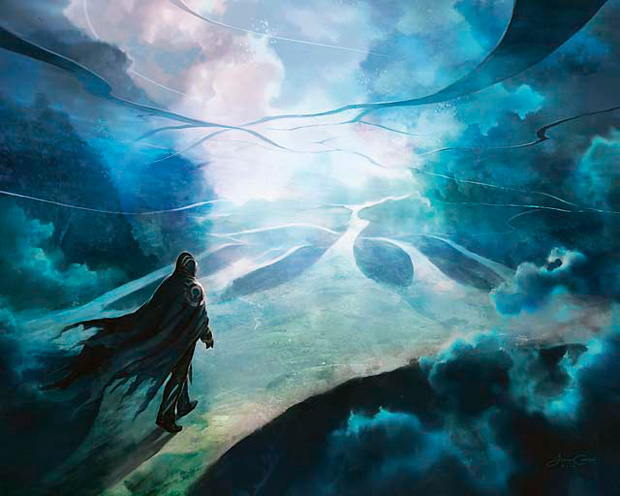 I've got a lot to splurge on in this intro. For instance, the latest cuts in the new Core Set Survivor. Giant Spider won the first series, and it celebrated so violently that it didn't make it back to the M13 audition table. Last year at roughly this time, I proposed a new Core Set Survivor, hinging around the revolutionary Magic 2010. I wrote then: "M10 was the first newfangled core set, and thus the first one to feature new designs. It would seem that the truly perfect of these would exist in every following core set." Three years later, there are three contestants left (okay, eight if you count the rare nonbasic lands): Disentomb, Acidic Slime, and Elvish Archdruid! Down to the wire! I'm rooting for the Slime, personally.

Secondly, in the style of my request for interesting Deadeye Navigator decks a couple months back, I've been agog at Omniscience, and would love to dedicate a column to this ridiculous card. So if you've got any deck ideas concerning Omniscience, send 'em in! That goes for any fascinating Magic 2013 card as well.

Alright, on to some decks. My experiments today involve both cards new to the core set and cards new to Magic itself.

I'll start today with Gilded Lotus, an auspicious reprint and excellent mana-ramping device. Tapping for three mana is quite the powerful effect. I wonder what strategies the Lotus will facilitate in Standard. Luckily enough, a recent email from reader Devon Murphy outlined a bunch of combos in Standard that are enabled by Magic 2013 cards. One of his ideas involved the previously mentioned Deadeye Navigator. In his words: "Soulbonded Deadeye Navigator and Zealous Conscripts + Gilded Lotus. Infinite mana, untaps, enters the battlefield effects, and steal all of your opponents permanents for a turn!" 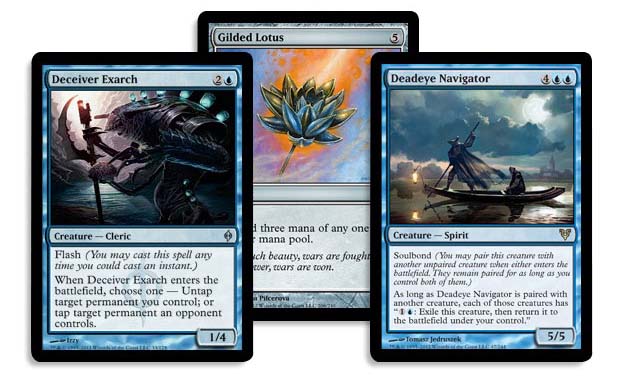 That's pretty wacky. Minus the permanent thievery, Deceiver Exarch acts as a capable substitute for the Conscripts. A turn-five Lotus can lead to flashing out the Exarch at the end of your opponent's turn, proceeding to a turn-six Navigator and going off. Once you have infinite mana, have the Navigator start flickering Pierce Strider to chomp away at your opponent's life total. Other synergistic creatures made the list, like Æther Adept and Gryff Vanguard. To round out the deck's defenses, I added some helpful instants. Think Twice can speed up your draws, and Mana Leak and Brimstone Volley can solve some problems.


Gilded Lotus isn't the only combo card to come back from the original Mirrodin block. It's joined by the tinkling Clock of Omens, a card I have used many times in the past. Its seemingly innocent text box is actually a gateway to many infinite combos, and its inclusion in the core set is an injection of insanity for aspiring Johnnies. 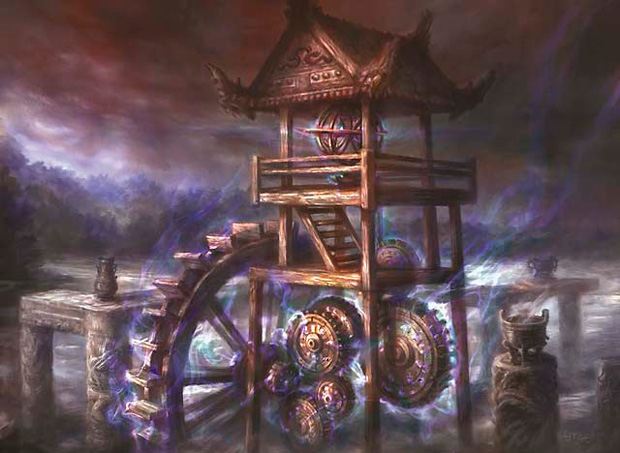 In the same email, Devon shared an idea for breaking the Clock in Standard. His idea was this: "Myr Turbine + 2 Galvanic Juggernaut + Clock of Omens + Bloodflow Connoisseur. Infinite death triggers and an infinite/infinite!" I love the use of double Juggernauts here. As much as I love convoluted combos, though, I felt this one was in need of streamlining.

I started over with the Clock and the Turbine, which spits out artifact creature tokens. If only it made two instead! Then the Clock could promptly tap them to untap the Turbine, and spark an infinite amount of tapped Myr tokens.

Well, Parallel Lives is a thing. The enchantment will double your token production, and actualize the above speculation. Cycle that combo at the end of your opponent's turn, then swing for the win with your many tokens.

To accommodate Myr Turbine, I utilized a Myr-based strategy. The various mana Myr speed up the deck's performance. Myr Propagator is a fun card that, with Parallel Lives out, will spout copies of itself. Myr Galvanizer gives the deck another avenue of infinity. With two Galvanizers alongside Palladium Myr and Myr Propagator, you can assemble infinite Propagator tokens.

Shimmer Myr makes all your artifact spells instantaneous, which is a great asset to have. A couple Myr Battlespheres made the deck as late-game Turbine targets. I also wanted to add some other dynamic artifacts for Clock of Omens to untap. Lux Cannon is bombastic enough, while the whimsical Trading Post is full of gizmos and gadgets.

Today I'll end with Faith's Reward, a card that caught my eye as a potential harbinger of craziness. It reminds me a lot of Second Sunrise, a card I've had a lot of fun with in the past. I used to mess around with a deck that sacrificed a lot of Zuberas to Phyrexian Altar and cast Second Sunrise to get them all back. Eternal Witness was the key piece that returned the Sunrise to my hand.

As fun as Zuberas are, I'm splicing only the Witness from that idea to my following one. Instead of using the Altar to create mana, I'll stick with good old lands. Of course, they need to get into the graveyard so Faith's Reward can bring them back. Thaumatog will happily eat all your lands and grow huge in the process.

I also need a new way to kill my own Witness. Moonglove Extract is a solid choice, as it can be returned with the Reward and can oust opposing 2-toughness creatures.

If you're lost at all, here's the combo in clearer terms: Have at least four lands, a Witness, an Extract, and a Thaumatog out. Tap all your lands for mana and then have Thaumatog eat them. Blow up your Witness with the Extract. Now cast Faith's Reward to bring all your stuff back. The Witness will return the Faith's Reward to your hand. Everything's the same, except your Thaumatog is a bit bigger. A few cycles of this and it'll be gigantic. Suit it up with some evasion and swing for the win! Vow of Wildness can give it the proper oomph, and it can also lock down an opposing threat.

Another path to victory is merely a second Moonglove Extract, which you can aim at your opponent each time. Infinite mana is also possible, if you have more than four lands (which is probable). Pour it into a Helix Pinnacle for a stylish win. The deck is on the controlling side of things anyway, with Wrath of Gods in there to stop creature swarms and Harmonizes to find your combo cards.


Hope you all enjoyed. I'll quickly reiterate here: send me your Omniscience decks! And any other ideas you feel like sharing with me! Until next time!