Starting next week, From the Lab will now appear on Mondays alongside Making Magic. Be sure to check his next column out July 2! To learn more about this change read my article from Monday.

ello and welcome back to the Lab. The site has shifted back to Magic 2013 and its array of new cards. I find many of them incredibly exciting so far, like the bombastic Worldfire (which is basically a sudden-death button) and the pastoral Boundless Realms (I smell a 35+ land deck in the near future). Diabolic Revelation, meanwhile, is screaming to assemble an entire multiple-card combo.

I've previewed a lot of psychotic blue spells (Infinite Reflection, Hive Mind, Laboratory Maniac) in this laboratory, a place where I essentially practice combining. The joining together of two or more forces into a thorough mix of both parts. My preview card today exists in similar company, and has stricken me so wistfully, it seems to my currently (and happily) addled brain that it encapsulates the art of combining things.

Let that thing soak in your mind fluid for a bit.

This card is... wow. There are so many angles to ramble on about. It's a totally epic spell, and as a design, a sheer feat of variance. Billed as a mash-up, it'd be The Mimeoplasm + Sins of the Past. Yep.

Spelltwine is no lightweight. Join me as I dizzy-spin my way through this card's potential.

Okay, so where to begin? Let's see what this card's most broad brushstroke is, and progress to the nimbler nuances. At its base use, it functions as a sort-of Rise from the Grave for instants and sorcery cards. That effect alone is pretty darn cool. Then factor in the potential of any other instant or sorcery card in your opponent's graveyard. Spelltwine thus will have a ton of different iterations on battlefields everywhere! 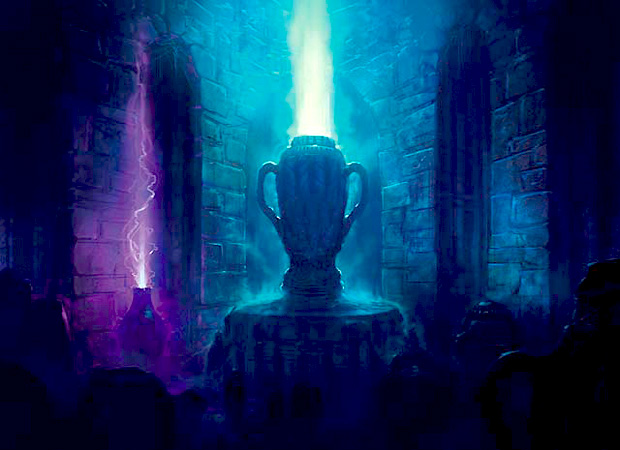 There's one snag to the card, though. Your opponent needs to have an instant or sorcery in his or her graveyard for Spelltwine to even occur (it needs both targets). Since they are commonly cast cards this can be an easy hurdle, but perhaps just as often, your opponent's spell-free or otherwise bare graveyard will be a setback. And if there isn't a Spelltwine target in your opponent's entire deck you'll be sadly out of luck.

So it seems like a good idea to forcibly fill my opponent's graveyard with potential Spelltwine targets. I also want to make sure my own deck has awesome instants and sorceries to copy. Adding those goals together gave the deck a clear focus: instant- and sorcery-based milling. I'm delighted to find a home for Chill of Foreboding, an overlooked uncommon that can dampen both graveyards. Glimpse the Unthinkable and Mind Funeral can rip chunks from your opponent's library, as can the sometimes-free Archive Trap. Noble Benefactor can set up an opponent's library search, after which you can spring a Trap (and the Benefactor can promptly find a Spelltwine!).

I foresaw having hands clogged with expensive instants and sorceries, so I added Compulsion as a method of occasionally flushing my hand. Damnation works to control the board, and in a dire moment it can be Spelltwined to slow your opponent's onslaught.

The last members were Dimir Signet as a mana artifact and two Mnemonic Walls to possibly recur instants and sorceries. (I'm not dissing the new Archaeomancer or anything, as I like that card. I just thought the Wall's 0/4 physique and "you may" option was better for this deck.) Some funky lands round out the deck's mana base. Nephalia Drownyard is a nice milling land. Dakmor Salvage randomly can dredge, just in case you need a Spelltwine target. Ghost Quarter can destroy problematic lands and set up a free Archive Trap. And Tolaria West finds all those weirdos.

Spelltwine seems like one of those cards that spirals with possibilities, especially when the various methods of playing Magic are considered. I wonder what hijinks it could spill within Magic 2013 Limited, for example. In Standard play, it sure seems fun in an Arcane Melee deck. The enchantment would reduce Spelltwine's cost to

, and as a deck centerpiece it necessitates a ton of revolving instants and sorceries. With the somehow unexpected popularity of Delver of Secrets (yea, a 3/2 flyer on turn one wound up being pretty good) there should be a plethora of Spelltwine targets. 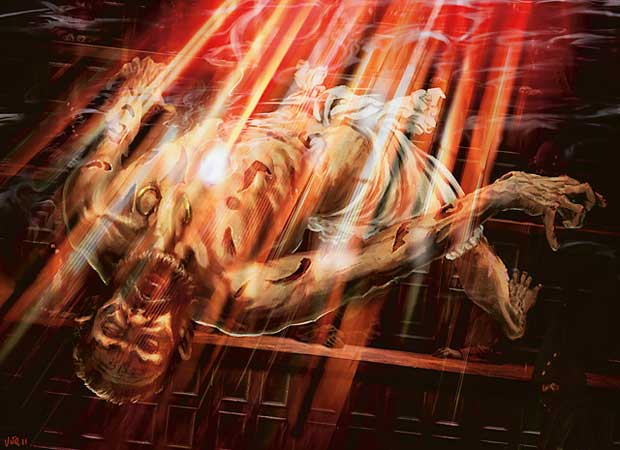 This final deck started off as my take on a Standard Arcane Melee deck, and warped into something far stranger. I started off with a general mission: dome my opponent with burn spells, then use Spelltwine to get some retail value on them. After consulting Gatherer, I knew I wanted to play with Thunderous Wrath (5 damage for

... okay!!!) and the board-sweeping Blasphemous Act (not much will survive that). I'd be very happy to Spelltwine either of those spells.

Then I realized that all those spells were quite expensive in terms of converted mana cost. Minutes of sifting later, and I stumbled upon my deck's new centerpiece: Heretic's Punishment! It even gets cards into my graveyard, which can help my preview card.

Faithless Looting and Desperate Ravings speed up my draws and can dump expensive stuff into my graveyard. Into the Void is a recent tempo card that I like. Mystic Retrieval (Woot! Finally used this awesome card in a Lab deck!) is there as a safety net of sorts, in case I have to discard my Spelltwines (or other good stuff). And to really spice up the deck, I included my personal favorite miracle card, Reforge the Soul. I feel like a new hand of seven is nearly always a good thing, and in this deck it can start a chain reaction of plays.

The aforementioned Delver might as well go in here. Whatever. I'm determined to give way more attention to the deck's wonky singleton, Galvanoth. In a deck with a ton of instants and sorceries, I'd say there's a good chance it hits something cool.

2 Into the Void 2 Mystic Retrieval

Spelltwine's versatility increases exponentially when you consider multiplayer, and through that gateway, multiplayer's current massive avatar, the freewheeling Commander format. So many giant instants and sorceries are cast in those games, with effects that ripple through the battlefield like a tidal wave. Just imagine what Spelltwine will get up to in Commander.

I hope I've offered an exemplary synopsis of this stylish card, which seems coated in fun. If this card ever finds its way into my hand under any Magical circumstances, it'll be hard to resist flitting a sly grin to my fellow players. Spelltwine is destined to be a "story" within a card; a blank slate for players to anoint with great moments that arise because of it.

In the next couple of weeks, I'll get to sink my teeth into some other cards from Magic 2013. Until next time!