Out of the Inbox

This might seem an odd choice for my second rerun, but after my first I knew I needed an actual deck-building column. The first deck in this column was one of my favorites of the year, and the latter two are interesting and focused on Rise of the Eldrazi, one of the more unique sets of all time, in my opinion. It ends with a typically wild idea, that if it were ever pulled off, the universe might collapse. Just another day in the Lab!

elcome back, everybody! Today I've got a smattering of brilliant ideas from readers just like you. A recent wave of creativity has washed a bunch of crazy combos ashore, onto my metaphorical beach. Not a Plastic Beach, sadly, but some ideas did involve some "Superfast Jellyfish" (Dormant Gomazoa), and one reader was taken "To Binge" on Eldrazi (Spawnsire of Ulamog). Kiln Fiend and Splinter Twin, meanwhile, are just "Broken". 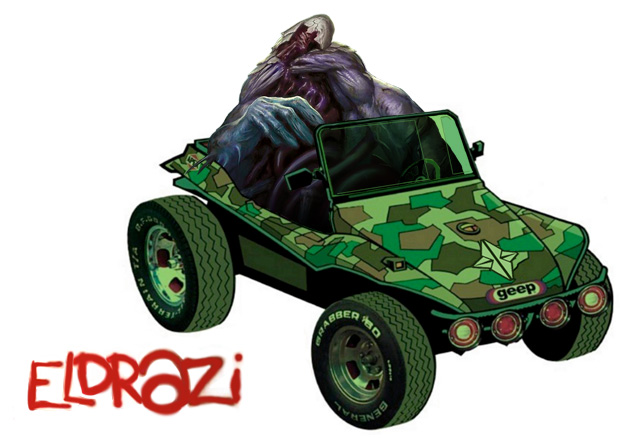 I guess it's obvious what band I'm listening to lately, but I want to thank all of my readers for listening to me and sending in ideas! Mailbag columns like this one wouldn't be possible otherwise!

I think I'll begin with the one deck I didn't allude to above, and continue from there. Let's rock this house!

Recently, a reader by the name of Reinaldo decided to take on the task of cracking one of the more durable nuts from Rise of the Eldrazi, Hellcarver Demon (which, when used properly, really is nuts.) The Demon is statistically a flying 6/6 for six mana, which certainly means it can beat down like a champ. However, once (or whenever) you strike with the Demon, you can kiss your hand and the remainder of your permanents good-bye. Although you get the sweet power to cast any card from amongst the top six of your library for free! 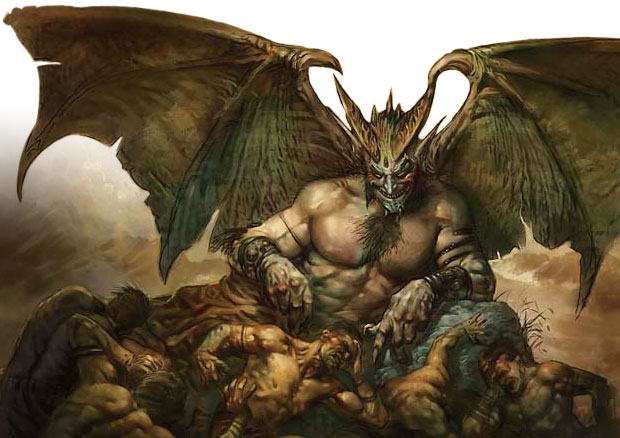 Now, that upside may not sound like it outweighs the downsides, but Reinaldo found the perfect card to tip the scales with: Barren Glory. If the Glory is within the top six cards when you hit with the Hellcarver Demon, you will be able to cast it. The Demon has carved up your entire hand and board (except itself, but we'll address that soon.) Once you axe the Demon, Barren Glory can activate for the win!

Reinaldo suggested popping the Demon into play with the little used Aethermage's Touch. This plan excited me, but I had a tough time getting a chance to swing with the Demon before it was returned to my hand. I liked the idea of getting the Demon onto the battlefield through other means, though, so I switched to Through the Breach, which solved all my problems. The Champions of Kamigawa spell gives the Demon both haste and an automatic sacrifice trigger at the end of turn, eliminating the need for Claws of Gix (Reinaldo's solution.)

What I like about this deck list is that, despite primarily winning with a white card and a black card, the base of the deck is blue and red. In fact, only Urborg, Tomb of Yawgmoth allows me to cast Hellcarver Demon, and Barren Glory cannot be properly cast at all. A weakness, maybe, but I prefer the fun sudden shock of the Demon carving through to find the Glory. Meanwhile, the red and blue provide Arcane spells to splice Through the Breach onto, as well as general stability and library manipulation. Reinaldo included See Beyond in his list to ditch Demon or Glory from his hand, which sounds brilliant to me. I've been waiting for a card like See Beyond for a while, incidentally. (Brainstorm causes too many groans around the casual table.)

4 Through the Breach 4 Glacial Ray

Dormant Gomazoa is the latest cheap fatty that is too often tapped for its own benefit. It's unfair drawback is due to the fact that it's a 5/5 flyer for three mana (which, even in the age of Leatherback Baloth, is too crazy to print drawback-less. Probably.) This poor Jellyfish is the opposite of super-fast! Who can help? 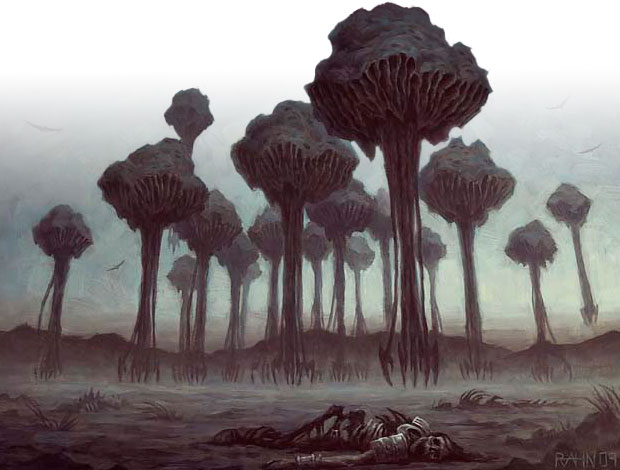 Renegade Doppelganger, that's who! Another great product of the Doppelganger emails that took place a couple of weeks ago came from Tim Goldy, who suggested this straightforward but fun combo. Curve out with these two blue creatures to make the doppelganged Gomazoa super fast, hitting for 5 on turn three!

Another Jellyfish that loves Renegade Doppelganger is Esperzoa! A flying attacking 4/3 on turn three isn't too bad either (ha ha) and returning Esperzoa to your hand isn't a problem, since you can repeat this over and over if you wish. Your opponent better have an answer for both the Doppelganger and your team of Jellyfish.

Tim suggests Forked Bolt as the perfect spell to untap Dormant Gomazoa. Forked Bolt is a great and diverse burn spell, as seen in Exhibit A, where I can deal 1 damage each to myself and my opponent and untap the finicky Jellyfish. You know another great spell to target yourself with? Time Warp.

Guard Gomazoa joins the Jellyfish team as a throwback to the great Fog Bank. Various artifacts are there to help out Esperzoa, including Sharding Sphinx. The metallic Sphinx is great with the Doppelganger, doubling its token producing!

Splinter Twin, like any eye-pleasing rare, was a joy to first read. While not quite as universally diverse as Rite of Replication (which in my opinion gets the Doubling Season award for being timelessly busted), this Aura can get out of hand quickly.

Reader Kelvin had the fun idea to put the Splinter Twin on a recent defender, Mnemonic Wall. At first, this seems less then ridiculous. Couldn't I enchant something cool, like Gemini Engine or Stangg? Heck, I'll even take Brothers Yamazaki. However, Mnemonic Wall is not to be underestimated. Let's throw in an experimental instant, just to sweeten the pot. 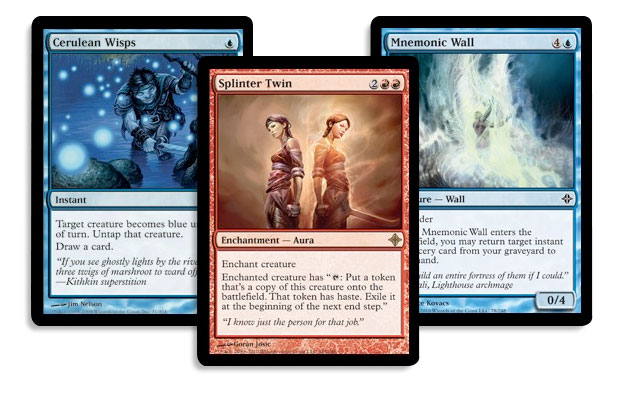 Cerulean Wisps. The blue member of the forgotten cycle of Shadowmoor color-changing instants comes up here to create the following engine.

: Draw a card and put a 0/4 Wall token into play. Holy cricket. Target the Splintered Wall each time to untap it and draw a card (and turn it blue). Promptly tap the Wall to create another Mnemonic Wall, which will bring the Wisps back to your hand.

Now, having a ton of cards in your hand is always nice, but Kelvin also found a way to benefit from having a ton of 0/4 Wall tokens. The card? None other than the somehow-hilarious Vent Sentinel. The 'Ventinel', as I call it, loves seeing a bunch of fellow defenders on the battlefield with him. Use his ability to hit your opponent for a lot.

Here's a decklist, slightly modified from Kelvin's. It takes absurd advantage of Gelectrode as well, pinging once for each Wisps cast ... crazy. Kiln Fiend, which I added, seems really absurd as well. And Tidewater Minion is the perfect add: A defender that can go infinite with Splinter Twin. Tap the Splintered Minion to copy itself. Use the hasty copy to untap the original and so forth. Ventinel for the win!

I just want to know ... will a Splintered Arnold Schwarzenegger create a Danny Devito token?

Now, let's insert some insanity into our everyday From the Lab column. Here's an ominous disclaimer: I like concepts. I like crazy wins out of nowhere. I don't expect this deck to be built ... ever. 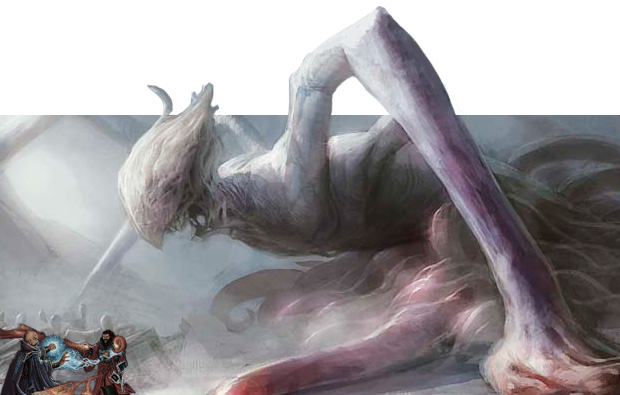 I covered Spawnsire of Ulamog a while ago, and did some fun things with it and Doubling Season and Essence Warden. However, I received an email concerning it from Aaron Eichenberger that suggested the craziest Eldrazi combo of them all. Take it away, Aaron:

"And by 'Crazy Eldrazi Combo', I mean crazy, huge, ungainly, almost unworkable combo. But those kinds of combos are usually the most fun to try to pull off, right?

Have Battle of Wits and Spawnsire of Ulamog on the battlefield. Activate the Spawnsire's ability to cast 201 copies of Emrakul, the Aeons Torn. The legendary rule will send all but one of them to your graveyard (in pairs, as they resolve), where they will all be promptly shuffled back into your library. During the next of your upcoming 201 extra turns, Battle of Wits will trigger and win you the game.

Alternately (since you will probably have some other cards in your library to count towards the Battle's 200+ win condition) you just worry about having the Spawnsire on the battlefield and use one of the extra turns to play Battle of Wits safely. 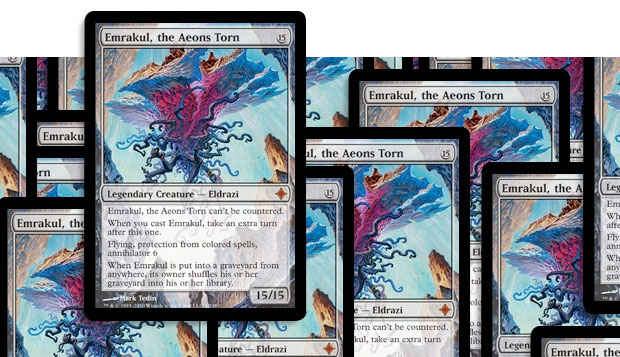 What do you think? Crazy sauce, right? I think it would be totally worth the expression on your opponent's face to make it happen. :)"

Yeah, that's crazy sauce, all right. This combo works primarily because you can find any amount of Eldrazi cards with the Spawnsire in casual play (including more than 4 copies of a card).

I think someone should start a petition to collect physical copies of Emrakul, the Aeons Torn just to potentially pull this off one day. I'm a big fan of adding cards to my library for some purpose (the Invincible Hymn deck I made a long while back is testament to this) as well as winning out of nowhere, and a sudden influx of 201 cards to a normal deck that randomly has Battle of Wits out, speaks to my hidden (or not so hidden) crazy self.

I'm not going to include a deck list here, but if you were to, I'd suggest a blue-based control and mana ramping deck. The first goal should be to stabilize until you can drop Spawnsire of Ulamog. After that, it's a race to 20 mana while protecting your Eldrazi. The Time Spiral storage lands and the UrzaTron should be useful.