ello and welcome back to the Lab! This thematic week is celebrating all things Phyrexia. Two weeks ago we had Mirrodin Week, and now we're in the dark mirrored image of that week. Phyrexia stands for all things grisly and horrifying, and just one drop of oil is enough to change the course of a plane's history.

When I first learned that the Scars of Mirrodin block would feature Phyrexia as the villainous force, I inwardly rejoiced. I'm not trying to betray my chosen side of the Mirrans here, but merely expressing my joy at the comeback of Magic's most longstanding villainous force. Now a cornerstone of two generations of Magic, the name Phyrexia will, I'm confident, continue to invoke terror throughout the Multiverse.

What's Hsi? No idea, but it makes the palindrome work. Think that's lazy? ...Okay, I don't have a comeback for that one. Low blow, self. 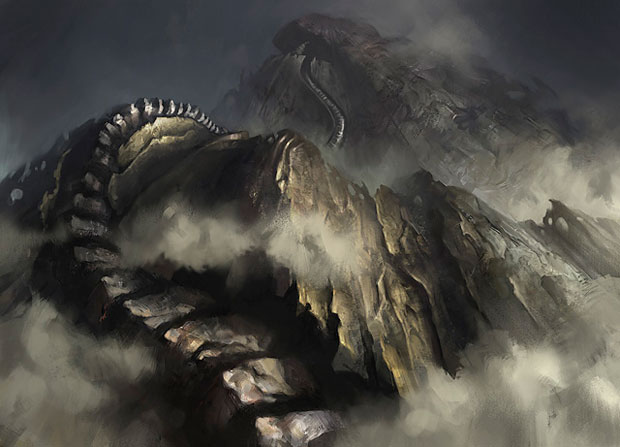 Anyway, the goal of any dedicated Spine deck should be to destroy as many permanents as possible. Mana acceleration (since seven is quite hefty) and some way to rebuy my Spines are required. You know what, though? I'm going to combine those attributes into one versatile card: Master Transmuter.

I got to preview the Master, and am still tickled pink by its numerous interactions and strategies. It's a great card, and Spine of Ish Sah turns it into a back-breaking machine gun. You can initially cheat out the Spine with the Transmuter a la Elvish Piper (returning any cheap artifact to hand) and destroy something. From there, you have an absurd combo that reads, "

: Destroy target permanent." This works because you can Transmute out the same artifact that you returned to your hand. Now throw Filigree Sages into the blender. The resulting frappé is a repeatable engine that reads, "

: Destroy target permanent." Voltaic Key is a similar card that won't create an engine, but can untap Master Transmuter on the cheap. Destroying two permanents a turn should be nigh insurmountable for your opponent, especially if you can land the combo early. Turn one, Island, Voltaic Key. Turn two, Island, Etherium Sculptor. Turn three, Island, Master Transmuter. Unless your opponent exploded out of the gate, destroying two of his or her lands a turn should lead to a quick victory. 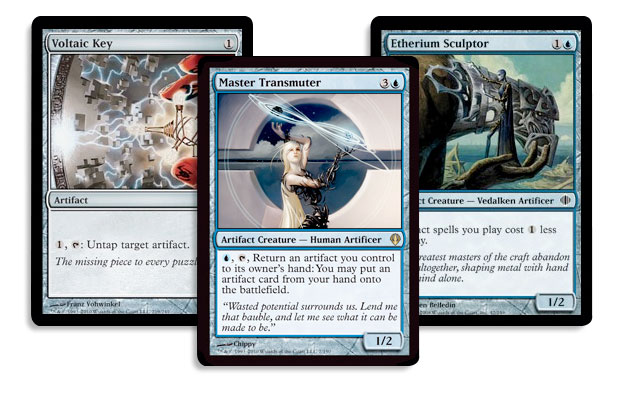 We'll need some card filtering. Faerie Mechanist is fun to bounce and replay with the Transmuter, netting an artifact and clearing the top of your library with each pass. Treasure Mage can find the Spine as well as other crazy artifacts to Transmute out early. How about Bosh, Iron Golem? Throw a Spine at your opponents face and promptly get it back in your hand. And not only is Myr Battlesphere a fine singleton, but it references Phyrexia! (Sorta. Sphere?) Blightsteel Colossus is the new obligatory bloated beatstick that can be Transmuted out early, so in it goes.

Esperzoa can return Ichor Wellsprings to your hand in the early game, and in the late game it can bounce Spines and Battlespheres. Finally, Sculpting Steel is flexible with all the decks aspects.

That should satisfy the "new Phyrexian card" requirement that I set up for myself. Let's bridge the gap now by examining an oldie but goodie that happens to have undergone the new-card-face makeover. I speak, of course, of Phyrexian Processor. This card is among the many reprints from older sets that have popped up in Dual Decks and multiplayer products. I love that select older cards are being reprinted more frequently—but I digress. 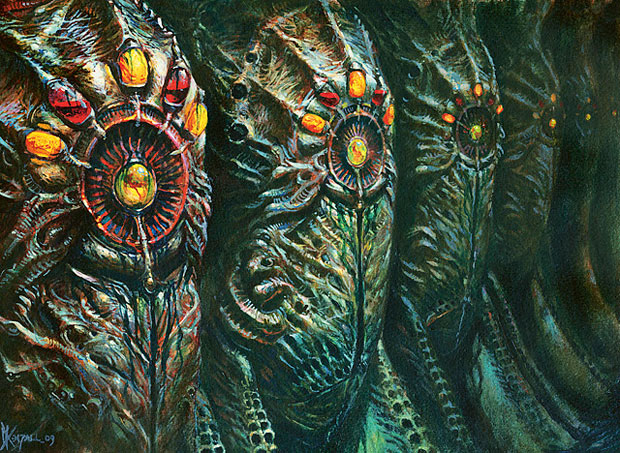 Now that Phyrexian Processor has new art and the slick new card face, I'm going to officially bring a classic combo to the new generation. Way back during Urza's Saga (when the Phyrexians were up to no good (down to bad?)) there was a great duo that eventually churned out massive amounts of life and huge creatures. The matching card was Angelic Chorus. Pay ghastly amounts of life to the initial Processor, gain it all back with the first Minion token, and then proceed to absurdity.

I just think its pleasing to play this combo nowadays, with both pieces sporting new art and the new card face. Plus, it's a blast from Magic's past! What's wacky about the combo is that after you spin it for a bit, you'll have a ton of life, at which point subsequent Phyrexian Processors can safely churn out 40/40 Minions. Just for kicks.

Recently, we've gotten another white five-drop enchantment that combos perfectly with Phyrexian Processor: Near-Death Experience. Process all of your life but one measly point and win the game on your upkeep!

Diverting back to Angelic Chorus, I'd love to have other creatures with high toughness in the deck. Preferably cheap ones. And it's Phyrexia Week. All these signs point to Phyrexian Soulgorger, which warps the deck hilariously. This 8/8 for three needs lots of souls to gorge, and Spectral Procession literally provides them! (Wow, two Processes in one deck. I love the universe. And yep, that's two columns in a row with cumulative upkeep, after a ton without. Infinity is awesome.)

You can stall with defenders early. I went with this strategy because Angelic Chorus likes the toughness, they're creatures to feed to the Soulgorger, and because stalling is probably necessary. Wall of Omens is a great colorshift of the classic Wall of Blossoms, Perimeter Captain ties into the life-gaining theme, and Roc Egg makes backup tokens for the Soulgorger.

Some fun singletons in the deck include Fountain Watch (which protects your key artifacts and enchantments), Angel's Grace (which saves you from a Lightning Bolt during that brief window where you have a low life total, and is nice with Near-Death Experience), Cradle of Vitality (why not?), and O-Naginata (which bestows trample to your huge creatures!).

Two down. I started this last deck's creative process (wow) with a search for a strange old Phyrexian rare to build around, this one from the Phyrexians' turn as the bad guys in Invasion block. I came up with Phyrexian Infiltrator, which is a pretty interesting creature. For

, you can swap it for any creature on the board. Of course, your opponent can do the same... if he or she has blue mana! You've come prepared with Islands, of course. 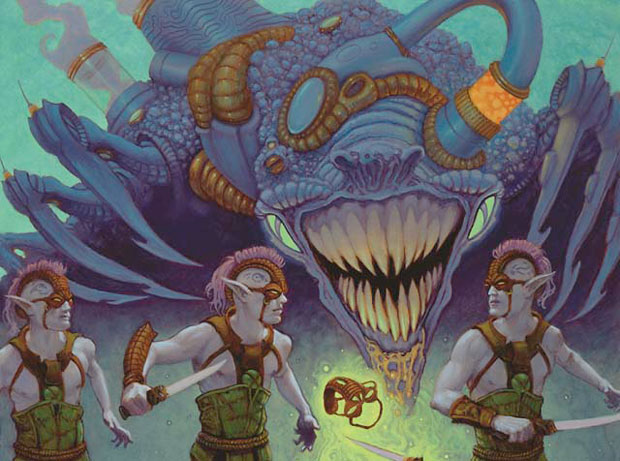 Let's say your opponent does unfortunately have blue mana sources. You could go after these sources with something like Contaminated Ground (the black Spreading Seas). Or you could just shut off the Infiltrator's ability with Phyrexian Revoker (ring that theme bell!). Wait until you nab a sweet creature, and then Revoke your opponent's Infiltrating rights. 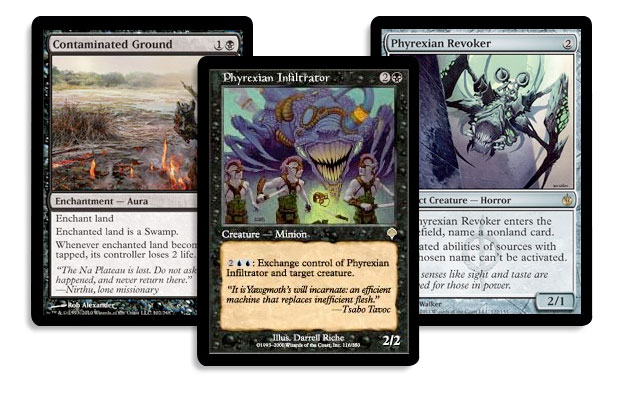 Bounce is a great trick here. Steal a creature, then send the Infiltrator back to your hand with Unsummon. Even better, Mark of Eviction can repeatedly do this (when it's not playing havoc with your opponent's creature stability).

But the coolest play with Phyrexian Infiltrator involves a bit of stack trickery. Let's build the situation. You've got eight or so lands and some creatures. Your opponent has just dropped a bomb creature and it looks menacing. (Insert bomb creature of your choice (Bomb Squad?) (...I hate you).)

and target one of your creatures. Preferably, a mediocre one. In response to that, pay

and target your opponent's awesome guy. Let that resolve, and you'll Infiltrate like normal. Then the other ability resolves, and the Infiltrator switches back to your side, jettisoning your mediocre creature to the enemy. That gives you "

: Swap any two creatures." (Note: your opponent can turn the tables on you if he or she has

available.) Okay, that appears clunky. Insert Training Grounds to cut this cost in half! Now it's "

: Swap any two creatures." Much better.

Training Grounds warps the deck further. Now I need activation costs to reduce! I've always had a soft spot for the Guildmages of Ravnica block, and Dimir Guildmage steps out of the shadows to do good work in this deck. Yes, that's "

: Counter target activated ability." Normally pretty narrow... unless we ensure there are activated abilities to counter. You know, like Phyrexian Infiltrator's once you've given it away!

to transform into anything. Copy your opponent's awesome creature, and then bounce the original for a weird causation puzzle. (It's a copy of something that doesn't currently exist! Whoaaaa!)

We need mediocre creatures to give away, right? I decided the living weapons were perfect fits this week. Go ahead and swap your Flayer Husked Germ token. Since you still control the Equipment, you can pay

any time you could cast a sorcery to equip it to something you control, snuffing out the Germ in the process (!).

Besides useless Germs, you could also give away creatures that are great for you but average for a less prepared opponent. Any tribal effect is an example. Aphetto Grifter should be effective for me, but not for my opponent. And the Grifter in particular has synergy with the Contaminated Ground that you all forgot about by now! And all my Guildmages are Wizards! Diviner's Wand could get bonkers here, especially with Training Grounds out. 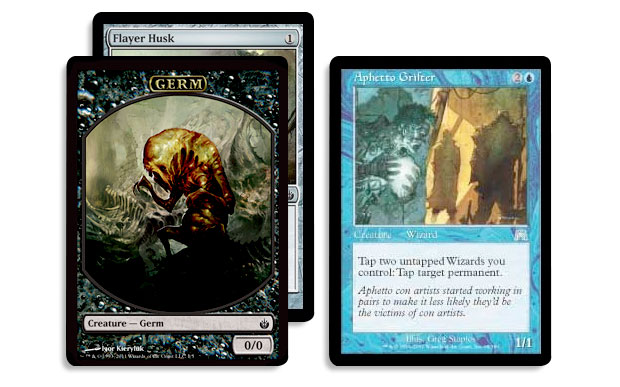 Lots of ingredients, one unique deck!

Well, that's all for this week. Until next time!