elcome back to the lab! We're here in week two of Journey into Nyx previews, and I've got a pretty special one to show off today. It takes a new mechanic and combines it with one we haven't seen in nine years.

Something Old and Something New

Inspired is a tricky new mechanic that requires you to find a safe way to tap your creatures. Attacking works, but also puts the creature in danger of being killed by blockers, especially when dealing with a small creature like this one.

The second mechanic is a bit more subtle, especially if you weren't playing during the original Ravnica. In that set, the Dimir guild's signature mechanic was called transmute. As a sorcery, you could pay three mana and discard a card with transmute from your hand to search your library for a card with the same converted mana cost.

Disciple of Deceit takes a bit more work to get going, but once you have a way to tap it, it allows you to transmute any card in your hand, potentially allowing you to search your library for just about anything. It can also be used repeatedly to sculpt the perfect hand, or to put together a sweet combo.

Although Disciple of Deceit could really help you assemble any combo you want to, I wanted to take advantage of the ability itself. The first card that came to mind was Necrotic Ooze. By focusing the deck around a converted mana cost of four, you can discard one creature to find the next, eventually putting the Ooze in your hand with all the creatures you need in your graveyard.

There are plenty of creatures that form combos with Necrotic Ooze, but the trick was finding a set where every creature had a converted mana cost of four. Eventually, I managed to put together a pretty good one. Argothian Elder gives Necrotic Ooze the ability to tap itself to untap two lands, effectively producing two mana. Simic Ragworm then lets the Ooze untap itself for one mana, giving you an infinite amount of mana to play with.

After that, you have a number of options, but in keeping with the tapping and untapping theme of the deck, I chose to use Cackling Imp. With it in the graveyard, you can tap Necrotic Ooze to make your opponent lose 1 life, then use your infinite mana to untap the Ooze repeatedly.

To put the combo together, you'll need a way to tap Disciple of Deceit without it dying in combat. Maze of Ith is a great option for this, allowing you to simply attack with the Disciple and then remove it from combat before it dies. Since it also untaps the creature, you trigger the inspired ability immediately, and you can use one of the other methods of tapping the Disciple to get another trigger at your untap step.

Paradise Mantle and Springleaf Drum both leverage the Disciple for mana production, allowing you to cast your four-mana spells on turn three as well as tapping the Disciple, to trigger inspired next turn. Cerulean Wisps can give you an extra inspired trigger along with an extra card, accelerating your game plan.

Now, you'll need an assortment of four-mana spells to discard, and maybe to search for as well. The easiest option is Diabolic Tutor. It can search for Disciple of Deceit if you don't have it, and if you do it can be discarded to search for something else.

Protective Bubble can give the Disciple shroud, protecting it from opposing removal spells. Unfortunately, it protects it from Maze of Ith as well, but since it's now unblockable you still don't have to worry about opposing creatures.

Foil can counter a spell, potentially for free if you have an Island to discard. Cryptic Command is another counterspell that has several other uses, from buying you a turn against attackers to temporarily removing a problem permanent.

Snuff Out is another spell that can be cast for free, allowing you to destroy a creature at instant speed even if you don't have any mana open. If you do have mana, you can search for Control Magic to steal the creature instead of killing it.

Sever the Bloodline deals with creatures that Snuff Out won't hit, and with flashback it can be cast even if you discard it to search for something else. If you have an army of creatures to deal with, Damnation is happy to take the job, and Whelming Wave can set your opponent back several turns without killing your Disciple of Deceit.

Two to Two to Twenty-Two to You

The other idea I had was finding a way to infinitely tap and untap Disciple of Deceit. This part wasn't very difficult at all, with classic combo tools Pemmin's Aura and Freed from the Real enabling you to untap the Disciple for just one mana each time. By putting Karametra's Favor on the Disciple, you can tap and untap it as much as you want, allowing you to transmute as much as you want for free.

What's the endgame here, though? At first I thought about using Mortal Combat, transmuting four-cost creature into each other until you hit twenty and cast the enchantment to win the game. However, I shied away from this idea for two reasons. For one, I've used a similar idea with Mortal Combat before, when I previewed Enter the Infinite last year. Second, the other deck I put together today is already based on cards with a converted mana cost of four, and I wanted to try a different number.

Attacking is slow, however, and gives your opponent the chance to block or cast a removal spell. Instead, why not win the game immediately? Rite of Consumption will allow you to do just that, sacrificing a creature to deal damage equal to its power to your opponent.

Rite of Consumption has a converted mana cost of two, however, which doesn't fit in with the Nighthowler plan. Fortunately, there's a similar creature that costs one less: Boneyard Wurm.

Since this combo requires a few pieces to get going, I've included some of the old transmute cards to find Disciple of Deceit and Karametra's Favor. Muddle the Mixture, Shred Memory, and Dimir Infiltrator can be discarded to find either, and Muddle the Mixture has the added benefit of being able to counter spells that might kill the Disciple.

I also added Diabolic Intent, which can be transmuted to, in turn, search for Pemmin's Aura or Freed from the Real. Sacrificing a creature shouldn't be a problem, since the deck will be playing more than twenty.

Speaking of which, it seems I'll be needing a few more creatures. Although a pile of creatures this big on top of what's already in the deck will push the list well over sixty cards, it shouldn't be a problem with so many ways to search your library.

Twenty-four creatures in total should be enough. That gives you one Disciple of Deceit and one Boneyard Wurm on the battlefield, and a couple extra for wiggle room. I also want to stick to creatures that can sacrifice themselves, just in case you want to cast some and they don't end up dying before it comes time to combo off.

Alchemist's Apprentice can sacrifice itself to draw a card, helping you get through your deck that much faster. Sakura-Tribe Elder also gets you an extra card in the form of a land on the battlefield. That extra mana can come in handy when the critical turn comes and you need to cast several spells in succession.

Spiketail Hatchling looks like it can counter a spell, but more often what it does is force your opponent to pay an extra mana for everything, trying to avoid letting you counter anything. Secretly, this is almost as good, slowing down your opponent's game plan significantly. 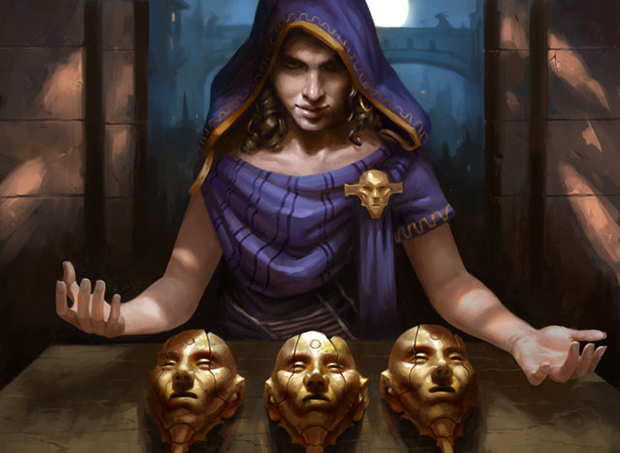 Disciple of Deceit | Art by Daarken

For one of my next articles, I'll be borrowing an idea from the great Mark Rosewater over at Making Magic. On occasion, he has done an article type he calls Topical Blend, in which readers separately vote for a Magic topic and a non-Magic topic. Mark then combines the two to create an article. These have proven to be some of my all-time favorite articles, so I thought I'd do something similar here.

At the end of this article there is a poll that contains a number of non-Magic topics to choose from. I'll be collecting votes over the next two weeks. After that, I'll take the most popular topic or topics and write about it/them. Then comes the hard part. Sticking with the same idea, I'll create a combo deck that somehow relates to the topic or what I've written about it. It may be a play on card names or an overall theme, but I'll work it in somehow.

So, without further ado, here are the topics you have to choose from. Pick the one you think would be the most interesting, the most embarrassing, or the most fun. Whatever your criteria, choose wisely. After all, the fate of the lab rests on your shoulders.