ello and welcome back to the Lab, a place I share with all of you as a haven for manic Johnny twirling. Sometimes I think of it as my weekly getaway from the bristly strands of the real world. I find it fun to hop into these words each week and see what I can rustle up. Occasionally I have the twinkle of a theme week to guide my stride. This week, for example, contains the first website-sanctioned whiff of Planechase (2012 Edition), a product that definitely snuck up on me.

I mean, Avacyn Restored is not exactly fading into my rearview mirror. The set still jumps with energy from my point of view, and I'm sure I'll find a blank week or two soon to continue discussing its merits. (Time will tell if this year's warm-weather releases match the madness of last year's New Phyrexia—Commander—Magic 2012 coolness overflow.) For now, though, I've got a couple of fun-looking cards to preview from Planechase today. Yep, that's two previews in one day!

I'll set up the first one. Naturally, it makes sense to lead off with a new plane card. Those gorgeously rendered sideways oddballs are the oiled machinery that enables this format to tick. They also function as snapshots of realms both well traveled and undiscovered. My preview plane falls in the former category. It's a place I'm quite excited to revisit this fall... 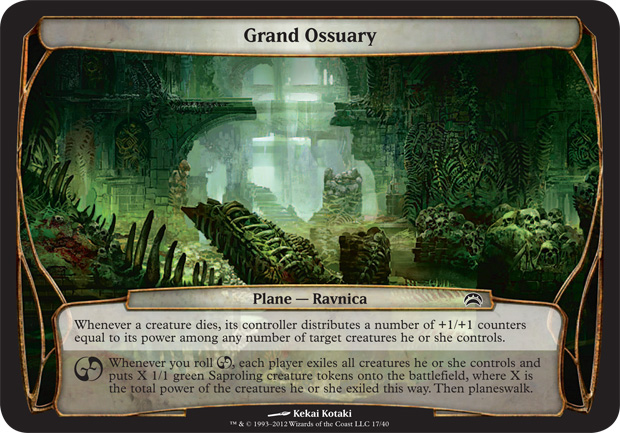 Now, a card like this would normally make me sink into my egg chair and twitch feebly to commit its effect to my mind. I mean, an insane creature death trigger that spews +1/+1 counters to the rest of my team? Okay, sure. And an unprecedented Saproling-spitting ability that has synergy with said +1/+1 counters, and sort of is also a Final Judgment? Um, big time wowzers.

But the fact that Grand Ossuary is a plane neutralizes its potential a bit. Due to the erratic behavior of the planes in a game of Planar Magic, there's no way to treat Grand Ossuary like any other combo piece. It'll show up and vanish, all on the gossamer wires of randomness. 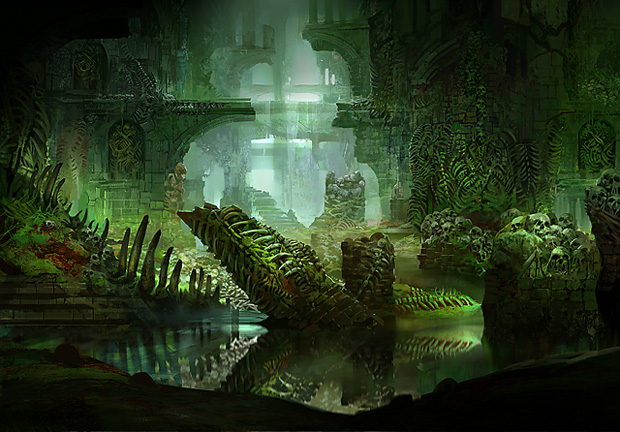 Still, Grand Ossuary is ultimately too tempting to flat-out ignore from a deck-building point of view. So I'm going to attempt to build a normal sixty-card deck that interacts well with the Ossuary, and then fill out the rest of the accompanying planar deck.

Grand Ossuary requires a couple different variables to succeed. For one, you'll need a ton of creatures on the board to capitalize. Token generators can congest your side of the battlefield with 1/1s. Then, you'll need a high-powered creature to die and scatter +1/+1 counters everywhere. My mind leaped to the evokers of Lorwyn. Walker of the Grove makes a beefy token and has 7 power, and Spitebellows is a great bit of removal that now doubles as a super Blessings of Nature.

The Ossuary's "ultimate" is hard to anticipate, but it should swing the tide in your favor every time. And if it spits out seven or more tokens? Sounds like an ample time for Burn at the Stake! (And with all the tokens in the deck, it's a threatening card.)

3 Master of the Wild Hunt

1 Walker of the Grove
37 Cards


I went with a mix of Goblins, Eldrazi Spawn, and Saprolings as my token forces. Master of the Wild Hunt can clog the battlefield with Wolves, and sic them on an oppressing creature if need be. Mycoloth is the bombastic centerpiece of the deck, both sacrificing creatures (and thus triggering the Ossuary) and creating a bunch of tokens. I initially had four, but eventually realized that this was the perfectly timed opportunity to use Thromok the Insatiable. Talk about a square meal. 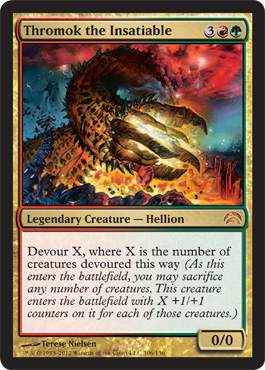 Now for the planar deck.

I went with a range of effects here. Some of these planes are conducive to token strategies, such as Goldmeadow, Krosa, and the doubling-y Selesnya Loft Gardens. Feeding Grounds was a perfect fit. Sea of Sand and Panopticon seem fun to me. And it wouldn't be my kind of planar deck without some über-wackiness. The Æther Flues and Pools of Becoming are just ridiculous. On a similar note, I couldn't resist adding Spatial Merging, a card that's ripe for shenanigans. 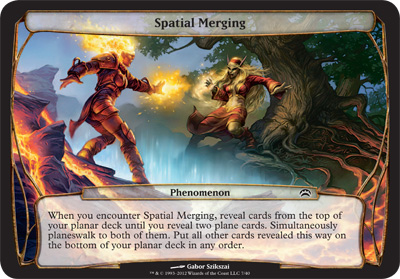 Woot! One preview down. Now for my other one. Unlike Grand Ossuary, it's a regular card, in the sense that it can be utilized in normal Magic games. (Or non-Planechase, if you prefer.)

Planechase (2012 Edition) marks the second time new cards were designed for a release outside of the standard Magic calendar (the four seasonal sets). The new Planechase cards are so far dripping with the same zany substance that coated Commander, the set that first blazed this trail of multiplayer-tinged effects. The sheer audacity of these cards has yanked my jaw right off. Like, I can't put it back on. Vela the Night-Clad helps certain decks court infinity through not one, but two means: mass-intimidation and mass-bleeding triggers. Krond the Dawn-Clad made me quiver a bit... and that was just the converted mana cost. (Then I read the ability, and continued quivering.) Perhaps my favorite card so far, though, would be Silent-Blade Oni. Ninjutsu is an all-time favorite mechanic in my book, and I'm glad it was chosen to return in Planechase (alongside devour, totem armor, and cascade).

It's on this ninja note that I return to the issue at hand: unveiling . 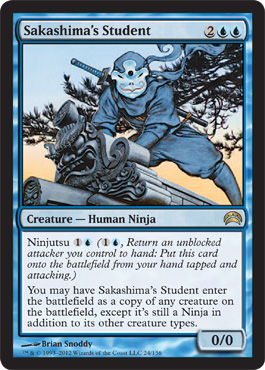 Ooooo... zesty! A Clone Ninja! Sakashima the Impostor certainly teaches her pupils well. That creepy Guy Fawkes-styled mask is given only to graduates of her discipline of duplicity.

Sakashima's Student slides into a bunch of casual deck archetypes, due to the flexibility of the ninjutsu mechanic. Happily, it still retains its Ninja creature type, which enables various Ninja tricks. Higure, the Still Wind, for example, can grant it a free trip into the red zone each turn. That trick seems ripe for abuse if Sakashima's Student was a copy of, oh, Raven Guild Master, or Shimian Specter, or Mindleech Mass, or any other delicious saboteur. Walker of Secret Ways, meanwhile, is a stellar way to bounce the Student back to your hand if need be. 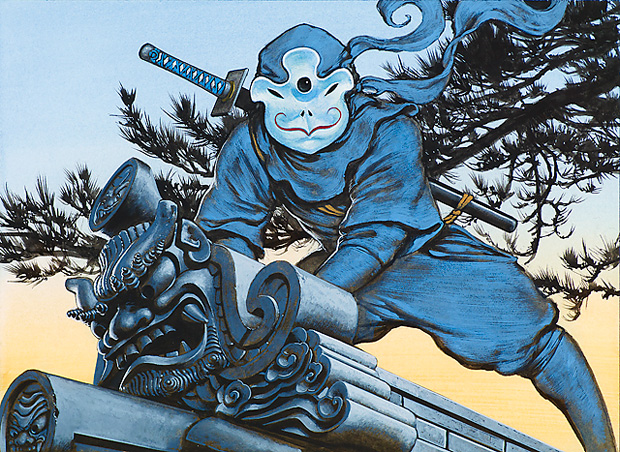 My favorite hidden aspect of Sakashima's Student is that, minus the ninjutsu ability, it's basically a Clone. (Okay, with one extra

requirement.) Clones are generally practical in a multitude of decks, so the Student might be in the conversation of creature copying from here on out. (Although it narrowly misses out on being a part of 2011, the year of the Super Clones—Phyrexian Metamorph, Phantasmal Image, Evil Twin.)

How about two decks featuring the Student? As I've alluded to, the card is quite open-ended. The first is a suave update of my real-life Ninja list. (As I typed that, it sort of just hit me: There are new Ninjas. NEW NINJAS!!! Hmm... I can be slow to react to stuff...)


I'm sure I've jumped the gun here, as there are bound to be more cool Ninjas in the upcoming Night of the Ninja deck. Oh well. Excitement is sort of pushy.

The final deck is a blue and black discard-based deck. Oona's Blackguard was an amazing find. Ninja in the Student and copy it. The real Blackguard will catch the fake one and give it a +1/+1, and when it hits your opponent, both of their triggers will occur. So, double the discard! Other fitting Rogue cards include Thieving Sprite and Noggin Whack.

Whilst trawling the saboteur cards, I came across Guul Draz Specter and promptly made it the deck's finisher. Even if you have a Student already out (copying something else) a Nephalia Smuggler (which is a Rogue!) can flicker it. The Smuggler can also exile a mystery facedown card, which will return as a Silent Specter. Nezumi Shortfang was a neat addition as well. Finally, as a Rogue herself, I couldn't resist adding Sakashima the Impostor.


Well, that's it for this week. Until next time!