ello! Come on in, take a seat. The show is about to begin.

I asked all of you to send me some cool decks built around your favorite Dragon's Maze cards. I received quite a number of responses, and paring all the great submissions down to just a few decks was tough, but in the end, there could only be so many winners. So, here they are, the best of the bunch, my favorite decks of the favorite decks. 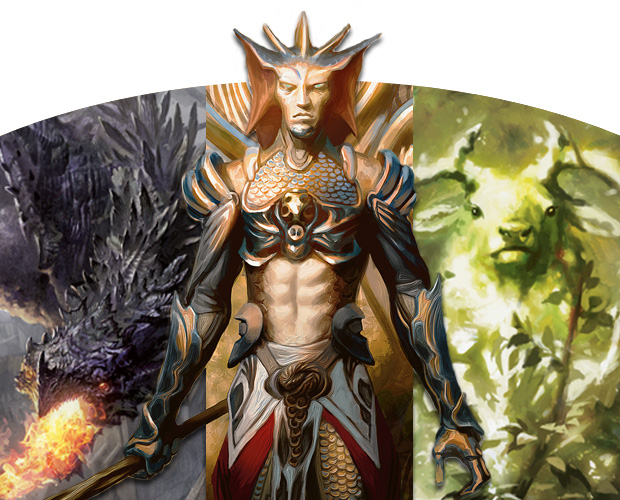 The first deck that caught my eye was sent in by Elliott Dent. Elliot took Vorel of the Hull Clade, a Johnny-tastic card I've been eager to put to work, and combined him with cards like Darksteel Reactor and Azor's Elocutors that simply win the game once you have enough counters. Vorel will drastically shorten the time it takes to reach that threshold, and Paradox Haze will give you two upkeeps, giving you an extra counter every turn for free. Paradox Haze is one of my favorite oddball enchantments, and it never ceases to amaze me how many times it comes in handy. Elliott also included Illusionist's Bracers, a card that will always be near to my heart, to double Vorel's doubling ability.

Dispel is an easy way to protect your combo from disruption, only requiring you to leave up a single blue mana. Mana Leak can also be used to stop removal spells, but where it really shines is in its ability to counter your opponent's big spells, slowing down his or her game plan and giving you time to execute yours.

The deck gains a lot of flexibility from having both Darksteel Reactor and Azor's Elocutors as potential win conditions. Darksteel Reactor is slow and steady. Being indestructible makes it difficult to get rid of through normal means, and there's no built-in way for your opponent to remove counters from it. Although it requires a massive twenty counters to win the game, Vorel can usually make that happen in about four turns, or half that time with Illusionist's Bracers. Azor's Elocutors, on the other hand, is much more vulnerable, but makes up for it with a great increase in speed. It only needs five counters to win the game, so Vorel can get it there in two turns. If you have Paradox Haze and Vorel equipped with Illusionist's Bracers on the battlefield, you can win the game the turn after you play it, putting it straight from zero to five without making you worry about whether or not your opponent can deal damage to you.

Our next deck comes from Benjamin Whiteman. He found a creative way to take advantage of Voice of Resurgence, using the classic combo-enabler Phyrexian Altar, as well as a Beast from Conflux that's usually found in Timmy decks with hoards of giant creatures, not at the center of an infinite combo. The idea of creating a combo with cards usually played for their value intrigued me, and Benjamin gets bonus points for finding a combo I had not yet considered.

Avacyn's Pilgrim gives you one of the extra creatures you need to make the combo work, as well as accelerating your mana production to get Paleoloth into play sooner. Raise the Alarm, Gather the Townsfolk, and Fists of Ironwood also all provide extra creatures. Enlightened Tutor makes another appearance here, this time alongside Eladamri's Call, helping you search up the combo pieces.

Surprisingly, Dragonshift was the most popular centerpiece in the submissions I received. Quite a few players were excited to use the card as an Izzet Overrun, turning a horde of various tokens into a draconic army of death. However, two aspiring players came up with more creative ways to use the card.

The first was Dom Camus, who grabbed my attention with this line:

"So, here's the short summary of what the deck does: Dragons with hats!"

Now that's something that warrants a closer look.


Dragonshift removes your creatures' abilities, including defender, and doesn't affect +1/+1 counters. Therefore, Vigean Hydropon, often affectionately referred to as the hat rack for its ability to do nothing but stand there and allow your creatures to take +1/+1 counters from it, suddenly becomes a 9/9 flying Dragon, with no silly "can't attack or block" ability.

Birds of Paradise and Axebane Guardian produce mana before turning into Dragons, and Gatecreeper Vine searches up basic lands or Gates to ensure you have the colors of mana you need. Axebane Guardian is particularly powerful here, producing large amounts of mana due to the other creatures with defender in the deck, and letting you create that mana in any combination of colors you want, making it easy to overload a Dragonshift.

Carven Caryatid replaces itself with a new card and does a great job of holding the ground while you assemble your army. Its 2 power is enough to kill many early creatures, and its 5 toughness will keep it relevant throughout the game. Slumbering Dragon is another creature that can't attack or block, but can build up a large number of +1/+1 counters, making it even larger when it turns into... well, a less sleepy Dragon.

There are also some other tricksy things you can do with this deck. Spikeshot Elder can deal damage equal to its power to any creature or player, and although it loses this ability when you cast Dragonshift, there is a way to get around that. If you activate Spikeshot Elder's ability a time or two, then cast Dragonshift with it still on the stack, the Goblin will become a 4/4 before its ability resolves, making it deal 4 damage instead of 1. You can also use Bioshift to give Spikeshot Elder all five of the +1/+1 counters from Vigean Hydropon, letting you kill just about anything. Bioshift can also put the five counters on a Slumbering Dragon, waking it up immediately and allowing you to attack with your new 8/8.

Dom included a very creative way to dig up a Dragonshift. A large Genesis Wave will give you a number of creatures to turn into Dragons later, and if you hit a Dragonshift with it, the instant will be put into your graveyard. Once Genesis Wave is finished resolving, if Eternal Witness is one of the creatures you put onto the battlefield, you can use it to return the Dragonshift to your hand, setting you up to kill your opponent on your next turn.

The other Dragonshift deck I'll be highlighting comes from Avery Garon, who decided that his opponent's creatures should bow before the might of his Dragons. With Humility on the battlefield, every creature is just a 1/1 with no abilities. Overload Dragonshift, however, and everything changes. Suddenly your 1/1s turn into flying 4/4s, and you're free to soar right over your opponent's puny minions.


With Humility on the battlefield, tokens such as those from Timely Reinforcements and Increasing Devotion stay exactly as they are, and living weapons like Batterskull and Flayer Husk become even larger! Electrickery turns into a two-mana Plague Wind, wiping out your opponent's entire army of 1/1 creatures, and Glory of Warfare makes sure even your 1/1s are larger than your opponent's.

Cyclonic Rift can help you buy time until you can get a Humility in play, and Emrakul's Hatcher can give you mana, chump-blockers, or a small army of 1/1s if you cast Humility afterward. Elspeth, Knight-Errant can also bulk up your army of little guys, and her Angelic Blessing ability lets you hop one of your creatures over for 4 damage once you've landed your enchantment.

A big thank you to all those who sent in their ideas for Dragon's Maze combos. I had a lot of fun reading through all the fun ideas you guys had, and I hope you all keep brewing up those wacky decks, even if yours wasn't one of the chosen few today. Also, the contest may be over, but if you think you have a great idea for a fun Johnny deck, send it in through the email link at the bottom of the page. I'm always looking for unique combos, and if yours catches my eye, I might highlight it here on From the Lab. Until next time, keep on brewin'! See ya!