odern Week? As in, a whole theme week dedicated to the latest Spike craze? How am I supposed to truly chime in? Easy: By chiming out.

Don't get me wrong. I applaud the decision making behind the new Modern format, in which everything printed from Eighth Edition forward is legal (corresponding to the change to the new card face). Magic's timeline was stretching a bit too much for some tournament formats, and a change seemed to be in dire need. Using the card-face switch as the starting point and calling the resulting card pool "Modern" was an elastic solution. I played Magic on both sides of the card-face fence, and when I progressed from Scourge to Eighth Edition to Mirrodin, I didn't blink too much. After all, it was the same awesome game. I must say I prefer the new face, however, and am very happy about classic older cards getting their face lifts in smaller releases like Duel Decks.

But with so much emphasis on Eighth Edition forward this week, and the Spiky fumes that thicken this week's cyber-air, I'm going to obstinately stand against this week's theme. You might have been expecting some Modern decks this week. Nah. How about Prehistoric decks instead? As in, decks solely composed of cards that were printed prior to Eighth Edition, in the old card face.

As far as deck building goes, this idea is somewhat akin to being immersed in a forgotten lagoon, with no current to direct me. My chosen card pool encompasses everything about Magic up until Eighth Edition. I might as well have traveled back to the spring of 2003. Eight years ago...who could have foreseen the whirlwind of change that shaped Magic into what it is now? And who knows what wonderful twists and turns this game will have taken eight years from now? Sometimes it's nice to stand back a bit and gaze upon the infinite limbs of this colorful tree.

I mean, where do I even start? It's like I'm standing at the nexus of an infinite intersection of pathways, each one fading into blue mist along the smeared horizon. I'm definitely aiming for crazy shenanigans. Let's see what cards from the olden days perk my Johnny senses. 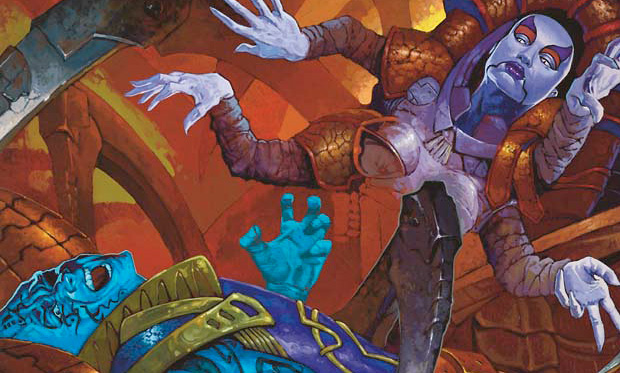 After about a second or two of thinking, I proudly present Phyrexian Altar. Those who follow my decks weekly, even obsessively (...are you guys real?) will recognize this card as a frequent combo-enabler. When New Phyrexia was on the brink of release, touting its "Phyrexia has spread to all five colors!" theme, my brain whirred instantly to a future in which the Altar was reprinted (it makes one mana of any color!). Sadly, that future didn't come to pass, but happily, this means I can use my favorite Phyrexian torture device today!

So I wish to go infinite with Phyrexian Altar, using naught but cards from the Era of Squinting. My options are still pretty open. To slicken the deck-building gears, I threw another old but effective combo piece into my pot: Verdant Succession. This Odyssey enchantment recycles your green creatures upon their death. With the Altar acting as my source of death, all I need is a way to put fallen creatures back into my library, preferably nestled within an actual green creature.

Nantuko Tracer! You exist! Hooray for Insects! Sacrifice a Nantuko Tracer to Phyrexian Altar, Verdant Succession finds another one, which puts the fallen Tracer on the bottom of your deck, and repeat for infinite mana. My mana sinks / victory conditions are either a simple Ghitu Fire to your opponent's head (at the end of his or her turn, no less!) or Nemata, Grove Guardian, which can churn out an infinite amount of Saprolings (and it's a green creature).

The deck needed two aspects. The first was mana ramping, preferably in the form of green creatures. Diligent Farmhand, Heart Warden, and Yavimaya Granger were selected out of my vast pool. The second aspect was staying alive, and my inconspicuous solution was Spore Frog. With Nantuko Tracers (and Krosan Reclamations) in the deck, I could have a succession of Spore Frogs, blanking my opponent's combat steps. This trick is effective, although not foolproof.

As a Plan B, I threw a green fatty that I could potentially ramp into and get back. After some thought (and really any one would do) I went with Stone-Tongue Basilisk. Threshold is definitely possible with this deck, but other than that, I just enjoy the card.

...but I'll settle for Telekinetic Bonds. Go on, check it out. It's just another long-lost combo piece that would be swirling down the dark drain of obscurity if I hadn't decided to save it this week. 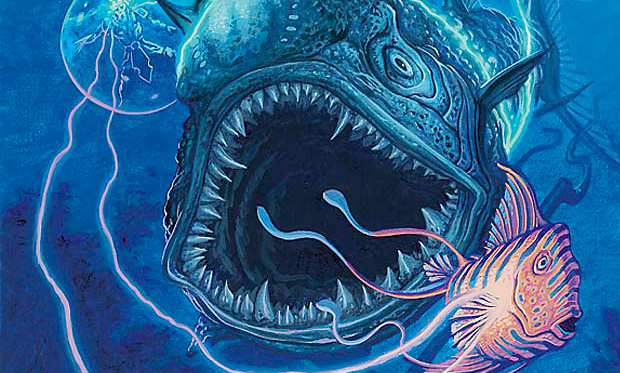 How to build around this interesting enchantment? Telekinetic Bonds says, "Whenever a player discards a card, you may pay

. If you do, you may tap or untap target permanent." Typing out long and complex abilities is helpful for me. It narrows my focus. What I see from this ability is a way to untap something repeatedly. Spicy. Now I need a way to discard cards repeatedly.

Something like Wild Mongrel wouldn't work, as I'd eventually run out. No, this card would have to replace the discarded card. Something like Compulsion. A brilliant little card, this enchantment can burn a hole of knowledge from your library to your mind. So now our engine is "

: Untap target permanent." Obviously, that's not good enough. Not yet.

I should probably figure out what I'm untapping. Ideally such a permanent produces lots of mana. After some search, I rediscovered Krosan Restorer. Once you're at threshold, the Restorer goes insane, tapping to untap three lands at once! But still, three lands does not

To recap the combo (and ward off potential confusion): Have Telekinetic Bonds, Mana Flare, Compulsion, and Krosan Restorer out at threshold. Tap a land to activate Compulsion. Tap another land to pay for the trigger from the Bonds (untapping the Restorer). Tap another land (garnering two mana) and then untap your lands with Restorer. Repeat, gaining two mana each time.

Finding a mana sink that interlocked with the rest of the deck's pieces was tricky, until I thought outside the box a bit. What if I didn't tap that third land for mana, but something else. Something like... a Squirrel! With Squirrel Nest on my third land, I could make infinite 1/1 Squirrel tokens out of nowhere! And since you're wheeling through your deck with Compulsion, eventually you'll find your lone Fervor and attack your perplexed opponent for the win. 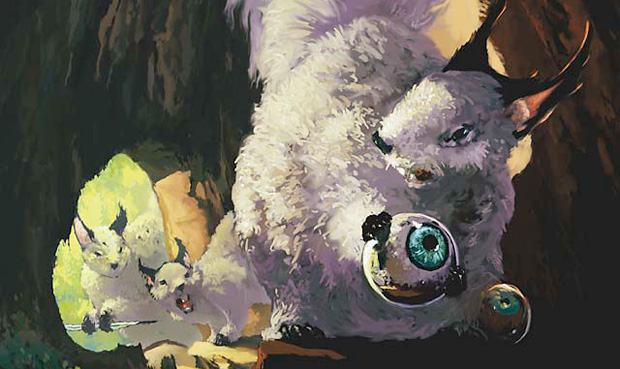 While adding support cards, I realized that most of my key cards were enchantments. My brain took a looping journey to Enchantress's Presence. This deceptive card has fueled many an enchantment-based deck by drawing numerous cards. Seal of Removal remains effective to this day. Rites of Spring helps me get lands and achieve threshold, and Memory Lapse is a soft counter that can help stall your opponent.

If I were to make a list of my favorite mechanics of all time, morph would be really, really close to the top spot, if not a surefire lock for number one. The effect of this ability on the battlefield is dazzling; the juxtaposition of a face-down card alongside a bunch of face up cards creates mystery. It's like the facedown creature is dreaming, in a state of infinite possibility (represented by the card back), and when it wakes up, some cool effect occurs due to the ethereal inspiration. 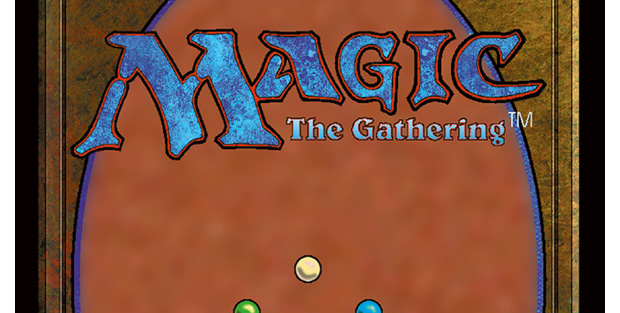 Morph premiered in Onslaught and carried on through Scourge. Then during Time Spiral's mass nostalgia theme, morph was one of the many returning mechanics. That block was basically a cosmic high school reunion of Magic cards at the Restaurant at the End of the Universe, during which morph teamed up with hellbent and did some serious catching up with Akroma.

I've built lots of morph decks in real life, often with the oddest maximum potential moments ever. One of my favorite real-life builds was a deck that sought to cast Natural Affinity and Ixidron on the same turn (or, more accurately, Turn to Mist on an already cast Ixidron, then Natural Affinity). This results in a board full of face-down 2/2s and a giant Ixidron. After pulling this off in a group game (and subsequently getting beaten down by my annoyed friends) a player in our circle who was relatively new to Magic remarked that it was the craziest thing he'd ever seen. I retired the deck in honor of his words (and the numerous calls 'round the room for banning the deck).

I needed a new morph-focused deck in my repertoire. I dismantled the Ixidron deck and started over (the Natural Affinitys got shuttled into my soon-to-be-physically-assembled Elesh Norn, Grand Cenobite deck.) After surfing Gatherer and staring at the words on the screen for some days, the light bulb sparked overhead. I had found a way to take infinite turns with the most unexpected morph cards.

The following decklist isn't my actual list, as I had to accommodate today's pseudo-theme. My actual list also doubles as a sneaky theme deck, based around a film I greatly enjoy. I'm about to spell out this combo for you; see if you can guess the film! 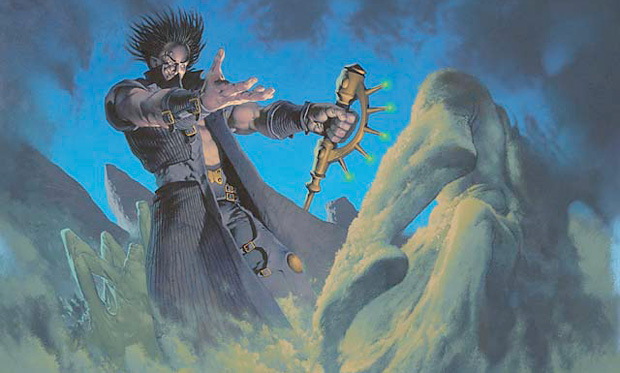 BUT WAIT! Freeze it! In this achievable situation, you control a creature, but have no idea what it is. Your own guy is a mystery to you. Isn't that a little wonky?

Then you look at it. Guess what? You just broke into your own mind.

Oh, and the card is Unstable Hulk. That should be a jarring surprise. Good thing you're not going to turn it face up... except when I use Ixidor to turn it face up for you. Okay, turn lost, but can I keep this up forever? OF COURSE I CAN.

On my next turn, I have Ixidor flip up Weaver of Lies, which turns Unstable Hulk face down again. Ixidor strikes again, and I get another turn. This time I unmorph my last face-down card, which is another Weaver of Lies. The first one and the Hulk flip back down, and now I'm infinite.

As an actual player of this combo in physical Magic, I should admit that putting a five-card combo together is tricky. When it works, though, I revel in the moment. That's what being a Johnny is all about.

Thornwind Faeries deals infinite damage as a win condition. If people are interested in my actual list for this deck, let me know and I'll include it in a future column. Either way, until next time.