elcome back to the Lab, folks! We've got another week of Dragon's Maze previews lined up for you here on DailyMTG, and I get to help kick it off with a sweet card for Johnnies everywhere. Progenitor Mimic follows in the footsteps of a card from the original Ravnica, but definitely kicks it up a notch, Simic-style. 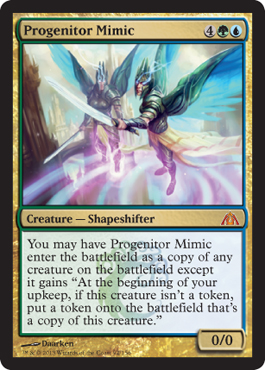 At the most basic level, Progenitor Mimic is a Clone. It enters the battlefield as a copy of whatever creature you want, whether it belongs to you or your opponent. If you have the best creature on the battlefield, now you have two. If your opponent does, now you have one to match it. Of course, Progenitor Mimic doesn't stop there. If it survives until your next upkeep, you'll get a copy of it. Your opponent's best creature doesn't look so threatening when you have two copies of your own. Or three. Or four.

This is From the Lab, however. Why would we want to settle for an army of our opponent's best creature when we can copy something silly from our own deck? Some creatures become far more powerful when you make copies of them, and Progenitor Mimic is perfect for taking advantage of that.

Lord of the Clones

The first things that came to mind were the various tribal lords. Creatures like Lord of Atlantis and Lord of the Undead give a bonus to all other creatures of the same type. Although a single Lord of the Undead is a 2/2, a pair of them become 3/3s, three are 4/4s, and so on. The more you have, the bigger they are. After sorting through a number of tribes, including Merfolk, Shapeshifters, and artifacts (with Master of Etherium), the one I went with was Elves. 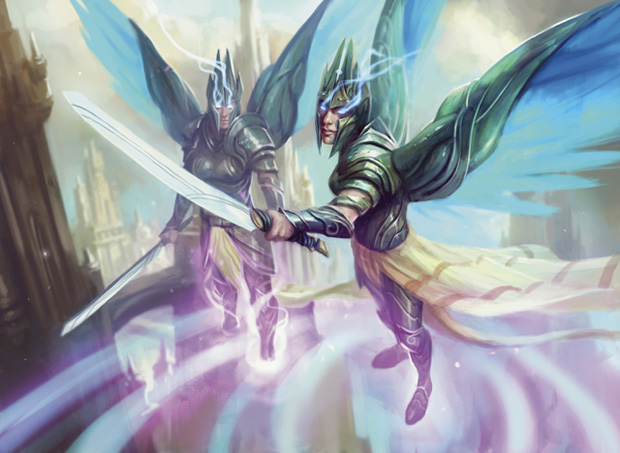 Elvish Archdruid not only makes all your creatures bigger as you get more copies of it, it will give you a ton of mana as well. If you get up to four Archdruids, not only will you have a quartet of 5/5 creatures, you'll have access to sixteen extra mana, and that's with no other Elves on the battlefield.

Priest of Titania doesn't make your Elves bigger, but it does give you access to the same abundance of mana as Elvish Archdruid. At only two mana, it can come down early and curve right into an Archdruid before tapping to give you mana for another Elf or two.

You'll need something awesome to cast with all this mana, of course, and Genesis Wave definitely fits the bill. It will likely dump quite a few Elves onto the battlefield, with several lords to pump them up. You might even get a Progenitor Mimic or two as an added bonus.

Imperious Perfect is another way to pump up all your Elves. The Perfect also taps to make even more Elves. With a few copies of it on the battlefield, you can quickly assemble a Giant Elf army. No matter how many Imperious Perfects you have, Elvish Archdruid or Priest of Titania will make enough mana to activate all of their abilities, with a bit left over as well.

Wilt-Leaf Liege is another Elf that makes all your Elves bigger, but it comes with an extra bonus. Copies of Wilt-Leaf Liege pump each other up by +2/+2 instead of +1/+1, since they are both white and green. That means that just three Wilt-Leaf Lieges are at least 8/8s, and with any more than that things start getting truly absurd.

Rhys the Redeemed is another way to make Elf tokens, and his tokens are also both green and white, so they get the full +2/+2 from Wilt-Leaf Liege as well. The real reason he makes the deck, however, is his second ability. While making copies of Elf Warrior tokens is fine, making copies of copies is much better. Activating this guy's second ability will copy every token you've made with Progenitor Mimic, giving you even more copies of your chosen creature. That will immediately jump your plan several steps forward, without having to wait around for your upkeep to come along.

Llanowar Elves and Arbor Elf round out the Elf section with some classic accelerators. These one-mana Elves will set you up to cast an Elvish Archdruid of Imperious Perfect on turn two, and give you more bodies to pump up with the various Elf lords. With the extra mana from Elvish Archdruid, casting one of these on turn one can prepare you to cast Progenitor Mimic as soon as turn three.

I mentioned earlier that Progenitor Mimic follows in the footsteps of a card from the original Ravnica. If you haven't already figured it out, that card is Followed Footsteps. Although as an Aura it makes you more vulnerable to removal, it does perform a similar function to Progenitor Mimic, and I would be remiss not to include it.

Lastly, I'll throw in a little protection for the combo. Unified Will seems like an effective counterspell here, since between the inexpensive Elves and various tokens, you should almost always have more creatures than your opponent. As long as that condition holds true, you get a genuine Counterspell that doesn't require you to have two blue mana in this green-heavy deck.

4 Priest of Titania 3 Unified Will

All Creatures Are My Creatures

The other track I went down when looking at Progenitor Mimic was creatures with enters-the-battlefield and upkeep triggers. Progenitor Mimic lets you really take advantage of these, since you get a new copy every turn. The first deck that came to mind was one I built myself several years ago using Followed Footsteps and Sporesower Thallid. Although the deck was a lot of fun, I wanted something with a bit more punch. Therefore, I turned to a different Sower. Not one of spores, but of temptation.

Making Progenitor Mimic a copy of Sower of Temptation lets you steal one of your opponent's creatures immediately, and another on every upkeep after that. If your opponent can't get rid of Progenitor Mimic, any creature he or she plays will get stolen, and without creatures to block with, your army of traitors will quickly finish the game.

Although Dungeon Geists won't steal your opponent's creatures, it will make them effectively useless. Once you've locked down every creature that doesn't belong to you, the 3/3 Geists can start attacking until you've knocked your opponent down to 0.

Giant Oyster is... well, it's essentially a much worse Dungeon Geists, which is a much worse Sower of Temptation, but this is what happens when you can only include four copies of a card. The one advantage the Oyster does have is that it will slowly kill off the creatures it's locking down. Once that happens, it's free to start eating a new creature. If your opponent is using several smaller creatures instead of a few large ones, Giant Oyster can thin the herd, so to speak.

There's one more neat trick you can pull with Progenitor Mimic. Well, there are a lot more, but there's one more I'm going to talk about today. If you read the card carefully, it has a qualifier in its ability. It only works if it isn't a token. Progenitor Mimic gives its ability to all the tokens it makes, the ability just doesn't do anything. So what happens if you copy one of those tokens (or the original Progenitor Mimic) with Clone or Phyrexian Metamorph? You get another Progenitor Mimic. That's another token every upkeep. If you're putting two Sower of Temptations onto the battlefield every turn, your opponent's hopes of winning pretty much fly out the window, short of a timely Supreme Verdict.

Rather than accelerating into Progenitor Mimic like the Elf deck, I decided to continue the controlling trend set by Dungeon Geists and friends. Unsummon is an easy way to stall for time, usually setting your opponent back a turn without costing you much at all. Mana Leak is a classically efficient counterspell that works well early in the game and can punish your opponent for casting multiple spells later.

Voidslime is another great control card for this deck. If you set aside the somewhat complex nature of rules text, Voidslime basically says, "Counter target thing." It doesn't really matter what that thing is, you can probably counter it. Genesis Wave? Countered. Progenitor Mimic's trigger? Countered. Imperious Perfect's activated ability? Countered. Unfortunately, mana abilities, like those of Elvish Archdruid and Priest of Titania, don't use the stack and therefore can't be targeted with Voidslime, but pretty much anything else is just ripe for sliming.

Attack of the Clones

The Progenitors are ready for battle, so let's take this to the arena and see which Simic Mimic comes out on top. Will the Elves grow large enough to steamroll their opponent or will they... be eaten by Oysters? It's time to put our two champions to the test.

The control deck paid 2 life for Breeding Pool, then cast a Clone to copy the Mimic. An Unsummon returned the original, and Dungeon Geists attacked for 3. Progenitelves cast the Mimic again, copying the Perfect, and attacked for 3 with a Llanowar Elves. Mimicontrol made an Imperious Perfect token and cast another Clone, copying it. Another Unsummon delayed the Elves' Mimic again, and Dungeon Geists and a Perfect swung in for 7. Progenitelves cast the Mimic once again, and Mimicontrol made two more Imperious Perfects. Dungeon Geists locked down a Llanowar Elves, and everything without summoning sickness attacked. Progenitelves was forced to block with the Progenitor Mimic and the remaining Llanowar Elves, dropping to 1 life. Mimicontrol finished the job on the next turn.

The Elves cast their own Progenitor Mimic and attacked for 6 with the Liege, getting through this time. Mimicontrol got a Wilt-Leaf Liege token and copied it with Phyrexian Metamorph, paying 2 life. Unsummon bounced the opposing Progenitor Mimic, and Mimicontrol's Liege copy attacked for 8. Progenitelves cast Elvish Archdruid, Rhys the Redeemed, and Priest of Titania, the last of which was countered with Mana Leak. Mimicontrol made two more Lieges, and attacked with three of the 12/12s. Progenitelves was forced to chump-block with everything, and died to the five 16/16s next turn.

Dragon's Maze is shaping up to be an awesome set, and I can't wait to see what else it has in store. Be sure to check back daily for the latest previews, and join me next week when I go deeper into the maze, with a little help from some friends. See ya!