ello and welcome back to the Lab. It's Thursday, so that's a given. Or is it? Technically, despite our past experiences of From the Lab showing up on Thursdays, the statement "All Thursdays contain a From the Lab column" is an induction, rather than a deduction (meaning it's theoretically possible that next Thursday won't have one). This is obviously the gateway to common philosophical conundrums, such as "How do I know the sun will rise tomorrow?"

A weird start to the column, maybe, but Magic has a fair layer of philosophy nestled in a kooshy spot of its infinity. I'm sure of it. Or I'm crazy. Speaking of crazy things, let's talk proliferate! ...Yes, again.

I love this mechanic. It's the perfect combination of balanced and bizarre, and it's a Johnny's delight. When I first beheld it, I instantly imagined a situation in which I proliferated somehow and toggled a ton of specific and different counter effects at once. There are so many little combos and deck strategies that it opens up from Magic's past. I discussed one, Rakdos Riteknife, a couple columns ago. As fun as pouring blood counters over your opponent is, there are tons of different counters out there to pour (over (opponents) (?))).

An easy answer is spore counters. You know, the Thallids of Time Spiral block (and Fallen Empires too!) I've actually already built that deck, but since I'm running with this miniature theme, I feel it's worth mentioning.

Let's begin with some hyphens! Yeah!

Hyphens freak me out. Don't ask me how that rule entered my psyche. It probably had something to do with seeing Eight-and-a-Half-Tails work its mojo for the first time. The legendary Fox Cleric is truly a divine master of the white magical arts, both re-coloring anything white and doling out protection from anything white. You're all dying to know the connection between this guy and proliferate, right? 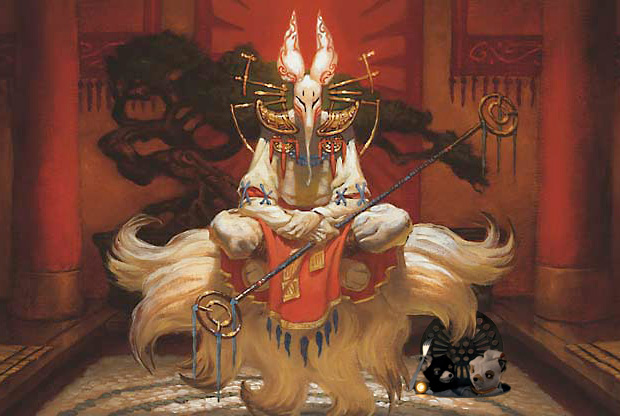 Enter Pious Kitsune. Yep, we're stacking up devotion counters. I find this hilarious. Use proliferate to zoom the devoting process, and with ol' 8.5 on the battlefield as well, a ton of life should come your way. My main proliferators are Contagion Clasp, Steady Progress, and Thrummingbird, who gets to be very useful here. 8.5 can make the winged proliferator virtually unblockable every turn. 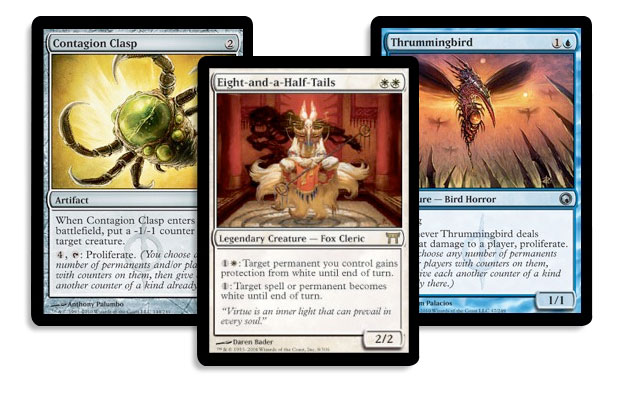 Next, I looked for cards that dovetailed my twin themes of counters and life gain. Ajani's Pridemate was a great starting point which naturally led me to Ajani himself (Ajani Goldmane version). Ajani the First's ultimate ability is really underrated in casual play as a finisher, in my opinion, so building up to that is a great goal. But using his second ability and following up with a proliferate sounds fine to me too.

Other "perfect fit" cards were Golden Urn and Sunspring Expedition. Aven Riftwatcher has always been a great casual card, and in this deck you can control its vanishing a bit more. Calciderm likes that quite a bit too. And speaking of cards that start with "Calci-," Calciform Pools is an instant add. Toss in a couple of Quest for Ancient Secrets and we're all set!

Am I referring to many players' bias against cumulative upkeep, or the unfortunate social trend that divides potentially compatible creative minds by age? Both, I suppose. Cumulative upkeep is an old, old mechanic that was used in the Ice Age era. It was also revived semi-recently in Coldsnap. This new spin on the mechanic turned the ever-growing amount of age counters into resources. Cards like Vexing Sphinx, Jötun Owl Keeper, and Phyrexian Etchings showed off these riffs. 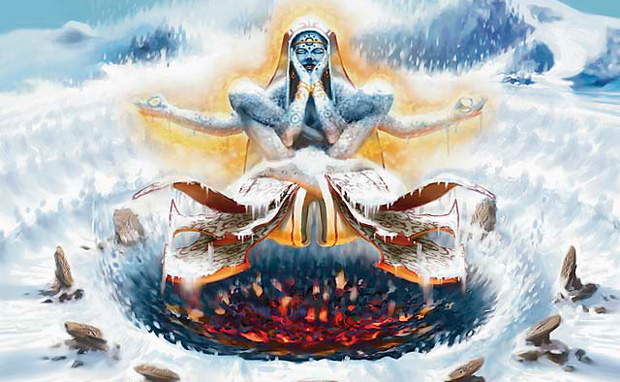 One of these cards is Braid of Fire. Now, I can't think of another card that has so rapidly flip-flopped in strategic value over the course of its existence. First it was a perfect "dangerously enticing" red card, offering pain and pleasure simultaneously. Of course, this was back during the days of mana burn, when you'd lose one life for each unspent mana that went poof at the end of a phase.

When mana burn was cut from the game, many players (including myself) foolishly cried, "And thus, Braid of Fire was broken!" What I and maybe others had failed to realize was just how difficult it is to take advantage of. So Braid of Fire was basically Luigi's Mansion: A bad killer app (of a rules change), but an underrated gem from an underrated set/console.

Now with proliferate in the mix, I'm happy to revisit the Braid. Imagine Braid of Fire with Contagion Clasp. Four mana is usually a hefty enough sum, but with Braid pumping out mana, you can easily Clasp every upkeep. Those age counters will start piling. Now, what to do with tons of red mana in my upkeep, but my upkeep only? How about a giant red instant, like Comet Storm? Oh boy. Another option is Blazing Shoal, making some evasive creature a giant attacker. Finally, I did some math and decided that Braid of Fire really likes fellow age counter cards, as it can pay for some cumulative upkeep costs all by itself. Like, say, Magmatic Core? Which can be proliferated? Fire is hottttt.

Question: What else does red have in the proliferate department? Answer: Weirdly, fuse counters! Most of this comes from Bomb Squad, a forgotten rare. Once you start proliferating fuses, the bombs will tick quicker (tee hee) for your opponent. Fuse counters are also around via Incendiary and the hilarious Goblin Bomb, which is a perfect kooky singleton.

Bomb Squad and Braid of Fire both have my upkeep in common. That's a short jump for me to add Paradox Haze, a card that generally makes me happy. I'm blue for Steady Progress anyway. Let's add some burn (since we're very red as well) in the form of wither cards like Puncture Bolt and Puncture Blast. With proliferate potential, these spells are better than normal. Finally, some levelers (Brimstone Mage and Kargan Dragonlord come to mind), a quest (Ior Ruin Expedition), and Gemstone Array (with Braid? Mmmmm!).

Devotion, age... wow, what metaphysical topic should I proliferate next? I don't know, how about divinity? I speak, of course, of the mighty Myojin of Kamigawa. These legendary gods carry a sense of being that renders them indestructible. And that same sense of being can be exposed to the material world and cause all sorts of chaos. 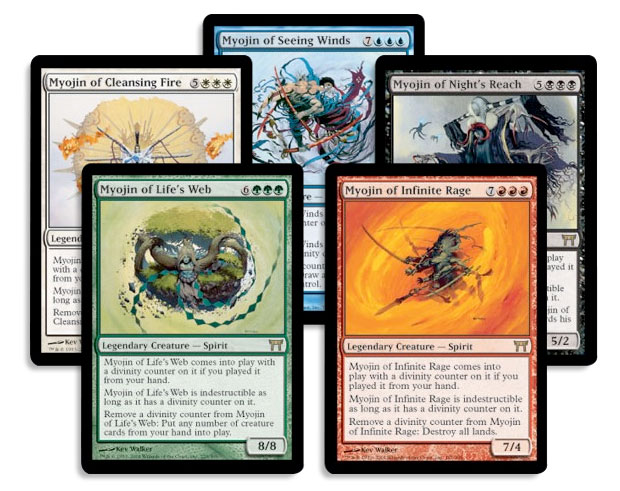 Trying to jack up divinity counters isn't, I confess, an entirely new strategy. That Which Was Taken straight up gave anything that sense of being. (Conceptually, I love it!) It's just that proliferate makes this a) a whole lot cheaper and b) a whole lot crazier.

Out of all five Myojin, which one would I hypothetically want to stockpile divinity counters on? Myojin of Infinite Rage is out, as usually one Armageddon is enough. Myojin of Cleansing Fire and Myojin of Night's Reach follow a similar road. Note that I'm not saying repeatable Boom // Bust, Wit's Ends, and Day of Judgment aren't awesome. They are. They just aren't as aesthetically interesting as...

Myojin of Life's Web! With proliferate power, you can "put any number of creatures from your hand onto the battlefield" multiple times. And yes, there is an infinite combo here. 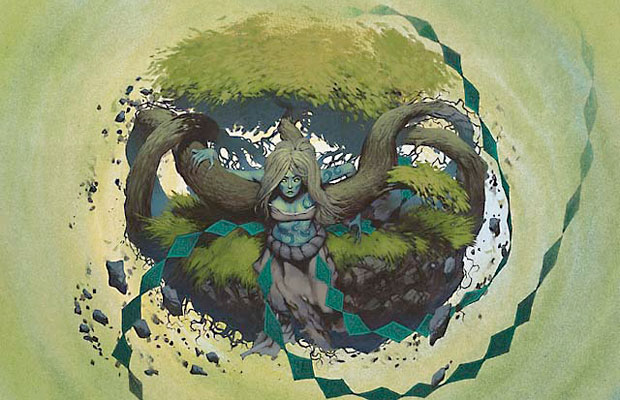 First, let's introduce our main proliferator. Making its From the Lab debut, say hello to Plaguemaw Beast, which can turn a creature into a proliferation once a turn. The early game of the deck involves a green Eldrazi spawn strategy that both ramps into Myojin of Life's Web and provides creatures to feed the Beast. Nest Invader and Kozilek's Predator qualify.

Once you hit Myojin mana, cast the legendary Spirit and immediately proliferate with the Beast, giving it another divinity counter. Next turn, if you have the right creatures in hand, you can go off. Weird Harvests are around in case you're missing a piece.

What are these pieces I speak of? One is any creature that can somehow untap Plaguemaw Beast. I'll go with Pestermite. Another is any creature that can create a token to continually feed to the Beast. I'll use Kozilek's Predator here, as it makes two tokens and will thus eventually bequeath infinite Eldrazi Spawn tokens. The last piece is something that can return itself, plus the Pestermite and the Predator to my hand. How about the wonky Dust Elemental? A 6/6 flier with flash and fear for four exists, folks, and its fantastic here.

So the combo is: Have two divinity counters on Myojin of Life's Web and a Plaguemaw Beast out. Weird Harvest for those three creatures, then pop 'em all out with one divinity counter. Sacrifice an Eldrazi Spawn token to the Beast, untap the Beast with Pestermite, and Dust them back to your hand. Repeat for infinite Eldrazi Spawn (which is a new great sentence in Magic that means "infinite creatures" and "infinite mana" at the same time!).

Any win condition will do, and since this deck likes creatures I'll go with Wildheart Invoker, Feral Hydra, and Broodwarden as quirky win conditions. The Invoker can turn infinite mana into infinite trample damage, while the Hydra can be a Blaze at times. Broodwarden is just a fun card that works well with my Eldrazi Spawn strategy anyway.


Myojin of Seeing Winds, meanwhile, is just nutty when applied with proliferate. Draw a card for each permanent you control? Potentially more than once? The prospect heightens the senses. 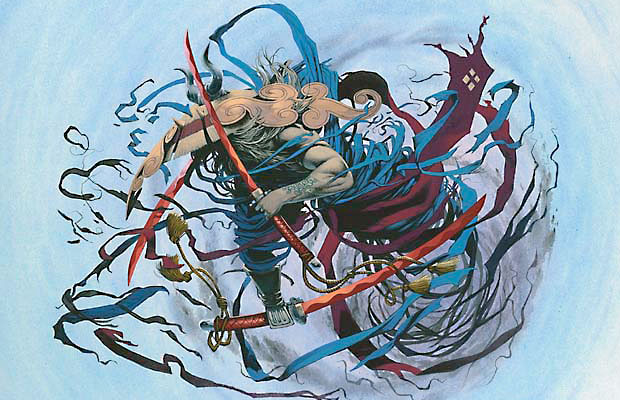 I liked Plaguemaw Beast in the above deck because it was a mana-free way to immediately get another divinity counter on my Myojin. I'll go with Throne of Geth and an all-star team of artifact fodder to perform the same function. Myr Sires, Myr Retriever, and Myr Servitor can be fed to the Throne, which can proliferate Ratchet Bombs and Titan Forges in the early game.

Late game, it's simple. Drop a Myojin of Seeing Winds and ramp up the divinity. Then unload them, draw a bunch of cards, and fry your opponent with a Spiraling Embers. Alternatively, Psychosis Crawler wins games in hyper-draw decks.


Well, that's it for this week. Until next time!

One last thing before we go. Way back in February, I asked you what Treasure Mage finds, if Trinket Mage finds "cogs." The results:

There you have it!