he tiptoed into his ward, which stank of sterilized air. The squashy dimness of the room was comforting; she was more than glad to get away from the blistering white sheen of the hospital's maze-like corridors. A patch of light bloomed from the window at the room's far side.

"Kendra?" wheezed a voice from the bed.

"I'm here, Gramps," she said. She moved toward the blanketed mass. Swallowed in its folds was her grandfather. His form was wiry and withered, and his face was gaunt. He was draped in medical tubes. 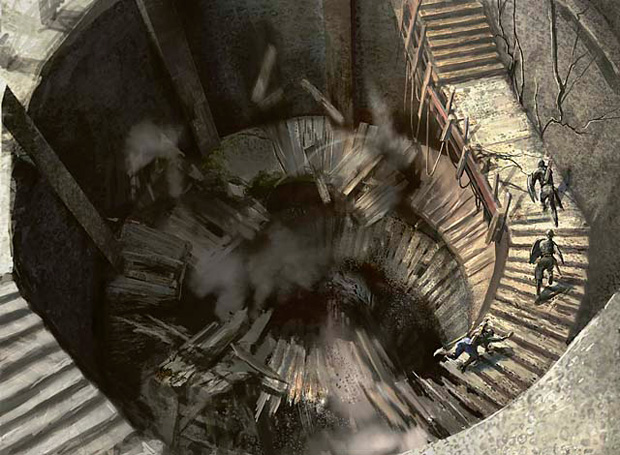 He coughed. "Neal," he said. "My name is Neal." His voice, dampened with age, still carried a hint of its past power.

Kendra blinked. "Neal, then," she said.

He looked at her. "We must speak plainly. I don't have much time left, and I need to tell you something. Something... about my past."

"What is it?" she said. Although a bit put off, she was a naturally curious person.

Neal eyed her pensively. "It could just be the echoes in my head. But I think I have to tell you. No one else but you will know this. You..." he trailed off.

Kendra sat at the foot of his bed. "Tell me, Neal," she said.

It began with despair. That's all I remember. Everything before that sense of mounting desolation snarls like white noise.

It was the discovery of my own ignorance that ignited my despair. I thought it something else at first, an elemental energy uncorked within me. But it felt rotten. 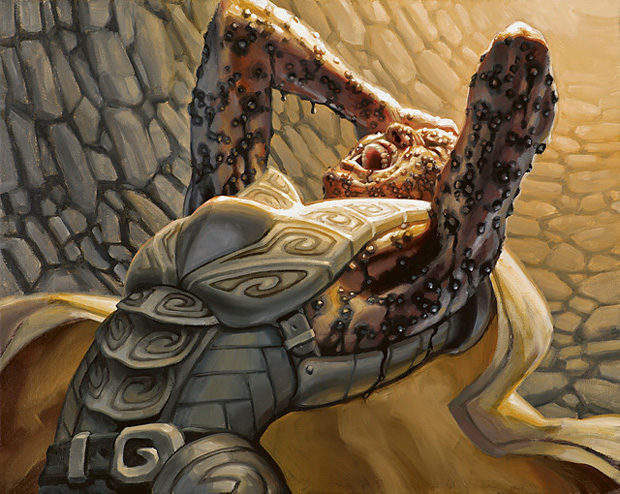 The edges of things began to thicken. A layer of darkness crept into my vision. At first, the despair was a minor passenger in my psyche, curled up like a lump in my throat. I would blink it away hurriedly, catch my shuddering breath in time to converse with someone.

Slowly, it unfurled, a twisted spike of sorrow. And the descent into madness began.

I began to see things in the shadows. Little impish creatures that pranced around in the dusk. I would watch them die, and a smile would fasten itself to my face, eerily like the grins of the urchins. Occasionally when someone passed by, I saw not them but through them, my gaze fixed on their bones. Their skeletons were wreathed in dark fogs, and their empty eye sockets would bore into my own—a chilling, somehow knowing, stare. 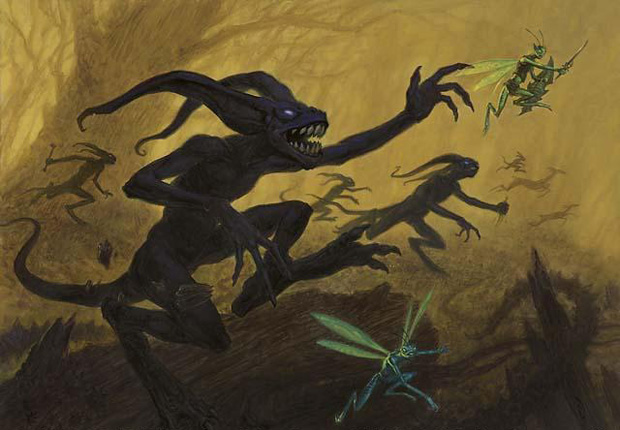 My wanderings led me astray from society. At the edge of a nearby swamp I found a slab of etched stone. I found solace in its hulking presence.

A bitter insight softened my already unraveling mind. I began to see the world as my opponent, in a game I had become trapped in.

I began to hum a toneless hymn as I traveled. The sound I emitted was guttural and grating, and those around me began to yelp shrilly. But I was growing numb to their pleas, for my anguish had left me irritable. The madness whittled my longing for information, and I began to probe, sometimes at the expense of others. For a tinge of cruelty now caressed my actions. Rats slithered in my wake, nipping at my opponents with odious fangs.

Were I sane, I would have comprehended the absurdity that I wielded, the acts of illustrative mulling I evoked. But swathed in my insanity, the abnormal became the normal. As my visits to the swamp increased, the stone's features sharpened into a sinister head and torso.

My goal became to share my disease, to infect others with my malignant erosion of mind. Certain artifacts aided me—one a trinket of two uses, and the other a slime-riddled book—which wailed with dark secrets. Eventually, my despair spilled over, and completely wiped out my opponent's resources.

"...or so I thought," finished the grandfather. He took a breath.

Kendra listened, chalk-white. She knew he had spent time in an institution. But hearing the intimate details of his madness was jarring. 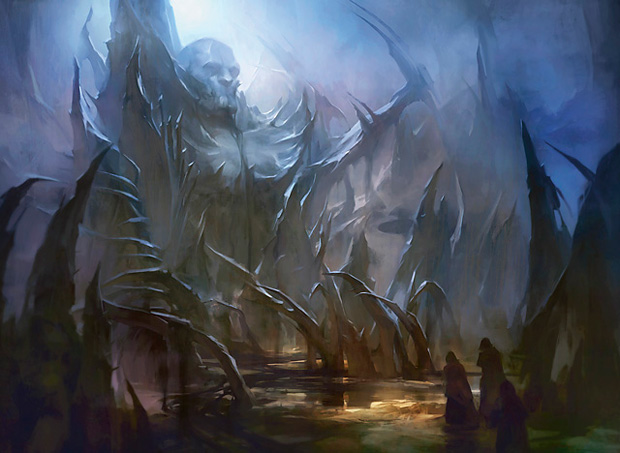 "It was all in my head, of course," he said. "That feeling of another world, layered over this one. It was so... crisp. But one day, the phantoms in my mind faded. The madness no longer had hold of me; it had exiled itself.

"My recovery began that day. I slowly reclaimed a place in society, working hard, making an honest living. Years went by."

Neal paused. He ran his hands under the sheets, squirming slightly. Kendra watched him with some apprehension. From his pockets he withdrew a tattered paper and handed it to her.

"I received this in the mail one day, long after," he said.

Kendra took the letter and read:

Primal Forcemage has so much cool interactions with AVR! I immediately thought of him when I saw Thatcher Revolt spoiled: Three mana for 12 power? Sign me up! Then I realized that Wolfir Silverheart accomplished almost exactly the same thing, so there was much rejoicing.

Not to mention the "all creatures have haste" effects of the Lightning Mauler 'n Lightning Greaves. They work brilliantly with the Forcemage, so why not with the Silverheart? This deck can make such explosive plays from nothing at all, provided your haste/pump engines aren't removed. Fortunately, the Greaves help out in the protection department as well.

Master of the Wild Hunt is another cool addendum. The token it makes every turn can be bonded with Lightning Mauler or Silverheart, and then swing with haste because of either the Mauler or some Greaves. Not to mention the Master can have the Silverheart fight creatures... and I doubt many will survive a one-on-one with an 8/8.

Archwing Dragon too is amazing, because Ball Lightning every turn is good, I heard. Especially when boosted by Silverhearts and Forcemages. Since drawing multiples is redundant, there's only one in.

Neal laughed grittily. "Erik K. An obvious alias. I never did track him down."

"Ah, but that's the funny thing," said Neal, bunching up onto his pillows. "On the surface, yes, its complete gibberish. I've showed it to many others, all with similar reactions to yours, my dear. But to me... it triggered something. Long dormant within me. Not the fully fledged madness again; that's long since vanquished. But something of a similar hue, shreds of that same fleeting... power." He sniffed, apparently frustrated. 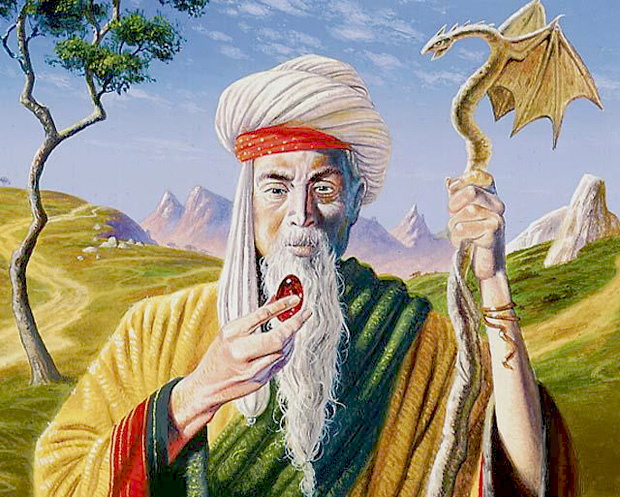 "Listen!" he barked suddenly. She didn't recoil, but glared at him, her stare icy at once.

"I'm sorry," he said. "But this is what I'm trying to tell you. This letter makes sense to me. Its tone, its references, the almost alien language. It drummed up those feelings of universal exposure, a sort of quasi-revelation. It's like a remnant of my psychosis finally returned to me."

He rapped his knees with his hands, now quite animated. "There's more to the world, Kendra. There's a force at work, and I think it's possible to tap into it."

She stood up from the bed.

Neal looked up at her. "Ah. I didn't mean to frighten you!" he said.

"Well, you did," said Kendra. She realized she was still holding the crinkled letter. She let it fall from her hand and it spun to the tiled floor. He gestured feebly, about to speak again, but she cut him off, fresh with revulsion. "You did!"

"Kendra..." he pleaded from the bed. His eyes were a soupy mix of rain and fire. She backpedaled.

"You're not well, Gramps," she said, hating the strain that crept into her voice. She turned her back. "I'm... I'm leaving."

The door to his room swung behind her in a whoosh, masking the sound inside. She felt her mind stirring. She concentrated on leaving the building.

She drove to the park on the edge of town. It was a large, wooded area. Loose grass was swept up by the wind, floating into the denser trees. She parked and stepped out onto the trail. Other humans filtered in and out. A group of park rangers stood together, consulting a map. As she bounded along the path toward the woods, she saw a guide walk toward her. He gave her a hearty smile. 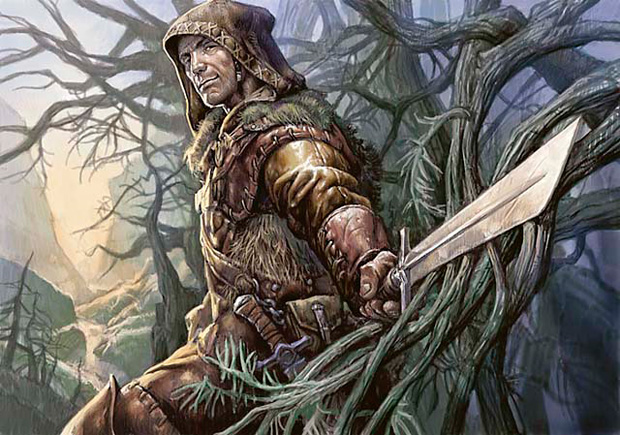 "The far side of the park's particularly unusual today," he said as they brushed past.

She grinned unconsciously. The air seemed brighter, and as she stepped into the thicket, the trees seemed to shimmer. The forest had always consoled her in the past. As she walked further, her mind began to settle and clear.

Up ahead, the dusty path petered out, fading into the heavier woods. As she approached, she heard a rustling on her right. She looked and saw two people sitting in a tree. They wore green robes and were intently studying the wood. As she passed, one of them met her gaze and watched her solemnly. She continued onwards, feeling a sort of muted giddiness.

She felt swayed by the forest now, by its natural allure. As though someone were calling her.

The trees ahead parted to reveal a giant field. Acres of loping plains smothered the horizon. An altar of some sort was perched on the fringe of the turf. Dumbfounded, she wandered in. As she did, she felt a beam of sunlight envelop her, and the wind sieved through the heath. She looked up; dizzy but somehow aware, completely, of some grain of abstract truth. Angels burst into view overhead. 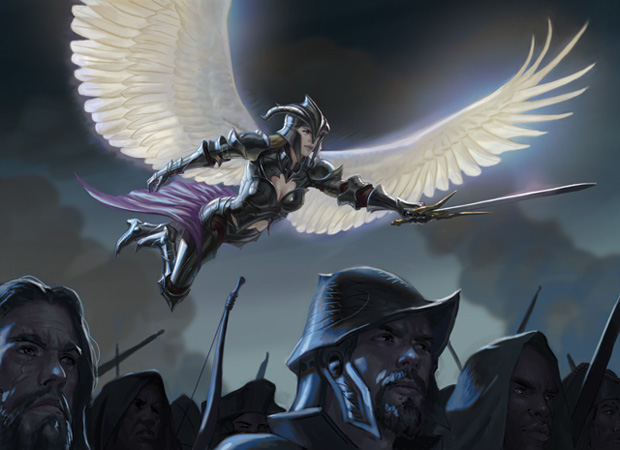 One was covered in chainmail and flew with pearly wings, bearing an intensely savage expression—a true herald of war. The other was stoic and seemed made of platinum. They soared across the sky. Scarcely able to comprehend, Kendra felt her spirit thicken with resolve. Her dark hair streamed behind her.

She felt the rush of footsteps patter around her. She whirled around. Scads of soldiers had erupted from thin air, and were running after the two angels. She heard their breath and the clank of their armor. Another surge of vigor flowed through her. She again looked up on instinct. An angular skiff was gliding in the angels' wake, captained by riders. The aircraft banked to and fro, its motions infinitely zippy.


In that moment, Kendra felt strong, felt confident, felt her internal tide of uncertainty recede. She would lead the soldiers into battle, a champion on the verge of a new reality. Her grandfather had indeed stumbled onto a secret. There was a spark of magic in the world.