elcome to the Lab, folks! The Magic 2014 Prerelease is quickly approaching, and today I'll be looking at one of my favorite cards from the set: Strionic Resonator. This card does something that's never been done before in the history of Magic, and that's not an easy feat to accomplish these days. Unique cards always catch my eye, and this one has the additional advantage of being designed for the Johnniest of Johnnies. It brings to mind an old favorite of mine: Paradox Haze. Like Paradox Haze, Strionic Resonator can give you an extra copy of abilities that trigger at the beginning of your upkeep. That's not all it can do, of course, but it's a good starting point.

The first thing that came to mind when looking for ways to take advantage of this card was triggers that grow larger with each iteration. Mirror-Sigil Sergeant is a classic way to abuse Paradox Haze, but since each creature has its own individual trigger, it doesn't work quite as well with Strionic Resonator. Assemble the Legion, on the other hand, only has one trigger, and with Strionic Resonator copying that trigger every turn, things can get out of hand very quickly. 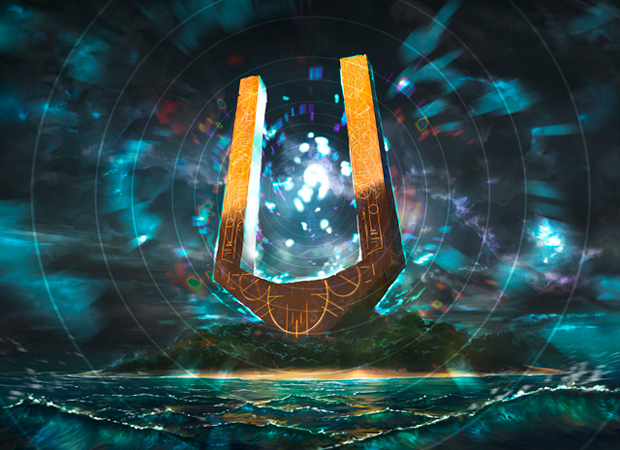 The first time you copy Assemble the Legion's trigger, you'll get a total of three tokens. One from the first trigger and two from the second. On the following turn, you'll get three and then four, for a total of seven. Eleven tokens will hit the battlefield the turn after, and if your opponent isn't dead by the time you hit fifteen tokens, you might have a problem. Paradox Haze does essentially the same thing, so I'll include that as well. With both, you'll be getting fifteen tokens just two turns after you cast Assemble the Legion.

If 1/1 Soldiers aren't big enough for you, Márton Stromgald can fix that. When he attacks, he gives all your creatures +1/+1 for each other attacking creature. Attacking with five tokens and Márton Stromgald gives you five 6/6s. You can even copy Márton's ability with Strionic Resonator to get another +5/+5.

This being From the Lab, I had to find some way of going infinite with Strionic Resonator. This proved more difficult than I had anticipated. Strionic Resonator requires you to tap it in addition to using two mana, so I needed a trigger that provided that two mana as well as a way to untap the Resonator. The card I settled on in the end was Aurelia, the Warleader. Although it may look like she doesn't do either of those things, all it takes is a little tinkering and she'll give you what you need.

First, you'll need to untap the Strionic Resonator. Aurelia untaps all creatures, so you just need to turn Strionic Resonator into a creature. Toymaker can take care of that for just one mana and doesn't require any additional colors. You'll also need two mana each time you untap your creatures. Palladium Myr will do exactly that, and two of any combination of Iron Myr and Gold Myr can fill in if need be.

Once you have the pieces assembled, here's how it works: Attack with Aurelia, the Warleader and put her trigger on the stack. Copy it with Strionic Resonator, and after making the Resonator a creature with Toymaker, let the copy resolve. All your creatures will untap, and you'll get an extra combat phase. Tap the Myr to make two mana, and activate Strionic Resonator again, making another copy of the original trigger. Repeat this a few million times, then finally let the original trigger resolve. You now have a few million additional combat phases, and since Aurelia has vigilance, she can attack in every one of them.

Unfortunately, a 3/4 with flying won't always be able to get through. In that case, Goblin Fireslinger can tap to deal 1 damage to your opponent over and over again until death. Enlightened Tutor makes another appearance here, searching for Strionic Resonator, Toymaker, or Palladium Myr. Rebuff the Wicked helps protect the fragile creatures you rely on for your combo, and Oblivion Ring can get rid of anything that stands in your way.

There can only be one king of the Resonator, and the time has come to take it to the arena. Will Aurelia triumph over her own legion, or will Márton's Mutineers prove victorious?

The Legion made two more tokens and cast Paradox Haze. Aurelia passed the turn, and Assemble the Legion made seven more tokens. All ten attacked and Palladium Myr killed one. Aurelia dropped to 9. Aurelia found only land during the draw step, and died to 20 attacking Soldier tokens on the following turn.

I hope you've marked your calendar for the Magic 2014 Prerelease, because if Strionic Resonator is any indication, this set it going to be a blast. I'll be there, slicing through swaths of slimy Slivers with whatever awesome deck I manage to assemble. And make sure to visit me here at the Lab next Monday, when I'll have another dose of delightful combo decks for you. See ya!