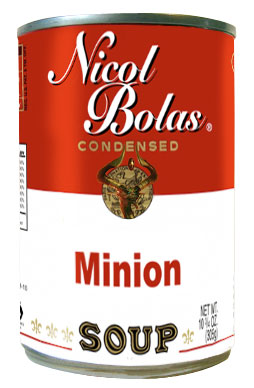 ormally, the first sentence of my column is where I warmly and enthusiastically welcome those who are reading with a giant, "Hi!" or "Hello there!" or "No soup for you! Next!" (Oh wait, that's how I welcome telemarketers, not my readers.) Anyways, the reason I'm being a little hush-hush on the welcoming front today is because if I raise my voice to its normal volume level, I'll probably disturb him.

Assuredly, you guys also know him. Nicol Bolas: Among the last of the old era of planeswalkers, who also happens to have centuries of experience crammed into his astute mind. The one with nearly unlimited amounts of power at his disposal, the one with the oldest and yet coolest library ever, and the very individual who plotted the merging of the five shards of Alara. And his fashion sense? Don't get me started. Nicol Bolas will do for the undone tie what Anton Chigurh did for the bowl cut.

Now that I've somewhat accurately described him, hopefully you'll understand why I'm slightly terrified of the planeswalker. You see, in honor of Nicol Bolas Week (which we're right in the middle of, by the way) each magicthegathering.com columnist got a chance to meet Nicol Bolas himself, as a preparatory measure for the theme week. The kicker was that I didn't know when he would show up, so all week I was fretting about the fact that any moment a screamingly diabolical dragon could come crashing through my wall. Finally, last Friday, I had seemingly calmed down enough to get out from under my bed and get some food. Maybe even watch some TV.

I turned the corner, thinking about eating that last slice of cheesecake in my fridge, and there he was. Nicol Bolas. Standing on my crushed television. 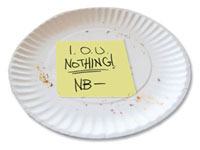 I mustered a soft, "Hi there."

Bolas laughed tyrannically, a sound I won't forget anytime soon. "Make this week good, or ...." he growled, vaporizing my couch to make his point. With that, he raised his wings and flew away, taking care to create a second gaping hole in my ceiling.

Just when I thought it was over, he stuck his monstrous head back through the hole and said, "I ate your cheesecake." 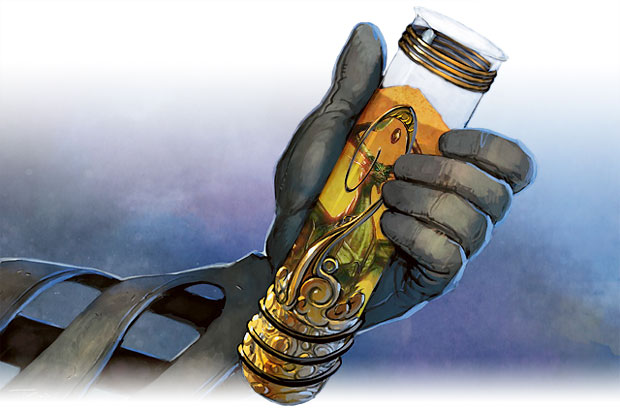 Talk about having to perform under pressure! Since I would prefer to avoid vaporization, I better quit this fancy introduction and make haste with the wacky deck building. Let's begin by looking at an Aura from Conflux that's obviously influenced by Nicol Bolas. See, I can get behind Auras like Elder Mastery, which instantly transforms its bearer into a miniature version of Nicol Bolas. There are similar transformative Auras that I'm quite taken with, such as Epic Proportions (instant beatstick!) or Pemmin's Aura (instant Morphling!) that I've enjoyed using in the past.

With regards to Elder Mastery, it's a certainly swingy enchantment that doesn't have a ton of Johnny qualities. However, one of the best targets you could think of for Elder Mastery was printed alongside it in Conflux: Nyxathid. This rugged Elemental warmed my heart from the moment I saw it in the spoiler, probably because of the mix of a black creature (literally, in the art) and the very red flavor text. It also reminded me of Dread Slag, which itself was black and red, so I was basically destined to like this card. Nyxathid is a great Elder Mastery target for three reasons. First, flying on a quick fat creature is essential. Second, the +3/+3 should offset Nyxathid's power restriction. Third, and most important, giving Nyxathid a "Specter" ability both screws up your opponent and makes the 'Thid even bigger.

From here, I began adding creatures that fit into a discard strategy. Sedraxis Specter was a no-brainer. Cunning Lethemancer works as well, and since we're in Grixis, the shard of unearth, you should be happy to discard your Shambling Remains during your upkeep. Kederekt Leviathan is another graveyard hopper that can bounce your opponent's creatures, which will soon get discarded.

During testing, Elder Mastery's large mana cost became an issue. I was usually beating down for the win without my supposed build-around-me card, so something had to change. I added Academy Researchers for the prospect of a turn-three 5/5 "Specter" on steroids. Since Helm of the Ghastlord fit reasonably well with the deck's themes, I added the Shadowmoor Aura.

To round off the deck, I added a couple of quirky creatures that force discard of a sort. Needle Specter becomes a one-creature wrecking ball when suited up with Elder Mastery, as taking damage from it will probably rip your entire hand away. To top it off, it has wither! Ghastlord of Fugue, meanwhile, obviously loves its own Helm, but it doubles as a secondary win condition in case something should go wrong.

4 Elder Mastery 4 Helm of the Ghastlord


I wanted to run full sets of my Auras to ensure I'd snag one with the Academy Researchers, but I also didn't want them clogging up my hand. Running four Cunning Lethemancers allowed me to ditch excess copies of Helm of the Ghastlord when they weren't needed. Another version of this deck could include Rotting Rats as both an unearth-y target and a discard-based creature. And obviously, Cunning Lethemancer fits right at home in a classic reanimator deck, so slanting the deck toward that could be another option. Traversing on that path would probably mean cutting most of the Elder Masterys, and since I can already hear Bolas's rumbling crescendo at such heresy, I'm going to abruptly change the deck topic. There's enough here to work with, I'd say.

An interesting paradox occurred with the release of Conflux that has been a noticeable trend in sets over the recent years: their moniker is shared with an actual Magic card. Whereas the early cases of this could simply be chalked up to happy accidents (Apocalypse, Onslaught, and Torment) the trend has escalated with Morningtide and most notably, the whole of Time Spiral Block (Time Spiral, Planar Chaos, and Future Sight). Conflux, however, has one-upped all of these efforts by placing the offending card in its namesake set. As Mark Rosewater mentioned at one point, this may become a Magic trivia question for the ages.

Conflux (the card) similarly asks a lot of questions, such as, "How the heck are you going to acquire

to play me?" or "What five cards are you going to fetch, anyway?" Seeing that it is Nicol Bolas Week, it seems fitting to at least find Nicol Bolas, Planeswalker with the Bolas-flavored sorcery. But in terms of Johnny-tastic creations, there's got to be something more ridiculous to pair with it.

An insanely long time ago, I was approached by none other than multiplayer enthusiast and editor extraordinaire Kelly Digges with a kooky deck idea based on Conflux. Strangely enough, it wasn't the quintuple tutoring that appealed to Kelly for the following deck skeleton, but the exotic mana cost. To quote, "First off, let me direct your attention to a blog post from Worlds 2007, where some misguided players tried to do a very silly thing in Legacy." (Hint: Click the link.)

For those too lazy to click on the link, I'll briefly describe the aim of the deck, which was nearly taken to the Legacy portion 2007 World Championships. The deck didn't have a single way to produce mana. Instead, its "mana base" was composed of giant multicolored spells that were there solely to be fodder for various "pitch" spells, such as Force of Will or Cave-In. The deck played full sets of Coalition Victory and Karona, False God, as well as Garza Zol, Plague Queen and (fittingly enough) Nicol Bolas to ensure the color scheme was well balanced. The deck's win condition was a strike from a Vine Dryad pumped by a free Blazing Shoal (this is why the spells had to be so big.)

As Kelly noted, "...as of Conflux, the 'mana' options for a deck of this sort have improved dramatically. There are five

cards with converted mana costs of 6 or greater, and another set of 8s in every three color combination thanks to Sphinx Sovereign and pals." As well as Conflux (the card), both Progenitus and Reaper King become appealing options, with either of the latter two being a direct upgrade over Dragon Tyrant in the linked deck list due to color flexibility.

To keep things fun, Kelly suggested other, less Spikey pitch spells from Magic's history, such as Shining Shoal. As Kelly wrote, "... if your opponent is dealing damage to you in big chunks, two Shining Shoal + two Progenitus / Reaper King could win the game."

Here's a revamped list I cooked up based on both Kelly's suggestions and the pioneering deck.


To un-Spike the deck, I removed the mean blue freebies such as Force of Will and Misdirection, but kept the red ones (Pyrokinesis, Cave-In). Eight more Shoals entered the deck to make up for the lack of disruption, and as stated above, Shining Shoal is possibly your win condition. Because of this, I bent the balance between the colors a bit to focus on white. Autochthon Wurm + Shining Shoal was one of Kelly's fun suggestions, and Sunscour can wipe the board if necessary.

I loved Kelly's idea, and upon reading the email a certain card, once hailed as the most feared combo enabler ever, popped up in the halls of my dreams. I didn't want to ruin the DREAM of a manaless deck, so I said to myself, "I sHALL create a Second deck, one around the beastly combo that is Conflux + Dream Halls."

From here, I decided to go with the storm mechanic as my win condition. Since Dream Halls benefits a storm strategy without Conflux in the first place, I figured it was a decent choice. In the above scenario, you've already cast five spells (the initial Dream Halls followed by the four Confluxes), so the first Brain Freeze will rip eighteen cards from the top. The second and third will clear out the rest of your opponent's library.

And thanks to Dream Halls, we can cast these Brain Freezes for free! But wait: don't we need blue cards to do that? And can't Conflux only find one blue card? Thanks to the magic of hybrid and gold, each time you cast Conflux, you can look for a Brain Freeze, another Conflux, and three multicolored spells of your choice that fit the color requirements. If you tutor correctly, you'll have four other blue cards in your hand to cast your Brain Freezes.


The toughest part about the deck is finding both Conflux and Dream Halls, but once you do, the combo instantly falls into place. Between Esper Charm, Transguild Courier, Wistful Selkie, and Electrolyze, you should have no problems casting Brain Freeze.

Next week, I'll be previewing a card from Alara Reborn! Also, I'll get to the results of the April Fool's Day challenge, so I'll see you then!