Up on the Rooftop

ith the grinding of gears and tightly bound machinery, the laboratory platform begins to descend. Steam billows from respective pipes and lights from various computerized devices flash. As the platform sinks into the room, the light of the moon can be seen through a thick veil of rain and lightning. But for the roaring thunder and howling wind, the only sound comes from the open mouth of the mad scientist. Peals of laughter, tinged with the slightest madness, corkscrewing through the air. At last he quenches his own mirth to speak, to let the words themselves define his actions. 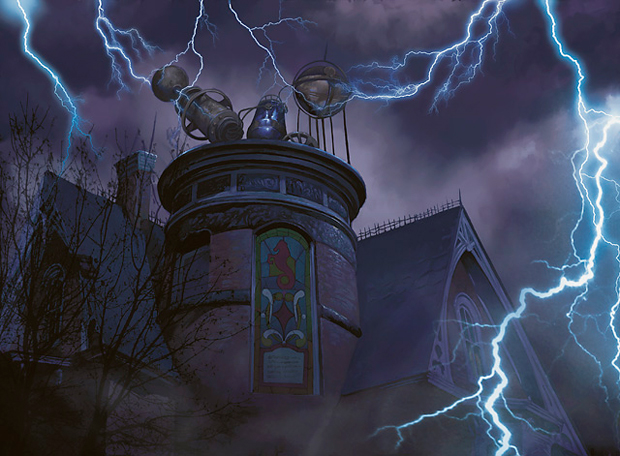 And on the heels of that triumphant bellow, scrabbling from the rooftop. The faint shuffling of dead flesh, so recently without the spark of electric animation, and a dim chorus of moans. The lab madman begins laughing again, not a boisterous crescendo of amusement as before, but eerie giggling and squeaky self-punishment.

Out on the slicked rooftop, an unholy sight welcomes any daring opponent. A writhing mass of zombies. All seemingly having appeared out of nowhere. Creatures that once cost reasonable amounts of black and blue mana now materialize for a lot less. 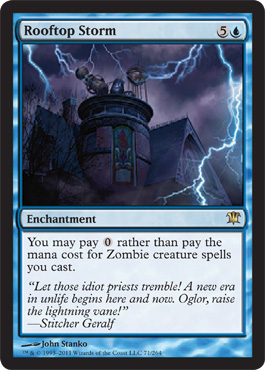 That's one torrent of souls. Undead ones. With a full hand (we are in blue, right?) of Zombies (now both black and blue; bruised zombies), your opponent might not be able to weather the Rooftop Storm in time.

According to the minds behind Innistrad, mad scientists have been callously messing with the bonds of life and death throughout the history of horror. Rather than count the times the word "tropes" has singlehandedly explained this block design, I'll just straight-up buy into their vision. As something of a mad scientist myself, I fully support my ilk being shown the spotlight for once.

Flavor-driven design is something I constantly crave from Magic, and Innistrad is providing this in waves. Rooftop Storm obviously seeks to awaken the Dr. Frankenstein in all of us. Excuse me, I meant Frahnkensteen. (Go go Gene Wilder reference!)

So, let's see what fun can be had with Rooftop Storm. Having all my Zombies cost zero makes me wonder what the best undead deal could be. Imagine casting Rooftop Storm and then basically dropping your hand onto the battlefield. A hand laden with expensive Zombies. 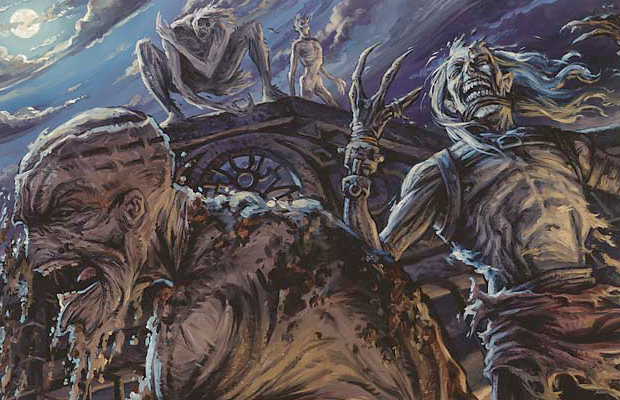 Thraximundar is one of the more notable costly Zombies. Having that monster pop onto the table for free is a fearsome scenario. A free Phage the Untouchable (now a Zombie!) sounds nightmarish as well. Other bold and beefy Zombies which are amazing for no mana include Geth, Lord of the Vault (which funnily enough, just destroyed me in a real-life game), Twisted Abomination (great for early swampcycling), and Sedris, the Traitor King. Although Sedris's unearthing powers aren't heightened by the Rooftop Storm, he's still a fun Zombie that I like to play with. 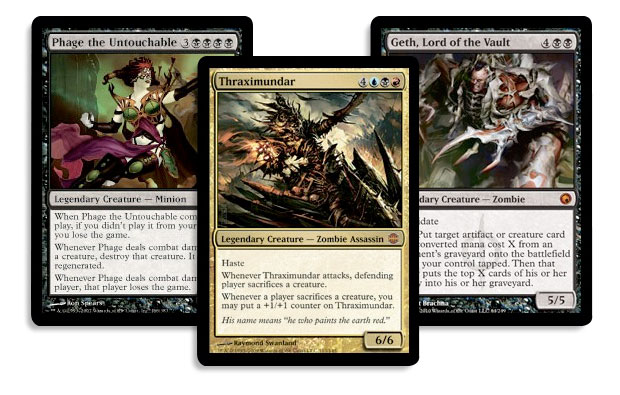 Playing lots of Zombies at once can lead to many cool "enters the battlefield" abilities. Noxious Ghoul, for one, becomes extra zesty now that all Zombies cost zero to cast. With enough Zombies in your hand, it could very well wipe the rest of the board. Corpse Connoisseur becomes a quick tutoring creature. Although the found Zombie goes directly to the graveyard, there are surely ways to get it back. (Gravedigger is the cleanest and most sturdy version for my purposes, although there are wackier Zombie methods (Woebearer, Lord of the Undead, Aphetto Vulture.)) Skinrender is a fine form of Zombie removal. Sedraxis Alchemist is a similar Zombie that can bounce troublesome permanents (and ideally you have a blue permanent... think about it...). Grave Defiler excites me quite a bit, being a Zombie that can potentially reload my hand with other Zombies.

While we're on that subject, let's get all nitty gritty on card draw. I'd ideally like to have lots of Zombies in hand most of the time, so I can just dump them onto the board via Rooftop Storm. I love it when I rediscover a perfect card from the past for a certain situation, and Graveborn Muse gave me a fuzzy feeling. Sure, there's the life loss, but hopefully your free Zombie beats can outrace your opponent. Being in blue in the first place gives me access to a universe of card draw.

Another aspect of Rooftop Storm: What to do with all that scrumptious mana lying around? Now that all my Zombies are free, it would be nice to have a mana sink lying around. Preferably in the rotten form of a Zombie. Withered Wretch is a decent first try (going berserk on your opponent's graveyard), but I think this the situation Lich Lord of Unx dreamt of as a young Zombie child. It's a blue and black Zombie that spawns other blue and black zombies, and you can pour blue and black mana into its latter ability. Ideally you have tons of the undead, so the mind and body blasts from the Lich Lord should weigh, um, tons. Other cool Zombie mana sinks include Boneknitter (to keep all your Zombies kicking around) and Plaguebearer (a veritable removal machine—just add mana!).

Here are a couple Zombie decks with lots of the above cards mashed into them, creating twin masses of electrical zombie pulp. Other fine members of the undead that didn't fit into the above categories made the decks, whether they're in a constant straightforward bashing mode (Undead Warchief), like to leech life from everyone (Shepherd of Rot), or create quasi-infinite combos. Hey, this is From the Lab after all. Oh, the combo? With a Nantuko Husk out (a Zombie Insect!) and the Rooftop Storm roaring overhead, use two Gravediggers to infinitely pump up the Husk. Since they cost zero, you can shuttle them back and forth through infinite sacrifice.

Day of days! My training is complete, and now I am on the trail of that most unholy of abominations — Vampire. The one I hunt is clever, there is no doubt. But I have faith on my side! Faith in Avacyn, faith in my training, and above all, faith in the truth that the blessed sleep is nothing compared to living a life with you. 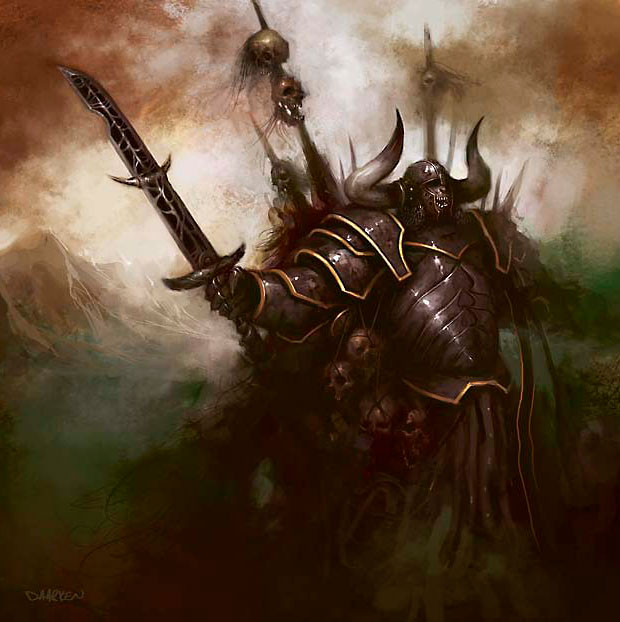 This deck is mostly about slamming your hand onto the table with Rooftop Storm (okay, they both are, but there are subtle differences). The big fat Zombies can be found in this list. Vesper Ghoul is a quite unknown Zombified mana accelerator, and Korlash, Heir to Blackblade is a popular legendary Zombie that achieves the same purpose. Gravedigger can get your Korlashes back on the cheap for extra grandeur. Other than that it's a smorgasbord of Zombie beats. Blue Sun's Zenith joins the card draw team as a recycling Mind Spring, which is always something nice to have.


This deck features the double Gravedigger plus Nantuko Husk combo, which can really catch your opponent unawares. This deck also features Noxious Ghoul, which the other list couldn't really find room for. Most importantly, this deck features... something I haven't yet mentioned! Cloudstone Curio, a pretty classic artifact. That nonartifact clause is there to specifically prevent Ornithopter and Memnite shenanigans... but now that Rooftop Storm is here, we can break the hell out of Zombies with enters the battlefield abilities!! Just keep bouncing your own free Zombies back to your hand and recasting them.

What fun is to be had here? The aforementioned Noxious Ghoul can turn any Cloudstone mischief into a complete wrecking ball for any non Zombie opponent. Grave Defiler can keep looking for your key Zombies. Sedraxis Alchemist can bounce every nonland permanent your opponent controls. And the little-known Portal card Dakmor Ghoul can come through for victory, with little 2-life bites coming over and over. It's like being eaten really slowly. Zombies seem to be either slow, methodical eaters (examples: Brain Gorgers, me) or ravenously fast eaters (examples: Captain Rhodes's death in Day of the Dead, surely one of the most visually effective zombie kills ever.)

Either way, Rooftop Storm cranks up one of Magic's oldest tribes from shamble-speed to running-speed (in a good way, for the first time ever—okay, not ever; I quite enjoy Zombieland). With all the new Zombies to play around with, Rooftop Storms should be swirling over many a battlefield!

See you next week, when I preview myself!

Oh, and to quickly diverge from the glorious path of Innistrad previews: my Pick a Word deckbuilding contest ends tonight, so today's the last day to submit your entry. I've received some fine ones thus far, and I'm excited to show off the results! Here's the link to the rules if you have no idea what I'm talking about.