ello and welcome back to the Lab. After a hazy period of time during which I can barely recall anything that transpired (besides a swirl of lights and music) I'm back to a traditional card coverage column. Just in time, too, as the goodness of Magic 2013 seems to be gushing out of the website. Previews of all shapes and sizes are coming out of the woodwork. Krenko, Mob Boss is an exciting Goblin card that signals the return of legendary creatures to the core set for the first time since Tenth Edition. Yeva, Nature's Herald and Talrand, Sky Summoner are both quite exciting as well (leaving me antsy for the white and black legends). Each core set features a mechanic from Magic's past, and this year exalted got the nod, as shown through the exuberant Sublime Archangel. Wow, that's a powerhouse. 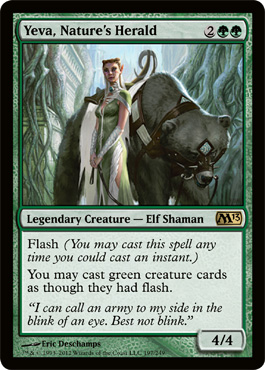 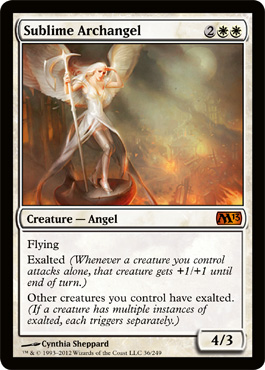 These thoughts led me to my own preview for today. Now, this preview week is a bit different from others, due to the synchronization of Magic 2013 and Duels of the Planeswalkers 2013. Therefore, the preview cards this w:eek show up in both products. Huh, that's a weird caveat. Okay, back to the issue at hand: My preview card. Alrighty then, I'll start rambling, that should work.

Although the core sets are rightly geared toward incoming players, they remain fascinating to me, even though my perspective is, as a long-time player, perched directly within the shade of Magic's influence. Now that new cards are designed for the core set, it's fun to be a spectator and ruminate over the decisions made during the set's construction.

Many of Magic's angles are touched upon in the core set. Creature combat and dazzling instants and sorceries are presented with a flourish. But how about the less flashy but still important aspects of the game? Like, say, milling? My preview card will almost certainly pop out of booster packs and blow the minds of Magical novices. . 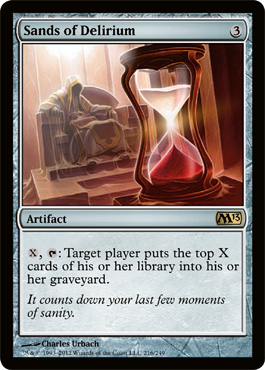 Well, that hits hard. Sands of Delirium is an extraordinarily powerful mill card. Ranked up against its kin, it quickly moves past previous millers and settles into a top option slot. It mills twice as fast as the morph-y Whetwheel, for example. Probably the most apt comparison is Millstone, a card that was in the core set for years and was the edgy and defining card for mill strategies (the slang phrase "milling" dates back to the use of this card). Sands of Delirium might pack a heftier punch than Millstone, but it requires a similarly hefty mana requirement. That delightful X symbol opens the door to mana-intensive decks, and further back into that room (crammed into a shoddy restroom or something) is another door to Infinite Mana Land. Sands of Delirium essentially can eat chunks of your opponent's library or wait for an explosion of mana to drink (driving your opponent to lethal insanity levels in the process). 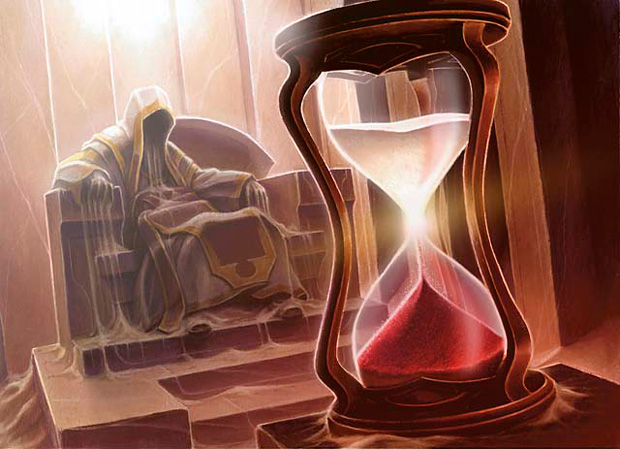 So let's look at some decks that feature Sands of Delirium as a method of straining your opponent's mind through a filtration point of no return. The first deck doesn't flirt with infinity, instead using a predominantly artifact base to generate mana and defense. Everflowing Chalice is a critical piece of artifact acceleration. Blinkmoth Urn can pump out loads of mana if you have loads of artifacts, which can lead to loads of milling. Unwinding Clock allows you to sponge all your resources into a giant Sands activation on your turn... and then promptly do it again on your opponent's turn.

Of course, if I plan on winning through milling, I'll need some tools to survive. Scepter of Dominance can lock down any solo problems. Silent Arbiter throws a blanket over combat, and its 1/5 stats can take on a range of attackers. Unless your opponent has creatures with exceptionally large footprints. In which case you can turn to Altar of Shadows. Expensive, yes, but with a mana-intensive deck, it can keep eliminating threats and slowly build up its own mana. And as a fitting cleanser in case things look dire, a Scourglass can wipe away anything troublesome while keeping your artifacts intact.

To increase my card flow, I used Howling Mine. It'll augment your draw step and shred a sliver of your opponent's library simultaneously. Enlightened Tutor can find any artifact in your deck, including the singleton Dispeller's Capsule. Buried Ruin can regurgitate your artifacts (especially Scourglass), and for fun I threw in a Gargoyle Castle.

4 Sands of Delirium 3 Scepter of Dominance


That deck is one of those freefalling humdingers. Either you stabilize and mill out, or your defensive methods don't show up in time. Both scenarios seem viable, but I wanted to make sure that Sands of Delirium got its Lab treatment. With that in mind, I'm going infinite with this last deck. The goal is to create infinite mana, drop the Sands, get it to stick, and mill out your opponent on the spot.

There are many paths to infinite mana, but usually I'm starting the process with one of them, not the win condition. So I could take any route. I'm going to keep with the artifact theme and use the ultra-broken Metalworker. With enough artifacts in your hand, this mischievous robot can tap for oodles of colorless mana. Throw in a way to untap it (preferably an artifact) and we're golden. Staff of Domination? Okay! Voltaic Construct? Sure (it's another artifact after all).

Gitaxian Probe can reveal your opponent's hand and any possible removal that might be there. If your opponent does have removal, Metallurgeon can protect your stuff. Æther Spellbomb and Brittle Effigy can deal with certain problems while you wait for your combo pieces!


Overall, Sands of Delirium has lodged itself on certain deck-building shelves of mine, next to its milling contemporaries as well as game-ending infinity pieces. I feel like I've been wading through literal sands of delirium lately. Hopefully Magic 2013 keeps echoing my internal endeavors! Until next time!