ello all, and welcome back to the Lab! These past couple of weeks, Wizards has been honoring its quarterly tradition of a previewing a new set, card by card. It's like a lamp is slowly lighting up a dark room: The enlightening knowledge trickles in, bit by bit, and builds up to a giant crescendo of light where the whole lamp suddenly turns on. For those still in the dark (get it?) I'd recommend heading over to the newly dropped Visual Spoiler, for that moment has arrived. All of Scars of Mirrodin is finally viewable!

Now, I don't know about you all, but Scars of Mirrodin has me amped more than any block opener since Time Spiral for three huge reasons. First of all, it's a return to a block that's already been explored, which hasn't been done since Time Spiral. I have enjoyed the last three years of exploring the Blind Eternities, but it's good to come back to a familiar plane.

Secondly, I happened to be a big fan of Mirrodin block back in 2003. I think I may have opened more overall booster packs from all three sets (Mirrodin, Darksteel, and Fifth Dawn) than from any other block. Equipment, imprint, and the lovable robo-roaches themselves, the Myr, are among my favorite themes returning in Scars. 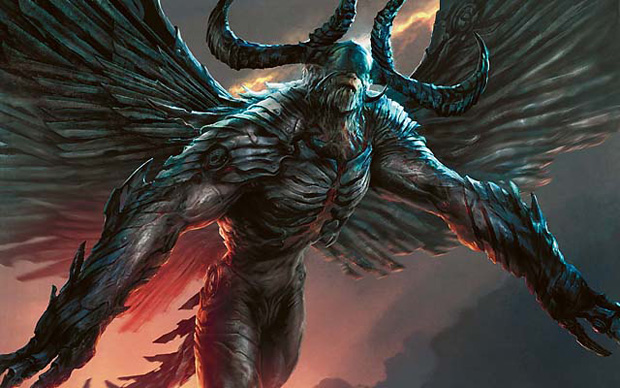 Thirdly, I love that the Phyrexians are back. After a noticeable decline in their general "let's-be-totally-evil-to-everyone-all-the-time"-ness (when was the last time they were storyline villains?), they're back. What I love about the Phyrexians as villains is their complete impurity and tenacity to put up a huge fight. You could call Phyrexia as a whole a well-oiled machine. (Yeah, I just did that.)

So, consider me completely re-converted to all things Mirrodin—or Scarified, as I call it. (I think Paul Gilbert fans might mispronounce that, though.)

Since the Visual Spoiler went up yesterday, I was originally going to dive headfirst into some exciting Scars cards to see what insanity I could create with them. A couple things stopped me from doing that. First off all, it's just strategic: I'm sure certain theme weeks are on the horizon, and I don't want to use up any potential material. Secondly, I don't want to delve into the set without playing with it at a Prerelease, so I'm going to hold off until next week. 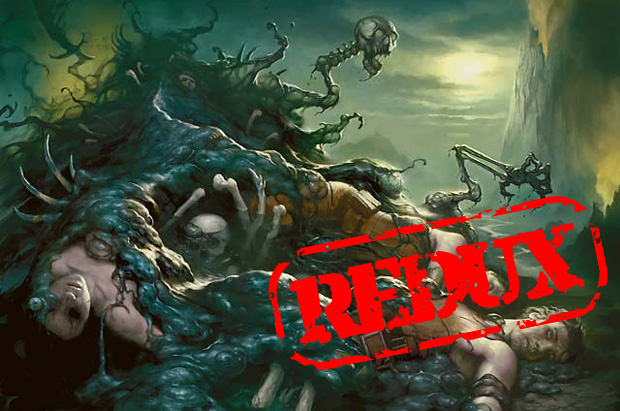 However, there's one card I'm going to build around today. Which one? None other than my second preview card, Necrotic Ooze. Before heads nationwide are scratched in confusion, let me say that the crazy Ooze is definitely worth looking at twice. Or thrice, or more. Some readers sent me some of their ideas, and I came up with some others.

I'm glad I have the whole set to work with, as one new card immediately jumps out as being great with the Ooze. Soliton provides a devastatingly cheap way to untap the Ooze over and over. If we had a super nasty tap ability as well, we'd have the makings of an engine. Now, if only Scars had some crazy tap abilities .... Just kidding. Bloodshot Trainee returns to the present in a fine way here: if the Ooze has his ability, it'll automatically be active! Myr Propagator offers an interesting Ooze option, as you'll wind up with Necrotic Ooze tokens. Splinter Twin can provide the same thing, but with haste. In fact, Splinter Twin is good on most creatures in the deck, including Soliton (

: Put a hasty 3/4 creature token onto the battlefield.) Inventive tappers from Standard that round out the deck. Cunning Sparkmage can turn your Soliton + Ooze engine into a blue Fireball. Reckless Scholar added to the formula creates the engine, "

: Draw a card, then discard a card," which seems like a good way to get creatures into your graveyard.

If you do get Necrotic Ooze + Myr Propagator up and running, try to make a ton of Ooze tokens, for more ability-hacking. Sword of Vengeance can offer haste to anything that wants it. Finally, Sphinx of Magosi and Ancient Hellkite both have awesome abilities that the Ooze would naturally love to use.

As I previously mentioned, I received a lot of mail regarding Necrotic Ooze's true potential. Many people wrote something to the effect of, "How about Gigantomancer?" Many more people took cynical slants with a version of, "How did you miss Fauna Shaman?" It's true those two green creatures offer two other Standard ideas with Necrotic Ooze, to go along with the two I created from last week. 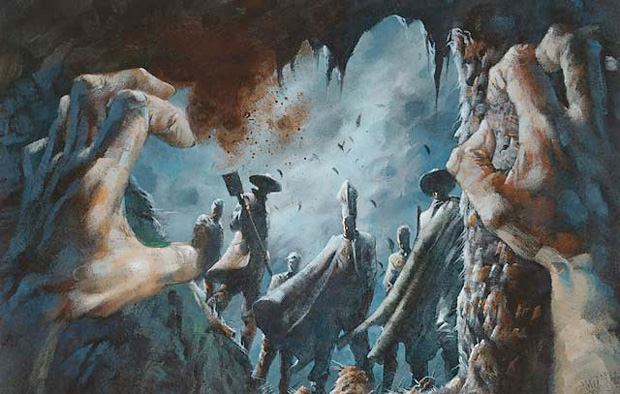 Today, though I'm going to slip into some older formats with the help of famed reader and creative decksmith Christian Moeller-Hoist. Christian was one of those who made use of Fauna Shaman, but his real focus was ... well, I'll have him tell you:

What a sweet combolicious card, that Ooze. It sure got my creative juices flowing. The first card I thought of that would work well with it is Buried Alive (Yeah, I know, not exactly standard legal—but few of my ideas are). I figured that with Buried Alive, it should be possible to find a three-card combo of activated abilities that can end the game on the spot. I found two: The first one is Morselhoarder with either Barrenton Medic, Devoted Druid, or Cinderhaze Wretch plus some sort of creature that can act as a win condition with the infinite mana provided. The other one is Pili-Pala along with a creature that provides more than two mana when you tap it, like Elvish Aberration (or the Harabaz Druid + allies that you used in the article—although that one needs more creatures on the table). The other combo can use a win condition like the first one that needs infinite mana or just something like good ole Tim that taps to win the game for you. I would probably include two kinds of win conditions along the combos for redundant redundancy. I suggest Bloodrite Invoker and Ambassador Laquatus.

Entomb would also work in this deck, but slightly different. You probably wouldn't want to use it to find combo pieces, since that way you need to draw three Entombs for it to have any effect. But instead maybe we could incorporate some sort of silver bullet strategy. I'm thinking of stuff like the Pit Fighter Legends like Visara the Dreadful, Arcanis the Omnipotent and the Kamahl, Pit Fighter. Godsire could probably also work with this kind of single-card strategy.

Another card that would work in the deck would be a card like Fauna Shaman. It provides a much-needed tutor for the Ooze and it can fill your graveyard with other creatures. And if she dies, no biggie—your Ooze'll just get her ability from your graveyard. Fauna Shaman actually works really well in this deck and in pretty much any stage of the game.

You might want some defense/disruption to stay alive until you can get down your Ooze. Might I suggest Cabal Therapy and Wild Mongrel. Both cards have the added bonus of providing you with some discard outlets for the cards that you no doubt are going to draw, that you don't want to draw.

How about that? Christian used the graveyard as a workshop for the always-malleable Ooze. Entomb as an instant-speed Ooze Army Knife! And a delightful toolbox with two different infinite mana combos ... and Godsire for kicks! Overall, some very creative stuff.

I decided to take a look at the original Mirrodin's rares on a whim, hoping for some inspiration. Besides, looking at Mirrodin's rares is fun anyway. The list reads like a future stockpile of what would become mythic rares (Mindslaver and Platinum Angel, anyone?). One card, Timesifter, reads just as broken for me as it did seven years ago. 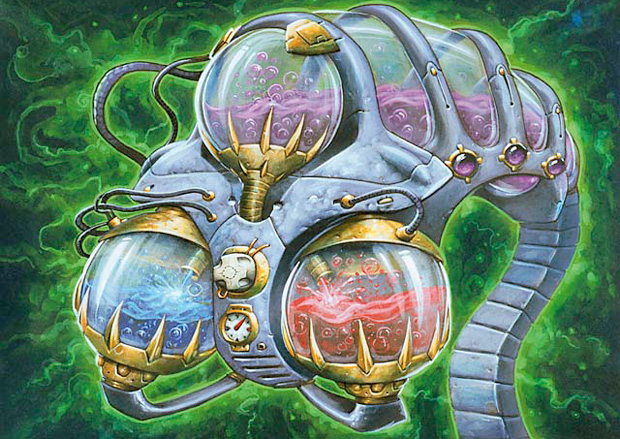 How best to use Timesifter? It's tricky to get a complete cycle of infinite turns, as your opponent might flip up a card with a higher converted mana cost, indirectly screwing up your plan. I'd recommend Hide // Seek early on, to get a glimpse of the highest mana costs in your opponent's deck. Later on, do some hard core Research // Development, choosing creatures cards (specifically, for future Worldly Tutors) from your collection with mana costs that'll beat your opponent's. Isochron Scepter and Research // Development have been friends for a while, so it seemed ideal to partner them up. Plus, the Scepter can imprint Hide // Seek as well.

Two split cards and all five colors? Looks like we'll need some super land fixing! We'll need to suck the lands out of the deck quickly anyway. One of my favorite parts about playing a control deck with Research // Development is that I can eventually find any win condition that I want. In a five-color deck, that's especially true! I couldn't resist adding Draco, which is absolutely tailor-made for this deck in a hilarious way (the highest converted mana cost, and the most secret domain ability ever!) 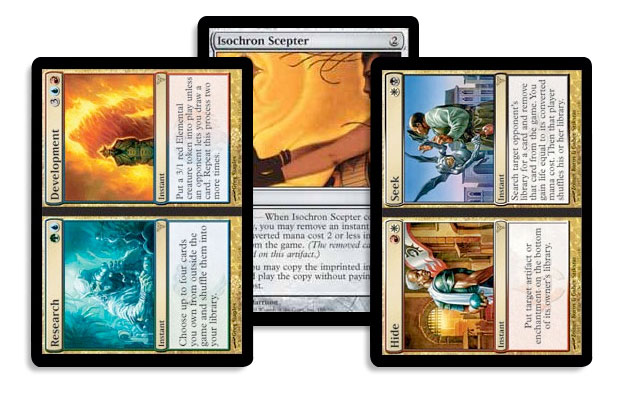 In the end, this turned out to be a crossbreed between a Timesifter deck and a domain deck, which seems appropriately random for a week in which I'm caught 'twixt previews and a Prerelease.