elcome to another edition of From the Lab! I should start off by mentioning that the results of the Build-Around Contest will not be announced this week. I'm very sorry about this, but rest assured that they will be here in approximately two weeks (leaving room for a scheduled theme week.) The reason for this is I just haven't cobbled together the best of the best yet. I have loved what I've read thus far, so no worries, you all definitely made my contest-loving (and results-reading) side happy.

So what shall we expect today, on yet another auspicious non-theme week at From the Lab? There are so many themes riddled throughout Scars of Mirrodin, after all, so I could focus on one of those (effectively creating my own theme week. Ha!) The problem with this is I run the risk of short-changing myself when that theme becomes an actual theme week down the road (Negative Ha: Ah!) 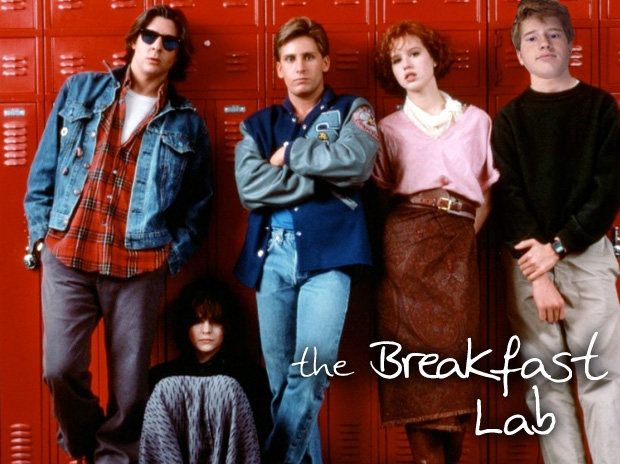 I was wondering how to proceed for this week while watching TV, and happened to flip to one of my favorite movies, The Breakfast Club: A classic tale of high-school strangers from different groups (or themes, one might say) coming together for a Saturday detention. Instantly inspired, I figured I could pull a card each from some of the different themes and write an old school build around column. While I don't have five decks to match with the five characters of the actual movie (I did five decks last week!) I'll go with three. Just imagine Elspeth Tirel (planeswalker theme), Tunnel Ignus (interesting rare theme), and Livewire Lash (Equipment theme) saddled in detention!

(Incidentally, the mischievous Tunnel Ignus could match up with Bender. I see Elspeth Tirel as Claire, but an argument could be made for Allison, I suppose.)

So, Elspeth gets a new card in Scars of Mirrodin! The last time we saw her, she was one of the eagerly awaited planeswalkers of Shards of Alara, as a Knight-Errant. I've been very enthralled with her recent web comic, which smartly deals with how all three of the planeswalkers of Scars managed to make it to Mirrodin. This time, we see a slightly different side of her. 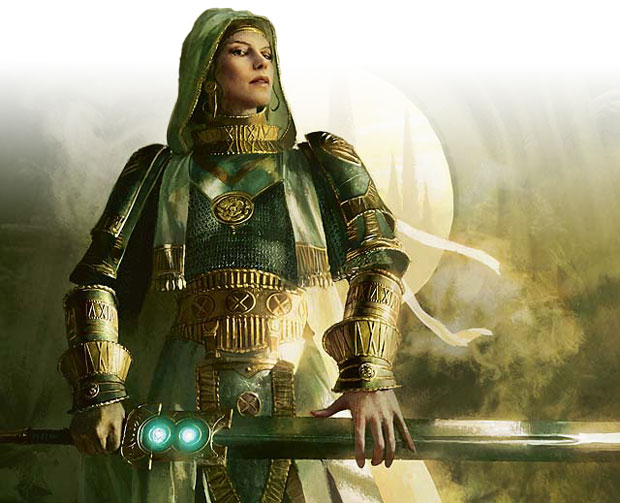 This Elspeth still makes tokens, but at a more hyper rate than before. Churning out three 1/1 Solider tokens at a time isn't anything to sneeze at. Instead of an Angelic Blessing, the new Elspeth has a sneakily powerful Folk Medicine, which she can use to pump up two loyalty counters and prepare for her big bang. While making everything indestructible was super fun, killing about everything on the board is also super gratifying (especially if you managed to create some Solider tokens as well!)

In short, the new Elspeth looks awesome. As the fourth mono-white planeswalker, she stands strong. The third was Gideon Jura, a cool guy, while the second was the first Elspeth, of course. The first was a long forgotten 'walker named Ajani Goldmane, but I'm getting bored just thi ... Wait!

Ajani Goldmane! No wonder he and Elspeth are friends in that web comic! They work perfectly with each other! Let's examine the ways.

"+1: You gain 2 life." Obviously Ajani's first ability helps his ultimate, but it can also combine with Elspeth's first ability ("+2: You gain 1 life for each creature you control.") to create a life-gaining powerhouse.

"-1: Put a +1/+1 counter on each creature you control. Those creatures gain vigilance until end of turn." It's like a line-by-line link! This combines perfectly with Elspeth's second ability! Make three tokens, and then promptly give them all +1/+1 counters (oh, and vigilance too!) 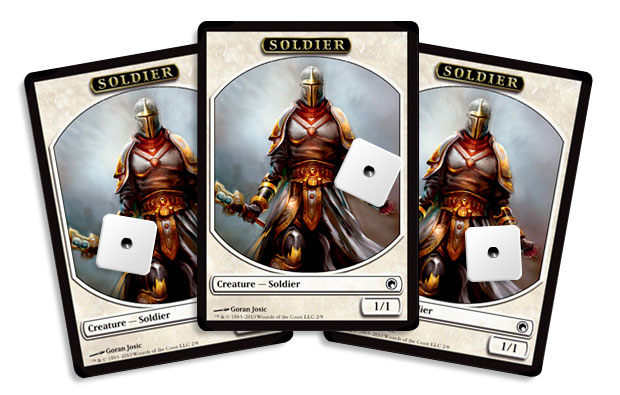 "-6: Put a white Avatar creature token onto the battlefield. It has 'This creature's power and toughness are each equal to your life total.'" Um, wow. Not only will the aforementioned super life gaining combo beef this bad boy up, it'll survive Elspeth's board sweeper!

Since we're dealing with two types of counters here (loyalty and +1/+1) I figured I'd throw some proliferate cards into the deck. (Note: I'm sure this will become a long and fulfilling habit.) Contagion Clasp and Steady Progress should do the trick.

Since everything thus far has happened to be within Standard (as of the incoming rotation), I'll stick with that model for kicks. The rest of the deck was pretty simple. Anything that happened to involve life gain, tokens, counters, or some combination of the three made the deck. It turned out to be a fun looking list that, as you all should feel free to remember, is definitely modifiable. Mold it to your tastes!

In fact, here's another build of the deck I attempted, this time cutting the proliferate aspect of the deck and starting with a base of white and green allies. Talus Paladin has seemed pretty absurd to me since Worldwake, but I've never used it. Here, it provides the important lifelink for your Ally beats. Turntimber Ranger makes tokens that survive Elspeth's big bang, while tokens from Join the Ranks are ideal for Ajani pumpage. Ondu Cleric, meanwhile, fits almost too well.

I gotta say, Tunnel Ignus is one of the sneakiest looking Elementals in all of Magicdom. Everything from his curious feet to the dark smoke circulating his head to his flavor text says, "I will cause chaos!" In play, the Ignus can act as a pretty viable answer to landfall. You know, the mechanic that was prominently featured last block? Simply laying a Tunnel Ignus will cause all players of fetch lands to grimace. Worse yet will be players of the mighty Primeval Titan. But you know what? I'm going to use Tunnel Ignus proactively! Wacky, huh? 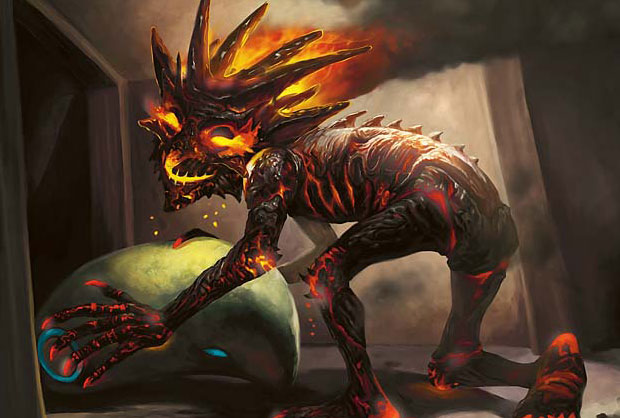 There are a lot of routes I could take here, but I decided to go with a lesser known one: Rites of Flourishing. Now, the cards and lands fly twice as fast! At least, they would normally, but a turn two Tunnel Ignus kind of squelches those hopes. If your opponent decides to play through the Ignus (a noble strategy), slam 'em with a Fallow Earth (or worse yet ... a Plow Under). The land development that they took a Lightning Bolt to the face for gets undone, and you wind up way ahead!

You thought cards like Path to Exile and Ghost Quarter were good before, huh? With the Ignus gumming up the works, Ghost Quarter becomes one of two things: Itself with an unstoppable 3 damage behind it, or a straight up Strip Mine (this is assuming your opponent doesn't search.) Along similar lines, the only thing holding Path to Exile back from being completely busted is its optional land-fetching ability. Wait until your opponent plays a land, and then snipe that threat across the table. If your opponent opts to find a land, Tunnel Ignus notices with a wicked grin.

With your Rites humming along, you can move forward to the second phase in your game plan, Realm Razer. In the past I have liked going infinite with the Razer (using two Lotus Cobras, Sigil of the New Dawn, and Blasting Station). However, this time all I want to do is cast Realm Razer at the opportune moment. This moment is hopefully one where your opponent has taken some Ignus abuse and has a frustrated land development. Simply cast the Razer, with no hijinks at all. Now your opponent has zero lands and not too much standing in the way of your 4/2 Beast. The best part is, even if your opponent blocks it to death, all those lands will re-enter the battlefield at the same time, something Tunnel Ignus likes to see.

Finally, my favorite part of the deck! Since Tunnel Ignus is in fact an Elemental, I went with some Flamekin Harbingers to search for it (or multiples! Hee hee hee.)

Modifiable, as always. I thought Chandra Nalaar would be fun as a singleton, ticking away while your opponent is frustrated. The Elementals are just fun, unused creatures that I thought might work in this list.

Livewire Lash is just one of many interesting Equipment to come out with the release of Scars of Mirrodin. I could spend a section on each of them (especially the bombastic Sword of Body and Mind, which I was happy to pull at the Prerelease), but for now, I'll indulge my wacky side. Livewire Lash acts as a Bonesplitter (or a non-indestructible Darksteel Axe), while tacking on a nifty ability that triggers whenever the equipped creature becomes the target of a spell. Note, not an ability, only spells. 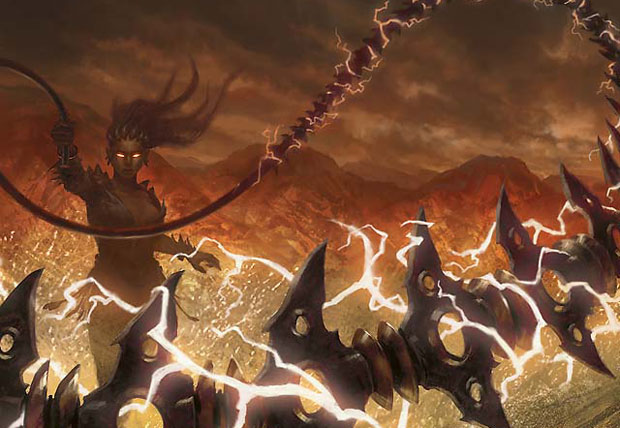 I asked myself, "What creatures like to be the targets of spells?" The answer came in the form of Spellwild Ouphe. A forgotten card from Future Sight, the Ouphe reduces the cost of spells that target it by

. Equipped with the Lash, it becomes a reasonable 3/3 that dares anyone to target it.

I wanted to both protect my Ouphe and target it as many times as I could. An intersecting card was Anoint. Spellwild Ouphe reduces its buyback cost and in turn, Anoint protects it from various forms of removal. A good start, made even better by the resulting engine: "

: Shock." I think the old buyback cards are pretty fun and obviously very underused, so I added another one, Change of Heart. It can stifle attackers as it normally does and creates the same engine with a Lashed Ouphe.

Dawn Charm is a pretty good catchall card that can regenerate the Ouphe if need be, so that went in as well. Note that while the Ouphe is ideal, any creature can be suitably Lashed. That's why I went with a more beatdown-esque strategy, using creatures with high toughness or protection from various colors. The Ouphe stuff still works: I'm just saying I didn't rely on it.