I've had an adjustment and now I is gone, just for our information.

It is good that it happened. We can listen to the whispers of the trees. They have a lot to say, these wooden colossi. Running the fingers of the hand over the gnarled cracks in the bark now feels like receiving a swift injection of insight. Craning the neck to observe the patterns of the branches now yields a dazzling harvest of detail. Hoisting the body up into the mesh of green, clutching the thick white beams above for support. Thin rays of sunlight dapple the leaves overhead... but no sky. The sky is green and white now. The sky... the sky...

Pressing the ear against the trunk before descending. Listening to the new voice. Slithery jelly words. Mat'Selesnya. The voice is in the tree and in the head.

Climbing down from the tree. One last caress of its oaken flesh. The hands come away scabbed. The hands drop. The hands stare at the tree. Twitching from a distance. A sterilized separation from the self. Clawing at the barrier with immobile limbs. 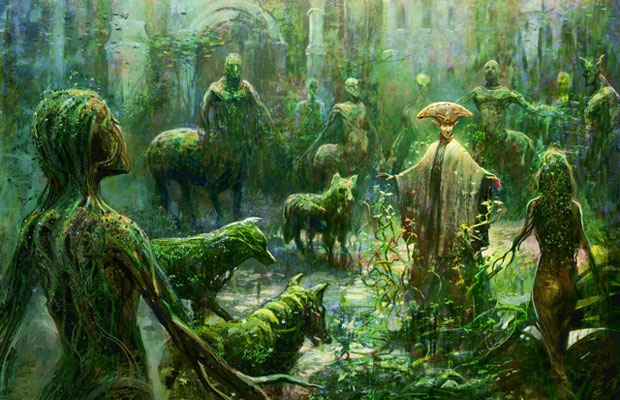 The Voice of the Woods.

This innocuous Elf card, originally hailing from Onslaught, is a succinct generator of monstrous 7/7 trampling Elemental tokens. Naturally (haw), this breed of token is one of the most exciting prospects for mass population. Some of the other considered candidates include Godsire, the Serra Avatar token that results from Ajani Goldmane's ultimate, and the mighty Marit Lage token hidden under Dark Depths, which, with a bit of Mirror Gallery hackery, can be populated (to create the most fearsome creature force ever).

In the end, Voice of the Woods was called back and eventually won the part. Now for the primary method of population. A total of eleven cards bear the new mechanic of Selesnya, some of which are also mentioned in today's column. With this deck, Growing Ranks seemed like a mildly amusing way of accumulating a bunch of 7/7 trampling tokens, as it only requires a down payment of four green mana, and instantly starts humming. Druid's Deliverance felt right for this deck as well, as a combat damage prevention effect is a worthy trick to consider in most green deck skeletons.

These effects of population should always be pointed at the 7/7s, but if Voice of the Woods hasn't shown up yet, there are some other token options. Since Voice of the Woods needs other Elves to tap, the deck was filled with many producers of 1/1 Elf tokens. Gilt-Leaf Ambush is a handy spell that can often dole out a venomous surprise. Hunting Triad is a versatile spell that can either make three more Elves or slap three +1/+1 counters on a creature. Imperious Perfect is a great power booster for Elves and can steadily churn out an army of followers. The singleton Rhys the Redeemed holds a beloved spot in the Magical minds of many, and for good reason (that being: It's a Parallel Evolution... on a stick!) Finally, Spitting Image, which can Clone-token any creature on the board. Imagine casting a Spitting Image on an opponent's insane creature, and slowly populating it with Growing Ranks. Fuzzy. 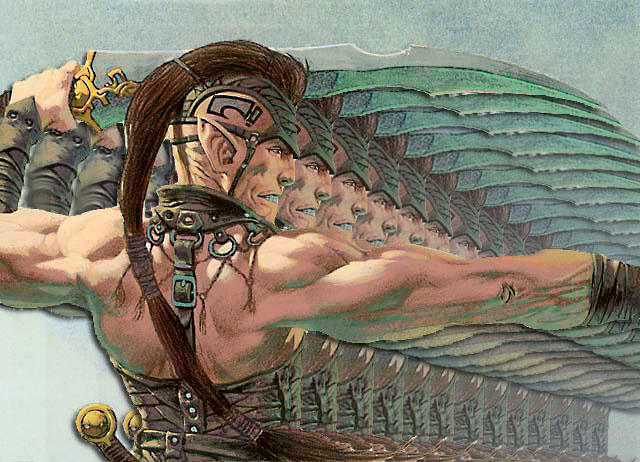 Thornweald Archer and Elvish Harbinger were the last recruits. The latter Elf can find any creature in the deck, including the singleton Ezuri, Renegade Leader, which can provide a solid secondary battle plan. Among the land choices, Gargoyle Castle seemed a fitting inclusion.

4 Voice of the Woods 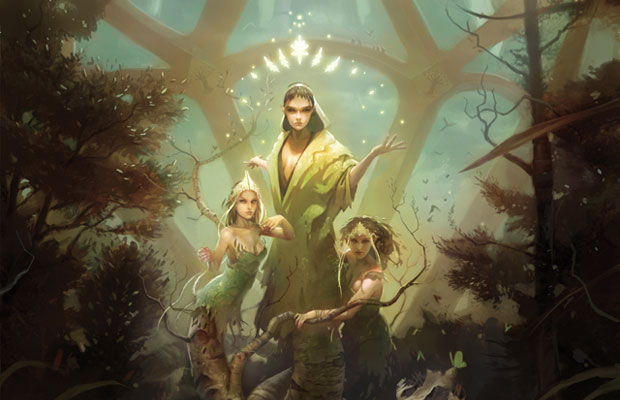 The Voice of Selesnya

Trostani, the "dryad triad." Tacking an Angelic Chorus effect onto a repeatable source of population is a recipe for insanity. The legend is open-ended enough to promote all sorts of wacky decks. Phyrexian Processor, for instance, has a new bestie.

It seems like a worthy experiment to construct a Trostani deck out of the available Standard card pool. Within these confines, there were some juicy tokens that looked fun to populate. Grove of the Guardian can plonk out a vigilant 8/8. The rumbling Armada Wurm, for example, brings a 5/5 trampling playmate to the party, Broodmate Dragon style. Thragtusk continues to astound, and its 3/3 Beast is always welcome under Trostani's watch.

What's fascinating about those last two creatures is their complete synergy with the flickering sub-vibe of Avacyn Restored. Two of that set's soaring Angels play very nicely in this list. Restoration Angel is the current critical darling, but her kid sister Emancipation Angel does excellent work as well. The rest of the deck's creatures certainly appreciate the flickering climate. Gatecreeper Vine and Borderline Ranger are helpful mana-smoothing cards that trigger Trostani, and Captain of the Watch provides another raw boost of power.

One recently printed card that seems gaga with Trostani is Rhox Faithmender. Boasting a toughness of 5, the Faithmender's life-doubling is an obvious combination with Trostani. With the pair on the field, an incoming Tree of Redemption will jolt your life up by 26 points!

Four singletons give the deck some variance. Collective Blessing is a thudding boon for any sort of token deck, including this one. Ajani, Caller of the Pride has grown on me since its release (it's probably the double strike.) And two miracles round things out. Terminus can sweep the board, and Entreat the Angels can pour flying 4/4s into your ranks. Populate can turn even a minimal Entreat into a fully-fledged one, over time. 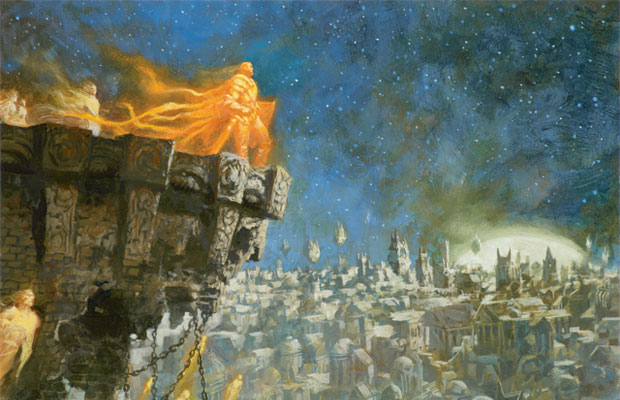 The Voice of Avery Garon

This person emailed in a decklist with a curious idea: turn Phantom General into a token, so it can pump itself. Chuckles. Use Rite of Replication. Guffaws.

The email read: "I decided to break the mold and the card by making Phantom General a token. It pumps itself, it pumps other copies of itself. I figured

would be a good combination of colors, so I could include Cackling Counterpart and Rite of Replication. I splashed green for Parallel Lives and the new Selesnya mechanic, populate. Drogskol Captain pumps the Phantom Generals as well as the Geist of Saint Traft, who makes his own tokens of the Angel variety. Rhys the Redeemed, Growing Ranks, Wayfaring Temple, and Followed Footsteps round out my token-producers. Finally, I included the great token pumper Intangible Virtue and Idyllic Tutor to find any of the enchantments."


Using Cackling Counterpart to start a population of tokens is my kind of weird. Yes, mine. See, 'cause its blue, and using blue in the last deck triggers the (foreshadowed) return of my individuality, and the end of that charade. Get it?!!!? Anyways, this list looks bonkers. Landing a Followed Footsteps (or even crazier, a kicked Rite) on a Drogskol Captain, a Phantom General, or a Geist-Honored Monk sounds awesome. Populating the tokens of Geist of Saint Traft is just wicked. Zany cards abound, from Twilight Drover to Rhys to Parallel Lives.