ello all, and welcome back to the Lab. We're smack dab in the middle of the second week of January, and secretly, we're all sick of 2011 already, right? The snow, once delightful (for about twenty minutes tops) is now dreary and depressing, the roads are icy, and winter sicknesses (the most annoyingly harmless of all illnesses) are already spreading like Phyrexian oil.

Okay, so maybe I'm just a little adverse to winter. Technically, I believe the term is "Seasonal Affective Disorder" which makes sense, since winter always seems to make me SAD, or sometimes even a little MAD (I'm not even going to try to invent a fitting acronym here.) Despite my slight melodrama, I'll be fine. Especially when a new Magic set is on the brink of releasing and cheering me up. I guess that's a roundabout way of saying that the first week of glimpses at Mirrodin Besieged is on the horizon. Judging by my preview card, the set is Bonkersville, and my card's the mayor. 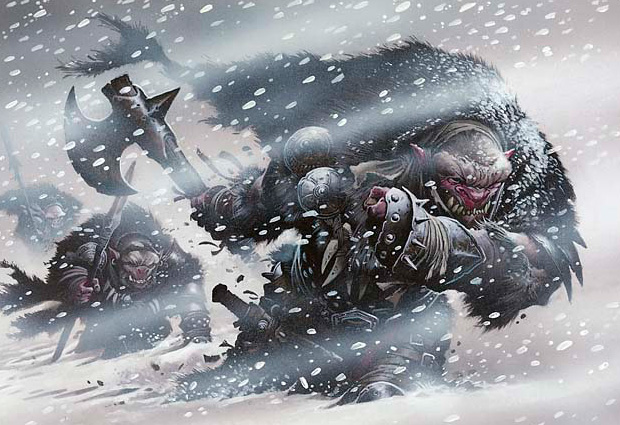 So what to do during these two weeks in January that are the worst weeks of the entire year? Come on, even the movie business isn't inspired during this period. (Season of the Witch, anyone?) Last week I built some kooky decks around the Happy Holidays release cards that always seem to me like year-by-year previews for the third Un- set. I received feedback from both sides of the spectrum, with detractors mostly being annoyed by the fact that these cards aren't widely available. To this I must sheepishly say, "I just like building decks." (Positive responses primarily informed me of the most Evil Present of all time: Phage the Untouchable. Yow.)

And on that note, today I'm going to embark on a thematic mission: To build four decks, one around each season. I haven't stretched my theme deck muscles in a while, but it's a fun process and I enjoy the restriction and challenge. Consider this column as sort of a "calm before the storm" in the sense that my preview card for Mirrodin Besieged is actually the craziest thing I've ever seen. If you like, this is the arty track to set up the lead single. Kinda like ...

Which is my awesome hipster segue into the Spring section. A secondary goal I have here is to make each deck feel like its respective season. Obviously this will be different for each person; in my case Spring is bubbly and fun. 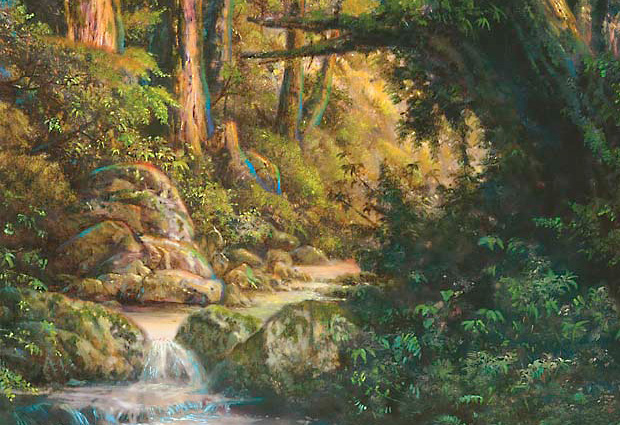 Appropriately, most of the Magic cards in existence with "Spring" in their names are green. Heartbeat of Spring is most telling, as it injects extra energy into each land on the board. Harbinger of Spring is flavorful as well, although it's a shame there aren't any other Springy Spirits to soulshift. Rites of Spring and Wellspring amp up your mana even further. Propelling all that mana into a giant Mind Spring sounds like good times as well. Nature Spring is nice as well.

Keep the control vibe going with Temporal Spring and Hot Springs. Your only win conditions get their Spring through flavor text: A timely Hymn of Rebirth could net your opponent's best fallen creature, and Krosan Beast (yep) can become an 8/8 with some effort. Vitu-Ghazi (I'm counting it) and Springjack Pasture can make tokens to stall until then.

Spring in my Step

Okay, so this experiment was going well until I hit a slight roadblock: A whopping three results for "Summer" in various card databases. Even a careful flavor text check didn't add to the list by much. I wound up getting a similar total for Autumn. (Winter, as you'll see, wasn't a problem. Oddly.) So I just built neat decks around one specific card for Summer and Autumn. 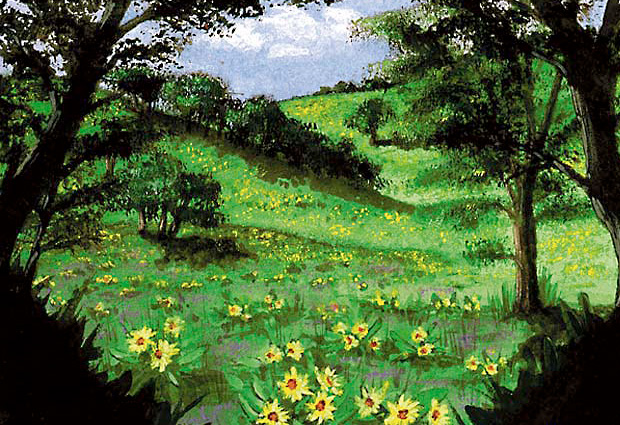 The only viable candidates for Summer were Midsummer Revel, Sakiko, Mother of Summer, and Summer Bloom. The Revel isn't really build-around material as much as it's a fun singleton, so that left the legendary Snake and the Bloom. After deliberation, I decided to build around Sakiko, Mother of Summer, a card I've never really given too many glances.

What could be a modern allure of Sakiko, Mother of Summer? Since there isn't mana burn any longer, a sentence in her text box was sent to oblivion. I'm more interested in her mana-making ability though. My first conscious decision was to cut back a bit on my usual rigid "23-24 lands almost always" rule. If I'm building around the Mother of Summer, I want to rely on her.

A new card that Sakiko, Mother of Summer's bound to love like a second summer is Omnath, Locus of Mana. This pairing is pretty sweet: Omnath gets bigger with every green mana in your mana pool, and thus hits harder ... which will create even more green mana. An always fun add into hyper green mana decks is Patron of the Orochi. This is the only instance in which Sakiko, Mother of Summer's bloated cost works to an advantage ... don't feel squeamish about offering her to the snake god.

Shizuko, Caller of Autumn may have the wrong season in her name, but as the deck shaped up it became too hard to resist adding her. Magus of the Vineyard gets your strategy started off right, and a quartet of Weatherseed Totems complete the mana-making cards (including all the basic lands and Mercadian Masques era depletion counter cards.)

Win conditions? We've got plenty. Since Sakiko, Mother of Summer triggers off of creature damage, I looked for a way to turn tons of mana into tons of tokens. I landed on Wolfbriar Elemental and Gelatinous Genesis, the latter of which I try never to cast the same way twice. Two level up creatures round out the deck; the burly Beastbreaker of Bala Ged, and the Elephant making Kazandu Tuskcaller.

4 Magus of the Vineyard 3 Gelatinous Genesis

2 Patron of the Orochi
35 Cards

The eternal battle between these two monikers for the season of (approximately) September through November will probably continue forever. I try to balance my usage of each term evenly; while "Autumn" certainly sounds fancier (and looks it: That really is an 'mn' mashup), sometimes you've gotta go with the monosyllabic "fall." 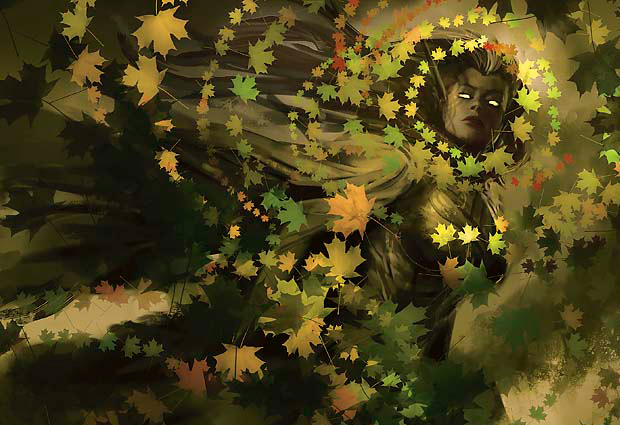 And no, this isn't just a cop out to tap into the numerous cards with "Fall" in their names. I did look for some, but only the most fitting. This turned out to be Falling Timber (it's a pretty peaceful time, falltumn is.)

Elsewhere, I'm enjoying my rediscovery of Autumn-Tail, Kitsune Sage. One of the more exciting flip cards from Champions of Kamigawa, it was always fun trying to load up Kitsune Mystic with the proper enchantments. Roughly six years later, Kitsune Mystic has a new best bud: totem armor. Umbra Mystic, to be exact, but the actual mechanic is fun times too. Suit up either Mystic with an Eland Umbra to instantly amp up its defense. Another good one is Primal Cocoon, my friend Wes's latest pet card. You're probably not going to attack with Kitsune Mystic anyway, so just let it grow until you can flip it, then shuttle it off somewhere else and attack with a giant Kitsune Mystic.

Since Aura decks like creatures to enchant, I added some decent bodies. Aura Gnarlid can get out of control pretty quickly. Kor Spiritdancer is possibly busted. Suit up either with a Predator's Urge for kicks. Shuttling the Urge around with Kitsune Mystic is fun as well, especially when you have an Eland Umbra keeping your creatures alive. Another fun recent Aura is Celestial Mantle. Move it to an unblocked creature (say, Aura Gnarlid?) and watch the life gaining commence.

While checking up on "autumn" in flavor text, I discovered that Autumn Willow apparently has a lot to say for being from Homelands. Her raw insight is extraordinary. "Those of faith are those of strength." Deep. Take that, Uncle Ben.

A pun that describes itself. Or something. 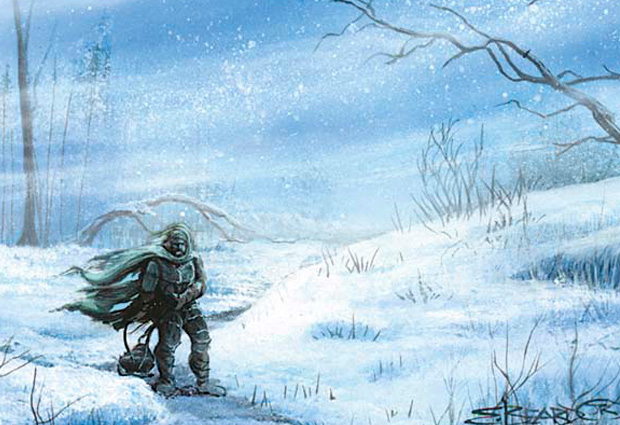 Winter obviously sucks in the Magic universe as well. You only have to look at Winter Orb, the single most mind-numbing card ever, to confirm that statement, but other candidates are out there. The mere Grasp of Winter could be enough for a turn-three concession (yep, winter kills lands). Wintermoon Mesa is bleak. And every time I attempt to cast Winter's Chill, I cry. Bitterly.

Building a winter deck is the easiest mission of the four, since every snow card ever made applies. I was hoping for a totally out of nowhere Wintery rare and got my wish in Winter's Night, a pseudo-Mana Flare for snow lands. Thus, I want to ramp into Rimefeather Owl as soon as possible and start turning my opponents lands into snow lands as well. Then the Night can lock them down too, and my Owl becomes huge. To keep your opponent off your back, we have a triad of options. Winter's Grasp can stall their development, and Winter Blast and Winter's Chill can stymie your opponent's attack force. Even Cover of Winter can be slightly useful!

Elsewhere in snow land, Into the North thins your deck and accelerates. Frost Raptor is an evasive flyer. And Rimescale Dragon can clear the skies for it and the Owl to swoop in for the kill.