ome people seem to have problems with my friendly introductions week in and week out, but I think they're effective in introducing myself every seven days. You just never know when a new reader might first click on From the Lab. And, since we're about to release a new set relatively soon (Worldwake, for those out of the loop) there might be a couple new readers out there. To reiterate one of my normal openings: Hi, and welcome to From the Lab, the Johnnyest column around!

Today, as I mentioned at the end of last week's preview of Amulet of Vigor, I have another preview card to show off.

Wait, really? No, I'm not really previewing Jace, the Mind Sculptor. It's just that my preview card has a lot to do with the new Jace (or is that the old Jace?). For instance, the general flavor of the card (including the artwork and the flavor text). And once you check out Selective Memory in the flesh (er ... paper? Ink?), I think you'll agree that it belongs in the Jace subset of tricky blue cards.

Well, that's one way to shorten your library. Selective Memory is, as its reported playtest name of "Spell Severance" attests, a riff on the classic blue spell Mana Severance, which could exile any number of land cards. Selective Memory, obviously, does the opposite. 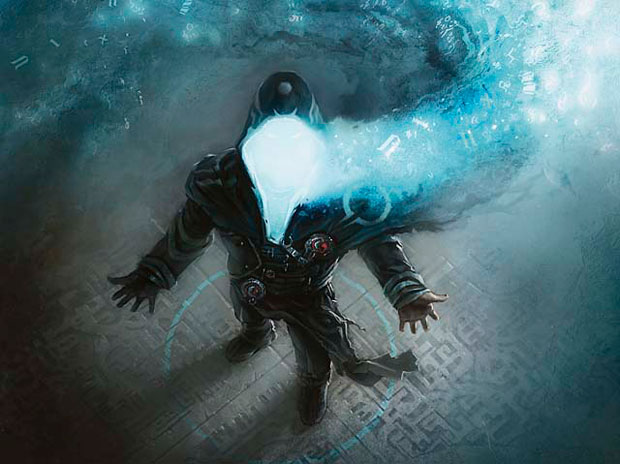 Of course, neither of those situations above is completely foolproof, as you still have a large amount of lands in your library that you can't mess with. You can turn this to your advantage, however, by running a deck that likes topdecking tons of lands. Hmm ... a (possibly recent) mechanic that actually likes it when you topdeck lands ... Zendikar block ... hmm .... Oh, landfall! With Oracle of Mul Daya perhaps supercharging your drops, feel free to amp up a Rampaging Baloths or something similar. 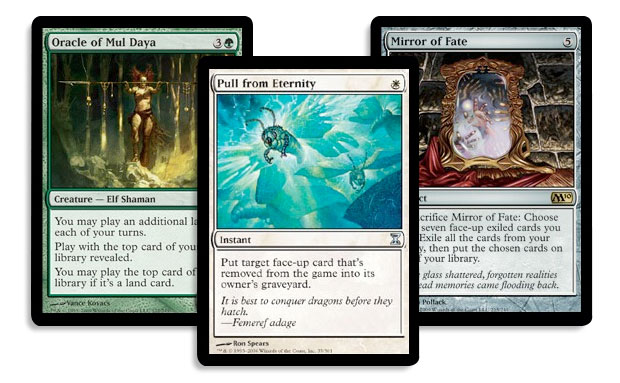 All right, now let's get to some decks! 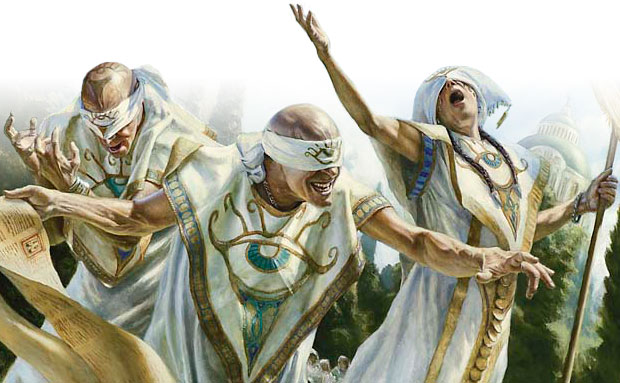 When I first considered exiling every nonland card in my library with Selective Memory, leaving a deck full of nothing but lands, one card instantly sprang to mind. And luckily enough, it was in Standard. Reintroduce yourself to Skyward Eye Prophets.

Known as the Coiling Oracle Machine (at least, in my mind), Skyward Eye Prophets would take to a library stuffed with only lands like a Valakut, the Molten Pinnacle to a mono-red deck. Since you're guaranteed to hit a land, it'll pop onto the battlefield untapped.

Then I thought of a secondary combo piece. A piece that also exists in Standard. A piece that can be found in the Visual Spoiler section of the Worldwake product page (where all the previewed cards can also be found.) This piece has a name: Tideforce Elemental. This crazy card is basically a Puppeteer, but with a super-crazy landfall ability: It untaps (!) whenever a land enters the battlefield under your control (!!). These abilities lend themselves to many Johnny decks, but let's stick with this budding list. 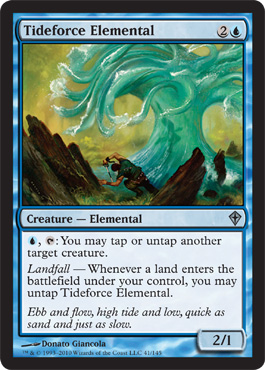 It would seem, then, then a good way to take advantage of this combo would be to use other landfall cards. The aforementioned Rampaging Baloths could make tons of 4/4 Beast tokens. Hedron Crab could mill your opponent to death. Lotus Cobra could add absurd amounts of mana to your pool (which screams overkill, as you could just stop the Prophets process and untap about twenty lands next turn.)

Of course, an important aspect here is that each land in the deck should ideally be able to produce blue mana and enter the battlefield untapped. Since we already have to compensate for the triple colored Skyward Eye Prophets, let's keep this list as blue as possible. That means sticking with Hedron Crab as our victory condition. Oracle of Mul Daya and the Crab make a combo themselves, so I'll shoehorn that interaction in there. Hedron Crab is pretty fragile, but remember that you don't have to cast it until you're ready to go off with the Prophets.

After playtesting for a bit, I added some basic Forests and one Plains. Even if you hit one with the Prophets, you should have an untapped Island at the ready to activate the Elemental anyway. Besides, playing with those basics lets me cast the Prophets and other green cards more easily.

This deck plays as a synergistic whole for the most part; you may get the combo off and you may not. The Wargates are in there to help you find key permanents, and Obelisk of Bant can produce green, white, or blue mana. I picked it over Noble Hierarch because I normally couldn't stick the Hierarch until turn three anyway, and besides, the Hierarch gets used too much. Tideforce Elemental can also untap Frontier Guides and Merfolk Looters.

This is just a reminder that while I made this deck using the cards in Standard, this deck is also a purely casual concoction. This is From the Lab. Tournament decks are simply not discussed here. As per the 'casual rule,' feel free to switch out some cards if they don't tickle your fancy. I don't expect every deck I make to play perfectly, and I therefore don't expect any overwhelming negativity towards my card choices. If you care enough to disagree, I'm sure you care enough to alter the deck to your tastes! 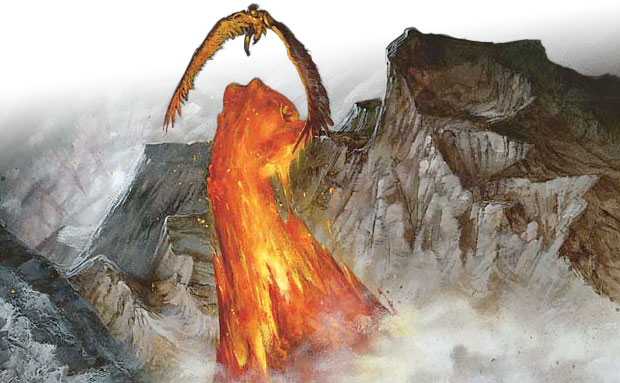 Next, I noticed that there is a neat interaction between Selective Memory and fellow blue Worldwake card Treasure Hunt. If you use Selective Memory to exile every nonland card from your deck, a subsequent Treasure Hunt will (since there isn't a nonland card to be found) draw your remaining library (a bunch of lands.) A victory condition for this scenario could be the simple Seismic Assault. Once you've Treasure Hunted for a bunch of lands, discard them all to the red enchantment for some lethal damage. 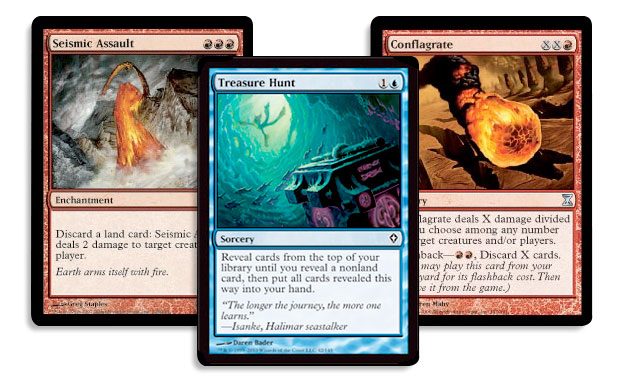 Another plan for victory instead could involve a giant Conflagrate. Once you have a giant land-filled hand, discard it all to flashback Conflagrate for the win.

Here's the deck you'd probably get when you mashed these ideas together.


I added the Pulses and the Izzet Boilerworks for some opportunities to get Conflagrate into the graveyard. They're decent cards for a blue-red spell-heavy deck anyway. The 30 lands strategy makes for a higher Conflagrate, and often gives you a ton of lands on a Treasure Hunt even before casting Selective Memory. 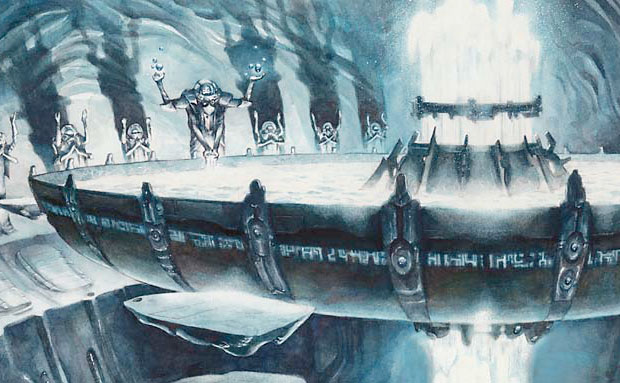 This last idea is slightly related to the previous one. Instead of exiling every nonland card from my library, this time I'm going to leave just one. Which one? Beacon of Tomorrows.

Assuming I can draw it and cast it, I'll take another turn while the Beacons gets shuffled into my land-only library. On my new turn, all I have to do is find it and cast it to repeat the cycle. What card can help me pull this off? Abundance.

As long as I name "nonland," I'll flip right to Beacon of Tomorrows once it is the last nonland card in my library. Assuming I have eight mana, I can just cast it and take another turn, knowing I'll draw into it again.

As seen above, Treasure Hunt and Selective Memory make quite a pair even when you're not Conflagrating for 20. Treasure Hunt itself (as Brian David-Marshall took note of in his preview article) is a useful land-finder and library-stacker all in one.

This deck just wants to play defense until it gets to eight mana and Beacons for the win. I've wanted to make use of Winged Coatl as a surprise deathtoucher for a while now, and this seems a fine place to do so.

4 Master of the Wild Hunt
60 Cards


Use Hunting Wilds and Rampant Growth to ramp up to eight mana. Remand and Winged Coatl can stall. Once you get infinite turns, Budoka Gardener and Master of the Wild Hunt become your victory conditions. Use them to pump out infinite Wolf or Elemental tokens, with which you swarm for the win. Meanwhile, Beacon of Creation is another fun Beacon to pull a similar trick off with. If infinite turns aren't your bag, sub that part of the deck out for more Beacon of Creations and Blasting Stations. That route could see Sosuke's Summons and Patagia Viper as Snake token makers. Just a thought.