Spring In Our Steps

ello all! Before stepping into the dark but friendly shadows of my Lab today, head outside and take a deep breath. If your neighborhood's weather is anything like mine at the moment, spring seems to be on the horizon! Spring is quite possibly my favorite season, and I'm hoping the new sunshine can energize my Magical creativity. Not that it needs a complete jumpstart, but with an exciting new set on the horizon and Worldwake already becoming canon in Magic's timeline, I'm just beginning to reach for straws. 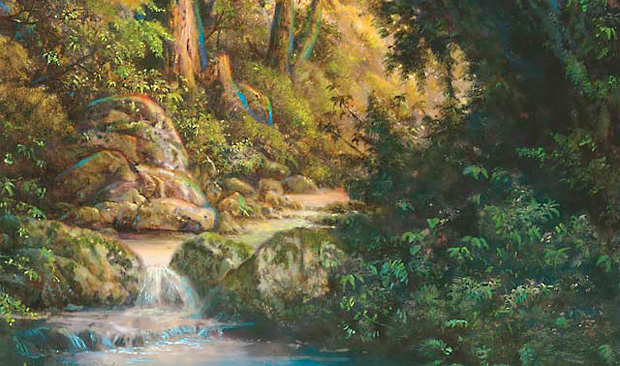 That's why today's column will have four decks, two making use of some rather obvious combos that I haven't covered yet, and two featuring interesting Worldwake cards that look build-around worthy. Let's hit it!

Kalastria Highborn is one of two new cards in Worldwake to give the general mono-black Vampire deck a kick in the pants. The other is the spectacular removal spell Urge to Feed, but let's discuss the Highborn for a bit. At only two black mana, this Vampire Shaman will punish your opponent for destroying your Vampires, but it's even more potent when you sacrifice them yourself. That's why I started with Vampire Aristocrat as a suitable partner. If you have knocked your opponent's life total down quite a bit but can't quite break through to victory, just proactively feed the Aristocrat and drain your opponent of the last of their life. Some vampires don't need help sacrificing themselves, like Vampire Hexmage.

Here's the obvious part of this deck list: Bloodghast. There's no better Vampire to add to this budding list, because this spectral spook likes to come back from the grave. A lot. Just play a Swamp, put the Bloodghast back on the battlefield, sacrifice it to an effect, and tap that Swamp for black mana to drain for 2. And as a bonus, if your opponent's life total is sufficiently low, you'll be able to swing with a hasty Bloodghast in the middle! I added a full four copies of Korlash, Heir to Blackblade, as he's the only Harrow-esque effect in black. When you discard a second copy of Korlash for his grandeur ability, Bloodghast will trigger twice, giving you two possible Highborn sacrifices.

I covered some casual Standard decks last week, so I knew I didn't want to make the Standard mono-black Vampire list that everyone's pieced together already. Instead I dove into the way-back machine and came back with Crovax the Cursed! This legendary Vampire likes to sacrifice creatures to make itself bigger, and it deals with +1/+1 counters just as Urge to Feed does. It also allows me to play some normal but fun vampires, like Pulse Tracker and Soul Collector.

4 Urge to Feed 3 Feast of Blood

Perimeter Captain is the type of card I love to see, as it just screams, "Build around me!" I saw two possible builds with the Captain. The first was white-blue with such lovable defenders as Wall of Denial, Psychic Membrane, and Wall of Kelp. A smattering of card draw and bounce complemented the deck. However, I had trouble actually winning games, and even though I gained some life here and there, the deck wasn't working.

I started over, and decided to pair the white with green. Defenders such as Wall of Roots and Carven Caryatid stepped in. I decided I might as well keep the life gain theme going as far as I could, so I added Wall of Essence and Wall of Reverence.

That's when a fun win condition occurred to me: Cradle of Vitality! Once I'd stabilized in the early game with Walls, I could get the Cradle up and running, piling tons of +1/+1 counters on my Walls over time. This would ensure they wouldn't die in combat, and Wall of Reverence would gain me more and more life. Eventually, I'd draw Wakestone Gargoyle (an oft-forgotten variation of Rolling Stones) and swing with my defenders. Alternately, Felidar Sovereign (a too-new-to-be-forgotten variation of Test of Endurance) could just win the game outright once my life total was 40 or more.

Originally I was excited to find a home for Peregrine Mask (to attach to my non-defender creatures like Kitchen Finks and Noble Hierarch), but I eventually swapped the Mask out for the exciting Mirrorweave (a card that I thought for sure would be a candidate inn Mark Rosewater's recent Fun-Off). In one game while testing, I was facing a hyperactive token deck, and used a ton of Walls to build to a stalemate. He decided to swarm me, and I cast Mirrorweave on Perimeter Captain. The resulting combat saw me gain 150 life off of Perimeter Captain triggers! Cradle of Vitality helped me add some +1/+1 counters to one of the Captains, which was revealed to be a Wakestone Gargoyle when the Mirroweave faded. Fun stuff!

4 Wall of Roots 4 Wall of Essence

The Memory's Not Over

The Selective Memory combos just keep coming! Here's an awesome email from Clint, who took the concept of the Beacon of Tomorrows + Selective Memory + Leveler deck and applied it to a recent card that I can't believe I missed. Take it away, Clint!

Wouldn't it be just dandy to be able to attack with a Blitz Hellion every turn? Sadly, the living Lava Axe finds it necessary to shuffle itself back into your library at the end of each turn. Of course, this is a problem; more likely than not, your library has other cards in it, so drawing the Hellion next turn is unlikely. This, of course, is unacceptable. Clearly we should be able to tap five lands and attack for seven in hasty, trampling damage each turn. The solution? Get rid of the rest of your library before you shuffle the hellion back in! A Mana Severance followed by a Selective Memory would work to this end. While this solution would give you a decent mana curve, it suffers a fatal flaw - it does not leave you a 10/10 construct. Also, Mana Severance is not sufficiently janky. Clearly, it would be a better option to use Master Transmuter or the like to put Leveler into play, followed by your Blitz Hellion.

All I have to say is ... very cool .... But wait! We have another kooky red/blue Selective Memory deck! Listen up to Abbott Veldhuizen, who created the cool Uyo, Silent Prophet + Cruel Ultimatum deck back in December 2009.

The library in Magic serves many purposes, but I would go out on a limb and say that its usual purpose is to draw cards. However, I am a Johnny, and I find this sheer conventionality boring! Conformity is for losers. You know what I like to do with my library? BRUTALLY SMASH MY OPPONENTS WITH IT.

Cast Selective Memory and take out everything but your two Autochthon Wurms (it is sometimes prudent to leave in an extra Undying Flames), then cast Undying Flames to hit the opponent for huge chunks of life at a time. Meanwhile, Trinket Mage and his back-up band, the Cogs, play control (along with Condescend); and Earthquake, Lightning Bolt, and Pyroclasm play midrange.

This is the obvious one, in case anyone was lost. The combo of Selective Memory + an Undying Flames-esque effect was everywhere except the Johnny column, so finally it's arrived here as well.