ello and welcome back to the Lab. It's Standard Week, which would seem to suggest that I'll "tackle" the format this week, aiming to wrench the top decks off the throne through rogue-deck-building antics. Well, you could have that mindset, I guess, but I fall on the low-key end of the competitive branch. I'd mostly like to highlight interactions that I found within this format, as always in the form of offbeat deck ideas. Some readers have emailed me some fascinating Standard lists in the past weeks (riding the tide of Magic 2013, no doubt), so I'll share those as well.

So, let's get to today's standardized docket.

Reader Ian Samuels sent me a deck legal in Standard that tickled my fancy. For starters, there were the twenty-three nonbasic lands that pieced together an entirely colorless mana base. Then the strategy: a diverse, many-angled artifact attack that focuses on either blowing up your opponent's board with Lux Cannon and Spine of Ish Sah, or going after his or her life total with Chalice of Life, that dexterous cup. The wily Trading Post glues the deck together, providing life, chump-blocking goats, and artifact synergy among its four options.

Shadows have of late tempted me. The portals of darkness that pool at all corner types: rooms, faces, buildings, bodies. Within them, nothing but the unknown, nothing but those things not known. The abrupt absence of light will extinguish all sight. No pre-notions can float in shadows. 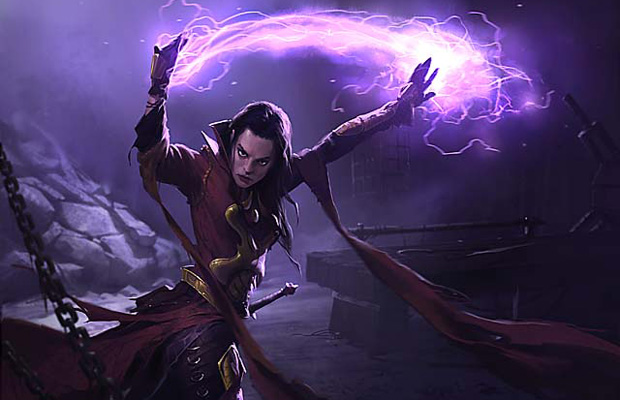 That wasn't an excerpt from the Book of Bolas, which must be read and analyzed by every Disciple of Bolas. Nope, just some silliness. But it did land me at Disciple of Bolas, which feels like a remarkably powerful bit of card draw to have a deck building go at. Especially with all the green-based power boosting within reach of Standard's boundaries.

Wolfir Silverheart has kept the collective eyebrow of Magic Nation raised since its release. Effectively an 8/8 for

, with no visible drawback and one visible drawforward (giving its soulbonded buddy a neighborly +4/+4 boost), it's a high end piece of green power. It also means four extra cards and life gained on the back of a Disciple of Bolas, whose bounty should always be satisfactory, considering the deck's other fatties.

Thragtusk is the other big one. Packing a thorny consonant-to-vowel ratio within its endearingly snappy name, this 5/3 comes in with 5 extra life and always leaves a 3/3 Beast behind. Imagine beating with a Thragtusk (perhaps with Silverheart support) and then sacrificing it to a Disciple to draw upwards of nine cards, gain 9 life, and get a 3/3 (or 7/7) Beast token!

Things really get out of control with Roaring Primadox also doing its thing. A suitably hefty 4/4 for four mana, the Primadox will force a bounce on you every upkeep, which could get downright ridiculous with either Disciple of Bolas or Thragtusk. Note that Thragtusk's Beast-making ability doesn't depend on its death, but its departure (temporary or not) from the battlefield. So an extra 5 life and a 3/3 each turn could be worth sinking five mana into.

Geralf's Messenger was a solid recruit for this deck, as it's a substantial threat at the three-drop slot, with 3 power and undying. Another powerful ally I made was Garruk Relentless. The bearded, cursed woodsman toolbox person can pull an array of helpful knobs, such as fighting off small threats, spawning Wolf tokens, tutoring for any creature in my library, and giving my troops the trampling edge.

I knew I'd need some quick spells to grow my mana and keep me alive, so full sets of Rampant Growth and Go for the Throat made the deck.

As I searched Standard for fitting inclusions, I kept stumbling into green and black cards that fit my strategy of having highly powered creatures. For a one-shot sorcery, Fungal Sprouting has a high ceiling for Saproling production, especially in a deck like this. Demonlord of Ashmouth is a hellishly metal card that I've had a reckless desire to use since its release, and it fits in here as an efficient beatstick that can feed on the aforementioned Saprolings (or some spare creatures). Lots of death should occur on both sides of the battlefield, which is why I added Entomber Exarchs to return my creatures to my hand and snipe the occasional noncreature spell from my opponent's grasp. Finally, the two story-laced Triumph enchantments from Avacyn Restored were the perfect deck icing.

4 Rampant Growth 4 Go for the Throat

I thought we had our Smaug two years ago, when Hoarding Dragon was released as a unique red artifact tutor. But Slumbering Dragon might just top its Hoarding friend. It's an interesting card from any viewpoint, being a flying 3/3 for

that can potentially attack for 8 or more! Of course, it all depends on whether your opponent will help you wake it up. Fortunately, it's possible to build a Slumbering Dragon deck with a built-in alarm clock constructed out of five +1/+1 counters. 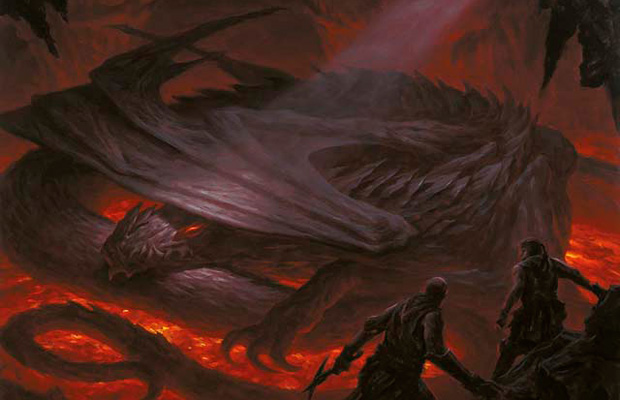 Slumbering Dragon piqued the interest of readers Tate and Caitlin Butler, who sent me their Standard take on it:

4 Hunger of the Howlpack 4 Reverberate

4 Ring of Kalonia 4 Blessings of Nature


Their letter contained a detailed account of how to pilot the deck:

Obviously you need to open with your primary threat, both before blue decks have the mana up to counter it and before red and black can toss out removal consistently. Assuming you're playing against red Humans decks sporting tons of fast creatures, they might be cocky and try to race you early—getting in for a few damage with a hasted unit; not very smart on their part to poke the bear. At this point your Dragon is already napping on one counter. More often they won't be so foolish as to come straight at you, so your Dragon will still just be a 3/3 as they try to build up their board before you come online. Worst-case scenario your Dragon gets burned out or removed somehow—though after the older sets roll over in October, this is much less likely.

At this point you're sitting pretty, but also at your weakest. You have some board presence outside of your snoring saurian—though realistically they probably won't be attacking you until they have a legitimate answer to your Dragon, or they think they can out-race you. For the sake of argument let's assume our enemy is more timid and still doesn't attack, just solidifying his/her board.

Again you toss your counter onto the Slumbering Dragon, setting it up with two counters—still not even half-way there, but now you have a set of chump blockers, at least something to build some redundancy on. The next turn is when you are most vulnerable. When your opposition is sporting three mana they have a swath of ways to neutralize your Dragon. If you can make it through this turn without losing your lizard, they're in your house of pain—if not, you have to reassess and either work on pumping up one of your two Humans or getting a Dragon back out and starting over again. Even in the worst case you have your chump blockers, so that's something—especially given how many counter-generation spells you have—even your 1/1s can bulk up to become huge threats. If the enemy swings in, you add counters—if not, you're ready to bring your Dragon online next turn anyhow. 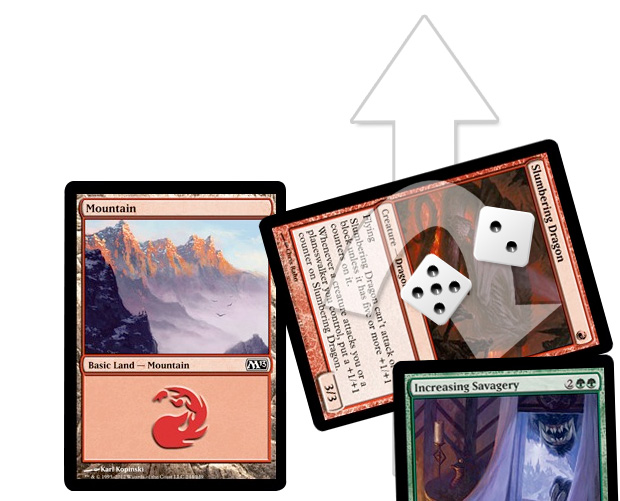 You want a Mountain here, if only so you have access to your Reverberate, assuming you want to dual-cast Howlpack or Blessings (miracled). Other than that you're throwing down hard with a 10/10 flier, even if they have a blocker, there's nothing that can really stop your caffeinated brute, and if they have no fliers or reaching creatures you just cleaved off half of their life-total. On the next turn you can continue to pump up that Dragon, lay down another and start on bringing up a second online just in case, or any combination of the two. If your enemy swings in with everything they have, hoping to intimidate you into an offensive, they better kill you in one go—if they don't your Dragon just swelled up even bigger, and you can just toss your trample ring onto him and rip through any defenses they might put up for lethal. Let's assume they stay defensive. 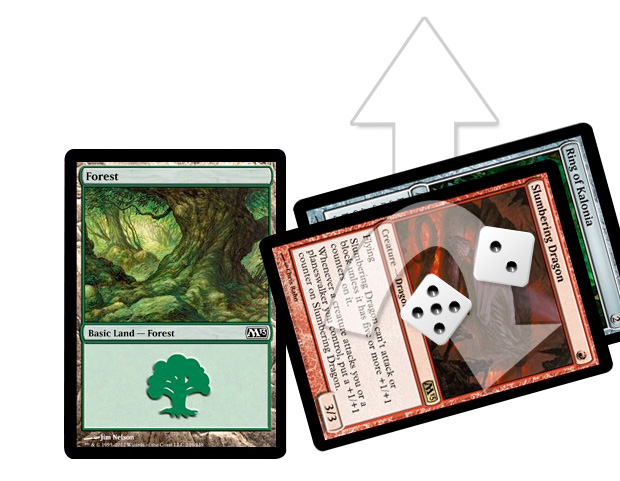 You basically win on turn five with this deck so long as you can toss down your Dragon turn one and follow it up with some combination of counter pumping—so long as you make your land drops up to turn four you can slam down your Increasing Savagery and bring your Dragon online. All-in-all I think this is a fantastic deck idea that combines some great Johnny synergy and Timmy strong-arm tactics.

That's all for this week... until next time.