elcome back to the laboratory, friends and comrades! Like the pun? I figured as I neared 50 columns (I think this one might actually mark 50) I'd reference an old column title. Or, there's the possibility that I couldn't think of any other "quest" puns. In any case, welcome and get ready for another exciting Zendikar preview! 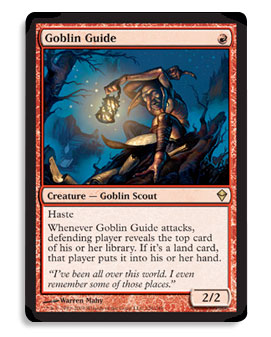 I know my excitement radar has been going off the charts because of some of these preview cards in the Visual Spoiler. Goblin Guide was a definite "What the frakkin' zounds?" moment as the first hasty 2/2 for one mana to see print. 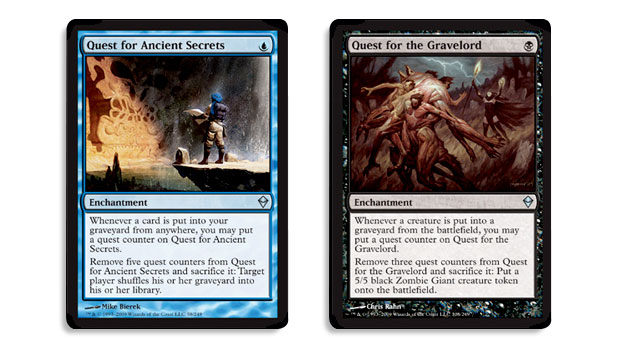 The landfall enchantments with a converted mana cost of one (Quest for Ancient Secrets, Quest for the Gravelord, etc.) are all but begging to be included in my bubbling casual lists, as are awesome utility creatures Gatekeeper of Malakir and Sphinx of Lost Truths. 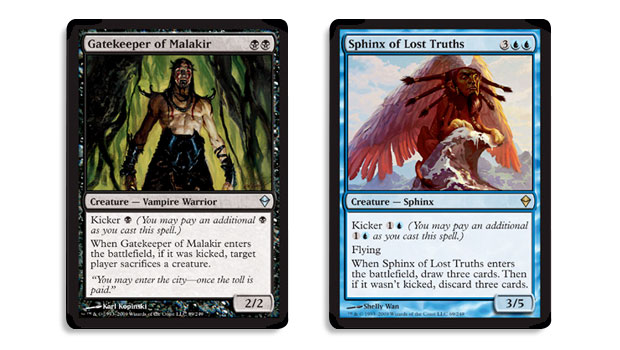 I can't wait to perform incredibly busted activities with Eternity Vessel and Roil Elemental (both of which have jaw-dropping pieces of great artwork). Finally, Archive Trap was a card that I've heard described as "the best mill card ever." It's also in Standard alongside Nemesis of Reason and Mind Funeral, so unless I'm right and I know nothing about tournament play, mill could be the new kill. Or not. 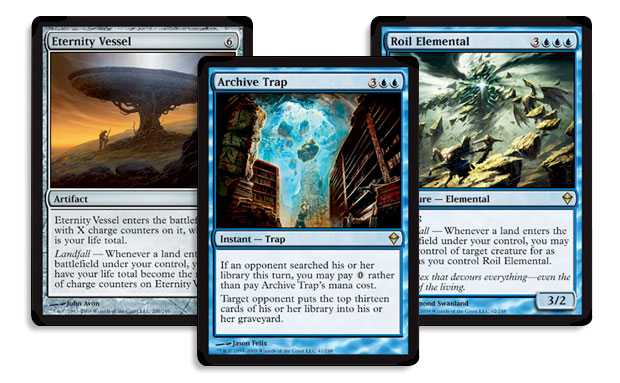 As for the last two themes of the set, I have a calculated excitement for Allies, and the "quest" cards are pretty interesting. They remind me a lot of the "verse counter" enchantments from Urza block. These cards requires a commitment of some sort (upkeeps) to build up verse counters and then unleash a giant, oh, Rumbling Crescendo.

These enchantments, however, acquire quest counters based on different commitments, and once you reach a certain number of them, you'll activate a certain effect. Soul Stair Expedition, for example, will gain the ability to double Disentomb, while Luminarch Ascension becomes an insane delayed Decree of Justice. 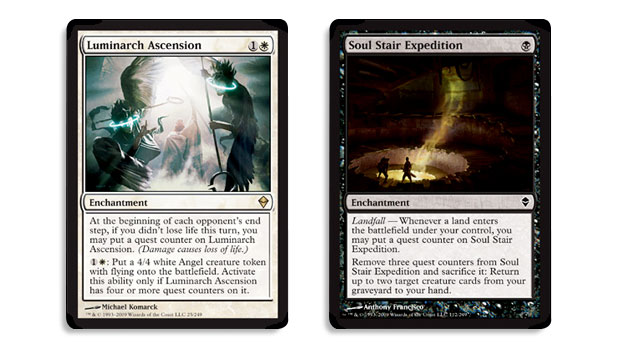 My preview card today is one of these quest counter cards. It, along with the

: 4/4 Angel token maker, hints at a five card cycle of rare Ascension quests. I wonder what color I'll get .... What else? Red.

How about that, eh? Here's a bit of a tip if the wall of text in that box overwhelmed you: Read it backwards (second ability first, first ability second.)

And because I know you all secretly have an undying love for walls of texts, here's another one: the FAQ entry for Pyromancer Ascension. I'd read it if I were you, as, like my Magic 2010 preview card Hive Mind, enchantments that deal with copying stuff are usually quite rules intensive. 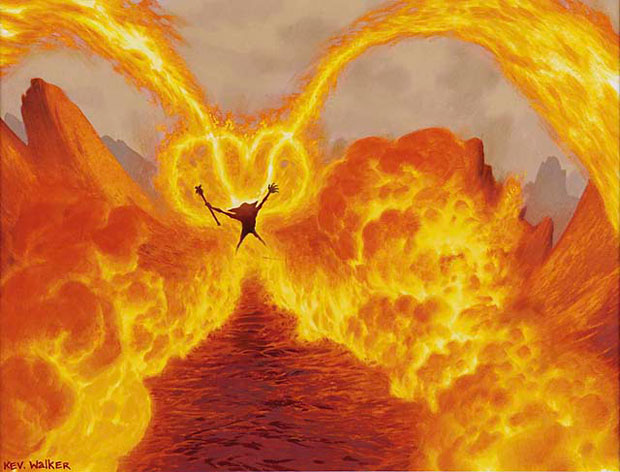 A free Twincast on each of your instants and sorceries sounds pretty amazing, but there are some obstacles to overcome before we basically planeswalk to a personal Izzet Steam Maze (minus the chaos ability.) And by "obstacles to overcome," I mean assembling those quest counters. Proactively playing a second copy of a spell is tough, but there are some cards that can help this process. (Note, just in case the FAQ wasn't clear enough on this or if you didn't read it: single spells with flashback and retrace will not count.)

Instants and sorceries with cycling: A good option. Cycle one, and play another. Hopefully you'll draw into another copy (unlikely, but possible), and even if you don't, drawing a card is always good. Some good choices here are Fiery Fall (early land fixing) or Slice and Dice (a Tremor here, an Earthquake there.)

Instants and sorceries with transmute: A pretty good option. Transmuting a Dimir Machinations for another one is a perfect way to set yourself up for a quest counter. Same for Muddle the Mixture, Dizzy Spell, Shred Memory, Brainspoil, and Perplex. Of all of these, Muddle and Shred can find Pyromancer Ascension, while Dimir Machinations is probably the best one to copy.

Instants and sorceries and that can find other instants and sorceries: A great option. My favorite one here is Mystical Teachings. Use one to find another (quest counter number one), use that one to find an instant (quest counter number two, activating Pyromancer Ascension), and then flash them all back for double the possible instants. Let's say you search something as simple as Magma Jet. Double Magma Jets with double scrying? I'm salivating. Other cards that fall into this category are the various tutors of the olden days, like Personal Tutor, Mystical Tutor, or even Vampiric Tutor. 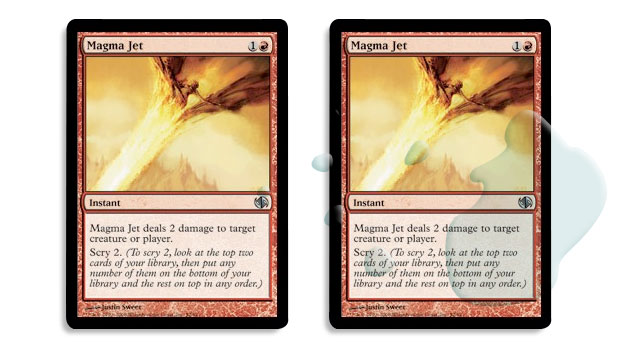 Other methods are everywhere. You could try chaining cards like Recollect or even Revive to stock up on quest counters. A method I really like is Quiet Speculation. Play the under-loved Judgment uncommon for something like three Lava Darts. If you had a turn 2 Ascension and played Speculation on Turn 3 with two Mountains in play, you could immediately sacrifice those lands to spread 2 damage out somewhere, and instantly have a fully charged Ascension. If you don't want to sacrifice lands, something cheap and copiable like Volcanic Spray or Think Twice would work just as well. 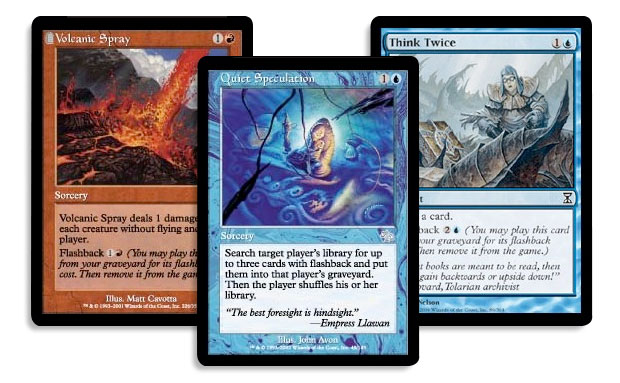 As for the perfect instants and sorceries to copy, anything will do, really. Since I'm partial to burn spells, anything like a Flame Javelin copied would settle my stomach. Hammer of Bogardan is a good one, as after you have both quest counters on Pyromancer Ascension, you can regrow the Hammer of Bogardan if you have run dry on spells. Nightmare Void is another post-quest recurrable sorcery that's fun to double. Plus, you could possibly dredge some instants and sorceries into your graveyard pre-quest. Some token making spells are fun too, such as Sosuke's Summons or Summon the School. A doubled Summon the School is great because you'll wind up with four Merfolk Wizard tokens right then and there, so you can recur it right then and there as well. 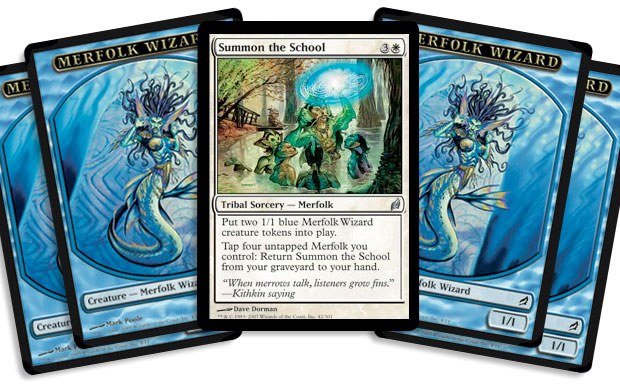 Back to the pure burn idea, though, the following opening was honestly the first thing I thought of upon seeing Pyromancer Ascension for the first time.

Sure, it's a bit of a reach, but we've now got both counters on the Ascension, and 10 damage has already been dealt somewhere. Follow that up with a turn-five doubled Lava Axe, and that could be the game.

However, there's one card that I haven't mentioned yet that flows perfectly with the straight up burn version of the Pyromancer Ascension deck. It's a fellow Zendikar card, and it fits seamlessly with my preview card. 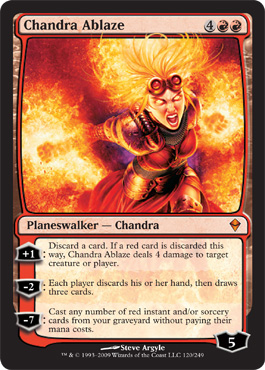 Think about it. Let's go through each of Chandra Ablaze's abilities, and I'll discuss why they are so perfect.

This is perfect for unloading instants or sorceries for free while still doing some damage. Imagine discarding a Fiery Temper to this ability! Best of all, this is only her +1 ability.

Free miniaturized Wheels of Fortune are pretty amazing in the first place, but when you are trying to get instants and sorceries in your graveyard, they're even better.

Whaaaaaaaaaaaaat. This is just perfect in a burn happy Pyromancer Ascension. First of all, you've been trying to get quest counters on it like mad, probably exhausting your resources in the process. Chandra's new ultimate lets you use all these resources once again. But wait! Now that Pyromancer Ascension is all powered up, you'll actually copy each and every one of these cards!

The following deck is built around these two insane Zendikar red cards, surrounded by a crazy wave of burn spells. There's also a lone Stuffy Doll, just in case your opponent doesn't have a creature out when a doubled Fiery Fall gets put on the stack. Ouch!


Tune in next week, won't you? I don't have a preview card, but I'll have a bunch of fun combos to sound off about! 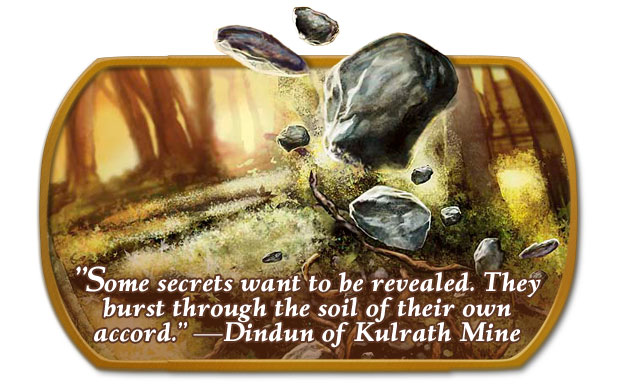