elcome, Laboratorians! It's time for Simic Week, and I've got a pair of awesome decks for you today. The Simic may be the most combo-loving guild in all of Ravnica, and I had no shortage of suitable cards to work with. The hard part was paring down all the fun ideas into two decks. (In fact, you might see a few more Simic-based decks in the coming months.) Eventually, I managed to create two beautiful feats of biomancy, thanks to some help from an old graftmage's notebook. 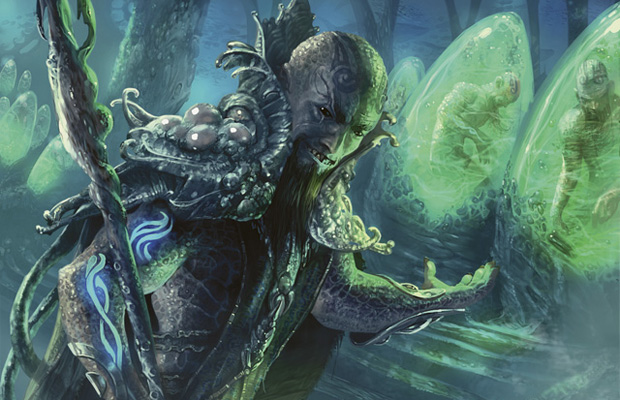 It's All About Me

Biovisionary is a Simic mastermind I can get behind. Creating a few clones of myself seems like a great idea. It might be handy to have several other handsome geniuses around the lab. Unfortunately, each of them would no doubt be as stubborn and egotistical as me.

Copying Biovisionary with cards like Clone is the obvious path to victory, but this is From the Lab. Why would you want to slowly churn out Biovisionarys when you can just turn all your existing creatures into copies of it? Infinite Reflection will turn one Biovisionary and three random dudes into four Biovisionarys. And then you win the game! Yay! You can also do this with Mirrorweave, but if your opponent has four or more creatures on the battlefield, you'll have to be a bit tricky. Casting Mirrorweave at the end of his or her second main phase will make all the Biovisionarys trigger during your opponent's end step. Since you're the non-active player, your triggers will go on the stack last and resolve first, so you get to win the game before your opponent does.

A tool from the old days of the Simic will help you protect the Biovisionary from your opponent's nasty tricks. Shielding Plax is... well, I'm not quite sure what it is, actually, but it stops your opponent from targeting the enchanted creature with removal, and it replaces itself to help make sure you have the pieces to finish the combo. Whatever this Plax stuff is, it's certainly useful. I must perform further studies.

We'll need some creatures to forcibly transform into Biovisionarys. Elves seem like a good choice. There are always a bunch of them around anyway. Llanowar Elves and Arbor Elf are cheap to cast and can give you a bit of extra mana as soon as turn two. Quirion Elves costs more mana, but it also fixes your colors, producing blue or green mana, depending on what you need at the time. We'll also toss in a few Augury Owls. They can help you dig for your combo pieces, and they can also be transformed easily enough. Just don't ask where the extra biomass comes from.

Just in case we can't find the Biovisionary, Boartusk Liege and Glen Elendra Liege can substitute, although admittedly attacking with a quartet of 9/10 Boartusk Lieges isn't quite as cool as putting four "You win the game" triggers on the stack. Mirrorweave also won't work particularly well with these creatures, unless your opponent has far fewer creatures than you.


You Say You Want an Evolution

For Simic Week, I couldn't resist coming back to one of my Gatecrash preview cards: Ooze Flux. Many people have noted Ooze Flux's awesome synergy with evolve, and what better deck for Simic Week than one taking their signature mechanic and cranking it up to eleven? 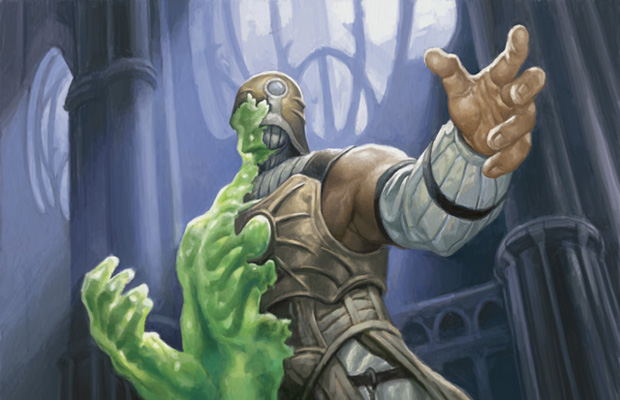 For those who aren't familiar with the combination, here's how it works: If you control a few evolve creatures with counters on them, you can remove some or all of their counters to make a token with Ooze Flux. As long as you had enough creatures, this token should be big enough to evolve them all, and you can remove the new counters for another Ooze, evolving them all again and so on. Thus, for every two mana you spend, Ooze Flux will make another token. Pretty good, but we're not quite at From the Lab levels of Johnnyness yet. The key to cranking this up a notch is Intruder Alarm. This enchantment has been a key piece in a very long line of infinite combos. Here, it allows you to untap all your creatures every time you make an Ooze token. If those creatures can tap to give you a total of two mana, you can repeat this as many times as you want, making an arbitrarily large army of Ooze tokens.

Fortunately, Gatecrash has given us the perfect creature for this. Gyre Sage not only gives you an evolve creature to use with Ooze Flux, it can tap for the two mana needed to activate it, provided you have two +1/+1 counters on it. Getting Gyre Sage up to 3/4 may not seem particularly easy in a deck with mostly evolve creatures, but the Simic have a little something to make things less difficult.

In the original Ravnica block, the Simic mechanic was graft. Creatures with graft enter the battlefield with +1/+1 counters on them, and whenever another creature enters the battlefield, you can choose to transfer one of those counters to the new creature. If you have two creatures with graft on the field, you can graft a counter from each of them onto your Gyre Sage, making it pre-loaded to produce the two mana you need.

Vigean Hydropon can not only graft counters onto your creatures, it's large enough to simply evolve all of them as well. That means that it doesn't matter if you cast it before or after the evolve creature; it can give it a counter either way. Plaxcaster Frogling is also reasonably large for its mana cost and has the added ability of being able to protect your creatures from removal, provided they have +1/+1 counters on them. The last graft card we'll be using is not from Ravnica at all. In fact, it's not even a creature. Llanowar Reborn was an interesting experiment from Future Sight. Although the +1/+1 counter won't do anything on the land unless it's turned into a creature by other means, you can still transfer it to any creature that enters the battlefield later.

Zameck Guildmage can use the counters from your evolve creature to help you dig for the combo, and Joraga Treespeaker gives you a backup option if you can't find a Gyre Sage. Throw in all the cheapest evolve creatures, and you've got yourself a deck.

It's time for a Simic-on-Simic battle in the arena. On one side, we have a genius of biomancy, a true visionary in his field. On the other, we have... a big pile of living Ooze. It's survival of the fittest today, and all mutations are allowed.

The Mirror played a land and passed, and the Flux used the guildmage to harvest the last two counters from the Hydropon, finally finding and casting Intruder Alarm. The Mirror played a land and passed the turn. Ooze Flux hit the board, but a Mirrorweave on Llanowar Elves delayed the combo. The Flux tried to go off again on the Mirror's upkeep, but the Mirror responded to Ooze Flux's ability with another Mirrorweave, holding off the combo for another turn. Unfortunately, the Mirror then drew a land and passed. The Flux cast a Plaxcaster Frogling to stock up on counters again, then made an arbitrarily large number of Ooze tokens, and although the Mirror found an Infinite Reflection for Boartusk Liege, the four 9/10s were no match for a few million 3/3s.

That's all the evolution for today, boys and girls, but be sure to visit the Lab again next week for another dose of crazy combo action. I'll be here, ready to help guide you on your Johnny Journey. See you then!