A Storm is Brewing

ello, Labbies! With the last two weeks having been focused on the excitement of Worlds Week and Magic's 20th anniversary, I feel like Magic 2014 has been lost in the shuffle a bit. Today, I'll be rectifying that by putting together a pair of decks based on some of my favorite cards in the set. The two decks also have something else in common. Both of them could be considered storm decks. Storm is perhaps the most broken mechanic in the history of Magic, and players have been taking advantage of that for years. Although M14 might not look like it has many storm enablers at a glance, you'd be surprised what you can do with a bit of ingenuity. 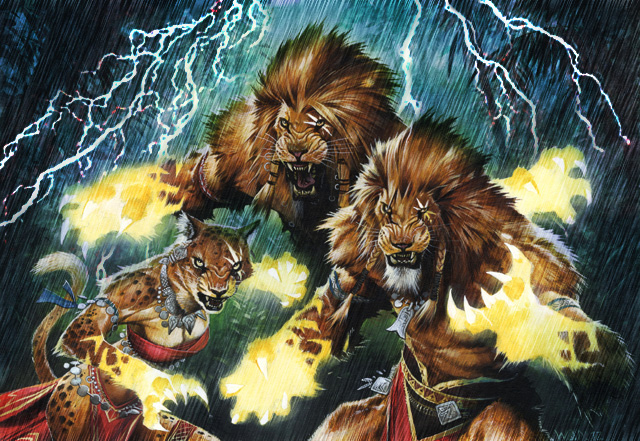 Cats in a Storm

Our first deck is technically a storm deck, since its primary win condition involves the mechanic, but the method by which you cast a large number of spells is drastically different from your average fare. After all, most storm decks don't use Cat tokens.

Ajani's Chosen is one of the most interesting cards in Magic 2014. There have been a number of cards over the years that trigger when you play an enchantment, but most of them have had the words "draw a card" attached. Ajani's Chosen is different. It gives you a creature every time you cast an enchantment, and if it's an Aura, you can attach it directly to your new token.

With the help of an enchantment like Rancor, you can get a new token every time one dies for just one green mana. So, if you're planning on going infinite with this, you need one of your creatures to die and one green mana on each iteration. Fortunately, Phyrexian Altar does exactly that. You can sacrifice a Cat token to the Altar for one green mana, then use that mana to cast Rancor again and make another token.

There are a huge number of ways to take advantage of an infinite number of enters-the-battlefield triggers, but I thought I'd do something a bit different this time. Since you're casting Rancor over and over again, you can finish up with a Tendrils of Agony, with a storm count of several million. That should be more than enough to finish off your opponent.

To help out Ajani's Chosen, I'll include Sigil of the Empty Throne. Like the Chosen, it produces a creature every time you cast Rancor. However, since it doesn't allow you to attach the enchantment to the token, you'll need another creature on the battlefield to get things started.

Birds of Paradise and Deathrite Shaman can help fulfill that requirement, while also giving you an extra mana of any color to help you cast your spells more quickly and easily. With Ajani's Chosen requiring two white mana and Tendrils of Agony requiring two black, the assistance is quite welcome.

You can also win the game without Tendrils of Agony if you have two copies in any combination of Ajani's Chosen and Sigil of the Empty Throne. You'll get an extra token each time you cast Rancor, leaving you with an infinitely large army. This does give your opponent one turn to do something about it, but without a sweeper or a way to kill you immediately, you'll win the game on your next turn.

Enlightened Tutor can search for most of the key pieces in the deck. It allows you to find Phyrexian Altar, Rancor, or Sigil of the Empty Throne for just one mana, although you do have to sacrifice your draw step as well. On the other end, Diabolic Tutor costs a hefty four mana, but allows you to search for any card in your deck and put it directly into your hand.

Swords to Plowshares is an easy way to disrupt your opponent without spending a ton of mana. This is one of the best removal spells ever printed, and the lifegain is completely irrelevant when you're planning on going infinite.

4 Rancor 4 Sigil of the Empty Throne

4 Sigil of the Empty Throne
36 Cards

Too Young for This

Young Pyromancer is a card most people have had their eye one. It promises a tremendous amount of value in the right deck, giving you free creatures all day long. However, there is one strategy that was brought to my attention recently which really seems like a lot of fun. Casting Beck with Young Pyromancer on the board means that for the rest of the turn, whenever you cast an instant or sorcery spell, you'll not only get an Elemental token, you'll draw a card as well. Tacking "draw a card" onto all your instants and sorceries seems like pretty much the greatest thing ever for a storm deck. Tossing this combo into any old storm deck seemed a bit too easy, though, so I decided to make this deck Standard-legal.

Now, there aren't any cards with storm in Standard, but there is a win condition that's perfect for taking advantage of this combo. Burn at the Stake allows you to tap seven creatures to deal 21 damage straight to your opponent's dome, and with Young Pyromancer making a new one every time you cast an instant or sorcery, getting seven creatures shouldn't be difficult at all.

Storm decks usually require spells that give you extra mana to keep things going, and this one is no different. Infernal Plunge turns into a true red Dark Ritual with Young Pyromancer on the board, giving you a new token to replace the one you sacrificed. However, even Dark Ritual pales in comparison to the power of Battle Hymn in this deck. With Young Pyromancer pumping out tokens left and right, Battle Hymn can produce huge amounts of mana. It even gives you a token itself before it resolves, tacking an extra mana onto the payout.

Past in Flames has shown up occasionally in storm decks in Modern and Legacy, and if it's good enough there, it's more than good enough for this deck. This is the card that really puts this deck over the top, allowing you to recast Battle Hymn for even more mana than it gave you the first time.

Faithless Looting is a powerful card-selection tool that helps you find the tools you need to start storming out. When you are going off, it also produces an Elemental and a card for just one mana, in addition to its normal benefits. Thanks to Past in Flames, discarding cards isn't all that bad either. If you have Past in Flames in your hand, you can freely discard Burn at the Stake, since you only need to cast that once.

Thought Scour isn't nearly as good as Faithless Looting here, but it does help you get things rolling by throwing some extra cards in your graveyard for flashback and giving you an Elemental token from Young Pyromancer.

Snapcaster Mage can serve as a miniature Past in Flames if you don't have one, or if you're still building up your mana. Despite the fact that it doesn't trigger Young Pyromancer, it still gives you an extra creature for Battle Hymn and draws you a card with Beck.

Elvish Visionary isn't very good when you're going off, but it's quite valuable if you're not ready to go just yet. It puts an extra creature on the board so that first Battle Hymn will be big, and it gives you a card to help you dig for more spells. It can also serve as a cheap blocker to soak up damage against aggressive decks.

4 Burn at the Stake

It's time to take things to the arena and pit these two decks against each other in a battle to the death. One deck plays like storm but isn't, and the other doesn't but is. Only one will prove victorious, and the other will be left to wallow in the dust. Let's get this party started.

Cats of Agony paid 2 life to play Overgrown Tomb untapped and cast Ajani's Chosen before passing the turn. PyroStorm flashed back the second Faithless Looting, discarding Past in Flames and a land before playing Steam Vents and ending the turn. Cats of Agony paid 2 life for Temple Garden and cast Sigil of the Empty Throne, and PyroStorm cast Young Pyromancer and played a land before passing back. The Cats cast another Sigil of the Empty Throne and passed the turn.

PyroStorm led with a Sulfur Falls, and Cats of Agony paid 2 life for a Temple Garden and cast Deathrite Shaman. PyroStorm played another Sulfur Falls and cast Faithless Looting, discarding Burn at the Stake and Elvish Visionary. Cats of Agony played an Overgrown Tomb untapped and cast Enlightened Tutor, searching up Phyrexian Altar.

PyroStorm cast two copies of Infernal Plunge, making six mana, then used two of it to help cast Past in Flames. After Young Pyromancer's trigger resolved but before Past in Flames did, two copies of Battle Hymn brought the mana count up to eleven. Cats of Agony sacrificed Birds of Paradise for black mana and used Deathrite Shaman to exile a Battle Hymn. The other Battle Hymn, however, made a seventh token and produced plenty of mana to cast Burn at the Stake.

If you like the idea of playing a storm deck in Standard, I encourage you to put this deck together, make your own tweaks, and try it out at your next FNM. It does a great job of preying on the slow midrange decks that allow you to pretty much do your own thing while they ramp up and cast good creatures.

Don't forget to join me again next week for more crazy decks and, until then, may your combos always come together. See ya!