wahahah! By entering my column this week, you have doomed yourself to be subject to my evil plans! These include, among other nefarious plots, three decks of Magic that are based around adversaries, foes, and other antagonists. And of course, what kind of so called Archenemy Week wouldn't have some discussion on the latest multiplayer format?

Archenemy will be released tomorrow, and I for one am excited. After the smash success of Planechase, I was pumped when I learned another unique multiplayer format was being developed. Last time, I covered an awesome game of Planechase that I played with some members of R&D. No such luck this time, but hopefully if I attend the Release Event, I'll have some fun stories for next week! 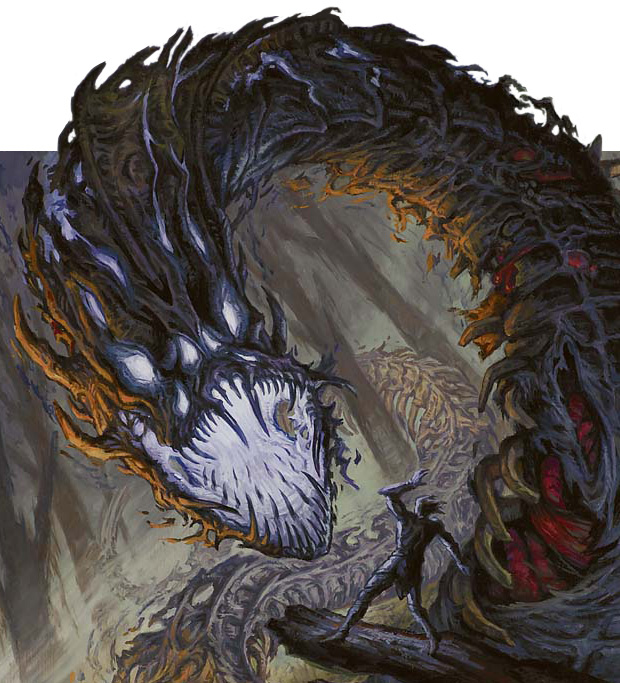 But back to my other focus for today: The concept of archenemies, or villains, if you will. I decided that this week I'd run through some of the antagonists of the modern storylines of Magic, and discuss some deck building opportunities.

Mirrodin premiered a while ago, but the plane of artifice contained one devious villain, Memnarch himself. 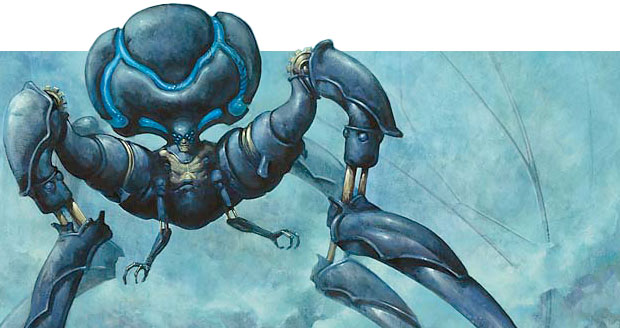 I loved Memnarch as a card when it was first revealed. In fact, as a creature with a repeatable activated ability, I freaked out upon reading it (as I did with Filigree Sages and Flamekin Spitfire.) Memnarch has not one, but two activated abilities, both sans

. In terms of deck building, Memnarch is often best used as a finisher in artifact styled decks that can generate lots of mana. Pump blue mana into him to slowly gain control of every permanent on the board.

As I've said before, the saga of Kamigawa is my favorite of all the Magic storylines. I love all the interesting characters, including the protagonists (Toshiro Umezawa, Michiko Konda, Truth Seeker) and the villains. Ultimately the mastermind behind the whole Kami War turns out to be the mischievous Mochi, the Kami of the Crescent Moon. (Konda, Lord of Eiganjo plays an antagonistic role as well, bringing That Which Was Taken into the physical world.) 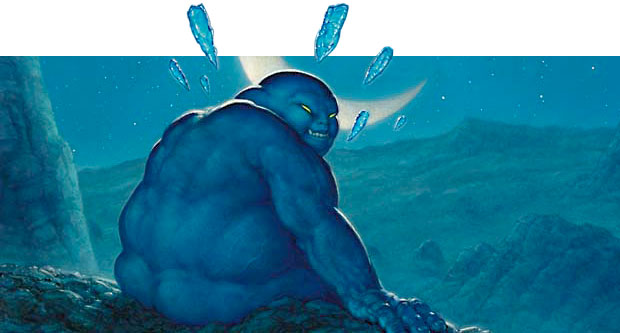 As a card, Kami of the Crescent Moon is a fairly simple creature, basically existing as a blue Howling Mine on legs. Nowadays, it seems like a solid card to include in a Runeflare Trap deck. Cerebral Vortex is a perfect contributor in these sorts of decks. Lore Broker is a manaless way to make your opponent draw as well.

Ravnica, being a city made up of ten guilds, has various characters wheeling and/or dealing to be named Chief Villain. Szadek, Lord of Secrets and Momir Vig, Simic Visionary had plans of their own to thwart the Guildpact and take control of Ravnica, but I'd have to mark Grand Arbiter Augustin IV as the overseer of it all. From tricking Argus Kos into breaking the Guildpact to enslaving Szadek, Lord of Secrets's ghost to being involved in the Ghost Quarter, the Azorius ringleader is the main adversary.

As a card, Augustin works well with other white and blue spells that you play, while acting as a Sphere of Resistance type of card to your opponents. I thought I'd take advantage of this by using the white and blue cards from Shadowmoor and the sets of Alara to cast spells on the cheap while slowly smothering your opponent. Thistledown Duo costs only

with the Grand Arbiter Augustin IV on the board, and it should get in for some damage early on. Swans of Bryn Argoll is an unkillable 4/3 flyer for

. Messenger Falcons is a flying 2/2 that draws you a card for

. Talon Trooper and Ordered Migration are other white and blue spells that are efficient and have to do with Birds. The secret last ingredient is a copy of Kangee, Aerie Keeper to pump up all your Birds for 2 less than normal!


There's a toolbox of white and blue instants to Demand whenever possible. Wall of Denial can slow your opponent's progress. Swans can be dangerous, as your opponent could wind up drawing a bunch of cards off of it, but remember that Augustin is upping the cost of his or her spells anyway. With luck, your efficient beaters can swoop in to save the day.

From here, Nicol Bolas pretty much takes over. He's basically been the archvillain of every block from Time Spiral onward (except the next section's.) He's the biggest and the baddest. Such a scoundrel is Bolas that he is represented with two different cards, the titular Nicol Bolas and the Nicol Bolas, Planeswalker. Both cards are ridiculous for various reasons, but I won't build with him today. Instead, check out my article for last year's Nicol Bolas Week, in which the terrifying Dragon crushes my television and eats my cheesecake.

The dual worlds of Lorwyn and Shadowmoor fold into each other in a process called the Great Aurora. The main adversary of these worlds is Oona, Queen of the Fae. With her abilities of altering the day and night of the two worlds, she was a target for the heroes of the storyline, Rhys and Maralen. 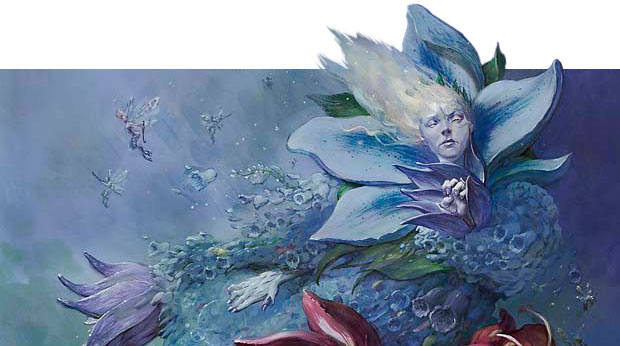 Oona is yet another eyeball-exploding card with a cool activated ability. Simultaneously milling and making Faerie tokens? Sounds great to me. Like Memnarch, deck building possibilities for Oona aren't exactly endless, but it's a great finisher in decks that could support her. Painter's Servant can guarantee a ton of Faerie tokens, however, so there's a good place to start.

The Eldrazi probably qualify as the villains of the Zendikar story. They're big, powerful, and unstoppable. I'd thought all the Johnny-tastic combos with the Eldrazi were depleted, but I found some more inspiration starting with one of the archenemies of old, Volrath the Fallen. Hailing from Nemesis (itself a synonym for archenemy), Volrath the Fallen has the cool ability to discard creature cards to pump itself up. Obviously, the larger the discarded creature card, the better. 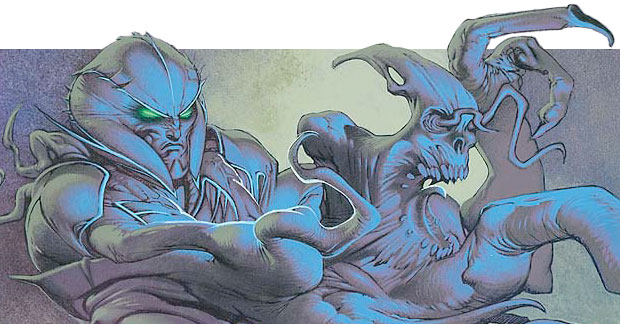 Imagine discarding Emrakul, the Aeons Torn to Volrath. The Eldrazi will shuffle itself back into your library, while you have a 21/19 attacker at the ready. To make sure it has a safe route to your opponent, why not discard Wonder as well? Spending

and discarding Wonder and Koziliek, Butcher of Truth will leave you with a 20/18 flyer. Oddly enough, Filth also works in this position, assuming you have Urborg, Tomb of Yawgmoth on the battlefield. 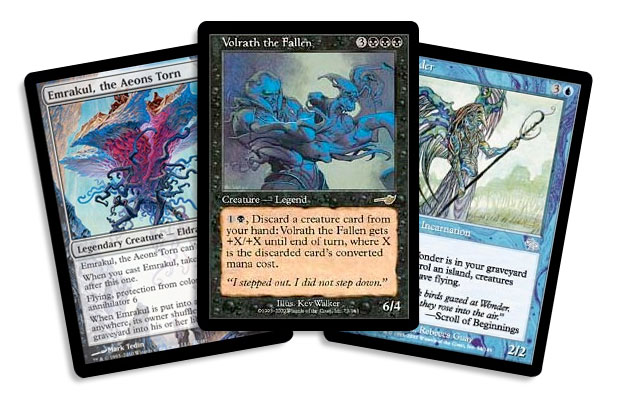 more to attack with your 9/9, what this really accomplishes is loading your hand with 9 costing fatties to either pop onto the battlefield with the Doppelganger or discard to Volrath. Such fatties include Kuro, Pitlord (perfect for the Doppelganger, as you avoid the upkeep payment and still get to swing and kill other creatures), Inkwell Leviathan, and Artisan of Kozilek (perfect in this deck, as you can cast it later on to return the discarded and/or sacrificed creatures to play.)


Shriekmaw fulfills creature killing duties while being an expensive creature for Volrath the Fallen. I thought Enclave Cryptologist would be a fine fit here, as an early Looter and later on, a hand stocker. Coalition Relic and Dreadship Reef can ramp up to high levels of mana, to either pump into Volrath or to cast an Eldrazi or another fatty. There are various ways to modify this deck, such as more card draw, or cutting the Doppelganger for some straight up reanimation.

Okay, now that we're through talking of Magic's various villains, let's get to the part where you become the archenemy of the table! In my article during Planechase Week I picked one of the pre-built planar decks and built a new 60-card deck around the 10 plane cards. I thought I was going to do the same thing here, with the pre-set scheme cards. However, I decided to shake it up a bit and build my own scheme deck first. 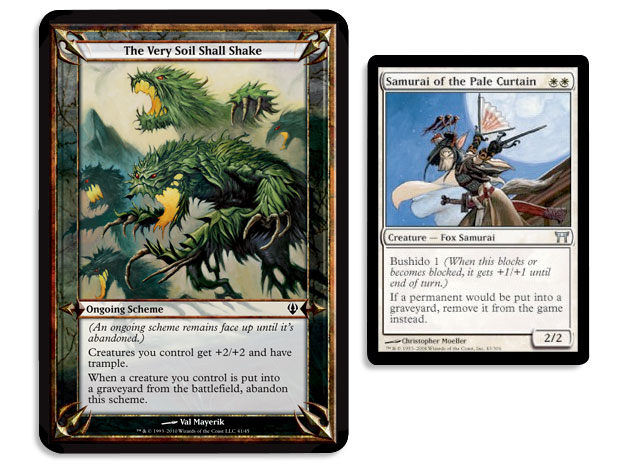 I love the concept of schemes, but it's the ongoing schemes that really interest me. If you could ensure that your ongoing scheme would never be abandoned, you'd basically have an untouchable bonus of some kind. Take The Very Soil Shall Shake for example. Having all your creatures +2/+2 and trample is a great bonus, and unlike an enchantment, ongoing schemes can't be Disenchanted or Demystify or touched in anyway. The only way it'll go away is if one of your creatures hits the graveyard. But if you have Samurai of the Pale Curtain in play ... then it's a permanent scheme! 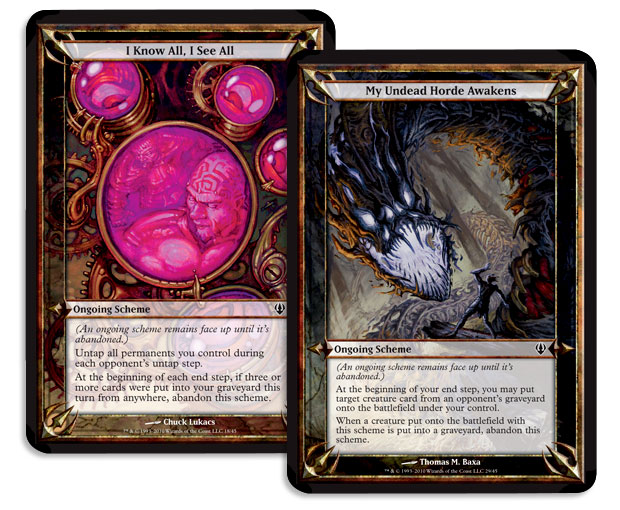 Luckily, other ongoing schemes have the same abandonment trigger. I Know All, I See All won't be abandoned if you have the Samurai in play (unless you cast a lot of instants or sorceries) and you'll have a permanent Seedborn Muse effect. My Undead Horde Awakens becomes a permanent Debtors' Knell without fear of abandonment. Of course, Samurai of the Pale Curtain prevents permanents from going to the graveyard ... but not cards directly from a hand or library. If you manage to mill some creatures for example, My Undead Horde Awakens can benefit. 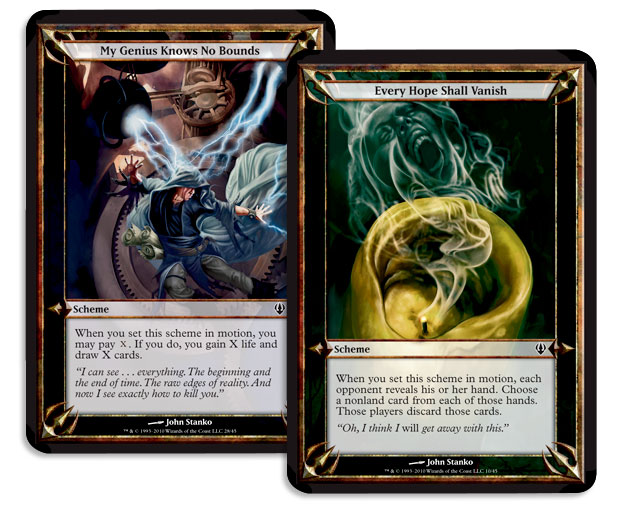 To fill out the rest of my scheme deck (which needs to be a minimum of ten cards, up to two of any scheme) I went with one of each of the scheme cards that appears in every scheme deck. I also put in some scheme cards of my own choosing: Roots of All Evil (free creatures,) Every Hope Shall Vanish (discard,) and My Genius Knows No Bounds and Every Last Vestige Shall Rot (fun cards in general.)

So we're looking at a creature-heavy white-blue milling deck that likes to untap its stuff every upkeep. Hello, Ambassador Laquatus! Drowner of Secrets ushers in the Merfolk theme. Summon the School won't cut it when graveyards aren't around, so I'll go with Stonybrook Schoolmaster and Judge of Currents.

1 Oona, Queen of the Fae


I didn't want to take too much of an advantage of my starting 40 life, but I couldn't resist adding Rune-Tail, Kitsune Ascendant Kitsune Ascendant. It'll flip instantly and protect your Merfolk from harm.

That's it, see you next week!