Is There A Window Open?

ello, and welcome to Draft Week here in the Lab! Initially, I was stumped on how to approach this week, as usually I leave the discussions of drafting to Steve Sadin, the resident Limited pro on magicthegathering.com.

I had a quick brainwave to some of the most famous columns in this article's history, which would be the hilarious tales of that quirky draft format, Reject Rare Draft. Former Johnny psychopath (and current Rules Psychopath) Mark Gottlieb wrote up three entertaining tales of this classic way to monkey around with forgotten rares. His excellent successor Chris Millar (who by the way, wrote a fantastic feature article recently ... go check it out! Now.) continued the tradition in an article that definitely gave Yukora, the Prisoner a new reputation.

I wondered if I should continue the tradition, but ultimately I decided I wanted to create a draft-oriented format of my own. Here are my experimental results, embracing the spirit of Johnny creativity.

This format starts off in familiar territory, but it requires some background knowledge on the Pack Wars format. Super-editor (and R&D design moonlighter) Kelly Digges wrote a fun piece on Pack Wars back when Eventide was all the hot new rage (unlike now, when it's the cold old peace ... or not).

Here's an unofficial synopsis of this format. Basically you open up a booster pack, without looking at it, and use it as your deck. You also shuffle some number of lands of each basic land type, usually three, into your budding deck, and play! It's a great format, but here's my draft-hinged spin-off on it. 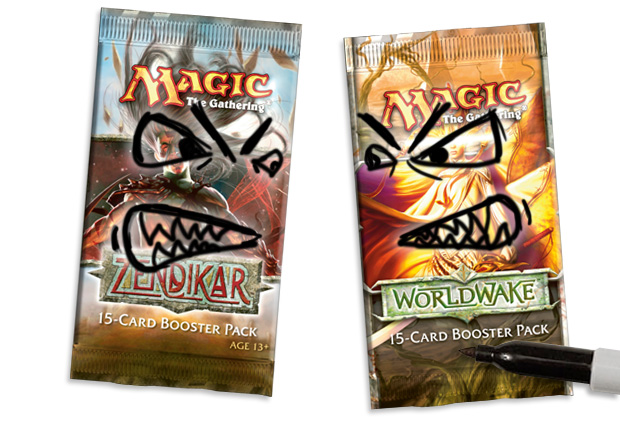 Before you begin play, open another booster pack (preferably of the same set that you are using in Pack Wars, but I guess variety never hurt anyone!) and spread the fifteen cards out, face up. Then begin play, with the following rule in place:

If you would draw a card, you may instead skip that draw. If you do, choose a card from the booster pack and "draft" it onto the top of your library.

I considered letting the "drafted" card go right into the player's hand, but ultimately I decided to place it on top of the player's library. The other way would probably result in no one drawing their real deck in an effort to snag the bombiest cards first. With the official rule in place, though, you'll have to sacrifice some card advantage to acquire that Goliath Sphinx. 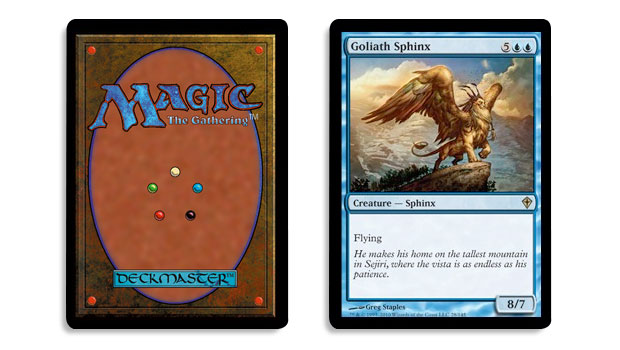 In my experience, Pack Wars can be a bit hard to play, seeing as your deck is automatically all five colors. Getting shafted on one color can happen often. Thus, this format will force you to draft efficiently. "Yeah, I could grab that Leatherback Baloth, but I only have one Forest right now. I'll play it safe and draft Snapping Creeper instead." And if you get mana screwed, you can even go for the one land in the pack!

I bought some boosters of Zendikar and Worldwake and sat down to play with my friend Wes, spreading out a Worldwake pack before play.

I opened with a Forest, while Wes opted to draw from his regular deck first, and played a Mountain. I did the same, and rejoiced when I drew an Island. This allowed me to both play Spreading Seas on the Mountain opposite me and draft a card at the same time. I drafted the spectacular Voyager Drake and placed it on top of my library.

Wes decided to draft this time, and decided on a Hada Freeblade. His reason for this became clear when he played a Plains and an Ondu Cleric. Uh-oh. I drew the Drake and played a Swamp, which sadly didn't free up my Boros-tinted hand. I went with a desperation Trapfinder's Trick, which not only got zero Traps, but revealed an Umara Raptor in Wes's hand. Double uh-oh. 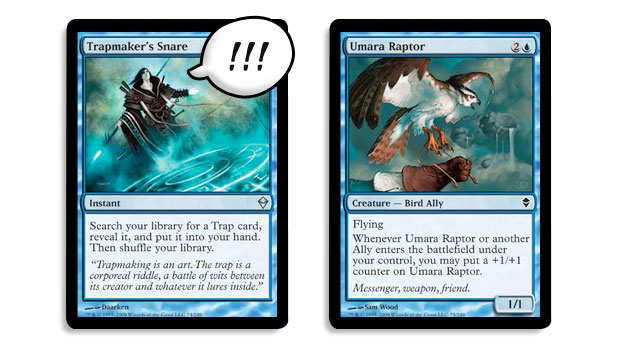 Wes drew Hada Freeblade and cast Umara Raptor, gaining some life. This godlike draw was threatening to put me away! I topdecked a land and cast the Voyager Drake, but quickly fell behind again as Wes began his turn by drafting Twitch to the top of his deck. Who would have thought Twitch could ever be potentially devastating? The Freeblade came down atop another Plains, and the team of Allies swung in. I tried to trade 3/3 flyers, but was crushed by some Bold Defense! I mounted a pathetic amount of defense of my own, but by the time I'd stabilized, Wes had gotten to draft and draw the rare of the pack, Marshal's Anthem, which solidified my doom. 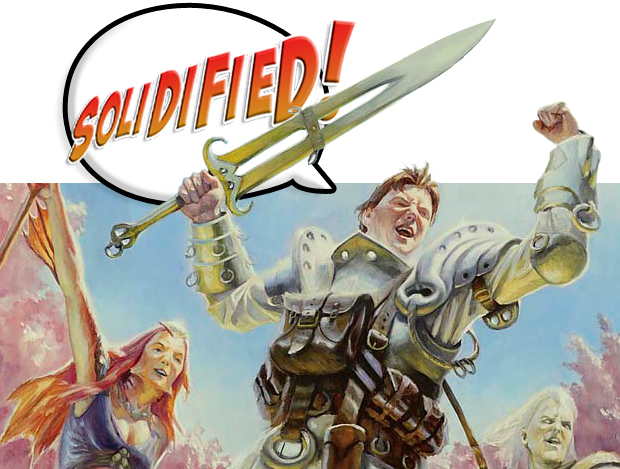 This was fun, but a bit slow. Here was my second attempt at this format. Instead of the above rule, we went with these two:

If you would draw a card, you may instead skip that draw. If you do, choose a card from the booster pack and "draft it into your hand.

You cannot "draft" a card twice in a row.

This meant, in theory that the games would go quicker, but still wouldn't unfairly break the rule in favor of drafting rather than drawing.

We opened the packs and laid out the Worldwake one. I began with a Swamp. Wes seemed eager to draft first and picked a foil Loam Lion. Yikes. He cast it, and I dearly hoped he didn't have the follow-up Forest next turn. Since I had no two-drop play, I decided to draft the rare, Creeping Tar Pit, and play it. Why not? 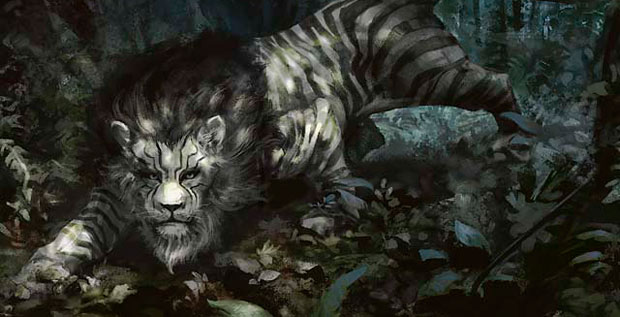 Thankfully, there was not a follow-up Forest nor a two-drop from Wes, who couldn't draft this turn. After getting smacked for 1 by the Lion, I drew Reckless Scholar. "Oh yeah!" I exclaimed. I tapped my Tar Pit for blue mana and cast the Scholar, which could swing the game in my favor. Unfortunately, Wes's third turn consisted of playing a Forest and a Kor Hookmaster, costing me an extra draft/draw off the Scholar. He had also drafted Feral Contest, which meant bad news unless I could off his creatures or play a bigger one.

I had a better trick, though. Wes had overlooked the Veteran's Reflexes in the Worldwake pack, and I drafted it and played a Plains. Wes cast the Contest, and I cast the Reflexes in response and immediately tapped the Scholar to draw. This cost me some life due to beats from the Lion and Hookmaster, but thanks to the Scholar I was able to draft again next turn, and a landfallen Rest for the Weary replenished my life total. 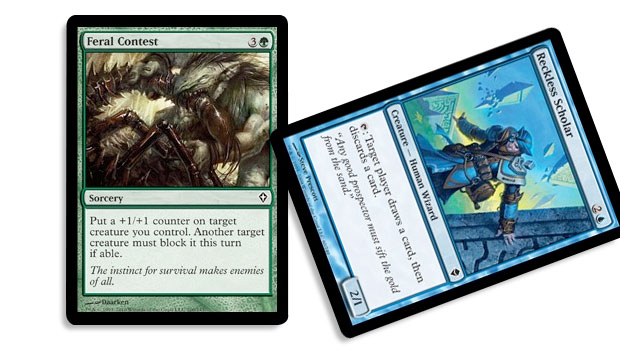 Later in the game my Creeping Tar Pit pick came up big, dealing tons of damage while I held the fort down with Molten Ravager and a timely Dead Reckoning, which returned Reckless Scholar (dead from combat) and killed Kor Hookmaster. Wes was generally winning the combat game with Bestial Menace and a key Shieldmate's Blessing. The pivotal play occurred when my Mire Blight (sitting on Wes's 3/3 Elephant token) was offed by a kicked Kor Sanctifiers from Wes. I sprung my Cobra Trap (which was sitting dead in my hand all game), and that was the match.

This was a really fun way to play Pack Wars while incorporating drafting into the game. I personally think that even better results would come from drafting a different block, as Zendikar and Worldwake were generally land-heavy packs (not surprising from the land block!) I'd love to use Shards of Alara Block in this way, and as always, mixing packs from different blocks is always fun. It's always been a weird dream of mine to be playing in an epic, multiple-set-draft, open an Unhinged pack, and pick Symbol Status.

There are exactly three cards in all of Magic with the word "draft" in their flavor text. (Okay, so in each instance it was part of the word "updraft," but hey. Would you rather I built around Downdraft?) As fate would have it, these three cards span just two colors, and inspire a creative deck. These cards are Esper Stormblade, Horizon Drake, and Commander Eesha. 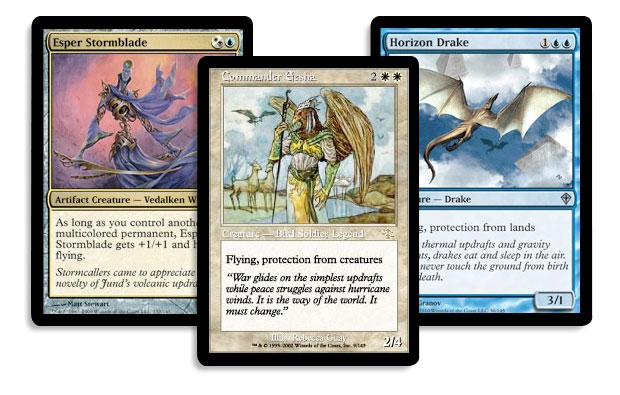 I thought it was also interesting that there were two different instances of protection among these creatures. To that end, I decided to make a protection-based Concerted Effort deck! Luckily, we have one for every card type. Horizon Drake covers lands, and Commander Eesha and Beloved Chaplain cover creatures. Devoted Caretaker can guard against instants and sorceries (and you can activate it with the Concerted Effort trigger on the stack). Azorius First-Wing (in our colors!) repels enchantments, and Angelic Curator protects against artifacts. Finally, Mirror Golem (a hugely underrated card in general) can gain protection from planeswalkers and tribal, as long as one of those types gets into a graveyard, or it can fill in for any of the others.

Deft Duelist is an on-color beater that is multicolored (for Esper Stormblade) and has vigilance to add to the Effort (although sadly, the Ravnica-era card won't spread the shroud around). Add some white and blue tribal spells and easy to drain planeswalkers, and we have ourselves a deck.