ey gang, and welcome back to my laboratory. This time last year, I was all pumped for Halloween, which is approaching fast and full steam ahead. Last year, Grixis Week was the creepy Magic tie-in theme of choice, and I appropriately decked out my laboratory with scary haunted house props to celebrate the holiday.

This week brings with in another scary theme related to both Halloween and the latest in Magic news: Vampires. Zendikar, the latest plane to spring up in the Multiverse, contains many of these bat-laced, blood-craving, and fearsomely fanged monsters. I noted the interesting middle section in the Venn diagram of my two Halloween theme weeks (Blood Tyrant, being both a Vampire and a member of Grixis) before popping Nosferatu into the DVD player to brush up on my vampiric knowledge.

Speaking of Vampires, before we dive into three Johnnylicious new ones that Zendikar unleashed on the casual public, I'd like to take some time to warmly thank those who emailed me in response to last week's look at the blue and black Ascensions. I received many potential ideas for a competitive Standard deck based around Bloodchief Ascension (which is all about embracing your inner Vampire). These ideas mostly paired red with the black (which I can get behind), and out of all of them, I'd like to quickly name drop David Disorder, whose deck used hasty Bloodghasts and targeted Sign in Bloods alongside Volcanic Fallouts to ramp up quest counters and Liliana Vess as a catchall solution.

Archmage Ascension got some email love as well. Here's a fun reanimation decklist sent to me by Jacob McCullar, who calls the blue enchantment the "Holy Grail of reanimator solutions." He cited its ability to slide into a draw heavy deck and later tutor for either a fatty or a Makeshift Mannequin.

4 Mulldrifter 1 Magus of the Jar 3 Torrent of Souls

The list could probably be toyed with, but alas! We have Vampires to attend to! Let's enter Count Orlok's castle, shall we?

Fun with the Blade

While looking through the various Vampire-related cards in Zendikar, I came across some that weren't actually Vampires, but were very much within the context of the tribe. Mindless Null was the first one I encountered back in my look at the commons of Zendikar, but as that card isn't too exciting, I moved on to some others. 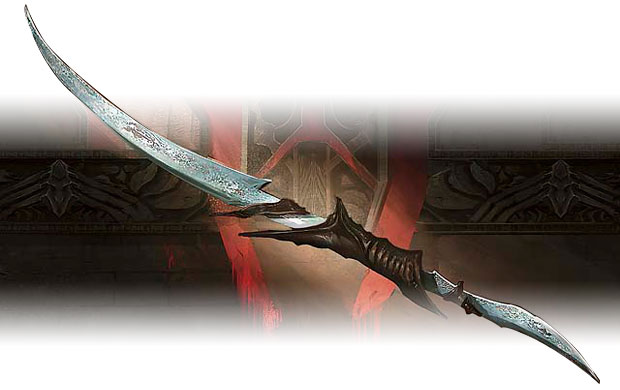 Blade of the Bloodchief struck me as a potentially broken card that liked to be attached to Vampires, immediately qualifying it for column material. There are a lot of busted things I can do with this thin but deadly sword.

In a great email, Steffen Hagen (architect of the fun Hedron Crab mill deck featured not more than two weeks ago) notified me of the equally fun things that could be done with the Blade. The following was his first idea composed into a deck list.

4 Goblin Sledder 4 Blade of the Bloodchief

As you can see, this deck is all about landing a Vampire Aristocrat and munching on lots of tasty Goblins. Having a Blade of the Bloodchief is key for extra Vampire pumpage, but it could easily be attached to a Weirding Shaman as it cycles and recycles Goblin tokens.

Steffen had other ideas in his head as ways to improve the deck. "The deck can be tweaked in a number of ways – more Vampires (Vampire Nighthawk, Taurean Mauler (!)) or sicker Goblins (Siege-Gang Commander, Warren Instigator, both of which are pretty mean with the blade.)"

I have some ideas of my own for this particular base of cards. With a Blade of the Bloodchief, Deathbringer Thoctar seems unreal as it offs some of your own Goblin tokens, double-pumping itself in the process. Ulasht, the Hate Seed adds another color to the mix, but with assuredly fine results. You can off your own Saprolings, or just create a mass of them. Steffen also seems to think green could be a possible addition: "Doubling Season and Saproling Burst could work well."

As great as this idea and deck list is, I liked another combo that Steffen brought up even better. In his words: "Blade of the Bloodchief + Triskelavus (

: deal 1 to any target), which goes infinite with Ashnod's Altar."

This naturally led me to explore the various interactions with Constructs of all shapes and sizes. Triskelavus is obviously the best of the lot, but what of its ancestral artifact creatures? I would certainly love to equip Blade of the Bloodchief to either Pentavus or Triskelion. Mindless Automaton could make use of those +1/+1 counters for drawing into your deck, and Arcbound Reclaimer could, well, reclaim any spent artifact creature to ensure you'd never run out of steam.

A pair of blue two-drops helps this budding list out immensely. Amoeboid Changeling can transform your various Constructs into Vampires, while Vedalken Engineer can accelerate you into the late game. I subbed Krark Clan Ironworks in for Ashnod's Altar to keep things Extended legal. Finally, I thought Skill Borrower would be a good one-of, because if you can manage to stick a +1/+1 counter or two on it with a Blade of the Bloodchief, you can potentially do anything! 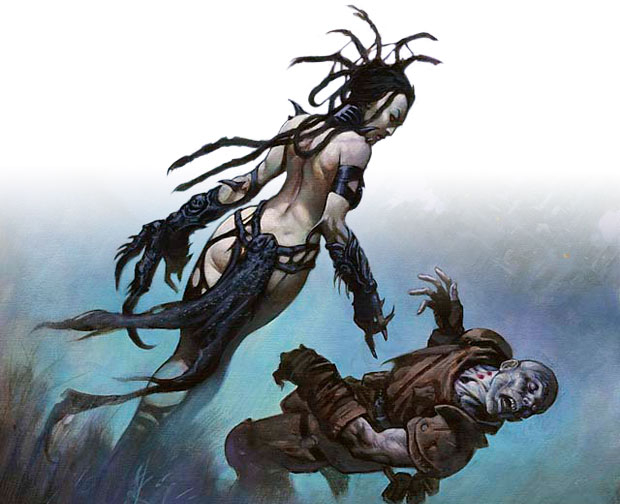 Yet another reader email sparked this deck section. This one came from Christopher, who wrote:

"I don't know how down your alley this is, but a combo that has started to amuse me is Sanguine Bond + Blood Tribute. It's a neat little "I Win" combo (when the Tribute is kicked) that few players seem to see coming."

Don't worry, Chris. This kind of vampiric Johnnyness is definitely down my alley on Vampire Week. For those a bit lost, here's the skinny: Have an untapped Vampire in play and Sanguine Bond alongside it as you cast Blood Tribute. Go ahead and kick it. Once you gain the life, Sanguine Bond will drain your opponent for that much. Conveniently, "that much" will be exactly the rest of his or her life total.

I decided to place this combo in a Vampire tribal deck for Standard. To that end, I looked far and wide for other Vampires that could gain life to trigger the Bond. Child of Night effectively gains double strike with a Bond on the table, as does Vampire Nighthawk. A flying, lifelinking, deathtouching, pseudo–double striker for three mana? Sign me up (in Blood)!

Another card similar to the Bloodwitch is Feast of Blood. This excitingly powerful removal spell (complete with fear-inducing artwork) will only work if you control some Vampires to begin with, but once you do, you can potentially suck 4 life from your opponent (thanks to the Bond) while killing a problem creature like Baneslayer Angel.

I filled the rest of the deck in with some good Vampires and life gainers. Vampire's Bite fits both bills and is kind of black's answer to Reckless Charge. Guul Draz Vampire will turn on once your opponent has been drained down to 10, which a Blood Tribute can do on its own. Gatekeeper of Malakir, meanwhile, is an excellent creature to play in any mono-black deck, not just a Vampire tribal deck. 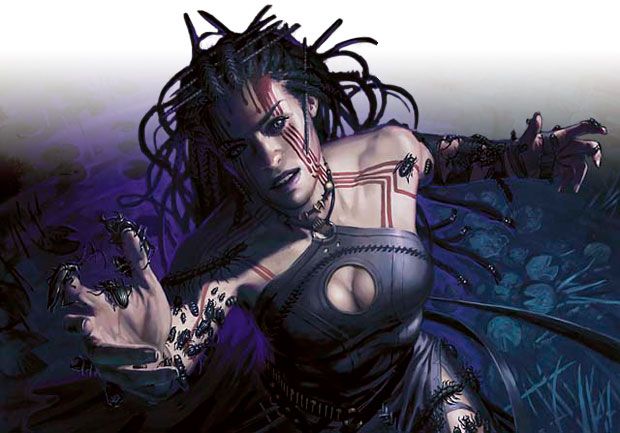 I was all set to write a sweet section about Vampire Hexmage for this column. It was going to be great, because I was going to blow the door off of the completely diabolical and original interaction Dark Depths. With this amazing combo, one could potentially have a turn-two 20/20 Marit Lage token on the battlefield. (Turn one: Dark Depths. Turn two: Urborg, Tomb of Yawgmoth, or Swamp + Chrome Mox removing a black card, Vampire Hexmage, sacrifice it immediately targeting Dark Depths.)

This section would also contain some cards with painful varieties of counters, such as -1/-1 counters or age counters. Noxious Hatchling could easily be a turn-four 6/6 wither guy, while Woolly Razorback could get those ice counters hexed away and emerge as a turn-four 7/7. Staying in color for the cumulative upkeep cards, Phyrexian Etchings loses a lot of its bite with a Hexmage keeping it in check. Krovikan Whispers does as well, becoming more or less an undercosted Mind Control. Finally, Aboroth could potentially be cleansed of both its age and -1/-1 counters in one fell swoop of the Hexmage. 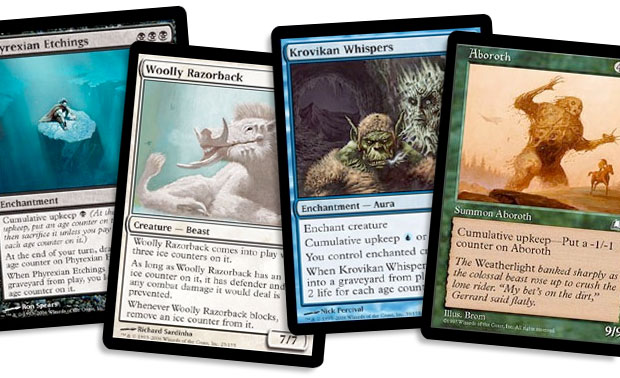 Good thing these combos haven't been officially talked about yet. I really didn't have much to worry about. I mean it's not like Dark Depths will suddenly rise to become an elite tournament strategy in Extended or anything. It's equally unlikely that the age counter synergies would be spoiled in a Card of the Day blurb or Serious Fun article. That would never happen, right?

Oh, wait. All that stuff actually did happen. Well, if you're curious about potential Vampire Hexmage decklists, the above paragraphs pretty much outline what a deck list might look like.

Instead, I'm going to talk about Kalitas, Bloodchief of Ghet. This mythic rare legendary Vampire Warrior bloodchief is definitely a bomby creature-killing machine. But wait—he also transforms his victims into loyal Vampires! What a guy.

As well as using Kalitas as a vampiric assassin on my opponent's creatures, he can also be used as a kind of fatty insurance. How so? Let's say you attack with a powerful, but fragile, big creature. If during or after combat it is about to bite the bullet, strike first with Kalitas and destroy it. You'll get a creature just as big to replace it. To add insult to injury, bring the original back with Gravedigger.

I don't have room for a deck list, but consider this convoluted Kalitas combo:

Kalitas, Bloodchief of Ghet + Priest of Yawgmoth + Sword of the Meek + Intruder Alarm + Disciple of the Vault + any other 1/1 creature

to your mana pool. Use that mana and an extra

to have Kalitas kill the 1/1. A 1/1 Vampire creature token will be created. Intruder Alarm will untap your black creatures. Sword of the Meek will come back, equipped to the new Vampire token. Finally, your opponent will lose 1 life. All that for a "

I think that's my cue to say goodbye, but I promise I'll be here again next week!