ey all, and welcome back to the lab! Watch your steps this week: I've tracked a bunch of sludgy tar through the usually spotless lab atrium. Good thing I have more than one atrium, or atriums. (Atriui?) Anyway, the reason this sludge is ruining a perfect slate of cleanliness is attributed to a tricky trio of black rares that I've been studying lately. One of which, Thought Gorger, I've been juggling for a while now. Earlier this year I asked all you faithful readers to put your heads together and think up some cool ideas on Thought Gorger and Renegade Doppelganger. Now, while the Doppelganger has gotten two decks since, the Gorger simply hasn't gotten one.

Well, today's the day I even out the scales, by providing the two best reader produced Thought Gorger decks. In addition, I'll also cover two other black rares from Rise of the Eldrazi that haven't gotten their due in some form. These cards, Baneful Omen and Repay in Kind, are big, bulky, expensive, and thoroughly black. Let's swampwalk over to today's five examining tables. (Just imagine each paragraph is an examining table, with the deck as the main experiment. Hey, I am supposed to be a mad scientist, remember?)

Like the other black rares on today's docket, I'm going to quickly examine Repay in Kind's massively black flavor. Not to step too hard on newly printed Vorthos Adam Lee's toes, but I like to take some time to discuss subjects that interest me, and flavor often qualifies as such a subject. 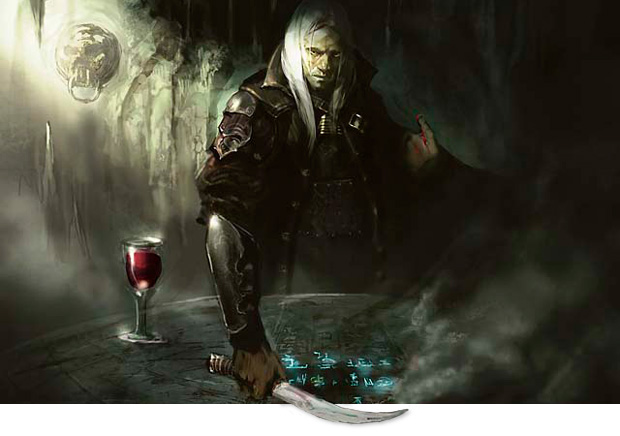 Repay in Kind, first of all, has a great name. It is simultaneously mouthwatering and ominous, a rare juxtaposition of traits in card names. Then, add the grim image of Sorin Markov staring out from the art box, holding a long blade and savoring a cup of wine (at least, I hope its wine.) Finally, the card text and the flavor text hit like twin stakes in your opponent's coffin. I can imagine someone in a giant multiplayer game taking a bunch of early pain, only to be left for dead, after which he unleashes his 'perfect vengeance'. Sounds sweet to me.

But as this column is neither Savor the Flavor nor Serious Fun, let's get to the combos! A couple of weeks ago, a reader by the name of Daniel Bennett let me know about his secret Repay in Kind combo. It involves the three-card combination of Repay in Kind, Ad Nauseam, and ... Platinum Angel. In his words, "With Platinum Angel on the board, cast Ad Nauseam and keep revealing until you find a Repay in Kind. You may be at a negative life total at this point and if you get to cast Repay in Kind ... all your opponents lose!"

It is devilishly simple. All the pieces are in Standard, so I went ahead and kept the rest of the deck that way. The goal in the early and middle game is to kill your opponent's threats and safely drop Platinum Angel. Once that is accomplished, wait until the end of your opponent's next turn, and then cast Ad Nauseam. Reveal everything you can until you have both a negative life total and Repay in Kind in hand. Cast it on your turn to stylishly cause your opponent to actually lose of negative life!

Baneful Omen is a remarkably black card. Triple skulls in the converted mana cost, artwork with barely a shade of light, and another lovely 'each opponent' punishment trigger. If black is going down, it's sure as hell taking everyone down with him, and Baneful Omen is a testament to that. The unlucky merfolk poring over that dark lore knows what I'm talking about. 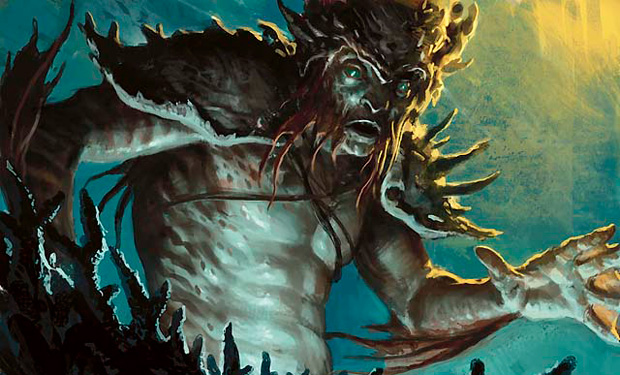 I love playing with cards that play easily in the early game, and yet contain enormous converted mana costs. As an example, check out my Hedron Matrix deck I built a couple weeks ago. Suspend, evoke, morph, and more are all some of my favorite mechanics for this reason.

We'll worry about sticking Baneful Omen on the battlefield later. For now, I'm concentrating on maximizing the levels of life loss. Large converted mana costs are a must of course, but I'd really like a way to repeatedly manipulate the top of my library. Words of Waste can keep a high costing card on top of my library while bugging my opponent. Jace, the Mind Sculptor (one of the more ludicrous cards to be recently printed) can provide free Brainstorms turn after turn as a permanent. Yeah. Scry cards such as Cryptic Annelid and Condescend can help stack your deck. Liliana Vess and Bringer of the Black Dawn are expensive ways to do the same.

So, how to actually get Baneful Omen onto the battlefield at a desirable turn? Classic methods from Time Spiral block come to the rescue. Storage lands like Dreadship Reef and the incorrigible Coalition Relic can amp you up to the correct levels. The rest is elementary: Just sit back and let your Omen go to work.

2 Bringer of the Black Dawn

Here are the three best Thought Gorger decks that I received via email over the last couple of weeks. Thought Gorger is such a cool card for many reasons, and I'm glad that creative deck-builders saw fit to reward with an innovative deck or two. 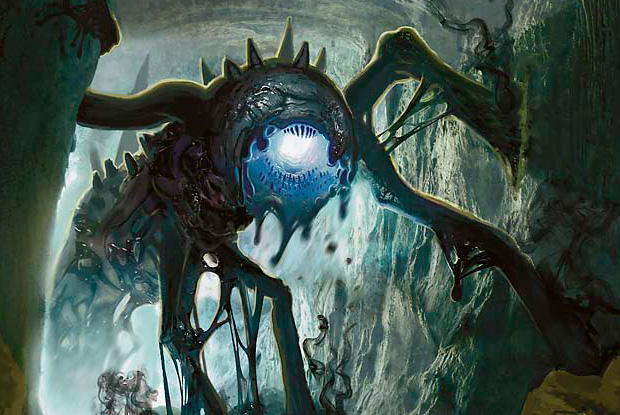 The first deck comes from Fluffysalt (yep) and focuses on comboing the Gorger with Gibbering Descent, that forgotten king of madness. Discard a Descent to an early Patrol Hound or Gathan Raiders to get it on the battlefield early. "Then," says Fluffysalt, "play Thought Gorger, discarding your hand and triggering hellbent. Now your opponent is losing life and cards, while you don't have an upkeep."

Taking advantage of your one-sided Eon Hub are some cheap beaters that normally are affected by upkeeps, such as Calciderm and Phyrexian Soulgorger. I loved that idea of Thought Gorger + madness, so I added some Brain Gorgers (theme bell!)

The next deck is similar to the previous one in that it focuses on pairing Thought Gorger with a synergistic mechanic. This time, it's primarily hellbent. As deckbuilder Kyle Brecht said, "The best card to pair with big, evasive beaters that leave you handless is quite obviously Anthem of Rakdos." Kyle was strongly reminded of Malfegor when reading Thought Gorger for the first time, and added the discard happy Demon Dragon. Other related cards made Kyle's deck, including Dread Slag (a useful beater when played at the right time), Avatar of Discord (a staple of early hellbent lists), and Cragganwick Cremator (a fun looking card that I never used during Shadowmoor block.) I added hellbent titans Jagged Poppet and Rakdos Pit Dragon, and the deck was successfully modified.

The final deck today comes from ace Johnny Nate Hannon, the builder of the second place finisher in the Birthday Contest and known on the forums as goblinrecruiter. I love his deck descriptions, so here's Nate on his deck:

"I came up with an idea for a deck based around making Thought Gorger repeatedly enter and leave the battlefield. How do you take advantage? One way is to have Doubling Season on the battlefield. This way, your Thought Gorger Is twice as big each time—or nearly four times as big if you used Vanish into Memory. Another way is to use Lorescale Coatl, which will become huge as you repeatedly draw and discard cards (and also likes to have Doubling Season around.) Finally, you can discard lands and repeatedly dredge Life from the Loam to make your Thought Gorger bigger.

Jace, the Mind Sculptor is here primarily for his "Brainstorm" ability, but with the help of Doubling Season and Gilder Bairn, he can be an alternate win condition."

3 Life from the Loam

4 Thought Gorger 3 Life from the Loam

And, that's that! Until next time!