ello and welcome back to the Lab. The Dark Ascension preview weeks just keep on rolling, all building toward the eventual release of this set in just a couple weeks. So far, the set feels like an extra basin that caught the excess Gothic juices of Innistrad. Disturbing horror tropes? Jar of Eyeballs; check. New ways to transform? Soul Seizer and Chalice of Life; check. Boundary expansion of flashback? The Increasing cycle; check. Some downright malevolent cards? Ravenous Demon; check. (It's a demon that openly eats Humans, for Avacyn's sake!)

Lots of the cards previewed so far make me twist in excitement or tap my lip in thought. This includes today's preview card.

Of the many cornerstones of popularized magic tricks (note the lower case in this instance), making things disappear into thin air remains a vivid illusion. That coin that was taking up material space under that covered jar is just gone now. It was there, but now it's gone. There's a new coin-shaped lick of empty particles where it used to be. Except...wait...okay, it's back now. Never mind.

Translated into upper-case-style Magic, this guile manifests through the various cards that act as ushers for the exile zone. Momentary Blink, Turn to Mist—that kind of thing. Blink something out for a sliver of time. These cards are versatile pieces that are welcome in many strategy webs.

The latest riff on this wavering ability blows off its proportion hinges. ?

Simple but sturdy, Sudden Disappearance brings a mass blinking power to the table. For example, you can target yourself and activate a ton of "enters the battlefield" abilities. Neat enough, but Sudden Disappearance isn't just an expensive Ghostway. The "target player" gives this card a lot of flexibility. And power. Sudden Disappearance can turn your opponent's battlefield into a ghost town rife with wailing winds, the only sonic remnants of the sorcery's spectral thud. Devoid of any threats, it's a battlefield ripe to combat or manipulate.

My first building block of cardboard structures is often a basic line of thinking. When I built these decks with Sudden Disappearance, I tried to sow advantageous seeds into both of its possible targets. Targeting my opponent is usually a good idea within any aggressive deck as a way to ensure damage. To that end, I searched for a frenzied weenie-deck skeleton that complimented Sudden Disappearance's other potential target: myself. By suddenly vanishing all my creatures, they could return and fill the stack with some neat abilities.

But let's amp up the situation further by considering Leyline of Anticipation (or its colorless counterpart, Vedalken Orrery). Sudden Disappearance becomes a lot more dangerous at instant speed. What if, during the time your nonland permanents are Disappeared, something... drastic... were to alter the board? Like, say, a Magus of the Disk blowing up the world? In response to the Magus's trigger, instant-cast Sudden Disappearance. All your stuff vanishes, including the Magus, even though its doomsday ability is still on the stack. By the time your nonland permanents reappear, the scales will be tipped in your favor. 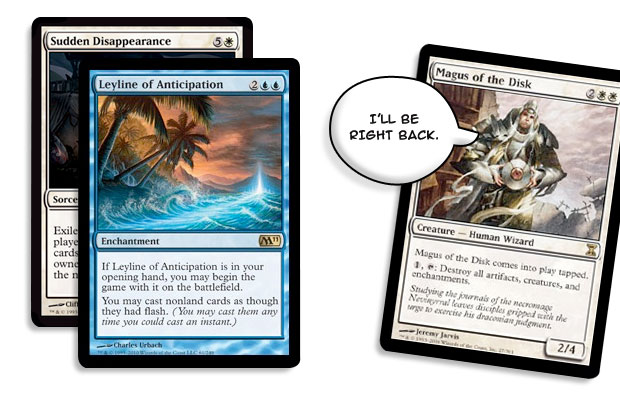 In the end, I used a sect of red, white, and blue Human Allies for my troops. Hada Freeblade, Kazandu Blademaster, and Akoum Battlesinger all beat astutely. Kabira Evangel is a helpful and protective piece. An ideal plan is to blank out a squadron of Allies led by Kazuul Warlord. They will all return and fill the stack with flourishes of +1/+1 counters. Jwari Shapeshifter is a versatile piece that can enter play as a measly Hada Freeblade, but after a Disappearance it can return as a Warlord.

Champion of the Parish is an ally in all but creature type to this deck, triggering for nearly every creature in it, including the aforementioned Magus of the Disk. Season with some mana acceleration (let's go with Darksteel Ingot—it'll survive the Magus). I also added a singleton Sea Gate Loremaster, which can draw you scads of cards. Murasa Pyromancer was a narrow and late cut from the deck, but it remains an explosive option.

4 Champion of the Parish 3 Hada Freeblade

3 Magus of the Disk 4 Leyline of Anticipation


A fun "enters the battlefield" ability to abuse here could be Mnemonic Wall's, as it enables a soft loop. The Wall comes back from exile and returns the spent Disappearance to my hand. I could then theoretically cast Sudden Disappearance on my every turn, targeting myself, and reap some rewards.

I'll need a ton of suitable creatures to blink forevermore. Suture Priest seems amazing in a Sudden Disappearance deck, as it sways with the spell to either boost your life total or reduce your opponent's. Riftwing Cloudskate is a solid bouncing flier. Aven Riftwatcher can pad my life total further. And Stonehorn Dignitary seems an excellent inclusion. Endless appearances from this noble Rhino should lead to a stretch of peace, hopefully during which you assemble your endgame.

What exactly would that be? I looked at this budding white-blue life gain deck, and decided to dip into the Dark Ascension spoiler for a fitting winner. Drogskol Reaver is nutty in nearly every way. The Reaver provides a parcel of cards as it double strikes its way to victory. To clear its path a bit, I turned to Steel of the Godhead. Including this aura of life and evasion warranted a smattering of other white-blue dudes. Mistmeadow Witch was something close to perfect, as it interacts with many of my "enters the battlefield" creatures. Augury Adept seemed right here, and Sawtooth Loon was a funny find, capable of gating back a Dignitary and adjusting my library a tad. 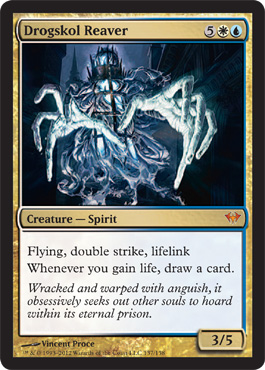 Angelic Chorus, Words of Worship, and Elixir of Immortality rounded out the deck with synergistic and helpful traits. With the Words and Drogskol Reaver out, you have an engine that reads, "


Obviously, that attempt is just a second offering of Sudden Disappearance's well of possibilities. Here comes another stab. See, I noticed that Sudden Disappearance could enable a situation in which my opponent controlled no creatures. Even if it was a temporary emptiness, a window of creaturelessness still existed. 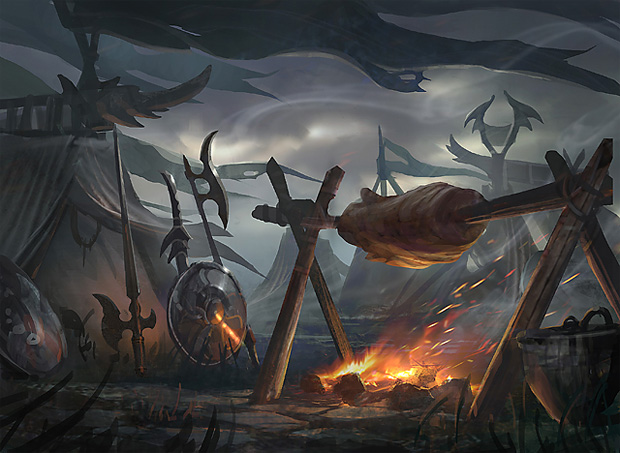 For some reason, it seemed prudent to capitalize on this. Unfortunately, Sudden Disappearance's clunky mana cost usually disallows any fellow trickery (six manaain't cheap). Hmm...pity I can't cast it for, oh, free. This isn't just my Lazy Depressive Fantasist disorder exposing itself (Example: "Too bad I don't have telekinesis." *sulk*). It's a deceptively regretful lead-in into the following revelation: Thanks to Spellweaver Helix you can!

More accurately, you can do anything with a Helix. The imprint icon is often the missing piece to the wilder ideas in Magic. In this case, I'm looking for a way to take advantage of my opponent's zero creatures. Is there a sorcery that can help me out? I knew it! Thanks, Biorhythm!

With these two spells imprinted on the Helix, cast a Biorhythm from your hand. The Helix triggers and spits out a Sudden Disappearance, evaporating your opponent's side of the board. Then Biorhythm, and if you control at least one creature, that should seal the game.

I need to incorporate some mana ramping (to get up to eight) and discard outlets (to get the sorceries into the graveyard). Greenseeker dovetails my requirements and ushers in an Elf theme. Elvish Archdruid bolsters a team of Elves while channeling their collective green souls into mana. A bunch of other Elves made the deck to help my themes: Sylvan Ranger, Elvish Visionary, and Farhaven Elf all thin my deck and are prone to bountiful Disappearances. Wirewood Hivemaster and Essence Warden like it when I get lots of creatures out. Llanowar Mentor is a fun singleton discard outlet.

Actually casting the sorceries to get them primed for a Spellweaver Helix isn't a bad plan either. A fun trick at eight mana is to Suddenly Disappear your opponent's creatures, then cast a Riftsweeper to sweep a threatening piece into your opponent's library. Riftsweeper also has synergy with Oblivion Ring, turning it into something closer to an Exclusion Ritual. And Biorhythm is its usual swingy self. Nonbasic lands like Gavony Township and Vitu-Ghazi, the City-Tree lend themselves to such a deck.


I've barely scratched the surface of scenarios that Sudden Disappearance can thrive in. Can you endeavor further with this card? How about any of the Dark Ascension cards? Send me some nifty decks so I can use them as article blubber in the coming weeks. Hey, it is winter after all.