elcome back to the Lab. With one theme week to go before the unveiling of Avacyn Restored's previews, all the columnists have a giant shiny rock of mysteries on their minds. I of course speak of the Helvault, the touted legendary prison that plays a pivotal role in the saga of Innistrad. 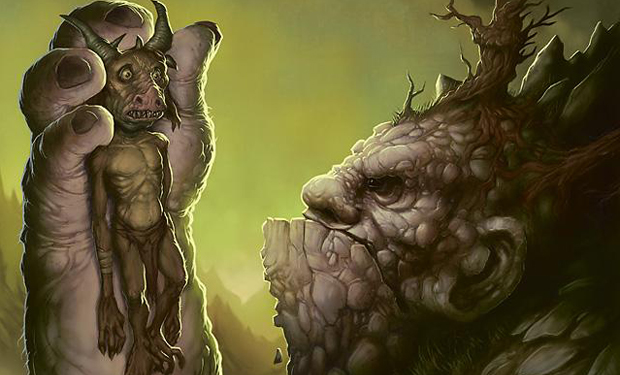 While I'm all for celebrating this important artifact, I must confess to feeling a bit bummed, for I've already used up a cool Helvault deck. In February, I wrote about a mono-blue deck that sought to exile a bunch of my opponent's creatures with Helvault, sacrifice it to Throne of Geth, and cast Gather Specimens to steal all my opponent's creatures. Why didn't I save it for this week, as part of my meticulous theme-week planning that I talk about every two columns? (It's the latest in word-count eating technology.) In a word: Confusion. But fear not, for I have a couple new decks that involve the Helvault!

As for the rest, I decided to run with a quasi-theme of legendary artifacts that might have been neglected or forgotten in the dusty backs of binders. Let's get to it!

Last time, as I mentioned, I went with a mono-blue supporting cast for Helvault. This time, I think I'll switch it up and go with a mono-red skeleton. Red offers some interesting tricks with the silver stone of storage. Primarily I wanted to work with Act of Treason effects. Steal your opponent's creature, attack with it, and then store it in the Helvault for a measly one mana! Unwilling Recruit stepped up as a great variant of this effect for mono-red decks. 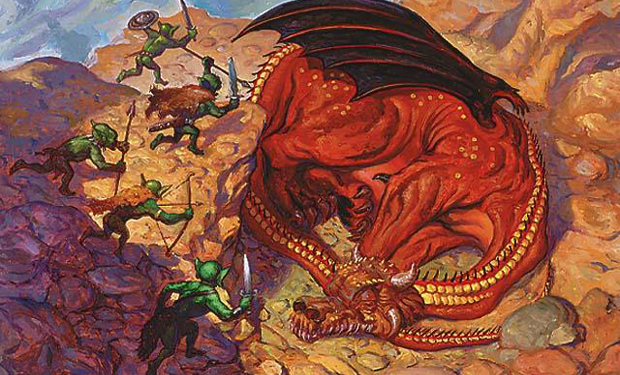 Another red card that I wanted to use with the Helvault was Sneak Attack, an old but still quite-formidable powerhouse. I like to use these kinds of forgotten weapons (as you might tell from the rest of the article and my column in general). Sneak Attack can pop out a hasty attacker for a turn for one red mana, and for another mana, Helvault can help it dodge the sacrifice. Later, if you wish to pop the 'Vault, you'll get those creatures back!

I searched for creatures that dovetailed with my deck's aims. Bringer of the Red Dawn was a fun find, able to yank creatures over to your side for free. (The singleton Crystal Quarry can potentially rainbow the Bringer out as well.) Dominus of Fealty performs a similar trick while pleasing me with its mana cost. Conquering Manticore was a similarly fun find. If you Sneak it out, the resulting chaos could put your opponent in a quick hole.

Other facets I looked for were methods of sacrificing my Helvault. I searched for flexible cards that could also sacrifice creatures stolen via an Act or Unwilling Recruit. Greater Gargadon stepped up, fulfilling this role as well as being a 9/7 to Sneak out sometimes. Another fun find was Magmaw. I'm not sure how I overlooked this card, as it's streaked with all the wacky stripes I search for in Magic.

The last additions were Pyroclasm, to keep faster decks off my back early on, and Everflowing Chalice, for the mana. I was also looking for a giant red spell that fit, and a timely email from recurrent inbox psychotic Darth Parallax reintroduced me to Insurrection. Yeah, that's what I'm looking for.

4 Bringer of the Red Dawn


While I was researching the above deck, I kept stumbling upon a thematic line of cards that fit with my aims. These were the Spirit/Arcane spells of Kamigawa, and so many showed up in various searches that I decided to try to build the deck with that slant. Cunning Bandit was particularly intriguing, as with enough ki counters, he can flip into Azamuki, Treachery Incarnate, who can repeatedly nab opposing creatures. Blind with Anger is an Arcane version of Act of Treason, so it goes. And I was thrilled to use Skyfire Kirin. With Spirit and Arcane spells hitting the bell curve up to six mana, the Kirin could come in handy. 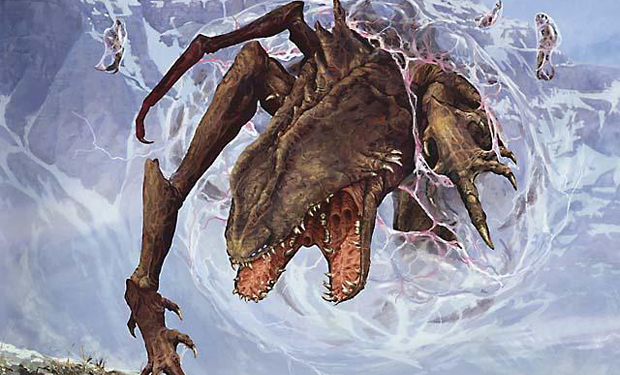 Through the Breach | Art by Hugh Jamieson

Meanwhile, Through the Breach is the Arcane take on Sneak Attack, and splice just adds shreds of versatility. Other Arcane spells are rampant, like the ever-fiery Glacial Ray and sturdy Rend Flesh. There's even an Arcane method of removing the Helvault: Crack the Earth!

You'll notice I casually slipped in a black card there. It's true; I wound up going black-red for the twistedly powerful Goryo's Vengeance. What legendary Spirit could I instill with necromantic revenge? I can think of one bitter candidate: the mighty Kokusho, the Evening Star. This card's reign of terror was cut short some years ago when it was (rightfully, I suspect) banned in Commander. I'm sure it's been waiting for retribution, and I'm happy to ask for Kokusho's life-draining services. Playing the full four still conjured a queasiness somewhere in my lower belly region, though, so I shaved one for its red counterpart, the magma-spewing Ryusei, the Falling Star.

Here's where I wound up on this idea trail. I added Bloodghast as a recurring Spirit that's neat to sacrifice to Crack the Earth. Phyrexia's Core can ice the Helvault if needed, as well.

That’s enough fun with Helvault decks. Now I can settle into a sprawling look at some intriguing legendary artifacts of Magic's past. 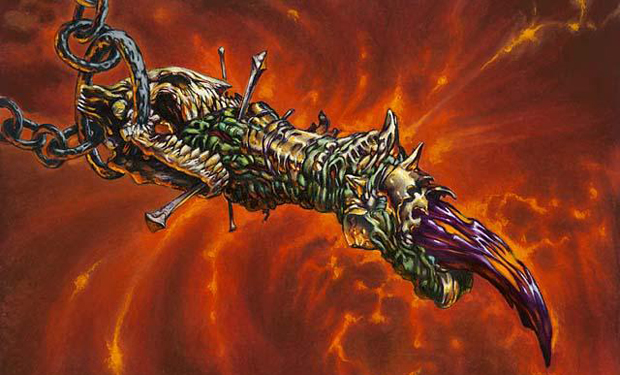 One of my favorite off-the-wall cards has to be Krark's Thumb. This card bends the inexhaustible force that is probability to your will, and is thus guaranteed to boggle some minds, or garner some giggles (okay, just mine).

I occasionally like to show off the decks that I use in physical Magic, as long as they correlate with theme weeks and such, and my coin-flip deck seems ripe for an opportunity today. Spells like Stitch in Time, Fiery Gambit, and the furiously mind-melting Odds can flip a bunch of coins for potential profit. (I splash a Plains for Ends, as well.) Innistrad gave me a new defensive singleton to throw in: Creepy Doll! Kaijin of the Vanishing Touch and Pyroclasm can play good defense too.

That mesh of cards is no doubt frenetic, but where's the wacky? Feast your retinas on Eye of the Storm. This card turns the game on its head, and is why this deck is a personal favorite to play with. Every instant or sorcery will be blown about by Eye of the Storm, causing insane collisions and stacks of spells, which obviously will lead to a ton of spinning midair coins, which is my kind of weird.

Hopefully a win can be enabled by multiple Fiery Gambits. With Krark's Thumb flipping, the odds are in your favor. (Psst! Subliminal hint there! Use Odds on the Gambit!) Otherwise, a Chance Encounter can sometimes build up the luck counters for a bizarre victory. My favorite aspect of the deck, though, is that the Eye's global scale enables my opponent to potentially win with my deck. That's fun to me because I've forced him or her to try to win my way. By flipping tons of coins. It's a subtle morphing of the game, and I enjoy it.

3 Eye of the Storm 1 Chance Encounter

1 Nivix, Aerie of the Firemind 2 Kaijin of the Vanishing Touch 3 Pyroclasm 3 Manamorphose


I wouldn't feel right without mentioning that years ago (the golden era of Ravnica, specifically) the inspiration for building this deck came from both opening three Eye of the Storm in booster packs, and a Chris Millar article. You should read that article, and also all of Chris's other articles. His former stewardship of the Lab (then called House of Cards) was commendable and inspiring nearly every week.

Today's final legendary artifact is the Skyship Weatherlight itself. As the titular airborne vehicle of the massive Weatherlight saga (which spanned a good four blocks), the Skyship is a significant artifact of Magic's canon much like the Helvault. (Although I don't recall an armada of Skyships descending upon the Planechase Prereleases.) 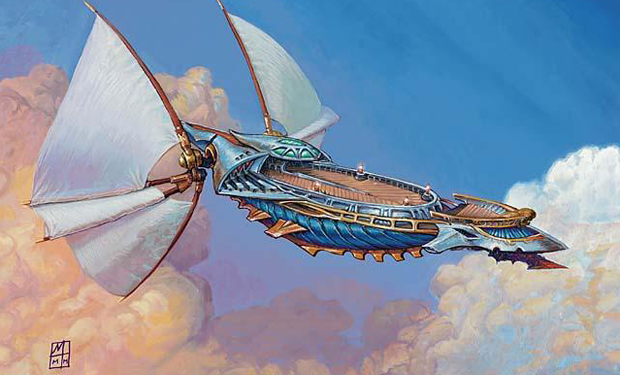 The Skyship is a tricky card. You can either use it as a tutor for a single card or for a great many, thinning your deck considerably. I'm going to run with the latter idea, namely because of my first motivating piece: Shelldock Isle. This hideaway land can pop out something gratuitous if a library is twenty cards or less. The Skyship can bring about that situation by exiling a ton of useless artifacts from your deck, leaving beatsticks to be hidden away.

Since I was planning on using Myr to ramp up, I choose Myr Battlesphere as my win condition of choice. The rolling ball of Myr also facilitates a heavy Myr secondary strategy, which I will employ. Myr Galvanizers offer another game plan: generate infinite mana with Palladium Myr and pour it into Steel Hellkite (another choice fatty). Myr Turbine was a fun related card to add as well.

As for the filler artifacts, I chose ones that could stall. Brittle Effigy deals with threats, and Æther Spellbomb can bounce or draw at your whim. Metallurgeon can protect Skyship and other artifacts, and Phyrexian Metamorph is a flexible stalwart.