fter three weeks of previews in which the cards of Magic's latest set trickled out, one droplet of infinity after another, the tidal wave finally crested on Monday. If you haven't checked out the complete Innistrad Card Image Gallery yet, you probably should. The set represents two surges of excitement to me. It's crammed to bursting with delicious nuggets for Johnnies like me to toy around with, and it drips with gooey resonant horror flavor.

Reading through the cards in any new set, with the full effect of art and flavor text helping me along, is rather like traveling to the plane itself and seeing what spells speak to me. Since I'm about to have a big ole deckbuilding session, it's important to warm up, stretch out, and all that good stuff. Innistrad's horrific qualities reek of a clearly new style when it comes to designing sets, and this shift to flavor- and story-based design is something I've been mentally pushing for a while. As if my mental pushing ability has any effect. On anyone.

Anyway, what cards from Innistrad made me squirm in my seat? Claustrophobia was pretty visceral, and immediately made me think of Buried, an inspired thriller film. Hysterical Blindness is pretty unnerving. Dead Weight chills me. Bump in the Night and Corpse Lunge each earn an uneasy smile. Evil Twin makes me grin for so many reasons (__________!!!!!!!) and it delivers on its scary premise. Endless Ranks of the Dead is dread captured in a card (sorry, Dread). Creepy Doll is sufficiently creepy (scissors... so rusty...). The award for most cringe-inducing artwork goes to Steven Belledin, for Sensory Deprivation. Yeeouch.

I'm sure I will have opportunities aplenty to discuss the many layers of Innistrad in the weeks ahead, what with theme weeks and such. For this week, with the umbrella theme of "Innistrad," I thought I'd tackle three exciting rares from the set. Hopefully I don't paint myself into a corner with these chosen test subjects. (...I'm not Ludevic. I'm Laboratory Maniac, remember?)

One of my favorite aspects of Magic cards is the concept of mana cost, converted and otherwise. Okay, so all the aspects are my favorite on different days. Still, lots of the combos I enjoy deal with the upper right hand corner (or down the left-ish side, in the future). Converted mana cost lets you know what spells are worth in mana. I've always wondered what my ethereal mana cost is. The Laboratory Maniac jokes aside, it definitely contains blue and red symbols. I like to think that I'm somewhat expensive, enough so that the Spikes steer clear and the Johnnies venture closer, curious. However, I'd gladly take a three- or four-drop slot. I always did identify with Jhoira of the Ghitu, especially from an ability standpoint. Hmm, and Halloween is approaching... 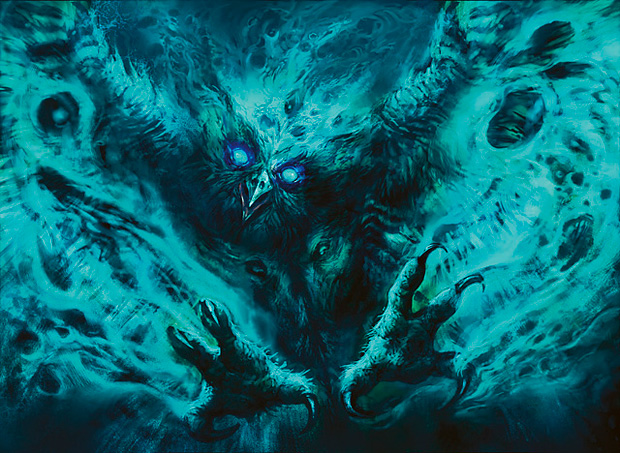 Done? I'm assuming some of you were busy retching. I hope there are no hard feelings. Where was I?

Oh right, converted mana cost. There happens to be a new card on the block that messes with converted mana cost in a way that's right up my alley. Say hello to Mindshrieker. Don't be fooled by its apparently wispy stats; this Spirit Bird has the capability to swing for the win. 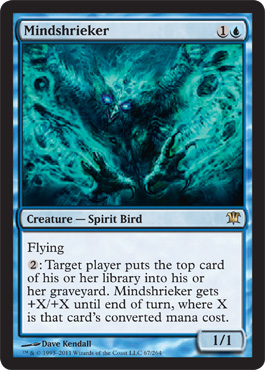 What's amazing about Mindshrieker is its ability to target not just your opponent, but yourself as well. I initially misread the card, and still thought highly of it for many reasons (it qualifies as an infinite mana sink, and it can combine with cards like Time Ebb to mangle your opponent's board development). But when I reread it and saw the magic phrase "target player," I began laughing and didn't stop for a while.

To swing with a lethal Mindshrieker, I'll need a deck loaded with high converted mana costs. The trick is they should be castable in the early game. The fallback answer to this deckbuilding conundrum since 2007 has been the evoke creatures. Mulldrifter, Shriekmaw, and Æthersnipe provide basic game-play functions (bodies, cards, removal, bounce) with extra=high converted mana costs to boot.

While these cards give the deck some grease, I wanted bombastic Mindshriekers. I wanted one to swing for 21. After viewing the small pool of ten-mana cards, I settled on three Deep-Sea Krakens (which can be suspended early if need be) and a Kozilek, Butcher of Truth, which can cleanse your graveyard upon getting Mindshrieked.

How to nestle these fatties on top of my library? Scry seems useful (and Cryptic Annelid seems the most fun) but truly, it's Insidious Dreams to the rescue. At instant speed, you can discard any excess cards (even creatures—you'll see why in a bit) to set up your library. Stack some Krakens near the top so when you untap, you'll have a cache of chunky converted mana costs.

The rest of the deck's cards were included based on synergy. Dead Reckoning seemed the perfect removal spell, as it has the bonus of recurring a creature and setting up a potential Mindshriek. Footbottom Feast can play Insidious Dreams #5-6. Lantern of Insight lets me know what's in the near future for both players, just in case I need to Mindshriek away a threat. Along those same lines, Architects of Will is a flexible cycler that meshes well with everything else.

I thought this would be a fine opportunity for Nephalia Drownyard, one of five new nonbasic lands that I guess I have to carve into my brain for allied-color decks.

Innistrad also marks the return of flashback (ha?). To Magical newcomers who may not have been around for the original production (seen in Odyssey block) or its street-theater return (in Time Spiral block), this ability gives mages the power to recall past instants or sorceries, if only once more. Innistrad has lots of fun cards to add to the mechanic's lineage. Army of the Damned might be the marquee one, but Creeping Renaissance and personal fave Desperate Ravings bring up the rear with style.

Some Innistrad cards mess around with flashback in more subtle ways, though. Runic Repetition chances a venture into the exile zone to bring back any card with flashback. At this point I will shed my stoic stance and plead for Pull from Eternity, one of my favorite cards, to make a return sometime next year. 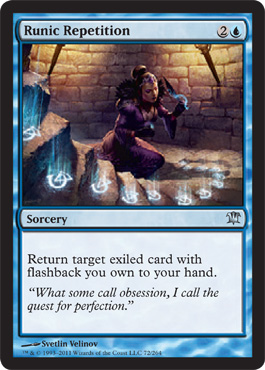 Snapcaster Mage can give any instant or sorcery in your graveyard flashback, which is pretty zesty. Cards like Recoup and Dralnu, Lich Lord have dabbled in this area, but not quite as eloquently as Tiago Chan's card. 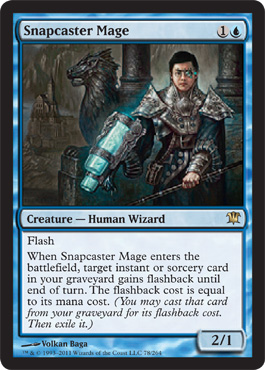 All these words about flashback are really the build-up to the card I actually want to talk about: Past in Flames. FOOF! There goes my memory... and ideally, here comes some game-winning profit. 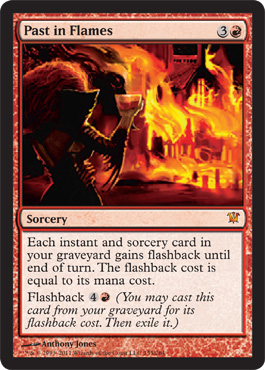 With enough of those cards either in hand or in the graveyard, a single Past in Flames could translate into tons of red mana. From there, either go for some giant Grapeshots, or flow it all into epic Comet Storms (Kumano, Master Yamabushi is also an acceptable mana sink).

I wanted ways to take advantage of casting lots of instants and sorceries. After a vigorous internal debate (in which I was both sides, and turned out to be dead the whole time), I decided that Sphinx-Bone Wand actually had a legitimate home here. You can accelerate into it with your red mana spells, and spend the rest of the game upping its counters and dealing lots of damage. From there, I naturally thought about proliferation, and added Volt Charges and Everflowing Chalices (more burn, more mana, more counters = more mirth).

I also decided that Burning Inquiry could be amazing here. As far as red card draw goes, it's in a league of its own, as it randomizes your opponent's hand as well. This deck wants a loaded graveyard anyway, and even if you randomly discard Past in Flames, no worries, as it itself has flashback. Yay for elegance! 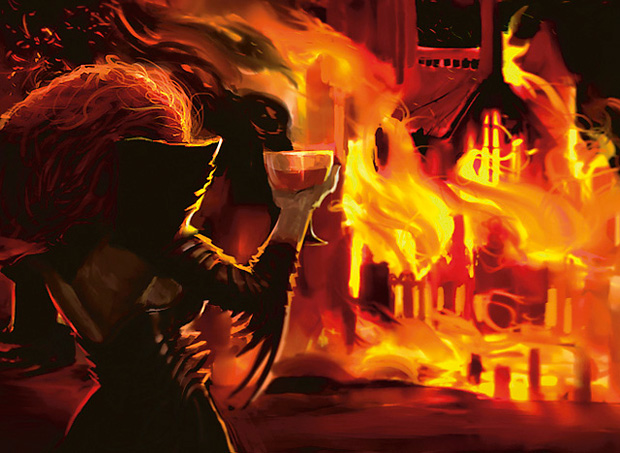 Past in Flames | Art by Anthony Jones

This deck might implode one game and explode the next. The best part is I have no idea which one I prefer! 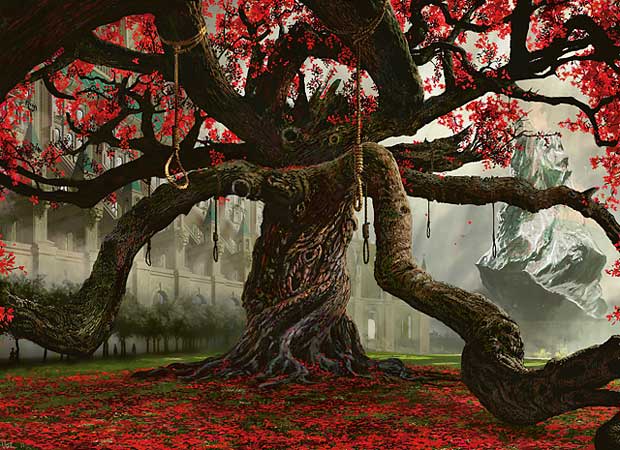 Behind leafy barriers and sturdy walls coated in vines and foliage lies a secret tree. The mysterious Tree of Redemption. Its effect on a game is completely unprecedented. Players have been able to swap their life totals with other things before (usually other life totals), but never before with a creature's toughness. And the tree is a solid 0/13 for four, warding off foes while slowly gaining you tons of life. 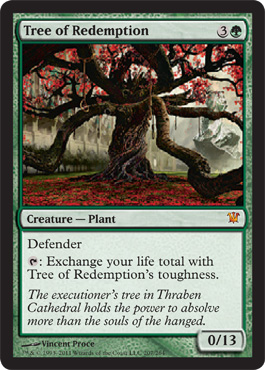 Through what combining cards? After some time on Gatherer, I went with Boon Reflection. Since you gain life in the exchange process, the Reflection will apply. So let's say you've already used the Tree (so it's 0/20, and you're at 13). Swap again, and you'll wind up at 27. Two more swaps later, and you're at 41. This may be the only combo that can gain you steady amounts of life by ascending multiples of seven. (That's assuming no other life gain, life loss, or toughness-changing shenanigans in the process, to keep the math simple.)

I wanted to speed up my swaps, though. Battle Rampart could give a turn-four Tree haste. Better still was Quest for Renewal. With all my tap-happy defenders (Overgrown Battlement, Vine Trellis, and Opal-Eye, Konda's Yojimbo (you heard me)) I could complete the spiritually cleansing quest in no time and visit the Tree of Redemption every upkeep.

Interlocking glue cards were needed, and I went with a strange array. Oracle of Nectars could gain me tons of life potentially every turn (with the Battlements being their broken selves.) Cradle of Vitality could make my Tree even more massive. Cathedral Membrane finds a single slot to call home as a bizarre white source of 6 damage. I figure Heal the Scars on a marked-for-death Tree would cause me to burst into hysterics.

My favorite find for the deck was Searing Meditation. Renewal, Redemption, Meditation...this is deep stuff. Pour your defender and land mana into the Meditation for some damage.

I still needed a way to win, and Test of Endurance entered stage left. Idyllic Tutors followed quickly to keep my key enchantments within reach.

Have fun this week at Innistrad Prerelease events, y'all. Until next time.