Within the Hive Mind

ello there, folks. It is I, the friendly neighborhood laboratory-keeper around these parts! Welcome to another installment of the Magic 2010 previews, which have certainly been exciting so far. Some of this stuff, I haven't even seen coming, and I semi-work for these guys! 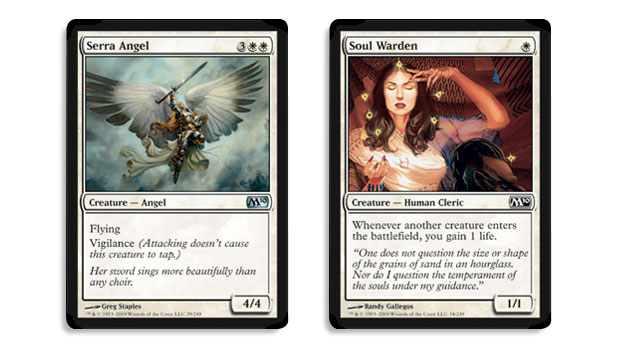 I mean, a silver-symboled Serra Angel was not that hard to take, since the flagship angel was originally uncommon. Soul Warden, however, looked downright imaginary with a black symbol. Of course, the trained mind will realize that Soul Warden was also originally common back in Exodus, before I began playing.

I know you are all waiting patiently for today's Johnny-tastic preview card, but allow me to gush about the most exciting thing in the entire world for a moment. That, of course, is the shocking return of Lightning Bolt. As a pure red mage as opposed to any other color, I've always known Lightning Bolt as the unspoken emperor of cheap red burn. Before Magic 2010, you could have an animated discussion about the best cheap red burn in Standard (or even Extended) and come up with Incinerate, or Lash Out, or something similar. Lightning Bolt is so awesomely powerful, it blows my mind that it's being reprinted. I break into hives every time it enters my mind.

All right, I've teased you enough. Take a gander at Hive Mind, because this thing is so open-ended I can't really set it up, unlike the far narrower Time Sieve or Mindlock Orb.

And as a gentle addition to this preview, since I know your brain is slowly bubbling over with ideas for this card, here's the gigantic FAQ for Hive Mind.

* Hive Mind's effect is mandatory. Each other player must copy the spell whether they want to or not.
* Hive Mind will copy any instant or sorcery spell, not just one with targets.
* If a player casts an instant or sorcery spell, Hive Mind's ability triggers and is put on the stack on top of that spell. Hive Mind's ability will resolve first. When it does, it creates a number of copies of that spell equal to the number of players in the game minus one. First the player whose turn it is (or, if that's the player who cast the original spell, the player to that player's left) puts his or her copy on the stack, choosing new targets for it if he or she likes. Then each other player in turn order does the same. The last copy put on the stack will be the first one that resolves. (Note that the very last thing to happen is that the original spell resolves.)
* The copies that Hive Mind's ability creates are created on the stack, so they're not "cast." Abilities that trigger when a player casts a spell (like Hive Mind's ability itself) won't trigger.
* Each copy will have the same targets as the spell it's copying unless its controller chooses new ones. That player may change any number of the targets, including all of them or none of them. If, for one of the targets, the player can't choose a new legal target, then it remains unchanged (even if the current target is illegal).
* If the spell that's copied is modal (that is, it says "Choose one --" or the like), the copy will have the same mode. A player can't choose a different one.
* If the spell that's copied has an X whose value was determined as it was cast (like Earthquake does), the copy has the same value of X.
* A copy's controller can't choose to pay any additional costs for the copy. However, effects based on any additional costs that were paid for the original spell are copied as though those same costs were paid for the copy too.
* If a copy says that it affects "you," it affects the controller of the copy, not the controller of the original spell. Similarly, if a copy says that it affects an "opponent," it affects an opponent of the copy's controller, not an opponent of the original spell's controller. 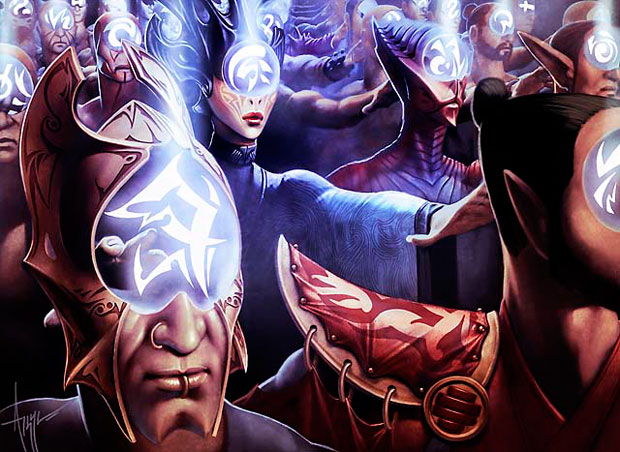 Hive Mind really reminds me of Eye of the Storm, because they are both expensive blue enchantments that deal with instants and sorceries, specifically multiplying them. The difference is that Eye of the Storm nearly rivals Bureaucracy in terms of comprehension difficulty, whereas Hive Mind is relatively easy to grasp. The effect is also a bit different: not as snowballing as Eye of the Storm, but just as fun.

Before we dive into lots of strategies, I'd recommend re-scouring that FAQ and specifically noting the very first asterisked part: "Hive Mind's effect is mandatory. Each player must copy the spell whether they want to or not." I may be exploiting this evil bit of psychology in the coming paragraphs, so have that fresh in your mind.

Strategies of the Hive Mind

Be Prepared: Before we get into breaking this card, you should have a good defense for any instants or sorceries others cast that you might not want to. Cursecatcher is a cheap way to counter your unwanted copy, and it's kind of wacky to have it counter a spell you control. Spiketail Hatchling and Daring Apprentice work as well.

Evil, Evil Instants and Sorceries: Does your opponent want to discard his or her hand? Whether that's a yes or no, One with Nothing will make it happen courtesy of Hive Mind.

Pact of Negation leads to an absolutely free instant win in a two-player game. The other Future Sight Pacts work too, but Pact of Negation is the best. Cast Hive Mind on your turn, then, when your opponent casts any spell, cast the Pact. If your opponent doesn't cast a spell, or if you're worried about paying, cast a spell on your turn (not an instant or sorcery), then cast the Pact to counter it. Hive Mind will trigger and make a copy of the Pact before yours resolves. When the dust settles, the opponent-controlled Pact will have to resolve and counter one of the two spells on the stack: your Pact, or the spell you were originally countering. Either way, your Pact never resolves (unless they have a tricky instant; this is one reason to do this on your turn). If you did all this on their turn, you can untap and spend your

as you will. Maybe play an Armageddon at that point. You won't care that it gets copied, since all lands are hitting the black nets either way. And your opponent had better hope to have

Spells with the epic ability are equally evil. Play an Eternal Dominion sometime after dropping a Hive Mind. Your opponent will get a Dominion copy, and bam—no more spells for him or her. Sure, he or she fishes something out of your deck, but you've come prepared and played only instants, sorceries, lands, and Hive Minds. Meanwhile, every upkeep, you can fetch any creature to beat with, while your opponent is locked down.

I was looking for a global Early Harvest sort of spell, and I found it in the silvery stuff of madness, Gerrymandering. Follow me on this. In a group game, play Gerrymandering and tap all your lands for extra mana. Each player will then have to play Gerrymandering. Directly after each time this happens, tap your new lands for whatever mana before the next dealing of lands. By the time your table is done Gerrymandering, you'll have a lot of mana to pour into a win condition. 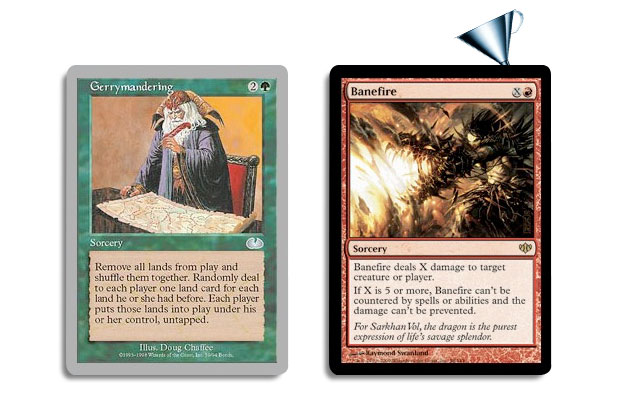 Does someone want to tell me what happens when you play Final Fortune under a Hive Mind? I'm not suggesting anyone do this. Just throwing it out there. If I understand it correctly, the extra turns happen in reverse of the order the effects resolve, which would be one way to end a group game, I guess, even if you'd be the one who died first.

Quasi-Burn: Global life loss (seen in such example cards as Stronghold Discipline) can work, as Hive Mind essentially acts as a free Twincast in this case. If you came prepared and packed few to no creatures, the double Discipline will hit the opponent hard. Hoarder's Greed is another weird one. If you can manage to stick a land or any other card with a converted mana cost of zero (like, say, a Pact) on top of your library, your opponent's Greed copy could "repeat this process" for a while. Along similar lines, Infernal Contract has such a strenuous drawback, you might as well have your opponent share it. This is also funny if your life total is lower at that point, as he or she will wind up losing more life.

Small Spells Become Big: I'm thinking in terms of multiplayer on this one, as I'm just quickly going over any many aspects of Hive Mind as I can think of. In a duel, an Unsummon becomes a Curfew, but in a big group game, it's more like an Evacuation. Likewise, Terminate becomes a nigh Wrath of God. Burn spells that target only creatures are great here, unlike regular "creature or player" burners, since there's no way you can be hit by a Hive Minded Electrostatic Bolt. In these terms, I prefer Dead and Fiery Fall for their versatility.

Restrictive spells: Flow of Ideas is the standard bearer of this subset. It's unlikely your opponent will have as many Islands as you (if any), so you should get the better half of the deal. Sweep spells such as Spiraling Embers work much the same way. Playing a tribal deck? Distant Melody should swing in your favor. The Pulse spells from Darksteel become more likely to bounce back to your hand when both players are slinging them. Mask of the Mimic is pretty restrictive, as your opponent is unlikely to have whatever you are searching for.

No (GASP) Spells: Go the gutsy route and run zero instants or sorceries, while planning to simply mooch off of your opponents'. Or, bend the rule slightly to include a couple copies of Cunning Wish, which can lead to all sorts of possibilities. (Note that due to the Magic 2010 rules changes, Cunning Wish can no longer find another Cunning Wish a billion times finishing with a Brain Freeze, but it can still get something from your binder, or in tournament games, your sideboard. See the Exile section of the Magic 2010 Rules Changes.)

There's probably tons more you can do with Hive Mind, and some of these deck ideas are definitely suitable doors to enter and explore. Hope you enjoyed the preview card (one of these days I'll get a red one) and we'll see each other next week. 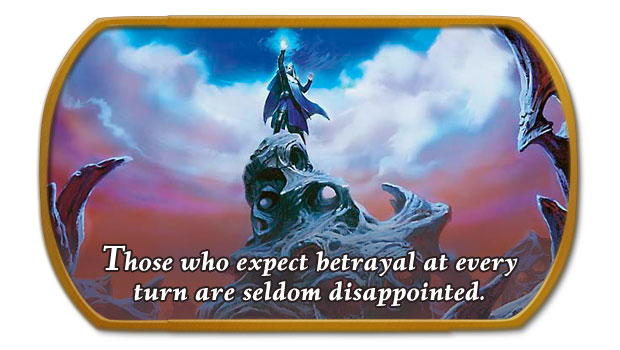