Wizards of the Coast offices are closed for the Thanksgiving holiday, but we'll return with new articles (and, perhaps, overstuffed stomachs) on Monday, November 30. In the meantime, here's the article that ran in this slot last week for those who may have missed it. Have a great weekend, and we'll see you on Monday! 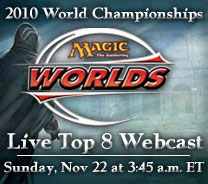 reetings, Magical comrades, and welcome to another week in the year of our favorite trading card game. As I mentioned haphazardly in my last column, this particular week is very important to the Magic calendar. Why? Simple: It's the World Championships! This annual tournament is held at the end of the year, where players tackle a variety of formats following the rotation. For Standard, that means Zendikar will be kicking it amongst the five shards of Alara. What strategies will prove themselves to be elite? We'll just have to wait and see.

In the spirit of the theme week, as always, I am going to take a weird approach to Worlds Week. I'm not going to build my idea of elite Standard success, as plenty of other coverage on this lovely site will be dedicated to just that. (And if that's what you're looking for, I wonder why you checked here, but I appreciate the gesture!)

Instead, I'm going to embrace that Johnniest of deck types: the theme deck. As you can guess, today's theme (and this week's) is "Worlds." Fortunately, there are some incredibly quirky cards with "World" (plural or not) in their name line. In Standard, we've got one that I'll talk about, which is the don't-blink World Queller. Finally, the always-devious Worldslayer finally finds a deck to call its home, thanks in part to another Zendikar card.

Before we get to that cornucopia of wackiness, let me just address some emails about the Lullmage Mentor deck that I made last week. Several readers emailed me suggesting various cards that would also work in the deck. Ivan Gregorio Hetem, Thomas, and John Cyrus all "reminded" me of combo stalwart Intruder Alarm. Actually, calling that card a "combo stalwart" is an understatement. It's broken in about 117,000 ways, guys, sorry for not falling back on it every time I ... oh, you get the point. Brian Couchman had a suggestion I liked much better, even though the card in question is fated to end up as a similar "stalwart": Rite of Replication. In his words, "7 Lullmage Mentors make 7 Merfolk every time you counter a spell ... 7 Merfolk that are only too happy to counter the next spell." In fact, here's Brian's deck skeleton that he included. It's likable and kooky; perfect.

4 Essence Scatter 4 Negate 4 Into the Roil

The only thing this deck needed was a victory condition and protection against Volcanic Fallout. With all the mana this deck can produce, I thought Lorthos, the Tidemaker would be fun and useful. As for the uncounterable Volcanic Fallout—Terra Stomper I'm not worried about as much, since Into the Roil can bounce it—I think Mark of Asylum can be splashed for. (The two green one-drops make white mana anyway.)

Okay, get ready for some world(s) takeover!

World Queller is one of the interesting cards that, when you read it close enough, is hilarious. Perhaps you don't think of menacingly posed Avatars as laugh-inducing, but consider this: World Queller can make you sacrifice an instant. No, that can and will never happen, but it's still really funny. 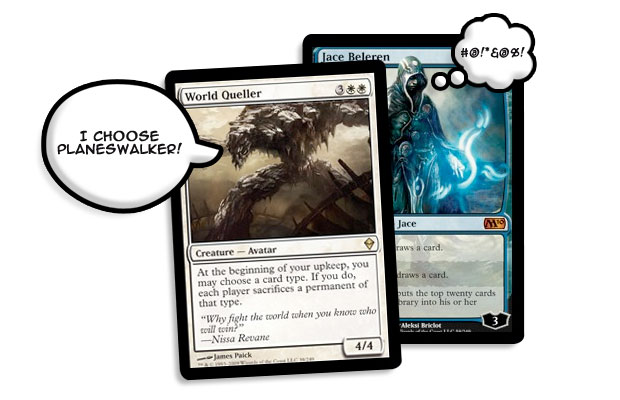 Despite disaster and hilarity, World Queller is probably the most efficient way to specifically off a planeswalker ... ever. No fuss, no muss. If that Jace Beleren staring you down from across the battlefield has a bit too many loyalty counters for your taste, drop a Queller and check for the shiver. The Queller is an instant threat, and will be targeted with any removal without a thought.

Let's go through the different things the Queller makes you sacrifice. We just covered planeswalkers.

Creatures: Obviously, if your opponent has a lethal army, the Queller will cut it down in no time. The slight problem is that if you don't have enough creatures, the Queller will off itself. So you need a way to get at least one guy on the board each turn. As perfect as Nissa Revane or Elspeth Knight-Errant are here, they happen to be the Queller's most prominent prey. I'll go with the Rhys the Redeemed.

Lands: The Queller becomes a ticking timer here, slowly eating all the board's lands. Players will have to keep up with land drops to soften the pain.

Enchantments: Here's where my deck starts to take shape. I'm going to pair the Queller with Paradox Haze. Now the Queller demands two sacrifices per turn. Imagine two lands eating it every turn. To retrieve my lands, what's better then the recurrable, non-permanent Life from the Loam? Of course, if your opponent has a problem enchantment across from you, you're going to want to kill it without your Haze suffering. Backup enchantments such as Aspect of Mongoose (ooh), Reality Acid (ahh), or Hatching Plans (damn) work. 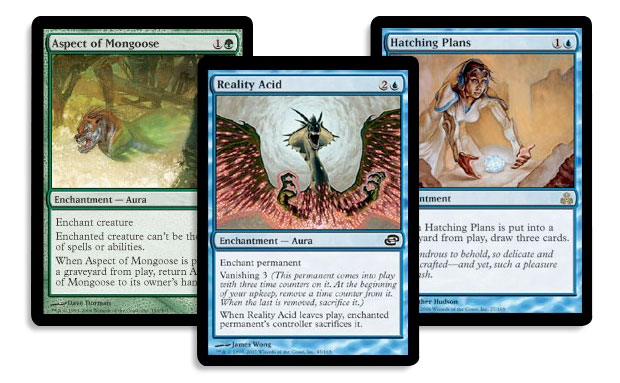 Artifacts: I'm not messing with this one. Just use this clause to off your opponent's Darksteel Colossus.

The goal is to use the Queller to settle the board down, then start blowing up lands. You'll eventually draw into a large Terravore, which can swing for a lot unblocked (thanks to the Queller mowing down opposing creatures—just remember to keep up with Rhys and Spectral Procession).

4 Spectral Procession 3 Life from the Loam 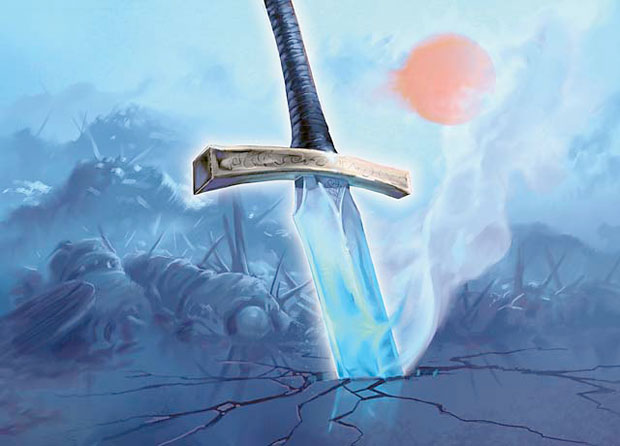 Follow my mental path to a flashback to my first pack of Mirrodin that I ever opened. Fingers trembling at the prospect of opening something incredibly cool from the first artifact-based set, I methodically reviewed each common and uncommon before checking out the rare. The most badass sword ever drawn was gleaming in from of me. And no, not Sword of Kaldra. I'm talking about Worldslayer, the first rare Equipment I ever opened. (I'm not counting the uncommon-at-the-time Loxodon Warhammer, which was also in that pack.)

Worldslayer was always puzzling. It remains among the most expensive Equipment ever printed (in terms of the costs of both playing and equipping it.) When I had finally gone to the trouble of paying ten mana to give it to my Phantom Warrior, everything would blow up anyway, leaving only the sword stuck in the ground.

Then, Darksteel came around and introduced Shield of Kaldra. Suddenly that Phantom Warrior was, for a burdensome eight more mana, able to stick around post apocalypse. (The Shield, which is itself indestructible, makes the Warrior indestructible as well, and Worldslayer doesn't kill itself.) Then I could just swing infinite times. My opponent can't do anything to stop me, as the one land he or she can muster per turn will be world-slain every swing.

Then, Fifth Dawn came around and solved all my problems (or so I thought.) Auriok Windwalker could bypass expensive equip costs, and even had evasion. Magnetic Theft made any one Equipment's equip cost simply

. The new problem was doing all this efficiently. By the time I had a non–summoning sick Windwalker and the two expensive Equipment in play, it was already at a stage in the game where I would be lucky to win.

Flash forward to Zendikar. Two new cards, Kor Outfitter and Quest for the Holy Relic, make this deck worth it again. Kor Outfitter is a creature I've been waiting to see in print for a while. It's basically an Auriok Windwalker, but with "haste" and much cheaper. Quest of the Holy Relic allows me to not run 4 copies of each Equipment and more creatures to equip to (which was always a problem in other builds.) Plus, the Quest both finds and equips Shield of Kaldra to your unblockable guy. Speaking of unblockable guys, Æther Figment is (as I mentioned back in my look at Zendikar's kicker cards) is far better than Phantom Warrior in this deck, being cheaper, potentially larger, and not sporting a double blue ( 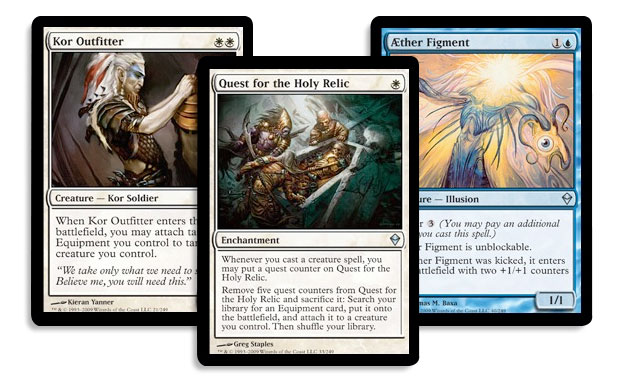 Going off on a bit of a different tangent for a second, let's talk Kor Outfitter combos. Any creature with an "enters the battlefield" effect like Kor Outfitter's is at least pretty good and synergistic. Whitemane Lion and Kor Skyfisher can let it reuse its ability to equip those pesky expensive ones.

Again, everything is up to your interpretation of my idea.

What Not To Wear

3 Quest for the Holy Relic

There are a lot of cards in there that can be played for just one white mana. This is for when Worldslayer has demolished everything. Dropping a Plains then gives you the opportunity to Path to Exile a blocker if your opponent comes up with one. Similarly, if your opponent musters a kill spell for your Worldslayer-bearing creature, Healing Salve (yup, Healing Salve) can protect it. (I'd love to talk about Healing Salve gaining you the 3 life necessary to stave off a last-ditch Lightning Bolt as well.) Kor Duelist is simply an early-game dude that loves to be equipped by something. Icatian Javelineers is a one-drop pinger, which is perfect.

Although swinging infinite times with a Shield of Kaldra'd, Worldslaying figment of Æther is surely awesome, I think the aspect of this deck I like the best is the following: It is one of the few (read: only) decks that would rather play the white "boon" (Healing Salve, considered the worst of the five Alpha "boons") than the blue one (Ancestral Recall, considered the best of them. And by them, I can also mean all of Magic.)

That's my cue for saying goodbye. I won't be around next Thursday (Turkey Day!) but you can be sure I'll return the following week, perhaps still gobblin'.