ello and welcome back to the Lab. This week it's officially Commander Week, although it's kind of been like that for a fortnight at least. This week I'll examine some actual commanders, instead of tinkering around with Martyr's Bond, Crescendo of War, Chaos Warp (which I'm very aware doesn't combo with Psychic Surgery. I thought "What likes it when my opponent's library is shuffled?"), and Stranglehold. 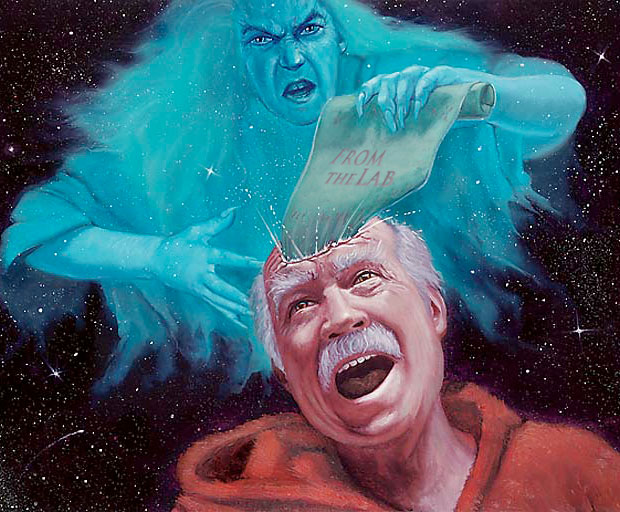 Speaking of the above miscue... I'm going to make an effort, starting this week, to explain myself more thoroughly in my deck descriptions. Sometimes (read: all the time) my deckbuilding train of thought runs right off the rails mid-column, and I don't always know how to pick up the pieces. It's part of my chaotic red-blue mindset, the constant battle between impulse and intellect. Y'all should see me actually writing this column. It's an emotional splicing of words from my mind to the page. It's tough to grapple with sometimes. That's why I took up yoga.

Magical yoga, of course. You think I actually want to sit in saunas for hours and bend my larynx into separate sections? No, I speak of Commander, the format. I've finally experienced it. It's nothing less than a mass exchange of magical energy between the folks in the game. There is no real winner or loser. There are big plays, huge rushes, and flavorful cut scenes (at least in my playgroup).

This week, I'm taking on three of my favorite yoga instructors. Get out your floor mats!

What can I say, I like headache-inducing one-word palindromes. Coming up with these stupid subtitles is lots of fun, by the way. It's a testament to how much I've been able to get away with. But I digress. 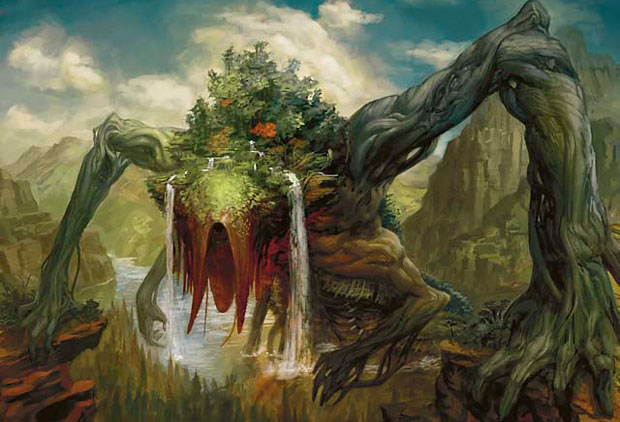 Animar, Soul of Elements is the tri-colored offspring of three different abilities, two of which work together quite well. The protection from white and black is the outlier, but it makes perfect sense, considering Animar is the other three colors. Nevertheless, it's the latter two abilities that I'm most concerned with. Reducing costs is a Magical pastime of mine, and Animar accomplishes this like potentially no other card. For every +1/+1 counter on Animar, creature spells are reduced by one colorless mana. And since there are ways to vastly accumulate these counters, this gets ridiculous fast.

At first I wanted to Cloudstone Curio to bounce some artifact creatures back and forth repeatedly, making Animar super-huge. That is, until the word "nonartifact" blared at me like a dump truck horn. Colored creatures it would have to be. If I wanted to go infinite, I needed a source of colored mana every time I cast a creature spell. Something like, oh, Tangleroot?

The weird Mirrodin rare gives me

for each creature spell I cast. With Animar reducing the rest, Haru-Onna became the bouncy creature of choice. Ping pong two Haru-Onnas from your hand, gaining

every time to pay and drawing through your deck. Eventually you'll draw the lone Painter's Servant (banned in Commander, but perfect for a 60-card Animar deck!), which you cast to make everything white or black. The souped-up Animar then rumbles in for the win. 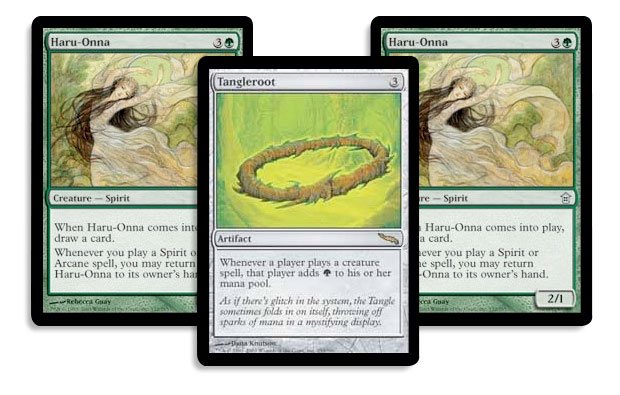 Although the Haru-Onnas could lend themselves to a Spirit/Arcane deck, I instead focused on Elementals. Smokebraider and Mulldrifter give the deck some juice. Among +1/+1 counter distributors, I gave the nod to Forgotten Ancient (perfect fit) and Hunting Triad (a versatile pet card of mine.)

We'll continue on to Ghave, Guru of Spores. Come on, Ghave. You're just asking for it. Cruisin' for a usin'. Five +1/+1 counters and a suitcase full of nutty abilities. Where to start? 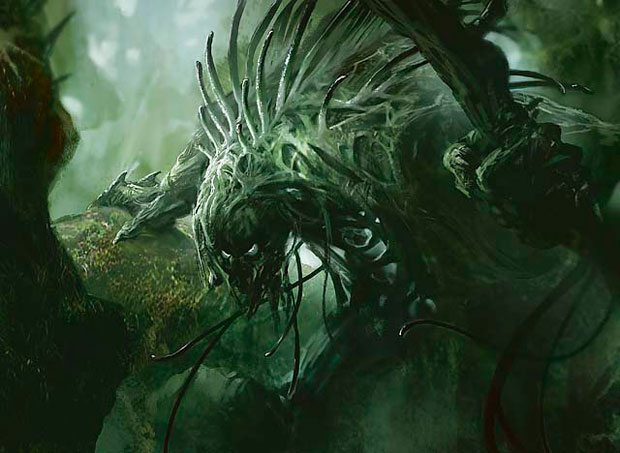 How about in my inbox? Reader Zachary Segall came up with a fine concoction concerning the Guru, and makes use of a New Phyrexia card that's been on my radar (and everywhere 'round the net) but never yet part of a Lab blueprint. Zachary wrote:

This deck is centered around Ghave, Guru of Spores and Doubling Season. With Ashnod's Altar, you can create infinite infinite/infinite creatures and infinite colorless mana: Pay 1 to remove a counter from Ghave, which creates two saprolings thanks to Doubling Season. Sacrifice one saproling for mana and the other to put two counters on Ghave. Ghave now has one more counter than he started with and you have one mana in your mana pool. You can repeat this process until Ghave has infinite counters, then use those counters to produce infinite saprolings and colorless mana.

Utopia Mycon can't do this, but it can produce an infinite loop of creatures dying/entering the battlefield. With Utopia Mycon, pay 2 to remove 2 counters from Ghave and create 4 saprolings. Sacrifice 1 to put back the two counters on Ghave and the other two to recoup the mana lost. With Soul Warden, you get infinite life. If you also have Sanguine Bond, the life gain kills all your opponents. With Fresh Meat, you get infinite 3/3's. The other cards either help ramp mana or find pieces of the combo. 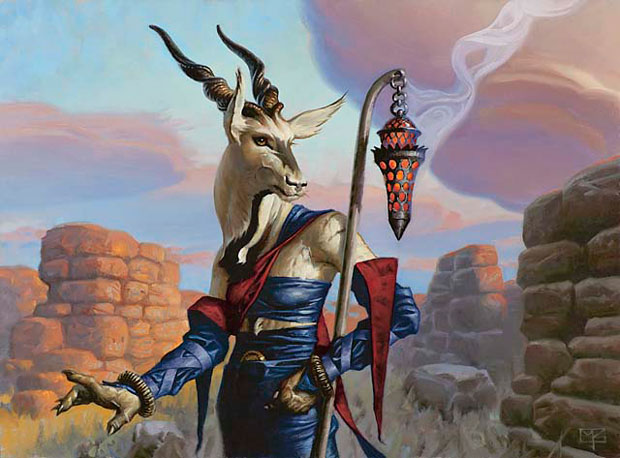 Back in the days of Alara, when armored rhinos were running amok, I couldn't stop saying the phrase "Rhino Soldier." What a fantastic juxtaposition of race and class. Even then, I wondered if anything could top it. Well, gents and lasses, meet the one and only Minotaur Monk. Zedruu the Greathearted announces herself with impeccable style. Look at that snide flick of her hand. Zedruu's either having an amazing trip, or just diluting the rest of reality with her pseudo-'60s getup.

Zedruu's card text is so bizarre, I'm not sure I have to end my running joke here. (Although for the sake of sane people, I shall.) I was hooked from the first line. Nothing explains why better than the line itself:

...come again? Permanents I own but my opponent controls? X life and X cards? At the beginning of your upkeep? And just for kicks, for

you can Donate over and over. Greathearted, indeed.

Where to begin? The first obvious strategy I see is giving away permanents that I can replenish over time, such as lands, or token creatures. I don't want to rely solely on Zedruu to give all my stuff away, though, so I added a healthy four copies of Bazaar Trader. Now my generosity can flow a bit faster. From there I looked up cards that naturally change loyalties. Vedalken Plotter offers a land swap along with an painlessly donated 1/1 body. Jinxed Idol was a great find. The Idol meshes well with token decks, as you can generate enough creatures to keep the Idol on their side. Of course, this crazy deck also wants to give my opponent tokens... hm. I went with two copies of the Idol, just in case. 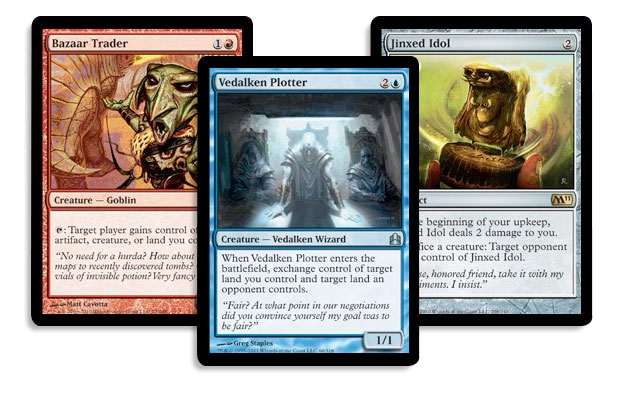 The most hilarious find was Loxodon Peacekeeper. A whopping 4/4 for two, this Elephant constantly takes the side of the lowest life total. Since I'm playing a bunch of the old pain lands anyway, I might get to swing with it once or twice. But once it eventually shuttles over to the other side, Zedruu will turn it into an extra life and card a turn. Sure, your opponent can whack you for 4, but then you might be in need of Peace. Mind games aplenty with this deck.

I said I was playing a token strategy, right? Icatian Crier can discard excess cards to make Citizen tokens on the cheap, and Cenn's Enlistment can assuredly be retraced forever once Zedruu is up and running. And what's stopping these newly traitorous tokens from attacking their creator? Reverence. Hmph. They had better revere me. Send them on the Homeward Path in a dire emergency. The Path restarts your entire progress, to be sure, but running one behind a sheet of breakable glass makes me comfortable.

Knight of the White Orchid and Coalition Relic make up the deck's mana fixing and acceleration. The Relic is an all-star card that slides into three-color mana-hungry decks like this one all the time. The Knight is there in case you give away more lands than you can afford. And it's pretty good in general.

All this and I have to win, too? I hate that part. I much prefer jumping through tons of hoops. It keeps me fit. Sigh... Bronze Bombshell, step right up! Maybe not the most original card here, but 7 damage per blow isn't anything to sneeze at. And at worst, you could go with token beatdown / Jinxed Idol lockdown.

Here's another Zedruu deck, because I adore this gal so much. This deck is a bit... high concept.

See, while brainstorming for the Greathearted one, I stumbled across Sky Swallower, and had a good old laugh. A classic reject rare of its day, the maligned Leviathan (one of many maligned Leviathans) generates more amusement than actual time in a deck. I've a feeling, though, that Zedruu might very well trade the world for such a pet.

Of course, you don't want Zedruu shipped off your to your opponent as well. That's why you send her on an Otherworldly Journey first. Come on, you think it's her first time on a spiritual sojourn? Let her chill in an eternal lava lamp for a while. Meanwhile, back in the physical realm, your 8/8 flyer has just SWALLOWED THE SKY. When Zedruu descends, you'll have accomplished your goal. However many permanents you gave away with Sky Swallower (ideally just lands or now-useless creatures with "enters the battlefield" abilities) will be the amount of life and cards you'll acquire from the Minotaur Monk's teachings every upkeep.

How to win, though, with no lands and facing a stocked battlefield? Zedruu will pad your life total and grip in no time, but neither of those zones leads to victory. Obviously, the 8/8 Leviathan should be Plan A. Let that monster off its leash. If that fails, the backup plan is Acidic Soil, an oldie but goodie. Let's think: you gave tons of your lands to your opponent (at least five, since you can send Zedruu on her Journey at the end of your opponent's turn). With four Acidic Soils in the deck, Zedruu wheeling you into them, and your three available lands (to cast them one by one), things appear to look up.

You can send Wall of Omens, Sea Gate Oracle, pre-ignition Venser, and Hammerheim Deadeye on mystic excursions as well. Remand and Lightning Bolt cover your tracks.