verything you feared is about to come true. For sixteen years, one card has haunted the dreams of players around the world. When it enters the battlefield, it induces sheer terror in the hearts of your opponents. With Vintage Masters soon to be released on Magic Online, the nightmare is returning. Of course, you always knew it would. 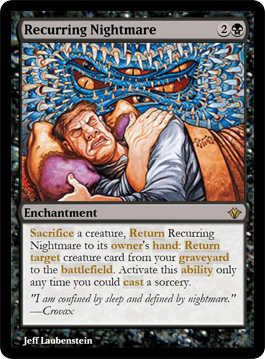 Recurring Nightmare has been a key part of several tournament-winning decks in its time. The most famous of these used Survival of the Fittest to search for creatures, discarding them to search for other creatures. Then Recurring Nightmare sacrificed and returned various creatures over and over again. Nekrataal killed creatures, Uktabi Orangutan destroyed artifacts, and Spike Feeder and Spike Weaver helped keep you alive.

Yosei, Can You See?

Although Recurring Nightmare can definitely generate a lot of value, I want to do a lot more than that. Therefore, I turned to Yosei, the Morning Star. This dragon has a reputation for being reanimated to lock down opponents, and Recurring Nightmare is one of the best ways to do it.

You'll need to end the game eventually, so I've included a rather appropriate win condition. Kokusho, the Evening Star will drain 5 life from your opponent each time you sacrifice him, ending the game in four turns. You can even swap him back and forth with Yosei, the Morning Star every turn to continue the lock at the same time.

Enlightened Tutor and Idyllic Tutor ensure that you can get Recurring Nightmare, and Entomb and Buried Alive put the creatures you need in your graveyard. There's still one piece missing, however. You'll need a creature you can cast to get started with Recurring Nightmare. I wanted something that could help you out until you get the lock going, so I included Banisher Priest and Fiend Hunter. Although the creature you exiled will come back when you sacrifice the guy to Recurring Nightmare, you can simply lock it down with Yosei, the Morning Star after that. I've also included Shriekmaw, which you can cast or reanimate if there's a creature you need to stay dead.

A Whale of a Tale

Another creature that combines quite nicely with Recurring Nightmare is Great Whale. If you have three lands and two copies in the graveyard, you can swap them back and forth indefinitely. A fourth land will let you produce an arbitrarily large amount of mana as well. With six lands you can do it with only one Whale and any other creature, and seven lands gives you infinite mana with that. Although it gets far fewer style points, Palinchron can substitute for Great Whale, since it has the same ability.

This time, the smaller creatures needed to start off Recurring Nightmare will serve as the win condition as well. Blood Artist can drain your opponent of all his or her life, whether being switched back and forth with the Whale or simply watching from the battlefield. The other card I'll use is Bloodrite Invoker. You'll need the extra land to make infinite mana, but once you do, you can cast or return Bloodrite Invoker to win the game. Even if your opponent has a removal spell, you can activate the Invoker seven times in response to end the game before it even leaves the stack.

Fact or Fiction and Forbidden Alchemy can get you the cards you need while dumping the rest in the graveyard, useful for getting those Whales ready to reanimate. Buried Alive is a more direct route to the same goal, putting two Whales and an Invoker in the graveyard to make sure the combo can get rolling right away. Meanwhile, Hero's Downfall can buy you time by killing troublesome creatures or Planeswalkers.

Perplex is an absolute all-star here. Not only can it counter spells, but it can search for most of the key cards in the deck. Recurring Nightmare, Buried Alive, Bloodrite Invoker, and even Hero's Downfall are all possible targets for transmute, giving you whichever piece of the combo you're missing.

It's time to battle it out and see which of these nightmares is the most terrifying. In the duel of dreams, there can only be one victor. Will dreams of Great Whales induce an Ahab-esque madness, or will the stars align for Yosei, the Morning Star? Let's go down to the arena and find out.

Nightmare Whale got to untap once before the lock was complete, but that was enough. A fourth land entered the battlefield, and Recurring Nightmare sacrificed Bloodrite Invoker to bring back Great Whale, untapping the lands. Recurring Nightmare traded Whale for Whale until the untapping land made a few million mana, then sacrificed a Whale to bring back Bloodrite Invoker and win the game.

The nightmare is over for now, but there's something even more sinister on its way. For some time now, a conspiracy has been brewing at REDACTED. I've been trying to pin down who's involved, but so far I've only identified one member: REDACTED. I can only hope my editor, REDACTED, isn't REDACTED. If you get this message, I need someone to go to REDACTED and look for a REDACTED. Everything I have on the REDACTED will be there. Once you have it, deliver it to my contact at REDACTED right away. He'll be waiting for you at REDACTED. Godspeed.