Zend of an Era

ello and welcome back to the Lab. On this last week before Innistrad previews, I feel like I'm teetering on the brink of a watershed of top-down Magic design. The set has successfully hummed with interest, although that could just be my supernatural hearing. I've always got Leyline of Anticipation on my personal battlefield.

Anyway, I realized a while ago that I would need a juicy theme to slide into this week every year. That's why, before the first preview week of each new fall release (or sometime around there), I like to dedicate a column to the block that rotates to make room. This year, it's Zendikar block. You can check out my previous farewells to Alara block, Lorwyn and Shadowmoor, and Coldsnap through the power of internet linkage if you wish. 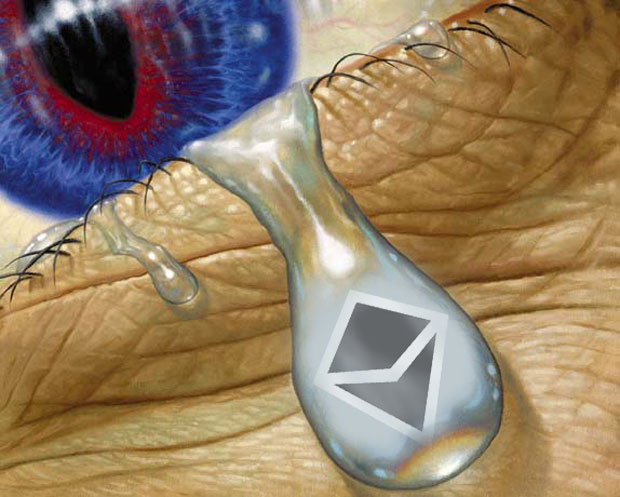 Zendikar may be rotating out of Standard, but I prefer not to equalize that statement to "forever banished from my mind." Although Standard intrigues me because of its inherent restriction, I ultimately choose to live in the infinite and far less stressful world of Casual.

But enough talk. Let's see what cards and strategies tickle my creative side from Zendikar, its follow-up Worldwake, and the plane-shattering Rise of the Eldrazi.

Zendikar came with the promise that lands would have an extra impact on game play, and this promise was delivered on via landfall, the flagship mechanic of the set. Worldwake continued the trend while riffing on it in subtle ways. While I admit I was hoping for some Dryad Arbor design space nuttiness during the block, landfall turned out to create some pretty wacky situations. 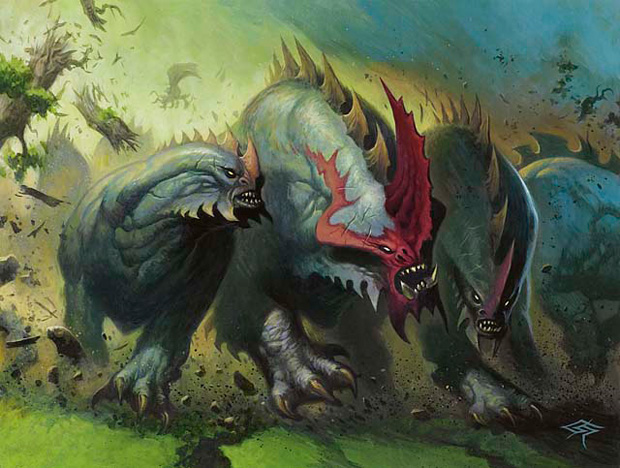 The first landfall card I laid eyes on was Rampaging Baloths, which filled me with dreams of bazillions of 4/4 Beasts. Khalni Heart Expedition is an exceptional mana acceleration card in dedicated landfall decks. Ior Ruin Expedition fulfilled the card drawing role at first, but Seer's Sundial ultimately outclasses it.

Where am I going with all these landfall cards, though? Thought you'd never ask. There's an idea I've been toying with for a while, involving a Johnny stalwart that never seems to get any reminiscence: Life and Limb. Juggle that effect in your mind for a while until you understand it. Every Forest is now a 1/1 Saproling, which is kinda cool. More importantly for this deck, all your 1/1 Saproling tokens are now Forest lands. Meaning Scatter the Seeds will trigger landfall thrice. Now that's an idea kernel.

I sprinkled other Saproling generators into the budding list. Jade Mage is an excellent new card that can slowly take over the game. Utopia Mycon is pretty great as well, able to sacrifice excess Saprolings for mana. Thelonite Hermit makes four at once, which could mean four Beasts as well. Sprout Swarm, I've come to decide, is a better singleton than a four-of in these sorts of decks. The convoke/buyback hybrid can generate an army by itself with enough prior tokens on the field.

The last piece is a splash of blue for Artificial Evolution. The beloved creature type hacker can warp the deck sufficiently. Hack the Baloths to say Saproling instead of Beast. Not only will this result in an armada of 4/4 Saprolings (love weird moments like that) but if you have Life and Limb on the battlefield, those Saprolings will also be Forest lands. Meaning, each 4/4 Saproling will trigger the Baloths ad infinitum. Since it's a "may" ability, you can stop the wheel after 117 rotations.

Otherwise, Artificial Evolution can hack Master of the Wild Hunt to make your army of Saprolings a bit more ferocious. Land acceleration rounds out this Life and Limb bent on landfall.

2 Master of the Wild Hunt
60 Cards

Another neat landfall combo revolves around the all silver-symboled Worldwake duo of Ruin Ghost and Tideforce Elemental. Both are decent build-around cards on their own. Ruin Ghost looks good alongside the "enters the battlefield" lands from these sets (particularly Sejiri Steppe, which turns the Ghost into a pseudo–Mother of Runes (Mother of Ruins?)), and Tideforce Elemental serves as an untap-happy Puppeteer.

Together, with the landfall powers of Lotus Cobra (to keep the engine going), you can assemble infinite landfall triggers. Tap a Plains for

and use it to activate Ruin Ghost, targeting the Plains. In response, spend

and use Tideforce Elemental to untap the Ghost. When the Plains comes back (untapped!), two important things happen: Tideforce untaps, and Lotus Cobra makes a blue mana. In this way, accumulate infinite landfall triggers. Many avenues to victory exist; Hedron Crab for infinite milling, Emeria Angel for infinite 1/1 Birds, Vinelasher Kudzu for an infinitely powered attacker.

On the subject of Tideforce Elemental and Bant-tinged decks, I recall a fun combo with another Worldwake card: Selective Memory, perhaps the telltale modern reject rare. Some wonder at this card's actual usefulness, but my thumbs were certainly sent atwiddling at this card. An interesting combo is to have Tideforce Elemental out alongside Skyward Eye Prophets. Then if you Selective Memory for all your nonland cards, you can cycle through your deck with the Prophets, generating blue mana with Lotus Cobra and untapping them each time.

Selective Memory makes me think of Treasure Hunt, which is a decent one-two card advantage punch. I also went with the thematic Mysteries of the Deep as some extra card-draw. In the end it's a green-white-blue hodgepodge of intersecting lands and landfall activations.

Before we leave Worldwake, there's another combo I'd like to revisit and update. During Multikicker Week I created a deck around Marshal's Anthem. Its aim was to ramp up to twelve mana and return four creatures with an Anthem: Riftwing Cloudskate, and three copies of either Cloudgoat Ranger or Sengir Autocrat. Target the Anthem itself with the Cloudskate, and then sacrifice everything to Phyrexian Altar for thirteen mana, gaining one mana for each iteration. 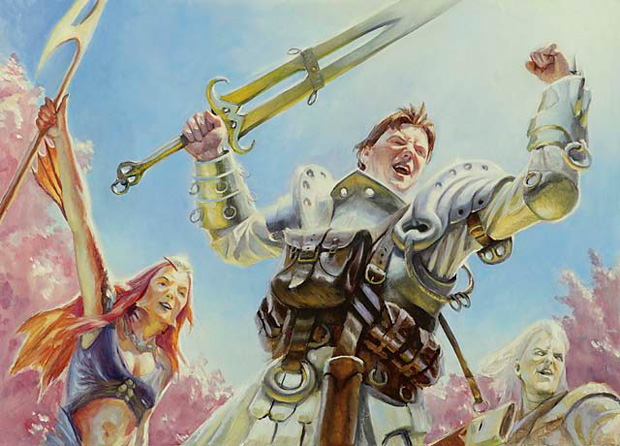 Since I built that deck, that process has gotten easier to accomplish. This is thanks to Myr Battlesphere and Hornet Queen, new innovations in token-making creatures, as they spawn four, not three. Only two of them and a Riftwing Cloudskate are required now, and ramping to ten is easier than twelve. The infinite mana can be funneled into either a Selesnya Guildmage or a Martial Coup (which doubles as mass removal in a pinch). Another method would be Bramblesnap (from Rise of the Eldrazi, of course) to tap all the creatures before sacrificing them to the Altar.

Last time I had Buried Alive to set up my graveyard. This time I'll go with Fauna Shaman to double as creature searching while ditching the token makers. Compulsive Research is a fine card draw and discard spell.

Rising to the Occasion

I'm a big fan of Rise of the Eldrazi. The set needed to deliver a unique experience, since it was positioned to be the end to the radical block design of Zendikar Block. Stuffed to burst with Eldrazi, Eldrazi Spawn, totem armor, rebound, defender matters, and level up, it was such an off-beat switch from the first two sets that I had to embrace it.

I was prowling the set on Gatherer when I came across Khalni Hydra and thought, "Maybe I should showcase my actual green chroma deck?" Chroma, for those unaware, is an ability from Eventide that cares about the amount of colored symbols in mana costs. And Khalni Hydra delivers a whopping eight—meaning that just one other Primalcrux on the field will be a 14/14 trampler. Fat beats a go-go! It's also fun to hoard Khalni Hydras and Primalcruxes in hand for a giant Phosphorescent Feast (the Future Sight edition, since I like me some weird-looking Magic cards.)

The rest of the deck is filled with green symbols from all kinds of mana costs. Overbeing of Myth is a huge part of the deck, doubling my card flow and providing five symbols. I figured while initially building the deck that it was a great opportunity to use lots of random green singletons, as long as they had tons of green symbols. I like playing singleton-laden decks (why didn't I get into Commander sooner???). Among the one-ofs, Garruk, Primal Hunter can do all sorts of woodsman magic, Nacatl War-Pride is especially funny with Primalcrux (yes, token copies have mana costs), Cloudthresher provides four symbols and destroys flying decks, Unyaro Bees makes me laugh and cringe at the same time (a lifelong fear of bees will do that), and a timely Nostalgic Dreams can change the game.

The deck needs lots of mana to work. Joraga Treespeaker (ring the theme bell!) is a superb one-mana Elf these days, and Gaea's Touch provides two symbols and a quick mana boost. When I'm in the right game-play environment, I swap out two Touches for two Land Aid '04. Unhinged cards don't always have the green light in casual, but I carry two around just in case. Displaying my catscratch vocals to the world is fun as well.

Hope you enjoyed this look back at Zendikar, Worldwake, and Rise of the Eldrazi. Next week we finally dive into Innistrad. Until then!