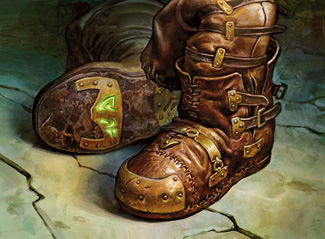 nd we're back with another episode of From the Lab! Last week I talked about all manner of Vampire-related cards, including and limited to Vampire Hexmage, Blade of the Bloodchief, and Blood Tribute. For many readers, I suppose this latter card and the deck I built around it really resonated. I received a good amount of email saying how much you liked the deck.

I looked at Blood Tribute again and saw not just a Vampire card, but one of Zendikar's many beastly and expensive spells with kicker. This is one of these mechanics that, in my mind, is one of the essential parts of Magic, because every other mechanic is really a version of kicker. As for kicker itself, I simply love what they've done to its reminder text. I've always thought that "If the kicker cost was paid," had about three too many syllables. And every time I kick a Torch Slinger, I don't pump a fist. I kick a fist. Yeah!

So today I'm going to go through all of the interesting new cards with kicker, and jump into a deck discussion if one seems worthy enough. Let's kick it!

Æther Figment: Having an unblockable on turn two is always nice, and in the late game it can grow into a 3/3, triple its earlier size. If this card has a niche somewhere, I'd say it would have to be in a Ninja deck. Use it on turn three to ensure a Ninja of the Deep Hours or a Throat Slitter hits its mark, and then play it back down as a bigger version!

Blood Tribute: I already covered this spell during last week's column. If you missed that one, here's a clue: Have an untapped Vampire and Sanguine Bond in play before you cast this!

Burst Lightning: All right, here we have a strictly better Shock! Of course, Lightning Bolt is that as well, so I won't complain. Especially when this card is so awesome! I always liked Shocking things, and I also always liked Flame Javelining things! Having both options on the same card makes me think positive thoughts, like lethally electrocuting a Zephyr Sprite.

Conqueror's Pledge: Ah, the first card on this list that has truly piqued my Johnny curiosity. No, tons of 1/1 tokens isn't exactly combo-tastic, but when the spell in question produces more little dudes for the same price as Cloudgoat Ranger, that's pique worthy. And that's without kicking it. If you reach eleven mana, you get a whopping twelve of them instead.

What card exists that can ramp me up to eleven mana in a reasonable amount of time while perhaps benefiting me in some other way? Is that a bit too much to ask?

The turn after you drop Gauntlet of Power (normally your sixth turn), you'll generally have six Plains on the battlefield. Tap all your Plains for twelve white mana and go for the big Pledge. You'll wind up with twelve 2/2 Kor Soldiers.

But wait, I want to pump them some more! I guess that's a good plan. How about with Armament Master, the Kor tribe's newest (and only) specific friend. A super amped version of Auriok Steelshaper, the Armament Master beefs your Kor tribe for each piece of Equipment attached to it. To reference another Mirrodin card, it's kind of like a global Loxodon Punisher.

What other Kor to use? Well, I am covering the kicker spells today, so let's call up the kicking duo of Kor Aeronaut and Kor Sanctifiers. What Equipment to use? In my mind, this is one of the better places for Grifter's Blade to thrive. Gauntlet of Power ensures you have enough mana, and having it enter the battlefield during combat is nice. If you spring it onto an Armament Master, it could be the equivalent of a Swell of Courage. Some expensive Equipment that doesn't often see the light of day could work here, like Heartseeker, Shield of Kaldra, or General's Kabuto. I decided to use a toolbox of Equipment, with Steelshaper's Gift to find them all.

I played a splash of green for Sigil Captain, who works like a charm alongside Conqueror's Pledge if you can't find a Gauntlet of Power. I also added some other expensive white token makers for the Gauntlet to help out. These include the extremely solid Decree of Justice and the board-sweeping Martial Coup. All the tokens that this deck makes are Soldiers, and this deck likes Equipment. Hello, Veteran's Armaments!

Elemental Appeal: You might think this card would have extreme appeal to me (pun intended.) You would also be right. With an exciting four red mana symbols (if only chroma could apply here!) and a crazily powerful and hasty creature smacking the opponent for 14, I like this sorcery. Even if it's not kicked, it still acts like a slightly bigger Ball Lightning. My suggestion would be to, instead of mustering up nine mana to create a fragile 14/1 (which could be easily ousted by any burn or bounce spell), simply copy an unkicked Elemental Appeal. Wild Ricochet could do it, as could Pyromancer Ascension (though the latter would take a bit of work.) I like Wort, the Raidmother here the best, as it gives Elemental Appeal conspire. Imagine a kicked and conspired Appeal!

Gatekeeper of Malakir: Definitely a favorite of mine amongst this list. Getting a Cruel Edict on a 2/2 body for

seems great in any mono-black deck. I wonder how a mono-black Cloudstone Curio deck would work. Getting the Gatekeeper and something like a Ravenous Rats to bounce each other could be fun.

Gigantiform: Ooh! This sparks some creativity within me. At first I thought this was a lot more broken than it really is, since I missed the "if it was kicked" line. "You can get all four with one!" I incorrectly thought. Still, this enchantment is a load of fun. It's unique in that, instead of giving something like +6/+6, it cuts through the middle man and just makes the creature a trampling 8/8. This creates a slight problem if you only had one creature on the battlefield. If you kicked Gigantiform at that time, both of them would go on the lone creature ... but it would just be an 8/8.

I made a simple green-blue deck revolving around this, but it just wasn't working out. My game plan was scattered and disorganized. So I went back to the drawing board and came back with this little-used card: Rabble-Rouser. By making this Gruul Goblin an 8/8, you can give your team of tokens +8/+0 on every attack. That sounds, um, fatal. And if you achieved bloodthirst, it would be a +9 bonus!

A similar creature here is Viridian Joiner. Suit it up with a Gigantiform, and it'll tap for 8 mana. Pair that with Staff of Domination to gain infinite mana, with which you tap down your opponent's creatures, draw into your other Gigantiforms, suit up your other creatures, and beat for the win. Oh, and gain infinite life, by the way.

Having an 8-power creature in play will do wonders for getting over Mosswort Bridge's restriction. And if you happen to have a Gigantiform hiding away, you can pay to kick it when you cast it for free!

Goblin Bushwhacker: Giving all your creatures +1/+0 and haste attached to a 1/1 body for

is actually really good. This seemingly bland common is, I believe, seeing some tournament play in red-white beatdown decks.

Into the Roil: I always loved casting Jilt, and while the 2 damage is missing from this blue spell, drawing a card is almost equally pleasurable. I think I'll be using this handy spell a lot.

Marsh Casualties: This is an interesting Infest variant. It's not as powerful, but it targets a player instead of the whole board. To make this clear to your opponent, make a Marsh Casualties + Saproling Infestation deck: "Okay, sweep your tokens ... and make a 1/1! YES!"

Rite of Replication: This was the card that made me throw a five-minute fit of insanity. FIVE TOKENS? On a card that is, at worst, a Clone?

A while ago, I received an email from reader Alex Churchill, known as alextfish on the forums. He let me in on the Rite of Replication + chroma combo, using Outrage Shaman as the example. In his words, "How about getting 5 lots of 12 red-mana-symbol damage?" Heartlash Cinder could be cool as well, as it turns into five hasty 6/1s at least. Other "enters the battlefield" creatures work well, like Alex's suggestion of Thundercloud Shaman: "It would give 30 damage to all non-Giant creatures, which is just as lethal if you have a Stuffy Doll out."

As cool as this is, I was worried about getting to nine mana. Gauntlet of Power can't help me as well this time. So I turned to another battlefield-entering chroma creature, Springjack Shepherd, who lays the pavement for Springjack Pasture. This land can potentially tap for nine mana and gain you nine life. Sure, you lose nine Goats, but when Rited, the Shepherd's copies will produce a whopping thirty more, minimum!

I began looking for Rite-able white-symboled creatures. Devout Lightcaster is a recent creature that absolutely hoses black decks. Imagine Replicating this in the late game against a Vampire deck! Thistledown Liege becomes a super Anthem for your Goats. Nobilis of War will give your attackers +12/+0, which is absurd. Next, I looked for Goats. Changelings fit the bill in the form of Mirror Entity and Avian Changeling.

The goal is to stall with Goats and Plumeveils until you can Rite a Shepherd, giving you enough Pasture mana to eventually Rite a Nobilis of War and beat for the win, or alternately cast a humongous Rise of the Hobgoblins.

3 Rise of the Hobgoblins

3 Puresight Merrow 3 Rise of the Hobgoblins

An alternate blue and white deck could seek to land a kicked Rite on Pride of the Clouds, then bounce the original with Narrow Escape and start forecasting Birds all day.

Sphinx of Lost Truths: I've been waiting for a new straight-up "draw three" creature since Arcanis the Omnipotent, and this one happens to be a 3/5 flyer. Kicked or not, this guy is fantastic. It works well in draw-heavy decks that need a finisher.

Unstable Footing: We'll end on a red card. Sure, this spell stops any protection shenanigans. More importantly, it's an instant-speed Lava Axe!