, it is a strange, feathery weight to bear, the plight of the lame duck. I know, and everybody knows, that these are my last quacks. But it is not so bad. Next week it will be bad for me, as I will transform from the lame duck into the dead horse. But for now, this bird has one last article in which to squawk, so away we go... 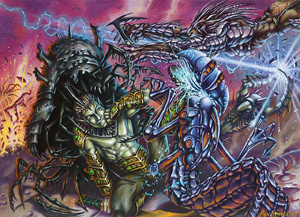 Last week's article confused some folks. Little details seemed to scream out louder than the bigger picture. I admit, the article was not my most well-crafted bit of writing. If it were, all the dates I threw at you and the legal issues I mentioned wouldn't have led to all the questions that were posed via email and the message boards. But, in a wonderful, Mr. Magoo sort of way, my blunder served to prove my point. After all, the point of last week's article was to tell you not only that my tenure as Taste the Magic host was over, but also that the new host would have a clear track, free of all the goofy hurdles I have been jumping for a year. Your new host will not be harried by the lawmages, nor will he be out of the office for extended stays in Ohio. Soon, it will be smooth sailing for all.

I was fully prepared to write this article as just a farewell to me / welcome new guy sort of thing. But my name hath been invoked here at magicthegathering.com and I feel like I need to chime in. In his article on the planeswalkers minisite, Mark Rosewater gave me an unexpected and gracious little plug regarding the inception of the planeswalker card idea. I was both surprised and pleased to see it. I did not want to bring it up myself, as that would have been a bit cheesy.

Not only would it have been cheesy, but it could have been disruptive as well. You see, I have been away from Wizards for a year now, and that means I have not been present at any of the meetings / huddles / sorcerous rituals in which plans were laid for unveiling the first major new card type since... well, pretty much ever. (Here's another thing that your new host will have that I have not—access. He'll be privy to all the current insider info that I have not been able to bring you for over a year.)

But you know what? A lame duck can have a razor sharp beak. In its last moments on the pond, the duck can lash out and get crazy without fear of future repercussions. Just look at how presidents squeeze through sketchy legislation and pardon their greasy pals all in their last moments in office. Now that the cat is out of the bag, I could duck-doo the whole planeswalker pond green, and dish out everything I know. But I won't. "Duck" is spelled with a "u", not an "i". I may not be en employee anymore, and I may not host this column beyond this very page, but I still care about Magic and I still care about the hard work my Wizard pals have put into presenting planeswalker cards to you. 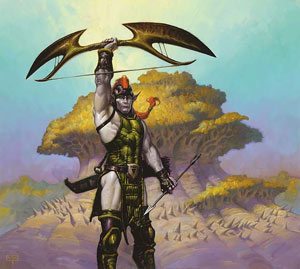 But you're still my peeps, and I won't leave you hanging completely. Here's what I can tell you about planeswalker cards: One of the very last things I did when I was still working at Wizards was work on developing the planeswalker card idea. Though there were other factors that influenced me as well, my main reason for pursuing the planeswalker card was you—you, the guy who loves all the fantasy trappings of Magic. I wanted to help create something expressly for you. I know that sounds corny, but it is true. Over the two years I spent working at Wizards I had grown to feel like I was one of your champions, a voice of Vorthos in an office of mostly Spikey wizards. You have other champions as well. At that time, I fought alongside Brady Dommermuth and Brandon Bozzi, carrying the Vorthosian standard into meetings / huddles / sorcerous rituals. As a member of the Future Sight Design team, I had the perfect opportunity to create something for the flavorphiles. But it was not so easy. Wizards is a company that puts great stock in innovation, but also one that holds tradition sacred. Big change is not waltzed into lightly. All alone, my voice would have been drowned out. But I was not alone. My creative team cohorts, Brady and Brandon, saw the potential of the idea immediately and lent their voices to the call. (Brady sports a sweet singing voice, vibrato and all, and Brandon regularly croons old standards at karaoke bars—nothing could stop us!)

The story of how it all came together is not a tale I can tell in its entirety. I hit the bricks for Ohio halfway through the process. Be patient; I am sure the story will not go untold. What I can tell you now is that, in my humble and soon-to-be-obsolete opinion, I think the planeswalker cards are going to be a good thing for Magic fans. I am aware of the fact that many of the tried and true Magic story fans have a fond connection to the old omnipotent planeswalkers, and that these new 'walkers replacing them are, well, not so omnipotent. I think we'll find that, in time, the new planeswalkers will win you over with their heroism / treachery / power / deceit / faith / love / vengeance and, of course, sweet sweet magic. After all, it is the stories behind the characters that are interesting, their motivations and their fears, not just the ability to squish whole continents. What is quintessentially Magic is not super power, but super range. Planeswalkers build their power through experience and through travel. The new planeswalking pals will win our hearts over time the same way the old ones did.

It is also my opinion that, immediately, there will be a greater connection between Magic players and the flavor of Magic. In the past, only the hardcore story fanes even knew which names on cards belonged to planeswalkers and which were just random dudes. Only the novel readers were treated to all the delicious flavor of planeswalkers. Now that is no longer the case. Now Magic's signature personalities will be seen macking for the cameras at Pro Tour feature matches. Now they will be in decks AND in books. Now the concept of planeswalker is not just for the really chocolaty goober, but for Magic nuts of all kinds. It takes the grand gulf between Magic's different realms of fandom and brings them closer together. It takes flavor and puts it out there in front. Isn't that what we've been trying to do here at Taste the Magic since day 1?

One other thing I'd like to add about planeswalkers is how the creation of the cards seemed to echo, within the walls of Wizards, the same purpose they were to have in the hands of Magic fans. Their creation involved members of the creative team AND design and development without one side overpowering the other. The Spikey developers and Vorthosian creatives worked quite well together. In fact, the mechanic for the planeswalker cards was born of a suggestion by creative teamer Brady Dommermuth, while the "there can be only one" flavor issue was solved in the type line by rules manager Mark Gottlieb. The team grows tighter. Everybody wins.

There's so much more to be said about the planeswalkers. There are reasons for their creation that are "bigger picture" than what I've talked about here. There are so many bits and pieces of tasty planeswalking flavor to be sampled. I am a bit sad that I will not be the one to bring them to you, but I am happy that they are now on the menu. 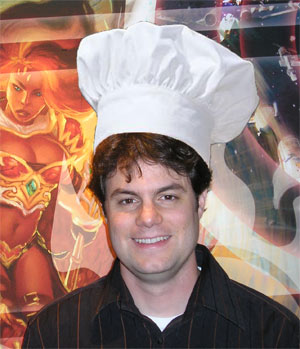 The person who will be bringing them to you is no stranger here at magicthegathering.com. I remember seeing at least one post on the message boards predicting that it would be this man taking over the Golden Spatula. You know him from his many, many gems of wordplay gracing both the top and (close to) the bottom of Magic cards. He's been writing names and flavor text for Magic since who-knows-when (long before I was hired by Wizards). He has written short fiction and feature articles for this site as well. He has been quietly bringing you small helpings of Magic flavor on a daily basis as the force behind Magic Arcana. And, most importantly, he has been working for the past year on the creative team, writing worldbuilding documents, developing planeswalker backstory, and managing the Names and Flavor Text process for all Magic cards. Ladies, gentlemen, and shapeshifters of all forms, Doug Beyer will be serving you your Magical delicacies from now on.

I have no doubt that Doug will do Taste the Magic proud. Doug joined the creative team a couple months before I left Wizards, so I had some time to work with him and see what sort of fellow would be taking over. We worked well together, our priorities and visions for Magic intermingling quite a bit. We teamed up on Future Sight, both of us overseeing the names and flavor text for the set. Though I was still technically the honcho, I deferred much of the final say on things to Doug. I was pleased to have butted heads with him on things exactly never, and we seemed to fall on the same side of hot-button issues. Of course, he was probably treading lightly, being the new guy and all. I am sure that, given time, he will carve out his own path with regard to his job and his approach to TTM. I look forward to seeing where he takes us in the years to come.

My very last quack is one of thanks. Thanks to all of you who have continued to tune in to Taste the Magic over the past couple years. Thanks to those of you who have contributed to the ongoing conversation in the message boards. Thanks to those of you who have emailed me to voice your opinion and express your passion for the game. I fed off of your passion, and it worked its way into my writing. TTM has really been a community endeavor. And thank you for the great outpouring of goodwill and wellwishes that I have received over the last week. They have dulled the pain and helped me keep my eye on the possibilities of the future.

Oh, and yes, there will be Magic art in my future. (Many of you asked if I was off the Magic scene completely. They can't get rid of me that easily. I am like a fungus.) There also may be a bit more playing of Magic in the future. If that is the case, then the future is good.