The back-and-forth that makes Magic fun is all about threats and answers. Ever since the days of Alpha, one player drops a Serra Angel and the other player has to suffer the righteous angelic beatings until he or she can find a Terror. And whether it's Alpha, Shadowmoor, or any Magic set in between for every threat in the game, there's an answer. For every Icy Manipulator, there's a Shatter. For every Calciform Pools, there's a Demolish.

Answers serve many purposes. First and foremost, they provide interactivity ensuring that every move has a countermove. Secondly, answers give you something to hope for off the top of your deck, a chance to draw your way out of whatever mess you get in. Finally, when you're building decks and evolving your strategies, answers give you tools you need to make your deck better for a certain matchup or a certain environment. When you start to get annoyed by your opponents doing something again and again, answers give you tools to use to defeat whatever has been annoying you.

Say you're playing green-blue against your friend's red-black deck in a Tenth Edition league. It's your second turn, and you have a Forest and an Island. Your friend has played tons of Shocks and Incinerates in previous games, and it has been almost impossible to make your turn-two creature survive. No matter what creature you have played on turn two, it has instantly died in a fire.

You think about all the green or blue creatures for one and two mana in Tenth Edition and there is nothing that survives Incinerate. No matter what threat you present, your friend's Incinerate seems to be the universal answer.

Then -1/-1 counters, Shadowmoor, and persist enter the story. All of a sudden you can play turn-two Safehold Elite, and your friend's Incinerate isn't nearly the universal answer it seemed to be.

In this bizarre "Tenth Edition Limited plus fourteen persist cards" format, persist would be so powerful and so hard to answer that it would threaten to get really annoying and cross the line to not playing well. After all, there would be very few ways to stop the persist creatures in that world, and it would get frustrating that there wouldn't be enough ways to get around having to kill your opponent's Kitchen Finks twice in a row.

Fortunately, persist didn't debut in Tenth Edition at all and is instead nestled in the dark realm of Shadowmoor. Why does persist have so much better game play in Shadowmoor Limited than it would in Tenth Edition Limited? In a word: answers.

Just as -1/-1 counters keep Shadowmoor creatures alive through persist, those counters also doom persist creatures to a painful, tortuous, true death through wither, Incremental Blight, Puncture Bolt, and many other hideous fates. Those -1/-1 counter effects provide powerful answers to persist that keep persist in a more interactive place, which is that sometimes your 5/2 persist trample Scuzzback Marauders powerfully trades with your opponent's 5/5 Crabapple Cohort AND 5/4 Roughshod Mentor... and sometimes your Scuzzback Marauders just get permanently killed by your opponent's two-mana Puncture Bolt.

So then is Dusk Urchins the ultimate answer? The top of the food chain? The unanswerable answer? Of course not. What's a great answer to Dusk Urchins? Good old Incinerate! And so the quest for the perfect answer returns to where it started. No single answer is the be-all and end-all. There's always another step down the path. 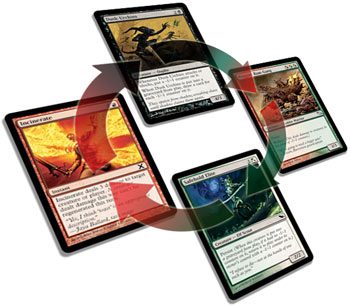 From Microcosm to Macrocosm

This phenomenon of answers to answers plays out on many levels. When you're playing with a casual Magic group Tuesday nights and Jeff starts beating everybody up in duels with his Tattermunge Maniac / Flame Javelin deck, then the next week you'll probably see people playing more protection from red creatures like Silver Knight. That week people get beat up a bit by Silver Knight, so the next week they start playing more Llanowar Sentinels and 2/3s. Then people see that and next week they play Serra Angels. Then next week people play Nekrataals to kill the Serra Angels.

That cycle provides a new puzzle to solve every week as you try to tweak your decks to work best against whatever decks you think your friends will be running. And that puzzle is part of the fun of deckbuilding.

The same phenomenon occurs in single matches of Shadowmoor Limited. Maybe you didn't start out maindecking Lockjaw Snapper, but in Game 1, you see your opponent is playing black-red with multiple Gravelgill Axesharks and multiple Scuzzback Marauders. You can sideboard in the answer, Lockjaw Snapper, to fight those persist creatures.

And the same phenomenon occurs in Shadowmoor Standard Constructed. Say you are playing green-red in Standard and you start out with Tattermunge Maniac and Bramblewood Paragon on your first two turns off of a Forest and a Fire-Lit Thicket. No matter what your opponent plays on his or her turn three, you plan to Incinerate it on your turn three and keep hitting. But your opponent plays Kitchen Finks! Your shoulders slump. Kitchen Finks is an amazing answer to your Incinerate plan there. The Finks gain 2 life for your opponent, and when you Incinerate them, they just persist back into play, gain 2 more life, and still block your Tattermunge Maniac.

But if this keeps happening to you for a couple of weeks, you can change your deck around to find an answer to the answer of Kitchen Finks. Then the next time this situation happens, you untap on turn-three, play a Forest, play Tower Above on your Tattermunge Maniac, and attack with everything. Your spell forces the opposing Kitchen Finks to block your 6/5 trample wither Tattermunge Maniac, you deal 6 damage to the opponent and kill the Kitchen Finks, the Finks don't persist back into play, and you lose nothing. You've answered the answer to your answer.

Answers in Standard Tournaments Beyond -1/-1 Counters

Condemn, Oblivion Ring, and other white removal effects that remove creatures from the game or put them into their owner's library give white a nice role to play in a persist world: the color whose creature control is the best answer to persist. R&D definitely intended that as a nice angle for white to have in Constructed formats that include Shadowmoor.

One of the things that keeps Standard tournament Magic vibrant and fun is the fact that you can find answers to answers far beyond the interactions of -1/-1 counters. They're woven throughout all the mechanics in the format, and you can find them if you look.

For example, players who got sick of declaring their attack with a vast army only to be tapped out by Cryptic Command have found that a timely Guttural Response consistently sent their whole army charging in for the win. In metagames where Shriekmaw has been the kill spell of choice, players who sought answers to Shriekmaw found them in Doran, the Siege Tower and Phyrexian Ironfoot, both of which shrugged off Shriekmaw's comes into play effect then outfought the Elemental for less mana. Players who got bludgeoned hard by Doran, the Siege Tower found powerful answers to the Siege Tower by playing Deathmark.

Creature decks have found they are far more effective against Faeries when they back up a low curve of cheap, aggressive weenies with Squall Line, Cloudthresher, Sulfurous Blast, or Firespout than when they don't bother to play enough of those answers. And just as Sulfurous Blast can answer Kithkin and Merfolk rushes, Kithkin and Merfolk decks in turn have found that Burrenton Forge-Tender can be a very effective answer to the Sulfurous Blast. Players who have sought powerful answers to an opposing turn-one Ancestral Vision have found success by answering with turn-two Riftsweeper.

I'm glad so many people agreed that we were right to print Gathan Raiders as is, even though it's a hellbent card you can play without any red mana. For those who voted "It's complicated," I definitely agree. It's always tough to navigate the maze of reasons for when you should break your own rules and when you shouldn't. Such cases often lead to lively multiverse discussions and ad hoc debates in the Pit.