The Big And The Massive

Posted in Latest Developments on April 16, 2010 he Rise of the Eldrazi Prerelease is this weekend. We've been telling you about the set for three weeks now, and tomorrow is your first chance to finally get the cards in your hands.

Truthfully, I'm as excited about this as many of you are. Magic developers have to work far into the future. Between the end of our work and the time you can get the cards, tons of things happen: art arrives in the mail, flavor text is written, card names are tweaked, card wordings are changed slightly, card text is translated and typeset, and cards are printed. These things all take time. Because of this, it's been so long since I played Rise of the Eldrazi Limited that going back to it feels fresh to me all over again.

This past Friday, many Wizards employees, including myself, visited Friday Night Magic tournaments across the United States. We brought with us some exclusive treats, the highlights of which were the five Rise of the Eldrazi intro packs. If you were at one of those stores last Friday, we hope you had an awesome time. If you were at a different store last Friday, maybe we'll run into you another time. If you weren't at a Friday Night Magic at all, you missed a rare chance to meet one of us in person and get a sneak preview of Rise of the Eldrazi.

I was assigned to visit Yottaquest, a store conveniently located in my hometown of Cincinnati, Ohio. I played tons of Friday Night Magic and other events at Yottaquest during my college summers, so I was excited to come back to my old stomping grounds. What I didn't know is that during my absence said grounds had become larger. The back room that previously served only as storage was now an extension of the play area, which on that particular night needed to be every bit as big as it was to hold the forty-five players that showed up to play Standard. The energy in the store was electric. Yottaquest is doing great things for gaming in Cincinnati, and if you're in the area I suggest you stop by on a Friday night and see it for yourself.

I began my first game at the same time that everyone in the Standard tournament played their first match. In an amusing coincidence, this was also my opponent Michael's first game of Magic ever. At a friend's recommendation, he had used our new online learn to play tool, then came to the store that night to play. I was the developer responsible for the content of both the most recent Learn to Play insert and the online Learn to Play tool, and I have built every intro pack deck since Alara Reborn, so I've done a lot of thinking about how to teach people to play Magic. I think he was fortunate to have his first game be against me, and I hope he would agree.

It didn't take long for Michael to pick up what was going on. He attributed this to the online Learn to Play tool, but he was one of the fastest learners I've played against. He was so fast, in fact, that he quickly piloted his red-green Eldrazi Arisen deck to a dominating position against my white-blue Leveler's Scorn deck. Neither of us could attack, but I knew that the long game favored him. Sure enough, when an onlooker pointed out that he could sacrifice his two Eldrazi Spawn tokens for mana, he sat up in his chair, tapped his six lands and a Dreamstone Hedron, and dumped a Pathrazer of Ulamog on me. The turn after that, he drew an Ulamog's Crusher and cast that too. He didn't have the context he would have needed to understand how remarkable the size of his creatures were, but that hardly dampened his excitement about attacking me with them.

I tried to put together enough creatures that I could chump-block and race his two Eldrazi, but on the last turn he took my fully leveled Caravan Escort with Conquering Manticore and attacked me with his pair of Eldrazi. That change of one permanent forced me to sacrifice all of my permanents rather than chump-block again and live, and I died ignobly with nothing on the battlefield.

It's quite rare that one's first game of Magic is against one of the few people who make the game, and rarer still for that first game to end only after reducing your opponent to zero permanents. Want to see what that looks like? Here's the picture I took from my side of the table.

In my second game, I piloted the black-red Invading Spawn deck against my very young opponent's Leveler's Scorn deck. We've told you about how slow and stately Rise of the Eldrazi Limited is, and that this facilitates playing big creatures—like, say, the Eldrazi—but it also opens up other long-game sculpted strategies that take a lot of mana. Black and red both have a lot of cards that create Eldrazi Spawn tokens, which help to make long game strategies work both by chump-blocking and by accelerating you to one-shot bursts of mana.

However, intro pack decks often take inspiration from strange places, and Invading Spawn is one of the stranger of this set's offerings. During our playtest drafts, I found tons of things to do with 0/1 creatures that weren't casting big spells. My favorite of these, and the card I built the entire Invading Spawn deck around, is Lavafume Invoker.

This card may not impress you on first read. However cards that don't impress immediately but turn out to be powerful are part of why Magic is such a fun game to explore. In the case of Lavafume Invoker, it's not difficult for a red-black deck to collect a large number of 0/1 Eldrazi Spawn tokens. It's also not difficult for a Rise of the Eldrazi Limited match to get to the point where you have six to eight lands on the battlefield. With a bunch of Eldrazi Spawn, a lot of lands, and a Lavafume Invoker, you can put out shocking amounts of damage.

Also note that you don't even need eight lands to pull this off. You can just attack with all your Spawn tokens, then sacrifice the ones that your opponent blocks to pay for what your lands can't. The ones that your opponent didn't block will still get through for plenty of damage, and you'll be a happy Planeswalker with a dead opponent. This trick, of course, also works in red-green decks, as green has plenty of Eldrazi Spawn creation as well.

Your opponent may decide not to play along with your schemes and kill your Lavafume Invokers before you can pull off an endgame coup. That's annoying, but not fatal, as the set has plenty of other ways to leverage a big pile of Eldrazi Spawn. If you're building a deck like this in Limited, be sure to include some of them!

I had some measure of advantage on everyone I played against that night due to my familiarity with the cards, and nowhere was that more apparent than when I was playing my second game of the night. By the time we got into the swing of things, players were finishing their first round and drifting over to watch me play and see the shiny new Rise of the Eldrazi cards in action. I accumulated a ton of Eldrazi Spawn thanks to two Emrakul's Hatchers and a Rapacious One. When my opponent tapped out, I suddenly dropped a Lavafume Invoker onto the table and attacked with everyone. It took my spectators a few moments to figure out what had just happened, but I knew that when their eyes all started to bug a little bit that my mission was accomplished.

In my third game of the night, I played the green-white Totem Power deck against the blue-black Leveler's Scorn deck. I don't remember any of the flow of the game, but I do remember this: 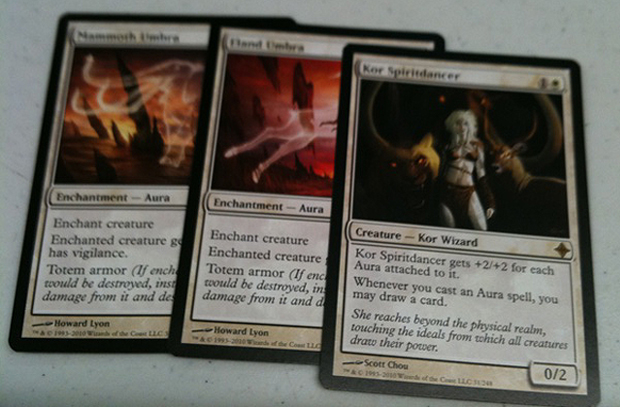 It took me and a few spectators at least three minutes to figure out how big this creature was. It wasn't until my third tweet that I actually got it right!

As the night went on, all the games I played began to blend together. Every game, however, had something big happen at the end. Whether it was a 9/9 colorless creature, a Lavafume Invoker–fueled attack for over 20, or a creature so loaded with Umbras that we couldn't figure out how big it was, the games were ending with something seriously massive happening.

It's almost like we meant for it to be that way.

Join us this weekend and you'll get to see it for yourself.

Posted in Latest Developments on April 16, 2010