he release of the first set in a block is always an exciting time for us. What will players think of the new block? Which cards will they latch onto? What will Standard look like?

Sometimes, a set's introduction goes well. Players adopt the new cards, and Standard has lots of interesting decks that use them. The new decks combined with last year's decks create a healthy mix of things to do, and everything is great. 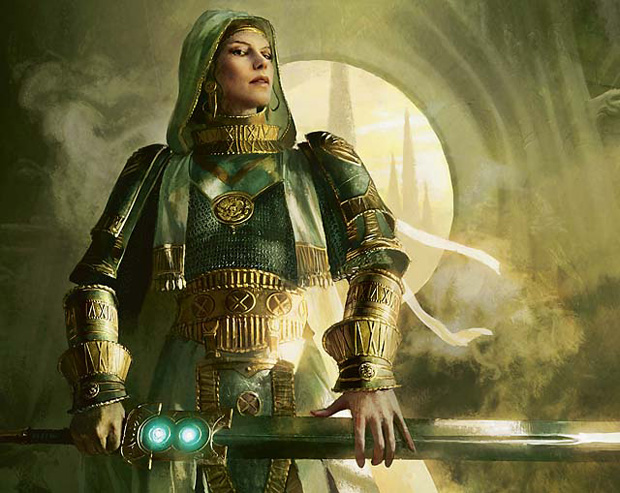 Other times, it doesn't go so well. Players don't figure out profitable things to do with all the new cards, and the word on the street becomes that the set is weak. Instead of the focus in Standard being on the new cool decks from the new set, the strongest decks are based on the previous block's themes. Then, things get stale more quickly because everyone has already spent time figuring out what to do with last year's cards, which are now the best things to do.

This can be especially painful when people want to play with cards and themes from the new set, but can't find a way to make them strong enough. We can often tell when this is happening by looking at data about what cards see the most play in the Casual Play room on Magic Online and comparing this to tournament results.

In the case of Scars of Mirrodin, the biggest place we've seen this is with infect. Infect has been a huge casual room hit. However, there aren't any black-green infect decks winning tournaments. Another place we've seen this is with proliferate. All six cards with proliferate are among the most-played Scars of Mirrodin cards in the casual room. Of these, only Contagion Clasp has seen tournament adoption, and that has happened more in Scars of Mirrodin-only Constructed than in Standard. This frustration can also occur with individual cards that beg to be built around. The most vivid example of this for me is Tempered Steel, which still reads to me like it's supposed to be awesome. We even seeded Steel Overseer in Magic 2011 to try to enable an artifact-centered aggressive deck. However, it seems that the density of aggressive artifact creatures just isn't high enough to enable this kind of strategy.

This is not to say that Scars of Mirrodin has no impact on Standard, because that's obviously not true. Koth of the Hammer, Elspeth Tirel, Argentum Armor, Ratchet Bomb, Sword of Body and Mind, Glint Hawk, Memnite, Arc Trail, and Wurmcoil Engine, and the dual lands have all seen play. However, their collective impact has been a little less than what we hoped, and there aren't any decks that are based entirely on Scars of Mirrodin cards.

Although we're a little disappointed with this, we're not tearing our hair out in worry. The biggest reason for this is that it's clear that Standard is still fun. The sets we sell are our main product by a strict definition, but in many ways Standard is the meta-product that encompasses all of our sets. If the easiest thing to do in large groups with Magic cards is fun, everyone keeps playing even if a set comes out a little weaker or a little stronger than we intended.

As for Standard right now, I think the red-green Primeval Titan / Valakut, the Molten Pinnacle decks are a little stronger than I might want them to be, but there is a pleasing variety of other decks strong enough to go 3-1 or better in Magic Online daily events. This, combined with the impressive attendance at third-party Standard open tournaments this fall and winter, has us confident that we did a good job with this Standard format.

Another reason we're feeling all right with the way things are is that we like sets to be open-ended. Magic is a game of exploration, and the question of "what do I do with this" is a big part of its appeal. We have often been accused of "building the decks for you" by making what to do with cards too obvious. That's a little bit unfair, as there are players out there less experienced than you who need more help with deck building than you do. Those players' experiences are greatly improved when they find things like Slivers, Allies, or tribal lords to build around, because otherwise Magic is too much to grasp all at once.

However, when it comes to Standard, we'd rather not have the best things to do be so obvious. Every day, hundreds of people play Standard in Daily and Premier events on Magic Online, and their deck lists get posted to the mtgonline.com front page. Every couple weekends, a few hundred people get together to play Standard for real money at third-party open tournaments, and those winning deck lists are posted too. Our formats need to be deep enough to stand up to that kind of scrutiny, and for this to be the case we need to have plenty of room to explore. Given the choice between the current status quo and having a set pop immediately in Constructed upon release but run out of new things to explore after two months, I'd happily take what we have now.

The last reason we're okay with how things are is that trying to make new sets pop immediately can often be worse than having it develop slowly. Imagine a world in which we front-loaded the strong Constructed cards that had to do with a block's theme in the first set. The set would come out with a mostly self-contained deck that was quite strong right out of the gate. Since it's already strong, we wouldn't have much room to print further powerful cards for it in the later sets of the block, lest it become truly dominant. Because we wouldn't add more cards to the deck, it would remain powerful and mostly unchanged in Standard for two years until it rotated out. That would get pretty stale, as by the time two years had passed most players would have had their fill of playing with and against it.

This is what happened with Faeries two years ago. The deck was essentially complete after Morningtide, and it remained the same in Standard until it rotated a year and a half later. We don't like that, and we'd rather a large set come in a little low in power than have this be the case.

There is good news, of course. The first good news is that "good enough" means different things to different people. Although much of the groupthink perspective on a given Magic set is handed down from the top pros, who write for various third-party websites, they live in a rarified world that most people never touch. When the pros talk about a deck strong enough to win a tournament, they're talking about Grand Prix and Pro Tours. If the highest level of competition you play is Friday Night Magic, then the meaning of "strong enough to win a tournament" might be quite different. If the best deck in a format at a Pro Tour level isn't particularly fun for people at your store to play, it's entirely possible that they just won't play it. It's also possible that the best deck for a Pro player to play is difficult enough to play well that it isn't the best deck for a Friday Night Magic player to play. A new but well-tuned deck based on Scars of Mirrodin themes may be just what you need to beat the players you'll actually play against on any given Friday.

The other good news is that there are still plenty of cards in Scars of Mirrodin—and other sets in Standard—that remain undiscovered. Because we build in lots of depth, there will be plenty of cards that have their Constructed debuts with much fanfare several months after they are released. Earlier in this article, I mentioned infect as a strategy that hasn't popped in Constructed yet. There's a green card from Zendikar block that we've found is the key to our infect decks, and I haven't seen anyone out in the real world play a single copy of this particular card in an infect deck yet. (It's not a creature pumping effect.) Don't fret, though—it took us a long time to find it too. In fact, it took us until "Action" was the most recent set in our playtest Standard environment. Our mono-green infect deck that includes the card in question has traveled to several events now with an impressive winning record. Perhaps one of you will find it, and it will be good enough to win you a tournament or two.

As I write this, the Standard portion of this year's Magic World Championships just ended. A little less than a third of the players in that tournament chose to play Red-Green Valakut, the Molten Pinnacle in Standard, but there were plenty of other decks around. There's also obviously room for innovation, as newly-inducted Hall of Fame member Brian Kibler took an entirely new deck to a perfect 6-0 start. We've been happy so far with the metagame we've seen at third-party open events, and the attendance has indicated that you are too. As always, thanks for playing.