Posted in Latest Developments on May 7, 2010

This past weekend, I had the chance to be part of a Seattle tradition called the Draft Extravaganza, a near-annual event put on by Tony Mayer and Eric Reasoner that is a full day of drafting different formats, some recent and others from long ago. We were to draft four different formats; the most recent was triple Lorwyn, and the oldest one was Urza's Saga block. The process of preparing the packs for the day was quite a sight. Here's what it looked like when they had just finished ... 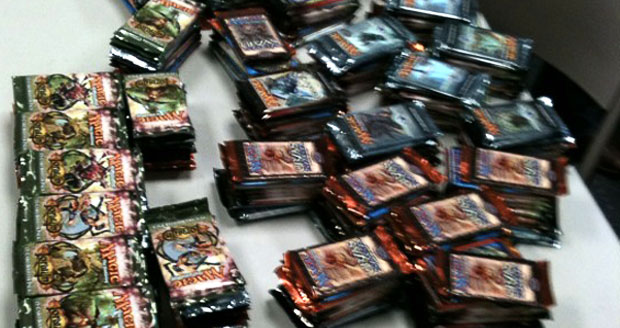 ... and here are the packs that I received at the beginning of the day.

I knew that I was going to have fun. What I didn't know is that I would walk away from each format having learned a little about making Magic sets. Walk with me through each format, and I'll tell you about them.

Triple Lorwyn was the last format I drafted in massive amounts before I started working for Wizards, but it had been a while since I drafted it. I ended up going back to my favorite tribe from then, which was Treefolk. I love a Battlewand Oak, and I ended up with three of them, plenty of other Treefolk, and some changelings to boot. The only annoying thing was that I only saw one Cloudcrown Oak, and there was a Woodland Changeling in the pack with it. I was very low on two-drops, so I took the Changeling and ended up with zero copies of the most important card in the Treefolk vs. Faeries match-up.

The thing that really blew me away about this format was how distinct different decks felt in play. There was a lot of mechanical pressure to pick a tribe and stick with it, but the reward you got in fun was worth it. The Kithkin decks were fast little beatdown machines with strong early game creatures. The Faerie decks had lots of flying creatures and instant-speed tricks. My deck was slow and plodding but powerful once it got going. My favorite thing about Constructed Magic is that match-ups between different decks can feel totally different in play, and some Limited formats don't achieve that. Even though my Lorwyn games were all about creatures, they all felt like me and my opponents were doing different things, and that's an impressive achievement.

The thing that frustrated me about this draft was that so few cards stood on their own. Tons of common creatures depended on other cards of their creature type that even taking an innocuous card like Cloudcrown Oak for an Elf deck felt bad. There are some days when I don't feel like drafting around a creature type. Lorwyn is a tribal set, so I shouldn't be able to have the most powerful deck possible without drafting around that, but I should at least feel like I have something to do that isn't totally embarassing. Lorwyn doesn't give you the space to do that, and I think it would be more fun if it did.

This format was a strange twilight zone for me. I'm used to Equipment being generally powerful in recent sets; Trusty Machete, for example, is one of the strongest uncommons in Zendikar Limited. Mirrodin and Darksteel are full of cards like Bonesplitter and Vulshok Morningstar that are quite comparable to Trusty Machete, and in Mirrodin and Darksteel those cards are common. This led me to take Equipment quite highly. I ended up with two Bonesplitters, Viridian Longbow, Leonin Bola, and Lightning Greaves. I made sure to have plenty of creatures to put them on, and I thought my deck was going to be good.

I'm still not quite sure what happened to me in my matches. My best guess is that my opponents had creatures that were stronger than mine before Equipment, and that put me on the back foot from the beginning of each game. Another thing that went wrong was that the quality of Equipment was so high that even if my opponent's Equipment were worse than mine, they were still pretty good, so the high picks I spent on having good ones were not wisely used.

The Ravnica block draft was a jarring experience for me. My favorite deck to draft in that format is base blue with tons of colors that uses card drawing and mana fixing to play the most powerful cards I see in the draft. I was in a draft with very savvy players, though, and they valued the mana fixing as highly as I did, so I had very few chances to take Izzet Boilerworks and Dimir Signet. I took them every chance I had, and still ended up light on mana fixing. Even weirder, my base blue-black deck only had one Ribbons of Night and one Train of Thought for card drawing. I'm used to having lots of Consult the Necrosages and Compulsive Research, but I never saw any. The deck I was trying to draft revolved around being able to get up on cards, and my deck had very few ways to do that.

I expected to have a miserable time because my deck didn't have enough card drawing, but I received a pleasant surprise and had a blast anyway. The reason I had fun was that all of the cards had more than enough time to do what they said they wanted to do. Ravnica Limited games are stately affairs that last many turns, so even the Tidespout Tyrants and Excruciators of the world will make their presence felt. The case in point for me was the Ratcatcher that was my best creature. I picked it up on a whim with no rats because I thought I would need a way to win long games. A 4/4 creature with fear for six mana isn't awesome, but I thought it would work well enough. Lo and behold, several times I cast that Ratcatcher on turn six, then attacked with it five times and won. Naturally, this feature meant that my opponents' better cards also had time to do their thing too, but I do think that this made the games more fun.

The dark side of Ravnica block is, as ever, how difficult it is to build functional mana bases for three-color Limited decks. Those who played Ravnica block starting with Ravnica and all the way through to Dissension had time to slowly learn how to build them, but many of the Draft Extravaganza players had never seen the format before, and many of them ended up with decks that essentially didn't work. That was sad to see, and I would not want another multicolor block we made to feel like that.

Many of the game's most famously broken Constructed cards came from Urza's Saga. 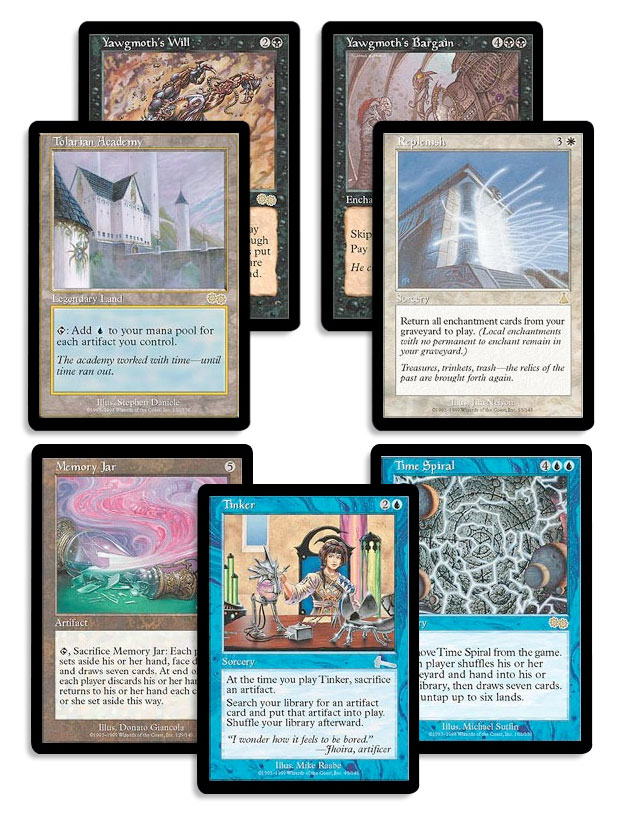 Cards like these are no small part of why many players were buzzing about drafting this format. It's not every day that you have the chance to open one of them, so this was a rare opportunity. Going into the tournament, I found Urza block to be the day's least exciting format, as I had never done it before and had no idea what I was doing, but that gave me the chance to take it in with new eyes.

The main thing I discovered is that the sets in this block felt unfinished. It's easy to remember Urza's Saga and Urza's Destiny for cards like Yawgmoth's Will and Yawgmoth's Bargain, which have costs that are just obviously wrong and distort constructed play. It is more difficult to remember them for cards like Pestilence and Sigil of Sleep, which have rarities that are just obviously wrong by modern standards and distort Limited play. Pestilence is a repeating mass creature kill effect, which is something we have decided shouldn't live at common. Sigil of Sleep is a bounce effect that happens to your opponent turn after turn. Both cards have the potential to ruin Limited games when they show up, and because they are commons, they do so quite regularly.

Just as modern Magic developers would never print Tolarian Academy, we also would never print such ruinous Limited cards at common. On the other hand, our designers' job is to give us cards and ideas, and they sometimes don't think about things like that. Urza's Saga block felt to me like a design file that had not been properly developed. It is full of good ideas, has fun mechanics, and also has enough simple cards for there to be things to do for people who don't buy into those mechanics. However, there are a bunch of cards whose costs or rarities look simply wrong to me. I'm confident that I could go through Urza's Saga block with only the ability to change mana costs and make rarity swaps and come out with a set that was much more draftable.

Regardless of that, it was oddly reassuring to see what happens when a modern development process is not used. If nothing else, it made me feel that my job was important!

Overall, the Draft Extravaganza was a ton of fun, and I learned a lot about both playing and making Magic. If you ever get the chance to do an event like this yourself, take it. You'll have a blast, and you might learn something too.

I am personally enjoying Rise of the Eldrazi draft quite a bit. Much like Ravnica / Guildpact / Dissension draft, it is slow enough that my cards all have time to do what they say they do. Unlike Ravnica block, it isn't full of powerful card advantage that turn lots of games into fights about who can get up more cards on the other person. I found Zendikar to be a fun change of pace, but it sometimes frustrated me that the format was too fast for some expensive cards that looked exciting. Rise of the Eldrazi has no such problem, and the sky is the limit for how expensive your cards can be.

Posted in Latest Developments on May 7, 2010